Being able to take food and drinks on the go and keep them cool has always been a neat convenience. But these days, when being able to check into hotels is not a given, it’s time to rethink the portable 12-volt electric cooler. It’s not just a cool luxury anymore, as much as it’s an essential part of your go-kit.

If you’re traveling by car, RV, or even boat, a reliable electric cooler is a must-have for long trips or journeys where you’re uncertain of your lodging options. Beyond food and drink, if you need to carry insulin or baby formula or any other climate-sensitive essential, a steady source of cooling is far superior to a regular cooler packed with ice or ice packs.

The two most common types of electric coolers are compressor refrigerators, which function much like a typical home refrigerator. The mechanism behind it relies on compressing a cooling agent or a fluid refrigerant to regulate the temperature, making it flexible to be used as either a fridge or a freezer. Thermoelectric coolers cannot freeze your food or make ice, but they can reduce the internal temperature to 40 degrees Fahrenheit below the ambient temperature. They’re considerably less expensive than compressor refrigerators, but if you’re going to be somewhere where the ambient temp is above 80 for a lengthy period, keep a close eye on those perishables.

Take a look at our favorite options below for your next road trip.

A great unit for the car, the Whynter FM-45G is a convenient electric cooler that helps you keep your food and beverages organized and cooled. There are two baskets inside of the cooler to help eliminate the need for you to play Tetris every time you open the cooler to get something out. It gets plenty cold dipping down to temperatures around zero degrees Fahrenheit. The thick walls ensure that your food and drinks stay cold too even if you have to unplug it for a bit. It is a bit on the heavy side weighting over 50 pounds and the handles aren’t ideal for carrying it a long ways, so car camping is probably your best bet with this awesome electric cooler. 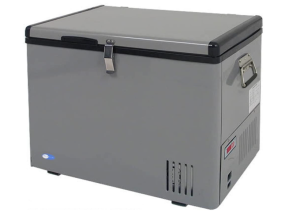 Koolatron is not the home planet of the late great backboard-smasher Darryl Dawkins (that was Lovetron) nor a great funk band. It’s a Canada-based company which has been making thermoelectric coolers for the past 35 years, and this is its most popular model. What we love about the Koolatron is the fact that, unlike most thermoelectric coolers, it runs equally well when placed horizontally or vertically. When you’re playing Tetris, trying to wedge it into a camper or a car full of stuff for a trip, that’s a huge deal. It also has only one moving part — the fan motor — which means way less chance of breakdown. The 29-quart capacity is ample, the 40-degree-cooling range and the ability to heat up to 145 degrees are both standout numbers, and the price is terrific. You don’t hear the Koolatron name all that often, but it’s well worth looking for. 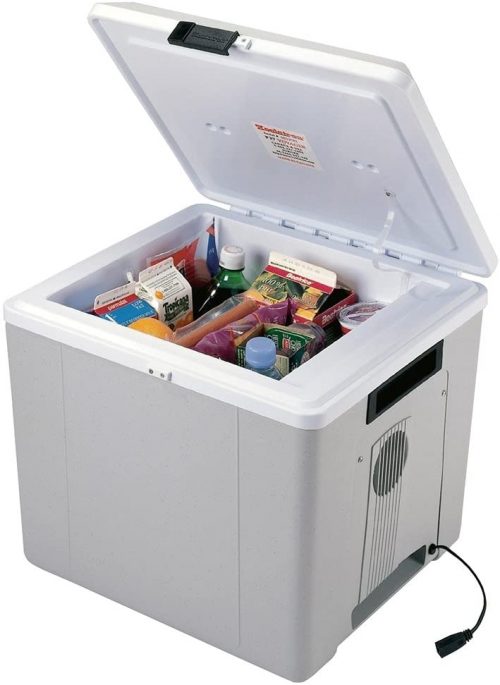 Igloo has been around since the 1960s — they know a thing or two about coolers. And Igloo created a convenient one with the 40 Quart Thermoelectric Cooler. It can stand upright and be used like a mini-fridge thanks to a handy side handle and shelf that can be moved and adjusted, or you can lay it down horizontally and pack it up like a standard cooler, the choice is yours. It dips down to 38 degrees below the ambient temperature, so if you’re out in the hot desert all day, you may want to keep an eye on any perishables you have packed in there. But for only $165, this is a smart and budget-friendly electric cooler. 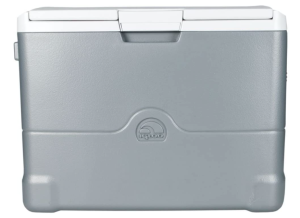 It’s hard not to be impressed by some of the cooling numbers provided by the Costway Portable Compressor Freezer. It can get all the way down to -4 degrees Fahrenheit and even has an eco-mode that keeps your food cool without guzzling power. Even though it’s efficient, that only rings true when it’s plugged in and running. It tends to get warm quicker than others when it’s not plugged in and it’s rather loud when in operation. But if don’t mind a little white noise while you’re out in the wilderness, this is a great electric cooler with a lot of capacity to boot. 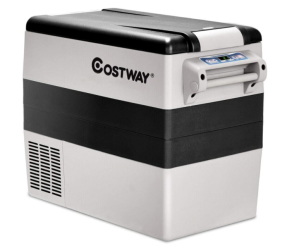 The 50 Quart capacity is as nice as the ability to plug this electric cooler in just about anywhere you need. The AC/DC power compatibility gives you more powering options compared to many that operate on 12V DC power alone. It has a decent cooling range of 0 – 50 degrees Fahrenheit as well keeping everything from beverages to perishables plenty cool. It comes with two baskets to keep your cooler nice and organized while maximizing space and has two cooling modes — max and eco — depending on your cooling needs. 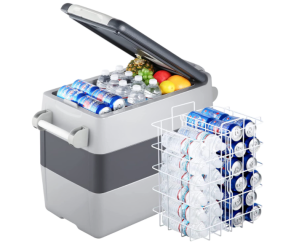 When you don’t need a ton of capacity, the Igloo Portable 28 Quart Iceless Cooler is a great car camper cooler that doesn’t hog up precious space in your car, but keeps your drinks nice and chill. It uses your cigarette lighter (12V DC) in your car to keep the contents inside cold and can cool down to 36 degrees Fahrenheit below the ambient air. Considering its cooling capabilities, it’s not ideal for hot weather ventures or perishables. Think of this as an efficient and iceless way to keep those camping beers nice and chilly. 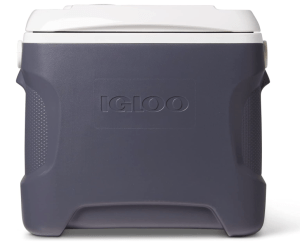 Need a cooler to chill a few beverages before a night out car camping? The Wagan 6 Quart cooler is small and lightweight enough to cool down your drinks and be portable enough for you to carry it to your destination from the car. It even comes with a little strap that helps you carry the cooler. With two built-in drink holders, you can crack a couple of beers and conveniently place it right in the cooler’s cup holders and still have close access to more beverages. It gets down 36 degrees below ambient temperature and even has a heating function that can heat up the enclosure up to 140 degrees. Not bad for $70. 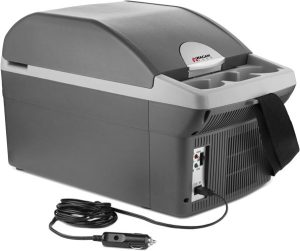 The Coleman PowerChill is like a mini-fridge that’s ready for camping. It can sit upright with a handy shelf inside of the cooler that can be moved in a few different positions or you can remove the shelf and let it sit horizontally like a standard cooler. Either way, it can get 40 degrees colder or warmer than the outside temperature and hold up to 40 quarts, which equates to 40 cans of be… or soda. (RIP Chris Farley). 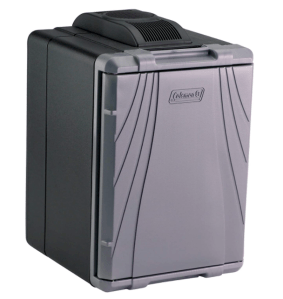 Although it has a hefty price tag, the LiON X40 cooler definitely has its advantages over other electric coolers. Mainly, it cools using a rechargeable 173Wh lithium-ion battery and can be recharged via AC, DC and even solar panels. The battery lasts about 10 hours before it needs a recharge and it can keep your food anywhere from zero degrees to 32 degrees Fahrenheit. And the digital panel makes it extra easy to control. Speaking of easy, the handle and wheels make it extra convenient to carry around. It’s pricey, but man is it convenient. 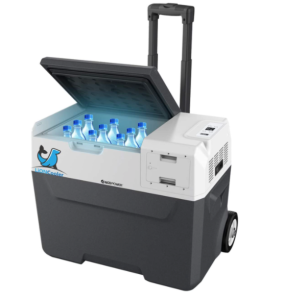 With over 1,000 reviews and 4.3 stars on Amazon, the Lifestyle Electric Cooler has made a lot of car campers plenty satisfied. It does so by keeping food and beverages at a nice refrigerated temperature of 40 degrees Fahrenheit and can be powered by both AC and DC outlets thanks to two separate available power cords. It even has a set of small wheels on the bottom making it convenient to move around. And the 48-quart capacity allows you to pack in about 60 cans worth of beverages. 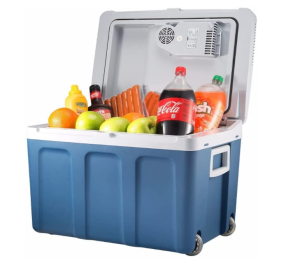 This AstroAI cooler will not give you days’ worth of frozen food. But it’s nearly one-tenth of the price of other options, and if you’re looking for an electric cooler for an overnight trip or even to just ferry dairy and perishables home from the supermarket on a scorching day, it’s a great find. The cooler body holds temperature so well that it maintains ice-cooled temps for a day even without electricity, but when plugged into your car or boat’s 12V outlet, it keeps the inner temperature up to 32 degrees below ambient temp.

It does come with a few disclaimers, though. First, do not plug it into the 24V lighter outputs found in heavy-duty vehicles. Second, don’t overpack it so you crowd the vent fans built into the lid. Finally, be sure you do not keep it plugged into your car when the engine is off because it will drain your car battery. But a light-duty electric cooler for $86 is a sweet deal when you consider that a Yeti cooler that is 12 quarts smaller and has no electric assist is over twice the price. 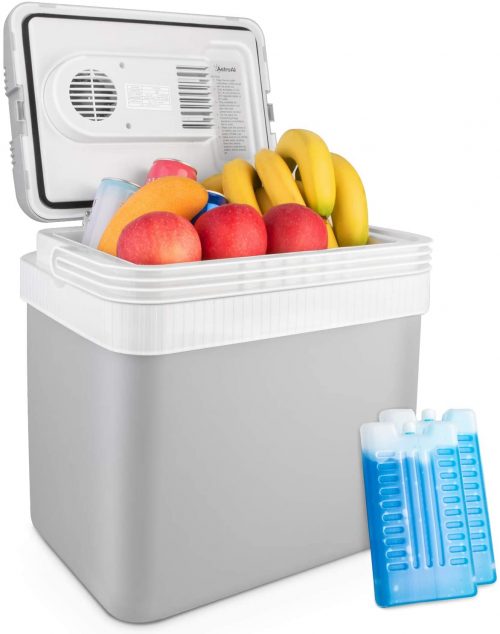 The Best Coolers for Keeping Drinks and Food Cold, No Matter the Location