If you were anything like us, you spent most of 2020 cooking more than ever before. And whether you’re an experienced home cook or someone who stumbled into a new hobby, you maybe also realized that your kitchen could use some upgrades. Well, there’s no better place to start than to pick up one of the best induction ranges.

The best induction ranges combine two of our favorite types of tech-forward kitchen appliances, induction cooktops and convection ovens, and Frankensteins them together into the future of cooking.

Induction cooktops transfer electromagnetic waves from a metal coil to your cookware, and only the cookware generates heat, making this a precise and efficient method of stovetop cooking.

Convection ovens take your traditional electric oven and add a fan into the mix which helps to circulate the heat around your food, making it heat, brown and crisp more evenly. This is the same technology that air fryers are based on, and as a result, you’ll now see many convection ovens advertising their ability to air fry.

As part of an induction range, you’ll typically end up with features that look something like this:

Now that you’re familiar with what makes the best induction ranges so great, keep scrolling to see our top picks.

Of all the best induction ranges mentioned on this list, the GE Profile Slide-In Induction Range is a 30-inch model that has nearly everything you want, and nothing you don’t want, at a price that is palatable. With burners ranging in size between six inches and 11 inches and generating as much as 3700 watts of power, you’ll have all the heat you need to expertly sear a steak. But this induction cooktop will also give you enough precision control to simmer a delicate glaze with the 100-watt warming element. The oven meanwhile, has a respectable capacity of 5.3 cu. ft. and the ability to air fry and deeply crisp your food thanks to the convection fan it features.

But what really makes this the best induction range are the little features. Touch controls are laid out in a thoughtful and intuitive manner. The two 8-inch burners can be synced to form one large burner for griddles and oversized cookware. There’s an included probe thermometer which not only lets you keep a close eye on the temperature, but gives you the accuracy to cook foods sous vide on the stove without an immersion circulator. And this GE Profile Induction Range is ready to integrate with your smart home, which means that you can link it up with Google Assistant, Amazon Alexa or your smartphone and control this induction range remotely (especially helpful for checking if you’ve left the oven on). And considering that it comes from one of the best appliance makers around, there aren’t many reasons to not want this induction range. 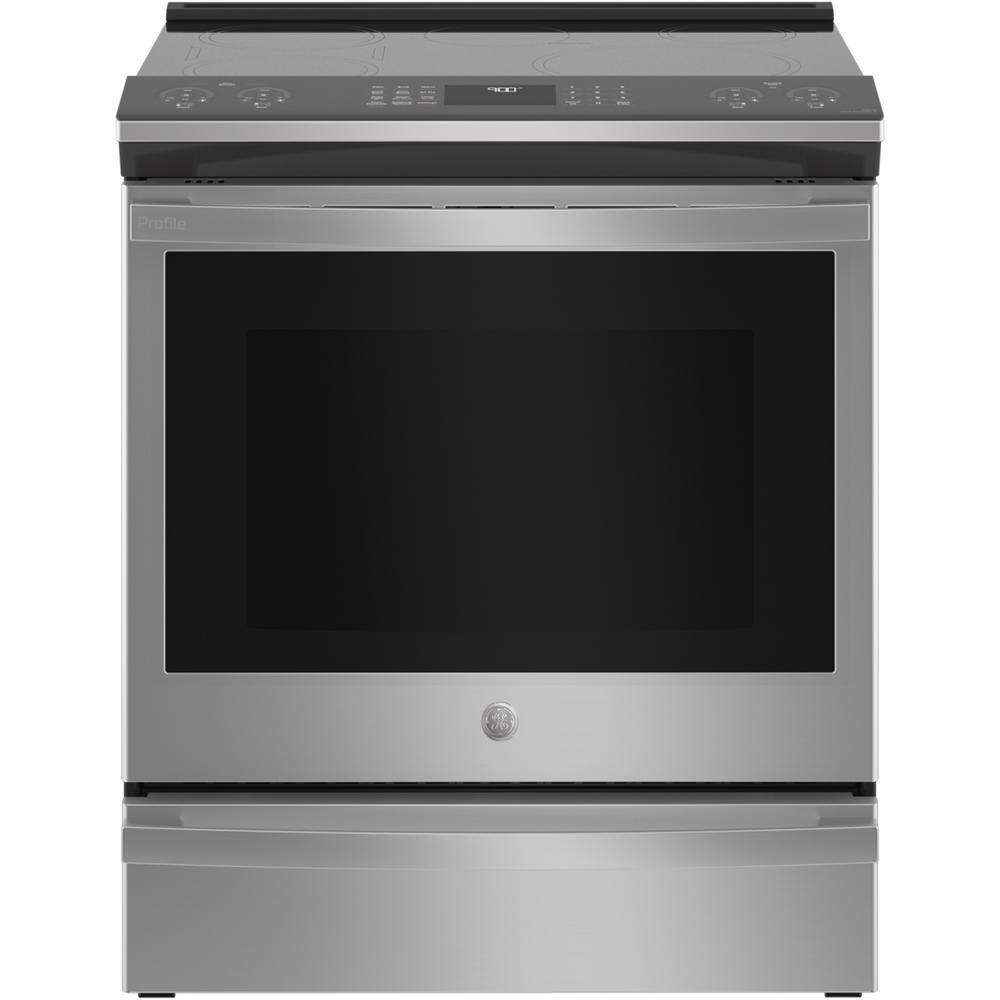 While the GE Profile has nearly everything you’d want from an induction range, there are still a few reasons why you might want to consider another of our best induction ranges. One big reason is oven capacity. While the GE Profile has a decent capacity, it simply doesn’t compare to the 7.1 cu. ft. provided by the KitchenAid Slide-In Induction Range, which is nearly two extra cubic feet of space. This could go a long way towards fitting an extra-large turkey during Thanksgiving or efficiently cooking for a big group.

Oven capacity aside, this oven has many of the same key features as the GE Profile: four burners ranging in size from six to 11 inches (and with up to 3600 watts of power), the ability to sync/bridge the pair of 7-inch burners, a temperature probe and a convection fan in the oven. And while this model may not have a warming element or WiFi connectivity for remote monitoring, it does come with a separate warming drawer for keeping side dishes up to temperature. 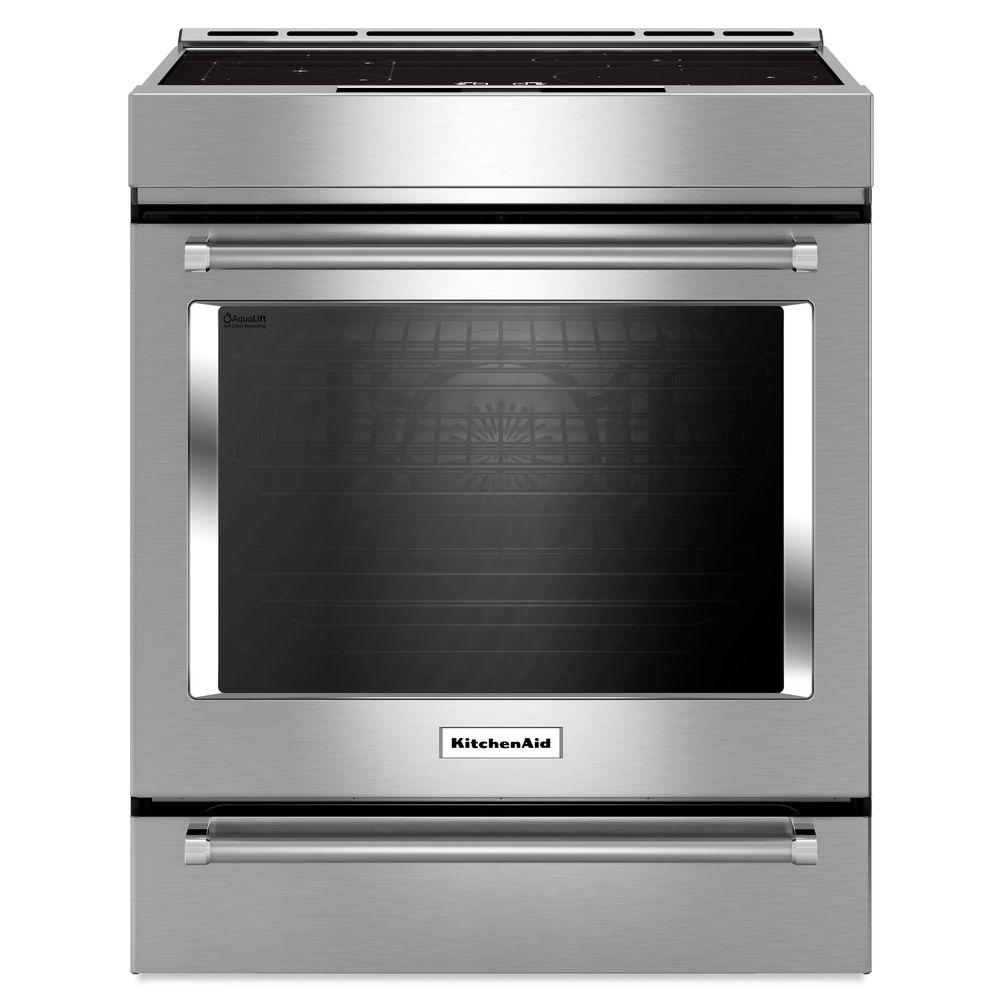 Considering the price relative to most of the best induction ranges, the Frigidaire Gallery Freestanding Induction Range has all of the core functionality you could ask for and even manages to offer up a few unique features of its own. In addition to a four-burner induction cooktop that includes a 9-inch burner for tasks like searing meats and boiling large pots of water, this 30-inch standalone unit also has a convection oven with a respectable spacious 5.4 cu. ft. of space to bake, roast and broil to your heart’s content. This isn’t any ordinary convection oven, however: The convection fan in this induction range has been ramped up so that the oven can function as an air fryer, getting your favorite foods nice and crispy without the use of oil. While this may not connect to your smart home or have features that cater to pro chefs, the bang for your buck factor here makes it one of the best induction ranges you can buy. 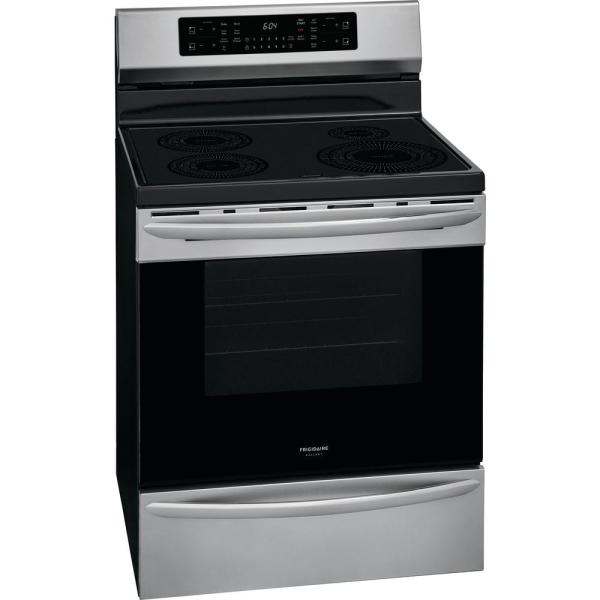 There are many standout aspects of the LG Studio Slide-In Induction Range, which includes ProBake Convection that adds a dual-speed fan and the ability to automatically spruce itself up with the 10-minute EasyClean cycle. But perhaps the most striking thing about it is its visual appearance, which is one of the perks of falling under LG’s top-of-the-line Studio branding. With sharply defined lines all over its stainless steel facade, this oven would fit in with the decor of any kitchen with modern sensibilities.

But there’s also function to go with this form. The oven has a very generous 6.3 cu. ft. of oven space and a separate warming drawer to go with the aforementioned ProBake and Easy Clean features. Meanwhile, the induction cooktop includes a large 11-inch burner that can handle all your high-heat needs and a warming burner that is designed for sauces, liquids and anything else you can think of. Best of all, this induction range is WiFi-enabled, which means that you can link it up with the rest of your Google Assistant or Alexa smart home to remotely control the oven from another part of the house, or receive notifications when your oven is malfunctioning. 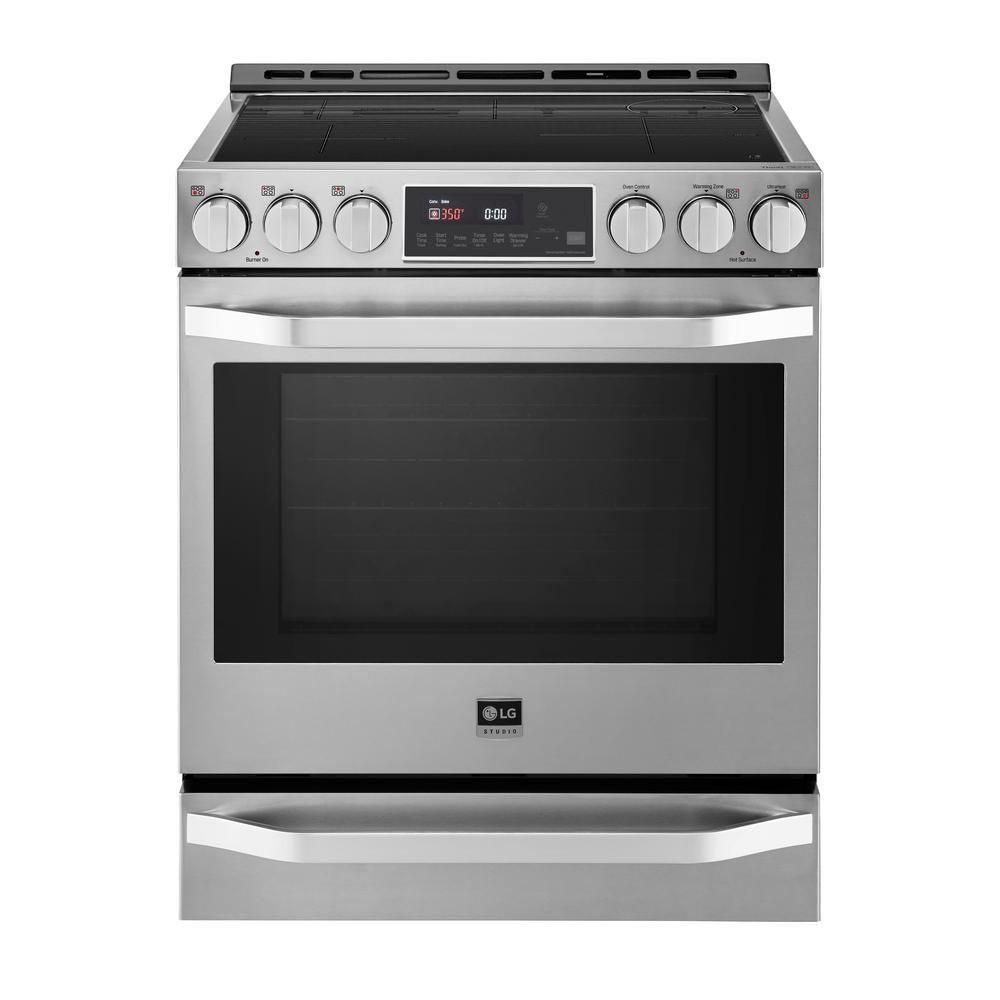 If you’re the type of person who can bang out restaurant-quality five-course meals in their sleep, then the Bosch Benchmark Induction Slide-in Range is the 30-inch induction range you should have your heart set on. While the 4.6 cu. ft. oven is a bit on the smaller side, it’s the induction cooktop that is the star of the show. While it technically has four induction burners ranging in size from 6 inches to 11 inches, the two 6-inch burners are positioned so that they can join forces and create one big 16 x 9-inch surface. Dubbed FlexInduction, this feature is amazing for accommodating pots and pans which are oversized or oddly shaped. Adding to the advanced features are an integrated temperature probe to check the doneness of your food as it cooks and 17 different levels of temperature control for the stove, and you have the building blocks for one of the best induction ranges you can buy. 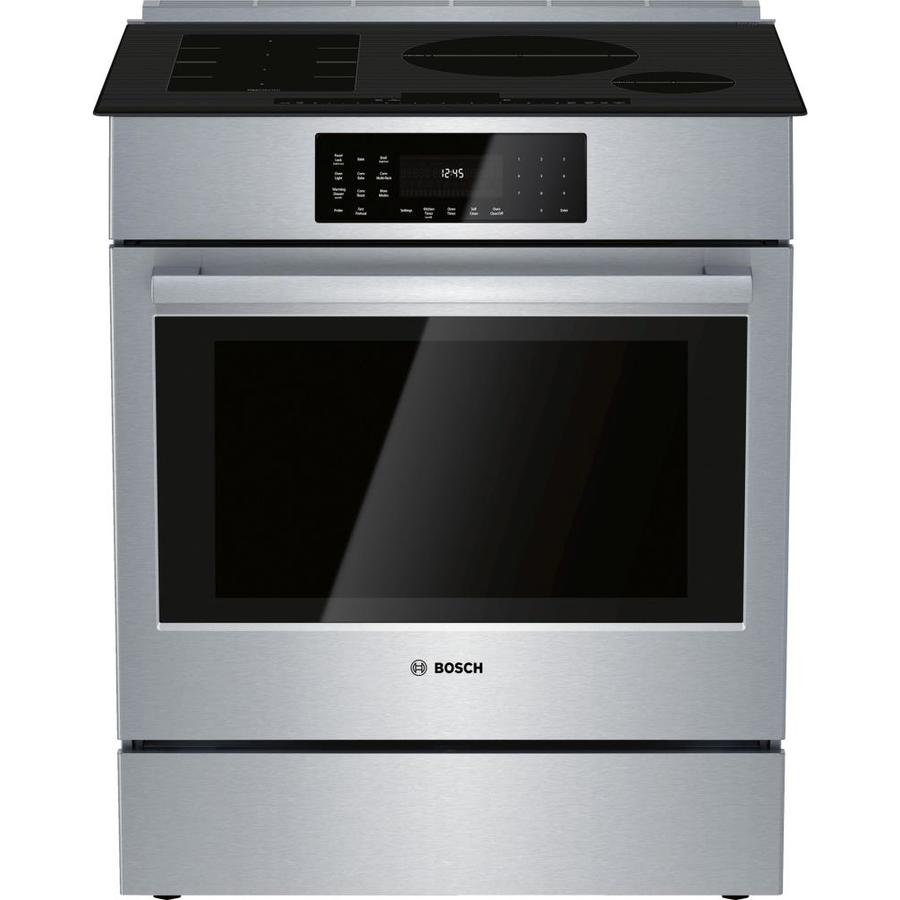 One of the perks of an induction cooktop is that the magnetic waves silently and invisibly cook your food, and the glass top itself doesn’t have to be heated in order to heat up the cookware. But this can make it easy for people to forget, or not be aware of the fact that food is cooking, leading to a painful burn. To remedy this issue, the induction burners on the 30-inch Samsung Slide-In Induction Range shine an LED on your pots and pans to make it look like a gas flame, providing a subtle reminder that you have hot items on the stove.

Along with this bit of safety genius, the rest of the features make Samsung’s induction range a well-rounded product worthy of consideration. With an edge-to-edge cooktop, WiFi connectivity, a warming drawer and a 5.8 cu. ft. oven with dual convection fans, this induction range packs some serious functionality. 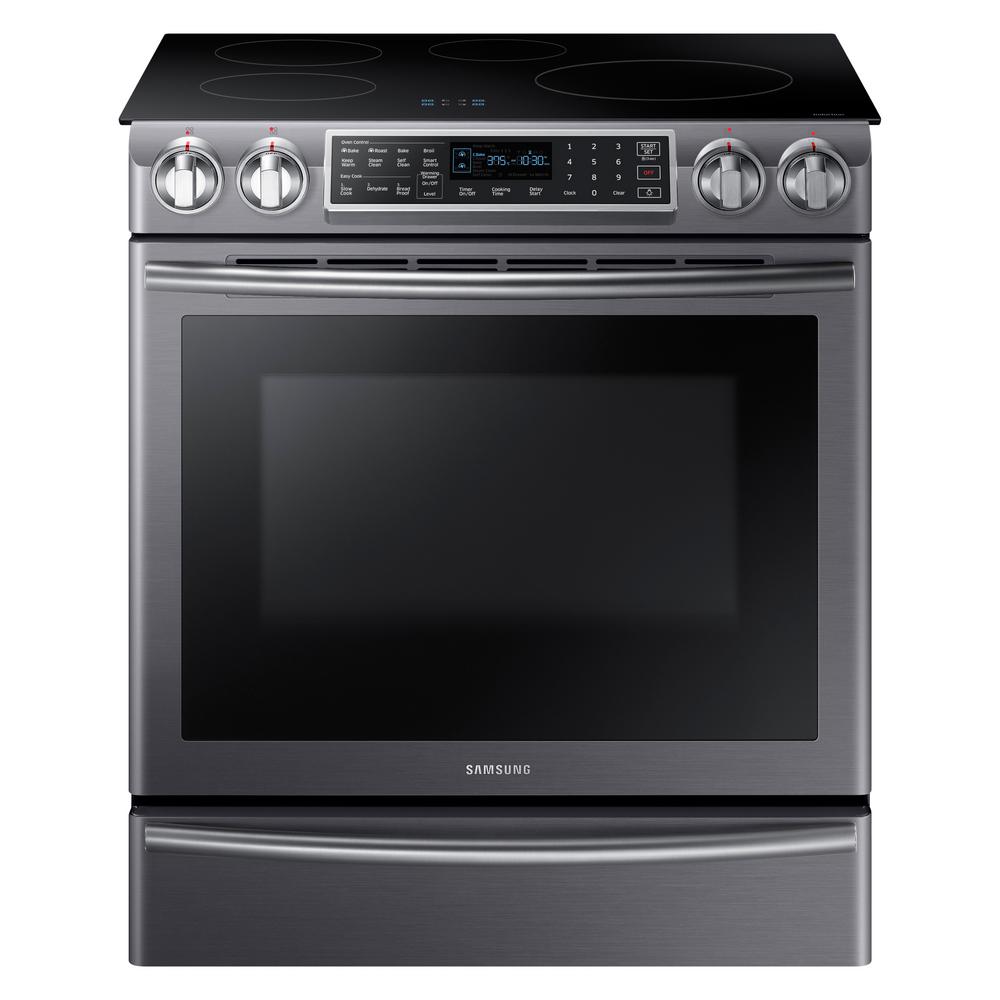 The GE Cafe Slide-In Induction Range is unique among the best induction ranges on this list because of the fact that it has a double oven. Depending on what you’re cooking, how you’re cooking it and the number of people you’re cooking for, having a double oven as part of your induction range has its pros and cons. If you value a large oven cavity that can fit a 25-pound turkey, or hate squatting to check on things in the oven, you might be better served by adding a wall or countertop oven to your kitchen. But if you’re preparing multiple things at the same time that require different oven temperatures, this oven could be your new best friend.

In total, the Cafe Induction range oven has a total capacity of 6.7 cu. ft.; the top oven is 2.4 cu. ft. and the bottom oven is 4.3 cu. ft. Along with the ability to cook multiple foods at multiple temperatures, you can also cook smaller dishes quicker and more efficiently with the top oven because the smaller capacity won’t require as much time or energy to pre-heat. But more than just a gimmick, this induction range has a number of other impressive features, which include WiFi connectivity, an edge-to-edge cooking surface, and the ability to sync/bridge the two 8-inch burners. This ensures you’ll be cooking unforgettable meals for years to come. 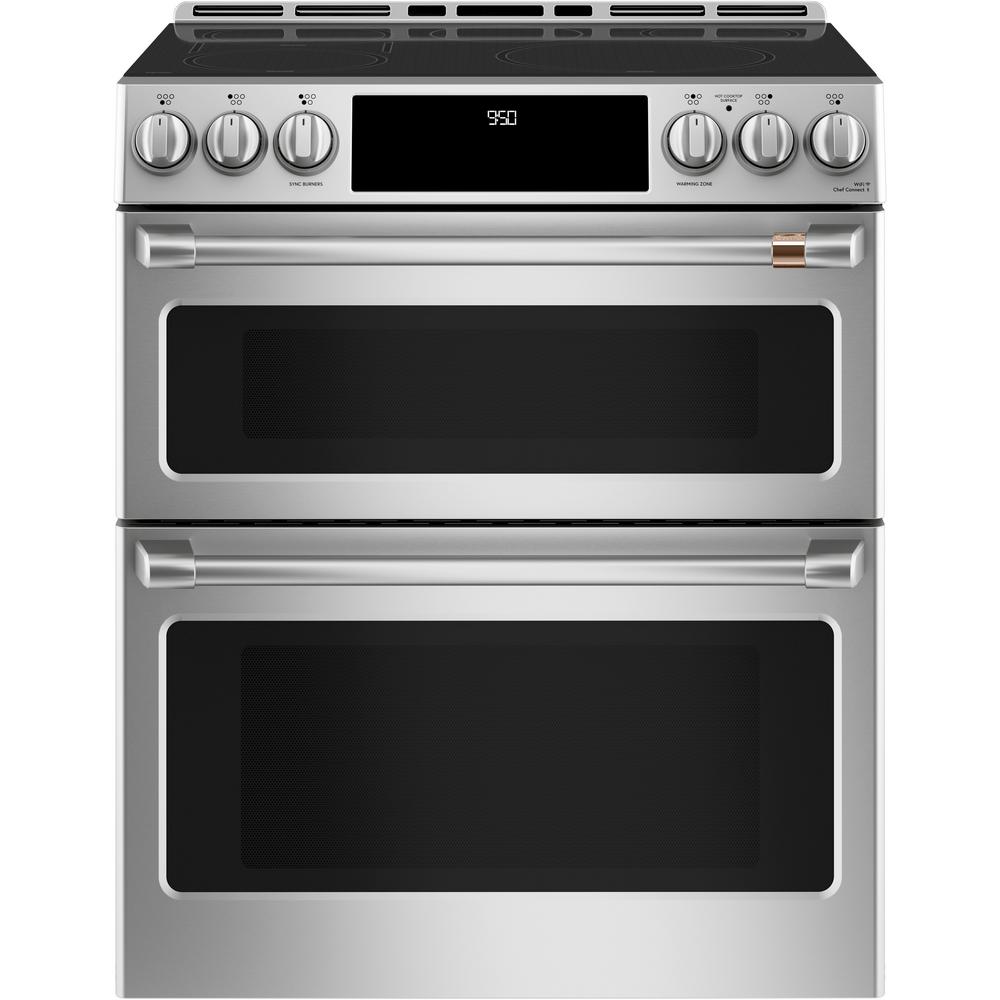