If you want to improve your home’s heating and cooling system, you might have considered an inline duct fan. While your HVAC system probably works hard, it might not be working smart. Even an energy-efficient system might not be running as efficiently as it could. That means that you could be paying more and getting less.

One of the surest signs of an under-optimized system is cold spots throughout your home (or hot spots, depending on the season). Your duct system might be to blame. The twists and turns of your duct can slow airflow, resulting in those super hot attics or ice-cold bathrooms. That’s where an inline duct fan comes in. By attaching to a part of your duct, they help to extend the flow of air, making for a more efficient HVAC system overall.

There are two kinds of fans that you’re likely to encounter, and there are substantive differences between the two. Inline duct fans are more powerful and expensive than register booster fans. Inline duct fans replace a section of your duct, and they require more electrical work than a booster fan.

However, an inline duct fan runs more quietly and produces greater airflow. If you need to cool a large room, or you have a specific application like an AV closet, then you’ll likely want an inline duct fan. Inline duct fans can also be used to control humidity. A booster fan requires less energy and is easier to set up, but it’s louder and not as powerful. That said, a booster fan can most likely be set up without the use of an electrician, which will save you money.

If an inline duct fan best suits your needs, we’ve rounded up some of the best options below.

This inline duct fan from AC Infinity is a great option for a variety of applications, thanks to the sleek digital control that’s included with the duct. It allows you to monitor factors like humidity and temperature, and you can make changes as needed. That makes this a good option for grow rooms, AV closets and as a booster for your HVAC system. The DC motor is controlled with pulse-width modulation — what that basically means is that this unit will run quietly. Best of all, the “plug and play” design means it’s designed to be installed without an electrician. 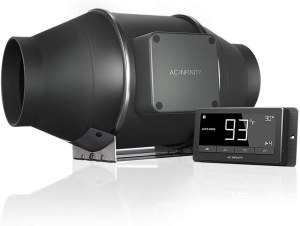 This compact and smartly designed option from Hydrofarm is available for 4″, 6″, 8″, 10″ and 12″ ducts. This particular option is designed for 6″ fans. It can generate airflow up to 400 CFM and has a brushless motor with sealed bearings that don’t require lubrication. The included mounting brackets and power supply means that this unit can be set up relatively easily.

Pros: Powerful and reliable option. Availalbe for a variety of duct sizes. 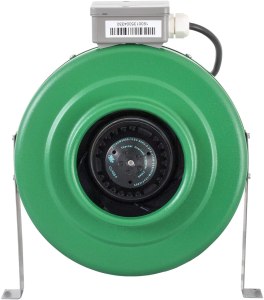 This option from Terrabloom allows you to provide ventilation for a hydroponic grow tent or as a supplement to an HVAC system. The simple variable speed control dial allows you to toggle the airflow between 60% and 100% of its capacity, making it a good option if you have rooms that have specific temperature needs. The 8″ duct fan comes with the components needed to handle the installation yourself, too.

Cons: Louder than some other options. 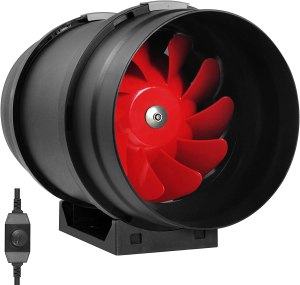 This affordable option from Vivosun is available for either 4″ or 6″ ducts. The price shown is for the 6″ duct. It’s a suitable option for boosting HVAC systems or as an exhaust to ventilate rooms, or to use in a grow room. This unit is smaller than some others and is designed to provide airflow of up to 240 CFM. That said, it’s one of the most affordable options available.

Pros: Affordable. Simple option to boost HVAC systems or as an exhaust. 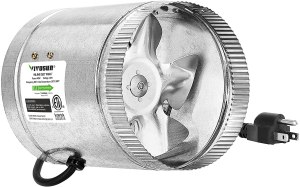