During 2020, a lot of us have become well acquainted with our kitchens and, in particular, our ovens. Baking bread (and especially banana bread) was just one of the things that went viral during this challenging year. If you’re one of the people who has become addicted to baking new recipes during quarantine, you may be ready to get a bit more invested in your new hobby. Owning one of the best stand mixers is a great way to take your baked goods to the next level.

Stand mixers offer several advantages over hand mixing. First, they are a lot easier on your arms as you don’t need to rely on muscle power. But, they also produce more consistent baked goods, as they evenly and quickly mix the ingredients together. Often, the final product will be lighter and more scrumptious thanks to the precision stand mixers offer, eliminating the chance you’ll overmix the batter.

The great debate among hobby bakers is whether owning a stand mixer or a hand mixer is better. The decision really comes down to three factors.

Price: Because hand mixers are a smaller, simpler kitchen tool, they are often cheaper than a stand mixer. If you don’t want to spend an arm and a leg but you need to give your arms a break in the baking process, a hand mixer will probably do. But if you bake a lot, having a stand mixer will make your life so much easier.

Size: The size of your kitchen may be a limiting factor in your decision. Stand mixers take up a lot of counter or cabinet space. The smallest of them will still take up about 18 inches square. Hand mixers, on the other hand, can be easily stored in a drawer.

Power: Hand mixers are inevitably less powerful than stand mixers, which usually range from 300 to 600 watts. Your decision may be determined by what you need to mix as hand mixers sometimes struggle with thick cookie doughs and bread doughs.

After you decide that a stand mixer is right for you and your kitchen, keep reading to learn more about the seven best models of 2020.

Since TV chefs everywhere began placing colorful KitchenAid Stand Mixers front and center on their countertops, the brand has exploded into homes across the country. Not only do these stand mixers look gorgeous in any kitchen, they’re also highly functional pieces of appliance technology with a variety of optional attachments, from pasta makers to meat grinders. The brand makes a range of mixers, from the 3.5-quart Artisan Mini Series to a 6-quart professional mixer (see number 7 on this list), but our favorite is the KitchenAid Artisan Series 5-Qt. Stand Mixer.

This stand mixer boasts three attachments, namely a whisk, dough hook and flat beater, and comes equipped with a powerful 325-watt motor. 10 mixing speeds and a 59-point planetary mixing action ensure you can mix, beat or whip to your heart’s content.

The only downside to this mixer is that the steep-sided bowl, which is available in both a brushed metal and glass version, doesn’t leave a lot of space between the lip of the bowl and the mixer. This means it can sometimes be difficult to add ingredients to the mixer. However, the Artisan Series fixes that problem by including a pouring shield. The included handle on the bowl, which only appears on the five-quart and larger sizes, is also incredibly handy. 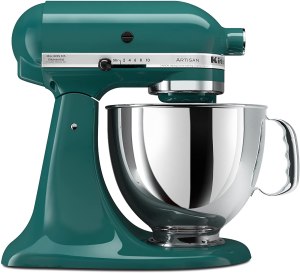 While KitchenAid may be at the top of everyone’s lists, they can be fairly expensive. Sunbeam has solved this issue by creating a really budget-friendly stand mixer that is still powerful enough to do everything an amateur baker needs. The Sunbeam MixMaster Stand Mixer is a dual-beater mixer with a 350-watt motor. It offers 12 speeds to keep you in control of the mixing action, and it also features a burst-of-power function to give the mixing action an extra boost when needed.

The most intriguing feature of this mixer is its three-way mixing action. Each beater mixes in an inward direction, creating a natural flow in your batter. In addition, the bowl sits on a turntable, so that you can manually turn it to ensure even distribution of your ingredients around the bowl. Plus, the off-center beater design allows the user to easily add ingredients and prevents the batter from building up on the sides of the bowl. 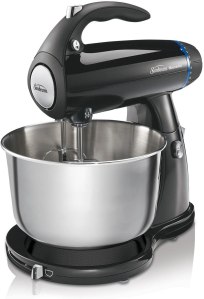 You probably recognize the Hamilton Beach name if you’ve ever shopped for a kitchen appliance before. The company makes everything from scales to blenders, and its electric stand mixer is one of the best on the market. The Hamilton Beach Electric Stand Mixer offers many of the same features as the KitchenAid mixers but at a fraction of the price.

This four-quart mixer features planetary mixing action and comes with a flat beater, whisk, dough hook and pouring shield. It also boasts seven mixing speeds controlled by a convenient dial. The 300-watt motor is slightly less powerful than many competing models, but it still should be powerful enough to mix most ingredients. However, the one annoying feature on this mixer is the tilt button and handle combination which requires two hands to open and close the mixer. Aside from that, this is a nice alternative to a more expensive KitchenAid model. 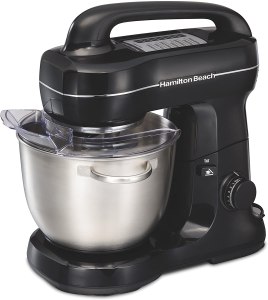 Like some sort of Frankenstein stand mixer, the Nurxiovo 3 in 1 is clearly the most multifunctional kitchen appliance on our list. Not only does this device feature a six-speed mixer, it also boasts a blender and a meat grinder built-in. Of course, if you don’t need all those devices, this mixer may take up more room than necessary in your kitchen. But, if you like to grind, blend and bake, this may be the best mixer for you.

The Nurxiovo Mixer features an 850-watt pure copper motor with built-in chip sensor technology to prevent overheating. It’s also extremely quiet when compared to other mixers at only 72 decibels. The mixer comes with three attachments, namely a flat beater, whisk and dough hook, as well as a pouring shield to sit atop the 6.5-quart bowl. The meat grinder also comes with two different grinder plates for your convenience. 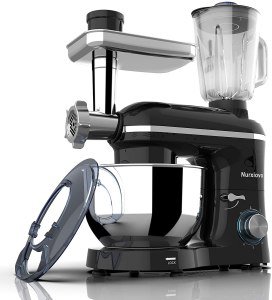 The Aucma Stand Mixer was designed as a smaller, lighter-weight alternative to the KitchenAid stand mixers. And, we think the company succeeded at supplying most of what makes the KitchenAid a hit while maintaining a smaller price tag. This 660-watt, 6.5-quart mixer comes in a variety of beautiful colors, from red to teal. In addition, it’s short enough to fit under most kitchen cabinets, saving you precious counter space. And, the appliance features six speeds for adjustable mixing and a locking tilting head.

The Aucma Stand Mixer also makes two slight improvements over the base KitchenAid models. First, the bowl sports dual handles, giving you a better grip if the contents of the bowl are quite heavy. Secondly, it boasts a built-in splash guard, which will minimize the time you need to spend cleaning up and keep your mixer nicer for longer. 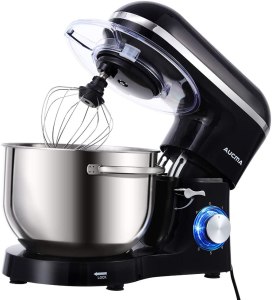 When Cuisinart set out to design its latest stand mixer, it seemed to do so with the goal of creating a sleeker KitchenAid at a slightly cheaper price point. This stand mixer boasts a 5.5-quart stainless steel bowl with a handle, a more powerful 500-watt motor and 12 speed settings. The die-cast metal construction ensures durability, so you’ll get years of use out of this purchase. In addition, the tilt-back head function provides access to the steep-sided mixing bowl. The mixer comes with a dough hook, a flat paddle, a whisk and a splash guard/pour spout.

After reading the above description, you might be wondering how the Cuisinart differs from the KitchenAid. First and foremost, it boasts a more powerful motor and a slightly larger bowl on this mid-range model. The design of the appliance is also slightly more modern with its metal accents, sharper edges and control knob. It’s also available in six different, popular colors, from periwinkle to ruby red. 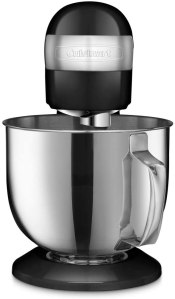 In addition to creating an entry-level stand mixer everyone wants on their counter, KitchenAid has also cleverly developed a line of professional standard mixers that are still attainable for hobby bakers. Their 600 series boasts 6-quart bowls and a bowl lift stand, just like the ones used in the kitchens of the most awarded pastry chefs.

While many of the features in the 600 series are similar to those in the Artisan series, there are a few notable improvements. In these mixers, KitchenAid has included a more powerful 575-watt motor with a 67-point planetary mixing action. The included accessories are also slightly different. Instead of a white-coated flat beater and dough hook, these professional mixers come with a burnished flat beater and Powerknead Spiral. If you love to bake, splurge on a KitchenAid Professional 600 Series Stand Mixer, and you won’t regret it. 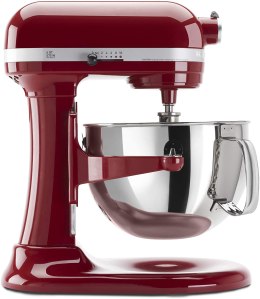