Cleaning your home can be labor-intensive work. And that’s even more true for pet owners. We love our dogs and cats, but their fur can create plenty of tiny tumbleweeds rolling around under our furniture and in the corners.

That’s one reason we are always on the lookout for a vacuum that is lightweight, easy to maneuver and boasts powerful suction. The Black+Decker Powerseries Extreme has all that and more at an affordable price. An excellent option for pet owners or anyone who wants a high-quality vacuum at a budget price point, the Powerseries has plenty of pros and a few cons, which we’ll cover below.

Spoiler alert: for $200, this is an impressive cheap stick vacuum. It even stands up on its own! That might not seem like a big deal, but it really is. Even the $900 Samsung Bespoke Jet vacuum can’t do that.

Black+Decker Powerseries Extreme: At a Glance 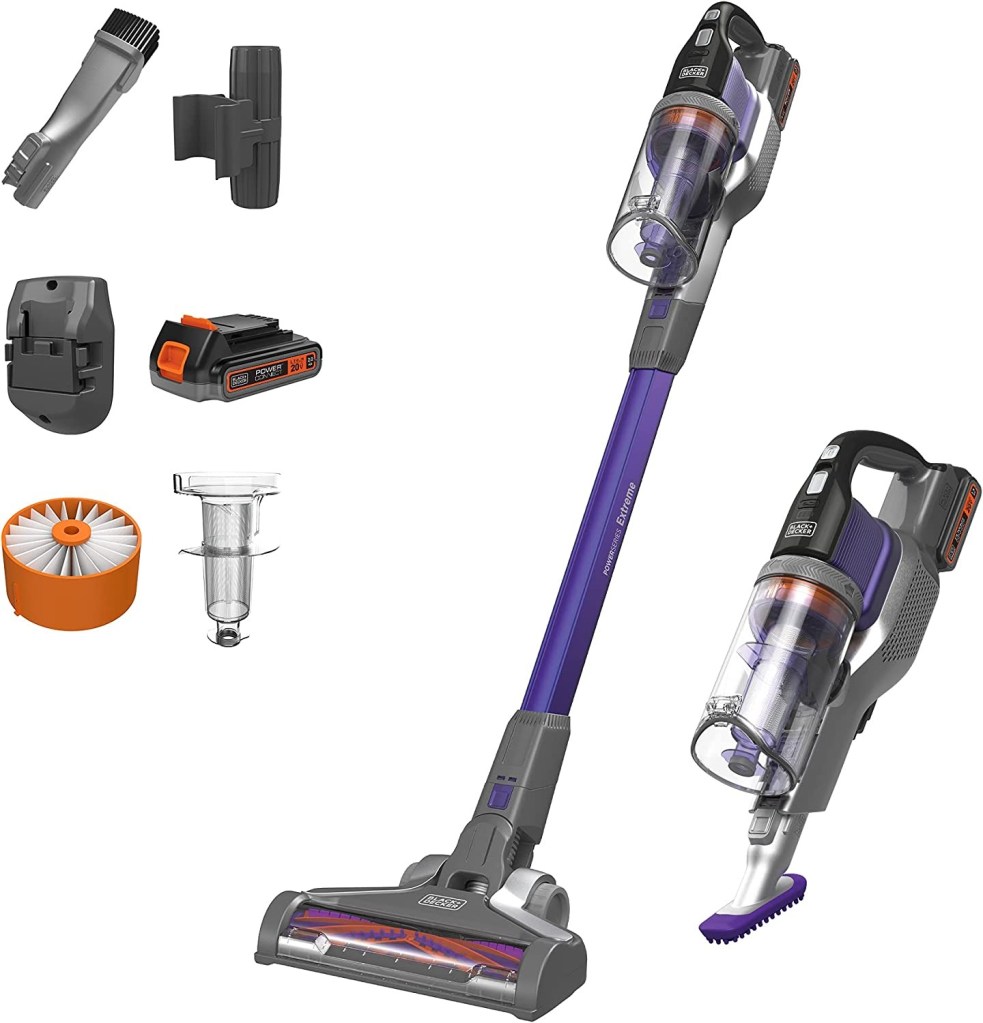 Pro: The Powerseries Extreme Is Easy To Assemble

It took us about three minutes to fully unbox the Powerseries and try out all the attachments. We like that the Powerseries comes with a holder for the two small brush attachments, which keeps them secured to the vacuum tube and reduces the chance of them getting lost between uses.

Included in the box was the main handle that holds the dust bin, the extension tube, the large floor brush, a small crevice brush, a pet hair tool with rubber nubs for grabbing hair and a 20-volt battery pack and charger. The Powerseries includes the necessary hardware to wall mount the battery charger.

We liked that the battery pack could be removed from the vacuum and charged without requiring the entire unit to be near an outlet. This makes it convenient to charge the battery in a small space that isn’t big enough for the entire vacuum, like in an outlet above a counter.

An LED indicator confirms the battery is charging and will hold a steady light when the battery pack is fully charged. The downside is that when using the wall mount, the LED light is covered, and users won’t know whether their battery is being charged or has reached a full charge. There is also a battery level indicator on the vacuum with three levels; it will flash when the battery is almost drained. 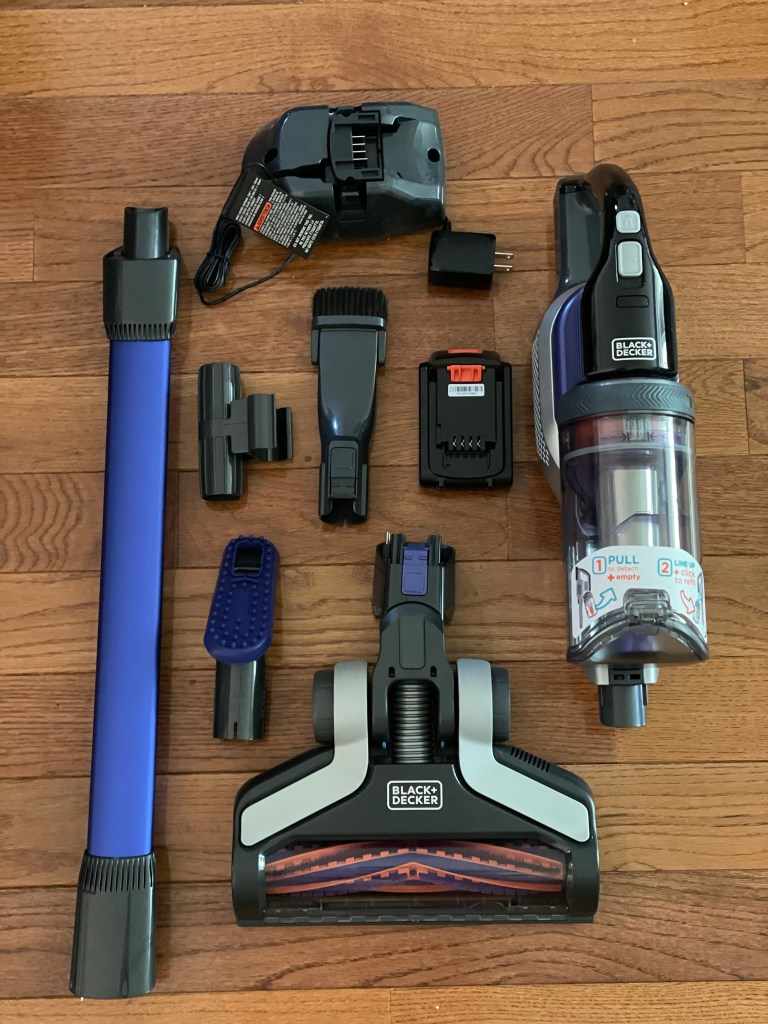 Pro: A Cordless Stick Vac That Won’t Fall Over

Two features on the Powerseries stood out for us — emphasis on “stood.” The Powerseries is a self-standing vacuum, not often found in the cordless stick category. Not having to lean the vacuum against a wall, lay it down or wall mount it is highly convenient, although the Powerseries does come with hardware for wall mounting. Taking breaks while vacuuming and quickly placing the Powerseries in a standing position was a huge bonus (no more vacuums sliding onto the floor from their leaning position during text breaks) and a feature we don’t have in our other, higher-priced stick cordless vacuums.

The Powerseries also has LED lights on the base of the vacuum, which allowed us to easily see what we were picking up and made it convenient to vacuum an entire house without turning on every light. The LED light and brush roll are paired and can be powered off together.

Con: Slightly on the Loud Side

Noise Level: The noise of the Powerseries got progressively louder as we went up in suction levels. Level one had a 76 dB reading, level two was 78.4 dB, and level three had 82 dB. The noise level is slightly high for a cordless stick vacuum, which is typically closer to 70 dB. For comparison, larger upright vacuums are around 80 dB.

It was easy to remove the dust bin on the Black+Decker Powerseries Extreme, but we didn’t like that the release for the bottom of the dust bin was on the backside that attaches to the main handle; it could accidentally be pushed down when removing or reinserting the dust bin. We took a few extra seconds when removing the dustbin to make sure we didn’t accidentally open the bottom and see all the dust and dirt we just finished vacuuming up fall onto our newly clean floor.

Reinserting the dust bin is slightly tricky to line up, but once we tried it a few times, we could reinsert the dust bin in seconds. We also liked that removing and cleaning the filter was quick and easy and that the Powerseries had large diagrams on the unit to help guide users on proper filter maintenance.

Suction Power: Black+Decker advertises the three suction levels of the Powerseries as one of its best features. In our opinion, it’s the vacuum’s worst feature. Users will likely only ever use the middle or highest suction level. We tried vacuuming dry oatmeal on a wood floor on the lowest suction level, and the Powerseries mostly pushed the oatmeal around. We had to make about five passes before it picked up the debris with the brush roll on.

On the highest level, the Powerseries cleaned the oatmeal on the first pass. So the suction on the Powerseries is excellent, as long as it’s in the middle or highest setting.

That Powerseries has an average battery life for a cordless stick, but the Powerseries has one significant advantage over competitors. Its battery can be removed, and any battery pack from Black+Decker can be used with the Powerseries. So if you already own a Black+Decker drill, you’re in luck. Otherwise, buying a backup battery pack is worth the investment if you have a large space to vacuum and want to cover the area in one cleaning session. 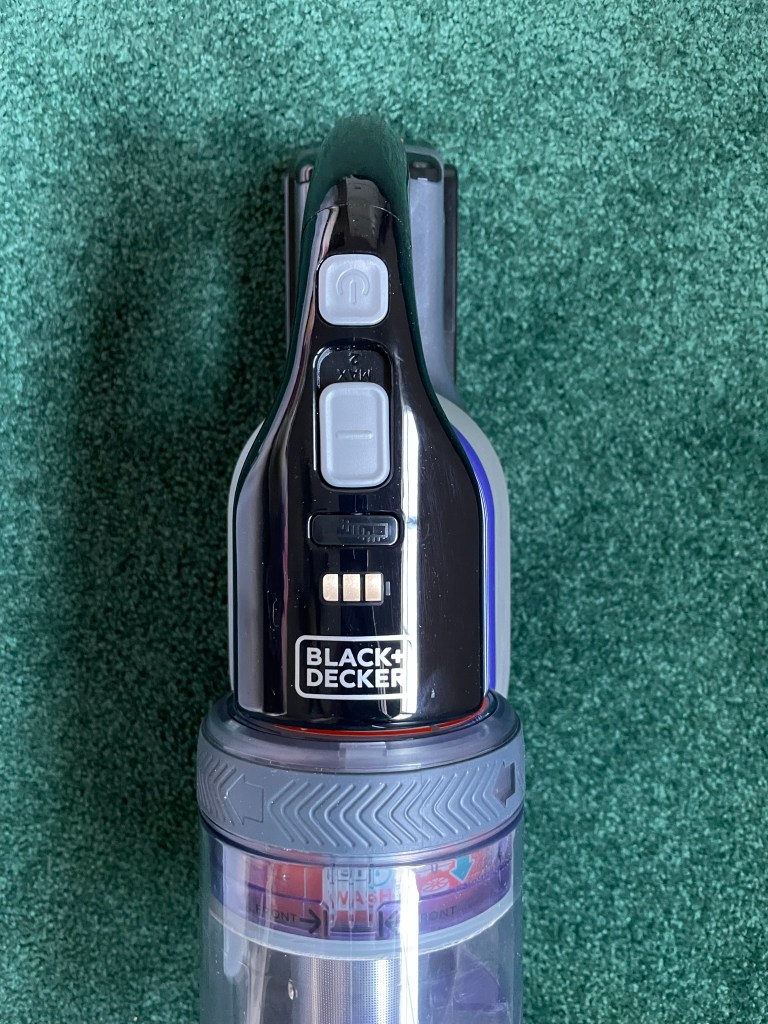 Maneuverability: The Powerseries is relatively easy to maneuver around furniture, into corners and in large rooms. The end of the extension tube has a plastic hose that allows the vacuum to pivot and turn easily.

We tested the Powerseries on carpet, tile and hardwood and found that it did a good job picking up dirt and debris on each surface. We were impressed that the Powerseries lived up to its anti-tangle claims regarding vacuuming hair. The brush bar was still hair-free even after vacuuming multiple rooms, including two bathrooms where lots of hair drying takes place.

The LED light on the front of the vacuum base is a massive help. Even with the lights on in our home, it enabled us to see more areas and smaller pieces of debris that would have otherwise been missed.

The freestanding feature on the Powerseries is also a bonus. We can’t count how many times we have stopped vacuuming to take a call and leaned our cordless stick vacuum against a counter or bed, only to have it come crashing down seconds later.

The Verdict: Should You Buy the Black+Decker Powerseries Extreme?

The Powerseries is an affordable cordless stick vacuum that is user-friendly, lightweight, easy to maneuver, has good suction power and boasts a versatile design that allows it to double as a handheld vacuum. It will clean any room in your home, and the anti-tangle brush lives up to its name. Its freestanding design is a big bonus, and we like that it has an LED light on the vacuum base. A removable battery pack adds to this vacuum’s convenience factor, as does the ability to use a backup battery pack.

Should You Buy It? Yes, if you’re looking to save money and want a user-friendly cordless stick vacuum.

The Bottom Line: Black+Decker makes affordable home appliances, and we’ve had positive experiences with the brand’s vacuums in particular. The Black+Decker Powerseries cordless stick vacuum can’t compete with luxury options from Dyson or Samsung in terms of suction power and overall design, but for anyone looking for a Dyson vacuum alternative, it’s a great option. In fact, it’s the best cordless stick vacuum under $200 that we’ve tested yet.

What Are the Downsides? The battery did drain relatively fast when using the Powerseries on its highest setting with the brush roll on, but this is commonplace for a cordless vacuum. Using the Powerseries on the medium setting or as a handheld helped extend the battery life. We had to do a few passes, even at the highest suction level, to ensure we grabbed all the dirt and debris on our floors and stairs, but the Powerseries eventually picked everything up.

Is the Black+Decker Powerseries Extreme Worth It? Yes. The Powerseries Extreme comes in at a much lower price than its competitors in the cordless stick vacuum category, including Dyson, Samsung, Roborock, and Shark. It will work for homes with and without pets, but it’s a great vacuum for pet hair specifically. Overall, it’s definitely worth the $200 price tag. 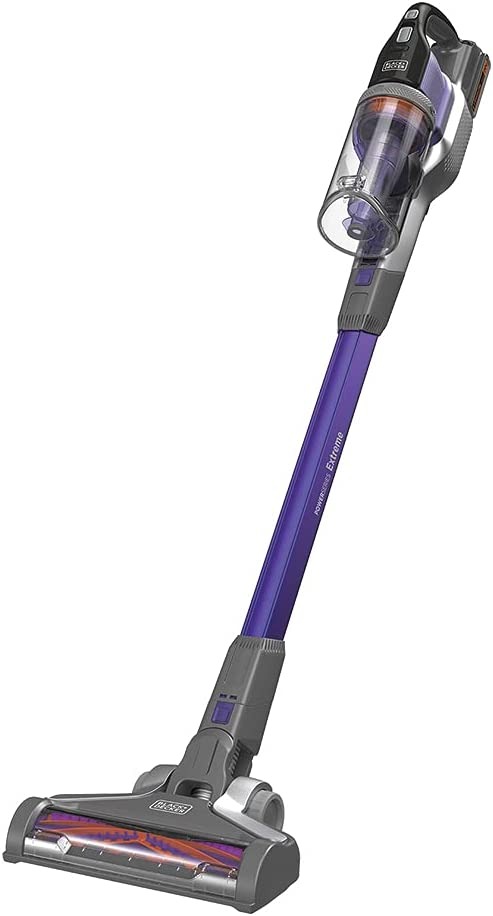