Armed with the same processor that powers the 2020 MacBooks, iPad Pro, and 24-inch iMac, the Apple iPad Air 5 is the latest gadget in the lineup to join the exclusive M1-chip-powered club. Plus, it’s getting 5G connectivity. During its springtime Peek Performance event, Apple unveiled its fifth-generation iPad Air combining powerful computing into a sleek design. 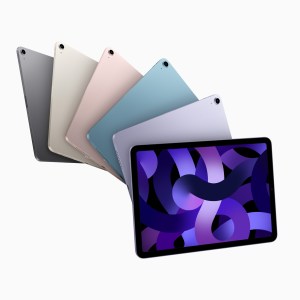 What We Love About The Apple iPad Air 5

The upgraded chip means that the fifth-generation iPad Air will have more muscle power than its predecessor while also reaping the rewards of the chipset’s battery optimizations. This means it’ll have substantially improved processing and graphics performance while offering a longer-lasting battery to put it ahead of the competition.

Another new addition is its support of 5G connectivity for faster data speeds. Using 5G is a first for the iPad Air series, since its predecessor topped out with 4G support. It should be an asset for anyone streaming their favorite TV shows and movies. Download times will be even shorter thanks to 5G, so you should have plenty to grab your favorite flick before you fly off. 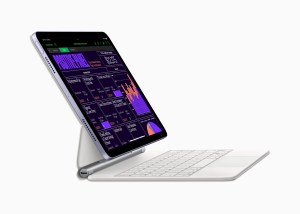 Beyond that, the iPad Air 5 remains essentially unchanged, featuring a 10.9-inch Liquid Retina Display, Touch ID built into the power button, 0.24-inch thick chassis, support for the 2nd generation Apple Pencil, and a 12MP wide camera with an f/1.8 aperture. In the lineup, it’s smacked right in between the pricier iPad Pro and the 9th generation iPad. Nevertheless, it makes a compelling case for being one of the best tablets this year.

Luckily its pricing remains the same as its predecessor at $599, which will be available in 64GB or 256GB storage options — as well as Wi-Fi and Cellular options. Pre-orders begin on March 11, with general availability starting on March 18. 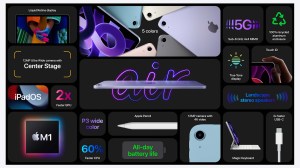 There’s still enough of a gap between it and the 12.9-inch iPad Pro, which starts at $1,000, making the new iPad Air the mid-range offering in the lineup. For those that don’t need the intense performance of the iPad Pro series but still crave something with more substance than the 9th Gen Apple iPad, this new iPad Air certainly fits the bill.