Apple’s new M2 chip has finally been announced, ushering in the next-generation of computing that continues the company’s strategy of balancing power and battery life to its products. During its WWDC 2022 keynote event held on Monday, June 6, Apple announced new versions of the MacBook Air and MacBook Pro accompanied by the new Apple M2 chip.

The new M2 MacBooks will be some of the most powerful and best laptops in the world. For reference, the M1 generation of chips was so powerful that it outperformed Apple desktops and most PCs in terms of speed and processing power. We actually named the M1 MacBook Air the best laptop for two years in a row, which is virtually unheard of in the competitive laptop space. Now, the long-rumored M2 MacBooks are coming soon.

Luckily, we won’t have to wait long for either of them because they’ll be available starting next month for $1,199 and $1,299 respectively. Keep reading for all the details as well as the first official photos of the new generation of MacBooks.

Known for its razor-thin design, Apple’s MacBook Air with the new M2 chip flaunts a striking new design that measures in with a svelte 0.44-inch chassis and 2.47-pound weight. Available in four colors, this new M2-powered MacBook Air continues to be a stunner when you look at how thin it is from the profile. That’s because it still features an all-aluminum unibody enclosure, giving it that premium look and feel. Even more mesmerizing, we’re smitten by its new 13.6-inch Liquid Retina Display. 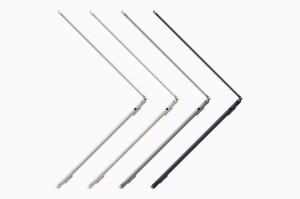 Not only are the bezels around the new display pretty thin, but the colors it produces are frankly stunning. Every inch of this screen begs to be seen by the eye, just because it now offers support for 1 billion colors. It certainly will help if you’re editing photos and videos. Adding to that, the new 13.6-inch Liquid Retina Display is 25% brighter and can reach a peak brightness of 500 nits — making it even more visible than ever before.

What’s really astounding about the MacBook Air with the M2 chip is how it’s more powerful. With the help of Apple’s engineers, this ultraportable laptop offers an increased performance of 20% with Photoshop and a 40% improvement with Final Cut Pro. Therefore, it’s perfect for content creators that don’t want to be bogged down with slow rendering times or editing. Even with the boost in performance, it doesn’t impact its battery life because you’ll still get the same 18 hours of video playback just like before. 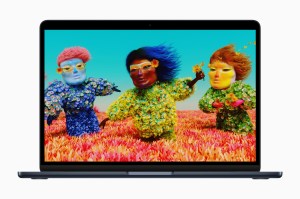 If that’s not enough, Apple has brought back MagSafe charging, which helps to prevent any accidents if someone happens to trip over the power cord on the floor. Furthermore, there’s a new 1080p FaceTime HD camera that will make you look good, including when there’s not much light around.

Why We’re Excited About the MacBook Pro With M2 Chip

Need a lot more power? That’s where the Apple MacBook Pro with M2 chip comes to the rescue with the company’s latest silicone. Emphasizing performance above anything else, it’s a notebook like no other that combines the power of a gaming PC with the battery performance of an ultrabook. 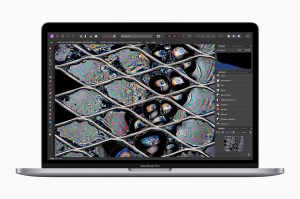 Aesthetically, there isn’t a whole lot different with the M2-chip-powered MacBook Pro, but users will appreciate how it’s been supercharged to meet the demands of power users. This new 13-inch MacBook Pro features an 8-core CPU and 10-core GPU, delivering an increase of 40% gaming performance than its predecessor — while still cranking out upwards of 20 hours of battery life with video playback.

Usually, something with this much firepower under the hood would generally build up a lot of heat, but it’ll be able to maintain peak performance thanks to its active cooling system. This will give power users the confidence to do things like edit 4K video on the go, all without the worry of heat buildup adversely affecting its performance.

In true Apple fashion, these new thin and light laptops will be available starting next month at Apple locations and select retailers. While no specific date was mentioned, the MacBook Air and MacBook Pro with M2 chips will start at $1,199 and $1,299 respectively — with many configurations to choose from.

We’ll update this post with additional information as these products are released. They should be available around the same time as Amazon Prime Day, and if we’re really lucky, some of these new laptops may even get their first price drop for the Amazon shopping event. 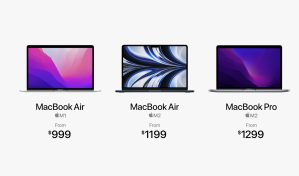 Courtesy of Apple.
Looking for More from SPY?