The new MacBook Air has officially arrived. And with a few improvements, Apple has managed to create a computer for the masses that’s powerful, streamlined and still more affordable than previous models.

The release came shortly after a brand new iPad Pro came out and made a splash with its renovated camera optics technology, larger storage capacity and improved graphics.

Despite the manufacturing delays out of China, closed stores and rocky global economy, Apple has still managed to create and release top of the line machines on time, ones that are worth investing in for when this whole ordeal is over.

If you’re in the market for a new laptop and curious about the new MacBook Air, it’s definitely worth taking a look at. It’s 13.3” wide, comes in three different colors (rose gold, space gray and silver) and with a few different processing speeds. 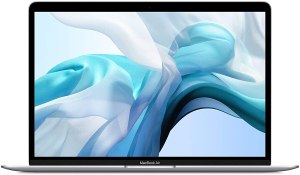 The first and most pertinent improvement we’ll mention is the keyboard. Apple has switched out the controversial butterfly keyboard for the “Magic Keyboard” that first appeared on the new 16″ MacBook Pro. It has a refined scissor mechanism with 1mm of key movement that creates a reliable, quiet and comfortable typing experience.

The computer boasts heavy-duty performance with CPU speeds up to twice as fast as previous models, 80% faster graphics and up to 2 terabytes of SSD storage.

The computer comes with a headphone jack for wired headphone users (finally) as well as two of Apple’s Thunderbolt 3 ports, the versatile USB-C ports that can charge, display and connect to other devices all in one. It’s also got Apple’s standard Retina display, Touch ID fingerprint capabilities and Force Tough Trackpad that’s now 20% larger.

The speakers have also been given a boost, with 25% more volume, improved bass and a three-microphone array equipped to capture your voice with ultimate accuracy.

On top of all that, this computer is made with 100% recycled aluminum and 47% lower carbon emissions, making it one of Apple’s greenest laptops ever.

The new Macbook Air starts at just $999, which is already $100 cheaper than the previous model. However early users are recommending you pay the extra $100 for the upgraded 1.1GHz dual-core Core i5 processor.

Whatever you decide, at 2.8 lbs and 13.3” wide, this computer is portable, powerful and made for everyone. The MacBook Air changed the game of mid-size computers after its inception in 2010. Now, a decade later, the same great machine has benefitted from Apple’s continued innovations.