In our increasingly tech-orientated world, smartwatches are fast becoming the next must-have gadget. These tech-filled devices offer so much more than your average wristwatch. And, it would be fair to say that in desirability and popularity, Apple is leading the way with smartwatch sales growing 54% year over year. However, the latest Apple tech does come at a hefty financial price. It may be little surprise that many people are turning to some of the best Apple watch alternatives. Whether you prefer Android smartwatches or can’t swing the price tag, there are more worth smartwatches released all the time.

Before we have a look at the best Apple Watch alternatives available, let’s first answer some common questions and look at the reasons why these wrist-mounted computers should be your next tech investment.

What Is a Smartwatch?

While some would say knowing the time and date is pretty smart, in the world of smartwatches, it’s not even close. Rather than a time-telling device, it’s perhaps better to think of a smartwatch as a compact smartphone on your wrist. Common features and functions of a modern smartwatch may include:

What Is the Best Apple Watch Alternative?

The answer to this question is not the same for everyone. Smartwatches are available at a range of price points with the most budget-friendly options starting at as little as $40. However, as is the case with most tech, if you pay less, you generally get less. For this reason, it’s worth considering what exactly you want from your smartwatch. For example, if your wish list is made up of a heart rate monitor, GPS functionality and the ability to read your incoming social media messages on screen, there’s little need to break the bank. But if you want the latest tech, latest specs and most advanced functions, you’re going to need to scroll down a bit further.

Whether you’re looking for a watch to take calls without taking your phone out of your pocket, to level up your fitness workouts or to listen to your favorite audiobooks, there’s likely an Apple Watch alternative that can do the job for a fraction of the price. Check out our top choices below, from budget smartwatches to Fitbit fitness trackers.

The Samsung Galaxy Watch Active2 has received top reviews from over 90% of the Amazon users who have rated it, and when you see it inside and out, it’s easy to see why. Visually, the watch boasts a sleek style that works both in smart and casual environments. For an element of personal uniqueness, it’s available in three different styles, two different sizes and four different colors, limiting the likelihood you’ll meet someone with exactly the same model on their wrist. Function-wise, the watch is capable of automatically tracking all your workouts and provides a visual heart rate monitor which is great for targeted workouts. It also includes the Calm app to aid in recentering, meditating or generally staying stress free throughout the day. Additionally, Bixby’s voice functionally is at your command for a whole range of functions, from making calls to changing tracks, while for the fitness focused, the watch goes beyond the average fitness smartwatch and actually offers advice ranging from your running style to where your heart rate should be. 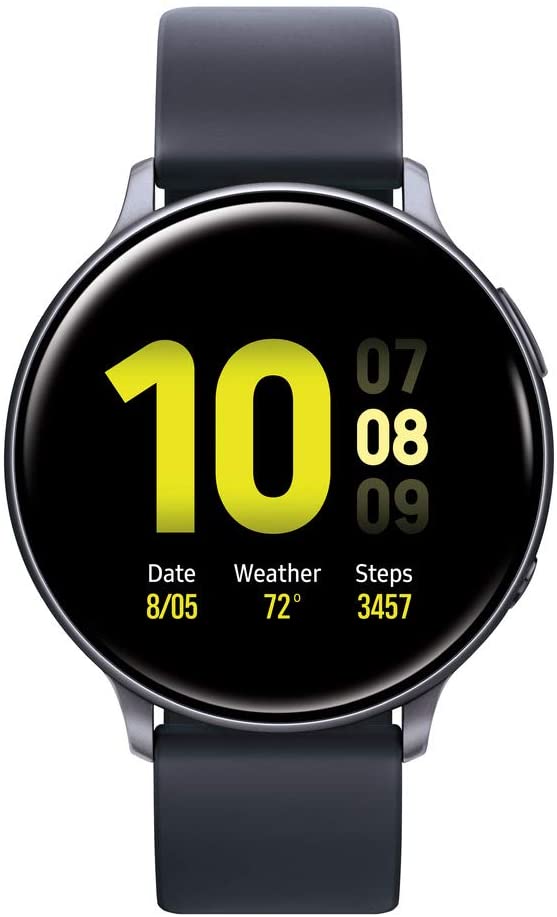 If you’re on a budget, the sub-$40 price of the Willful Smartwatch is hard to beat. In addition to its budget-friendly price, the fact it sports a built-in sleep monitor, can monitor your heart rate, distance, step and calories and lets you view messages from a number of applications, including Messenger, Whatsapp and Twitter, only adds to the appeal. The IP68 waterproof and dustproof watch also boasts impressive battery life, offering up to seven days of use or up to 42 days of standby time from a single full charge. Furthermore, this unisex-style watch, which is compatible with most Android and iOS phones, comes in four different colors and lets you choose between three different digital face displays.

Of course, there’s only so much tech you can pack into a $25 smartwatch. Customers report problems with screen glare, lag time, and delayed notifications. If you’re looking for the cheapest alternative to the Apple Watch, this is a solid budget option, but we would ultimately recommend choosing one of the other options on this list. 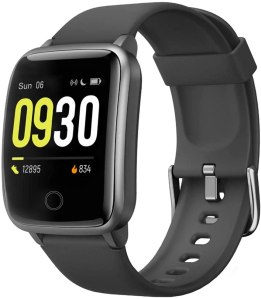 Similar to the Apple Watch, the Amazfit Bip watch is a combination of function and fashion, able to be worn straight from a workout into the office. It is equipped with a built-in GPS and heart rate monitor as well as a step monitor which can be adjusted to sport mode for a more precise record of your workouts. It’s customizable, so you can ensure you receive alerts for texts, phone calls, Slacks or other messaging mediums of your choosing. Additionally, this smartwatch is available in a range of 10 different colors, meaning there’s likely one to suit your style. 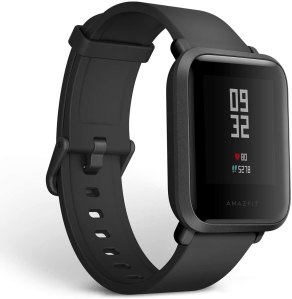 It may seem like cheating to suggest an Apple Watch alternative to an Apple Watch, but older tech is much friendlier to those on a budget. This is exactly the case with the Apple Watch Series 3. At under $200, this genuine Apple Watch still boasts a lot of the tech and intuitive functionality that makes the device the leader in its respective field. This swimproof 2017 model is available in two different sizes, two different colors (space grey or silver aluminum) and includes a wealth of features, like GPS, retina display, an optical heart sensor and the ability to store music, podcasts and audiobooks. 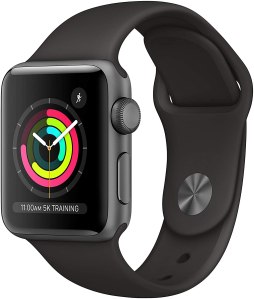 If you’re focused on fitness goals, the Fitbit Versa 2 could be the right fit for you. This advanced fitness device is able to track key vitals, including your heart rate, steps, distances, calories burned and other handy stats, to keep you informed about your progress. Each watch comes with a three-month trial of Fitbit premium which gives you wrist-mounted health and fitness guidance 24/7. The watch also includes Amazon Alexa built in, allowing you to check the weather forecast, set handy timers or control your home devices with nothing more than your voice. The watch is available in five different colors and comes with both the classic and woven band. 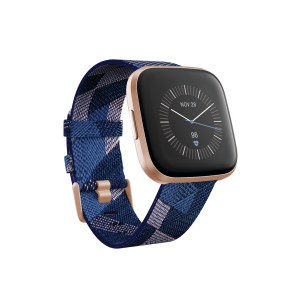 With the capacity to store around 500 songs, your workouts never need to be soundtrackless ever again when you have the Garmin Vívoactive 3 on your wrist. This active lifestyle device works with Garmin Pay to allow for contactless payment which means you can head out without your wallet and not have to worry. The watch’s face is also highly customizable, allowing you to choose from one of the many thousands available to you. There’s a built-in heart rate monitor, 15 preloaded sports apps and a range of colors to choose from, ensuring your watch suits you. You’ll also enjoy up to seven days of use in smartwatch mode and around 5 hours of continuous use when the watch is in GPS or music mode. 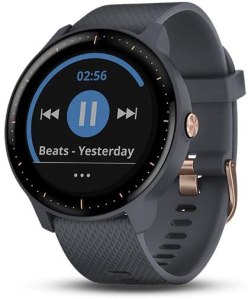 Inside the box of this Skagen Connected Falster 3, you’ll find a handy, magnetic, USB rapid charger that’s capable of providing up to 80% battery life in under one hour of charging. The watch itself is compatible with both iPhone and Android phones and uses Google Fit to track your heart rate and general activity. The stylish design is also completely waterproof up to 5ATM, has a GPS and includes a built-in speaker that can deliver audible alerts and let you receive phone calls on the go without having to reach for your phone. Plus, the 4GB of built-in storage ensures you’ve got plenty of space to store your apps. 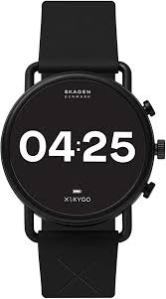 Coming in at just under the $300 mark is the third generation model Motorola’s popular smartwatch offering, the 360. Inside the box, you’ll find both a genuine leather and high-impact sports band, giving you the choice of a casual or smart look every time you step out of the door. The watch is also water resistant to 3 ATMs and comes with a rapid-charge USB dock which delivers a lightning-fast charge in under 60 minutes. It runs on Wear OS by Google for Android and iPhone and is compatible with a wealth of apps, including Spotify, Google Music, Google Pay and Shazam. It’s also well suited to fitness enthusiasts as it includes a built-in GPS, a heart rate monitor and a step counter which works seamlessly with fitness apps like Google Fit, Strava and Nike Run Club. In addition, the watch’s premium materials, which include scratch-resistant Gorilla glass, ensure this timepiece is ready for the rigors of day-to-day use. 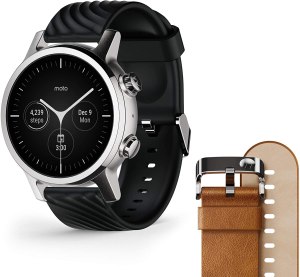 With its ability to withstand underwater pressure up to five ATMs (around 50 meters deep), the Umidigi Smartwatch is a solid choice for users who spend a lot of their time in the water. In addition to the seemingly standard step, calorie and distance traveled counters found in the average smartwatch, you’ll also find a heart rate and blood oxygen monitor, allowing you to better grasp changes to your physical condition. There are nine different sport modes alongside other practical features, like an alarm clock, timer, stopwatch and the ability to act as a music remote control. Furthermore, the real-time notifications from your social media platforms may be accompanied by sedentary reminders if your watch feels like you’ve been inactive for too long. 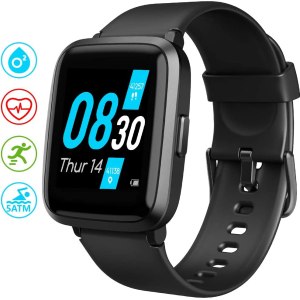