Despite the fact they’ve been around for a few years now, 3D printers are still fairly expensive to own and maintain. Plus, they just take up a lot of real estate in a household. And while the results are absolutely worth it, we often wonder if there’s a better solution for those that want a 3D printer experience, without having to pay the full price for it.

Enter 3D pens. Viewed as sort of a cousin to the 3D printer, 3D pens allow you to draw your creation in real life, giving it a fully-realized look and feel. 3D pens function by spitting out strains of hot plastic, similar to a hot glue gun, that can be placed on top of one another to create a fully 3D model. It’s a free-flowing, creative experience that’s a great toy for children and for children at heart. Creating with a 3D pen is immensely rewarding because, at the end of it all, there’s a tangible model you get to call your very own.

While 3D pens haven’t quite caught on in the same fashion that 3D printers have, there are still a few good options for those that want to go ahead and begin creating 3D models of their own. We’ve rounded up five of the best so that you can go ahead and bring your dreams to life — literally.

MYNT3D’s professional-grade 3D pen is the 3D pen to beat. The best seller on Amazon and a top-rated selection, MYNT3D has an adjustable feed that helps to better regulate speed and flow, which helps you feed into each of those nooks and crannies a bit better. The pen’s OLED display also makes it easy to determine which setting the pen is on during a given session.

Additionally, a fully customizable temperature control allows you to increase or decrease at the touch of a button to better link pieces together. The pen’s ergonomic shape makes it comfortable to hold for extended periods of sculpting, which means the only limit to this pen is your imagination. 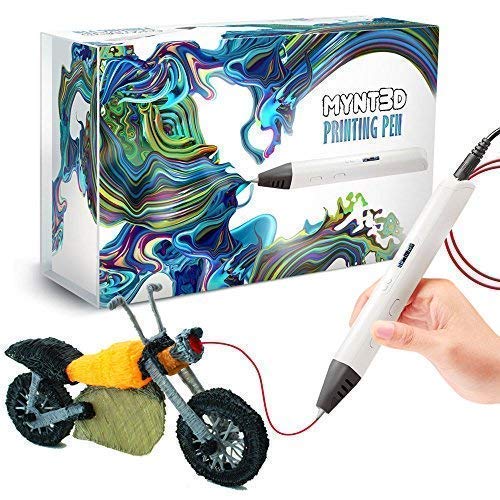 3Doodler’s Create+ 3D pen has been updated with a new redesign that takes full advantage of its recently added Dual Drive functionality. This new addition is a small, but critical, feature that allows for greater control of speed (which assists with different drawing techniques) and better overall temperature control. It also creates just an overall smoother drawing experience.

Additionally, 3Doodler’s dedicated mobile app furthers the interactive experience by providing dedicated (and easy to understand) templates that offer step by step instructions to better test your skills. Whether you’re brand new to 3D pens or are looking to upgrade to something nicer, the Create+ is sure to satisfy both ends of the spectrum. 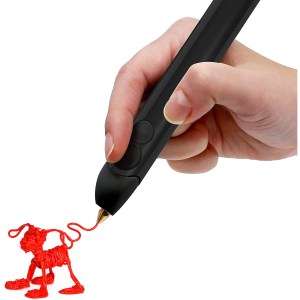 This 3D pen is great for both beginners and more advanced users. For beginners, the pen comes with a step-by-step manual as well as a stencil to get them from ground zero to drawing in no-time. And the step-less speed slider allows beginners to slow the process down and gives more advanced drawers more control over the pen.

The pen takes about two to three minutes to warm up before it is ready to use. Afterward, the pen’s temperature can be adjusted to use both PLA and ABS filament, although packs of PLA filament are initially provided. When you’re done using the pen, a nifty safety feature shuts the pen off after two minutes of inactivity. 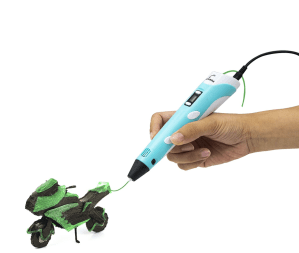 If you want to save a few bucks on the MYNT3D Pro version, the Super has many of the same features and creative capabilities. The Super 3D pen has the same step-less speed slider that helps creators draw quickly, and slows down the pace for more intricate fillings. The nozzle is both replaceable and clog-resistant. You might be asking, so, what’s the difference then?

The Super 3D pen does not have an OLED display. You can still adjust the temperature with an adjustable screw, but it’s not nearly as convenient or precise as the OLED screen. This pen also works with both ABS and PLA filament. 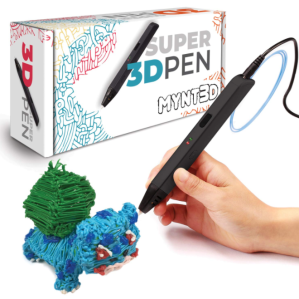 A good place to start for a novice 3D drawer is the MYNT3D Basic 3D Pen. The removable nozzle and gearbox help eliminate the possibility of any clogging. And there are three distinct speeds: slow, medium and fast, so beginners can get a good grasp on how the filament flows out of the pen. The pen can be used with ABS and PLA filament adding extra versatility to this beginner 3D pen. 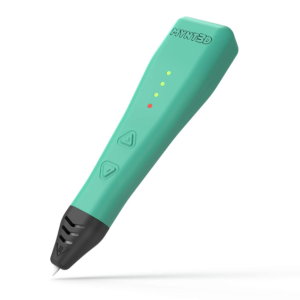 The Scrib3D Advanced provides some solid features for a little more control over your 3D drawings. The LCD screen helps you stay in complete control of the speed and temperature that your filament is melting at. There are eight speed settings to quickly start the base of your drawing or slowly get to work on more intricate fills. The Advanced pen has a “soft touch” surface and a nicely contoured grip to give artists that extra bit of control that makes all the difference when it comes to their 3D artwork. 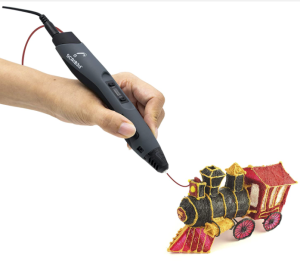 When you have huge creative aspirations and abilities, you are going to want a pen that can handle a lot of materials and provides precise movement for advanced projects. The Pro+ can put to use a handful of different materials including ABS, PLA, nylon, copper, wood and bronze. And with advanced speed and temperature controls, you have complete control of whatever material is in use. The pen comes with a starter pack of materials as well as a mini doodle pad. It is certainly pricey, but serious artists will appreciate the advanced features and capabilities. 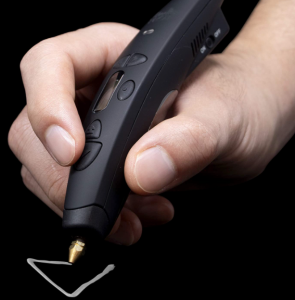 Those that typically draw using pens or colored pencils will have a more difficult time drawing with thicker 3D pens like the majority mentioned in this roundup, so if you’re looking for something a little more similar to what you’re used to, check out this slim 3D pen from Hammacher Schlemmer. Deemed “The World’s Slimmest 3D Printing Pen” for a reason, this tool will bring those sketchbook doodles into real life.

There is a fan inside the pen to cool it down when it begins to get too hot and there are six different speed settings depending on what you’re comfortable with. It’s a totally precise option that is easy to grip and will help bring a little more control into your 3D printmaking. 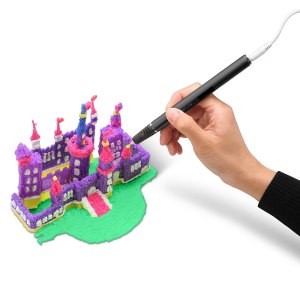 This is a great option for kids thanks to its set of safety features. For starters, this pen uses PCL filament which melts at a lower temperature than both ABS and PLA filament. Since the melting temperature is so low, this keeps the nozzle from becoming too hot and prevents burns and enhances child safety. That being said, this pen does not work with either ABS or PLA filament.

The grip is nice and comfortable, especially for children, and the long battery life helps your kids keep focused on their drawing and not bummed waiting for their 3D pen to charge. It also comes with stencils to help your kid go from no experience to drawing quickly. 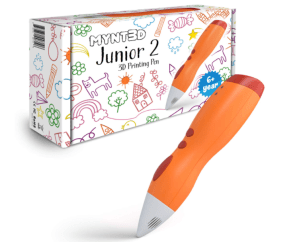 This 3D pen is the ideal pen for any child six and up that’s looking to add a little creativity into their life. The previous 3Doodler pen mentioned is awesome for more experienced 3D pen users as well as adults, but the Start Essentials pen is exceptionally made primarily for the use of kids.

This pen doesn’t heat up in the slightest, so your kids’ hands will stay burn-free no matter how frequently they use this. The nozzle itself can also be touched without any risk whatsoever. Try getting that from another 3D pen. This one also has a smoother drawing experience so molds come out looking less goopy and disfigured than they do with the use of other pens. 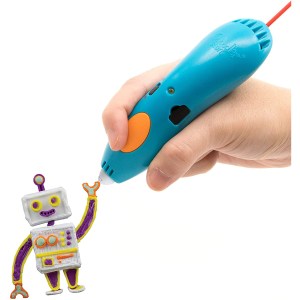 If you’re just looking to experiment with a new hobby, look no further than this XYZprinting da Vinci pen. It comes with a series of templates to help guide you as you take on your newest form of artistic entertainment. It’s lightweight and allows for easy moveability which is even perfect for touching up 3D models created from another machine. The pen uses PLA filament which is totally bio compostable, so you won’t feel like you’re damaging the Earth as you’re doodling away. 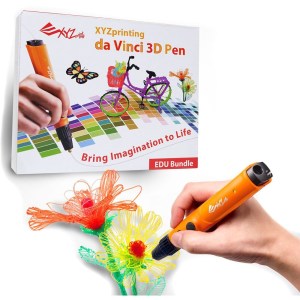 Whether you are just getting into 3D drawing or you’ve been in the game for a hot minute, it is always smart to have extra PLA filament. This is a great refill pack that is affordable and comes with 20 different colors, and each color is 20 feet of filament. For $20, that’s $1 for 20 feet of filament per color. That’s a great deal on extra filament that is going to come in handy. Trust us. 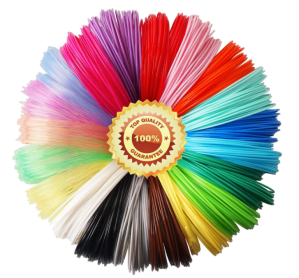 The design mat accomplishes two things: it helps beginners form a solid base for their designs with the mat’s grid lines and it protects your surfaces from getting burned. It is heat resistant up to 518 degrees Fahrenheit and can easily be cleaned after use. This is a great tool for beginners and for protecting your countertops from getting scorched.

Bring Your Creations to Life With Colorful 3d Printer Filaments