Although it’s still in its infancy, 3D printing, along with virtual reality, has the potential to be one of the most transformative technologies of the 21st century. The promise of being able to take a digital schematic from a company and manufacture your own specialty parts (or maybe even an entire product someday) is a romantic vision that makes creators swoon. But for that to happen, one of the best 3D printers is required.

And while we’re still not quite at the point where home 3D printing has transcended hobbyists and prototyping, the technology continues to improve and these machines continue to be more and more capable with each successive generation.

When it comes to the best 3D printers for home use, you will typically find printers that fall into one of two categories: FDM printers and SLA/MSLA printers.

What Are FDM 3D Printers?

FDM, short for fused deposit modeling, feeds plastic filaments (typically made of more accessible/affordable PLA or more heavy-duty ABS plastic) through an extruder and melts them down so that it can print your 3D model layer by layer.

This technology is typically the fastest and cheapest 3D printing technology around, though when it comes to detail and overall fit and finish, it has some room for improvement.

What Are SLA 3D Printers?

SLA, short for stereolithography, is a 3D printing technology that uses resin liquid, an LCD filter and a quartz laser to build your 3D model layer by layer. By shining the laser through the LCD filter over a wet layer of resin, it will harden the thin layer of resin in the necessary shape.

After repeating this process thousands of times, you end up with a 3D model. MSLA, short for masked stereolithography, uses an LED light instead of a laser, and in some cases, a monochromatic LCD filter, which leads to cheaper printers and quicker print times.

FDM vs. SLA: Which Is Best?

Generally, for hobbyists and beginners, FDM printers are preferable since they are cheaper and easier to maintain, while SLA printers can give professionals the specificity they desire.

Professionals who are only using a 3D printer for rough prototypes will likely be fine with FDM, especially since higher-end models can support different types of filament material and even employ a dual-extruder design.

However, MSLA technology has become extremely affordable in recent years, and some may prefer the greater detail afforded by the technology, especially if you’re looking to show off 3D-printed models to clients or create something you can display on a shelf.

With that in mind, we’ve rounded up the best 3D printers you can buy in 2021. And whether you’re a beginner, a prosumer, an industrial wizard or a teacher, there’s a 3D printer here that is sure to suit your needs.

If you’re a home tinkerer who mostly views 3D printing as a hobby, but is still skilled enough to create prototypes that serve an actual purpose, the Monoprice MP Voxel 3D Printer is the best 3D printer for you. This well-rounded, FDM 3D printer is versatile, able to use PLA or heavier-duty ABS filaments as the printing material. When it comes to performance, the MP Voxel has a respectable printing resolution that can get down to 50 microns and offers a build volume of 329 cubic inches (6.9 in. x 6.9 in x 6.9 in).

While the Monoprice MP Voxel is primarily designed to be used with its own user-friendly software, you can get this up and running with other modeling programs (like Ultimaker Cura and Simplify3D) with a few tweaks of your own. While there are 3D printers out there that are more technically capable, even by hobbyist standards, we love the combination of a relatively affordable price, solid performance and accessibility. This is why it’s our top pick for the best 3D printers. 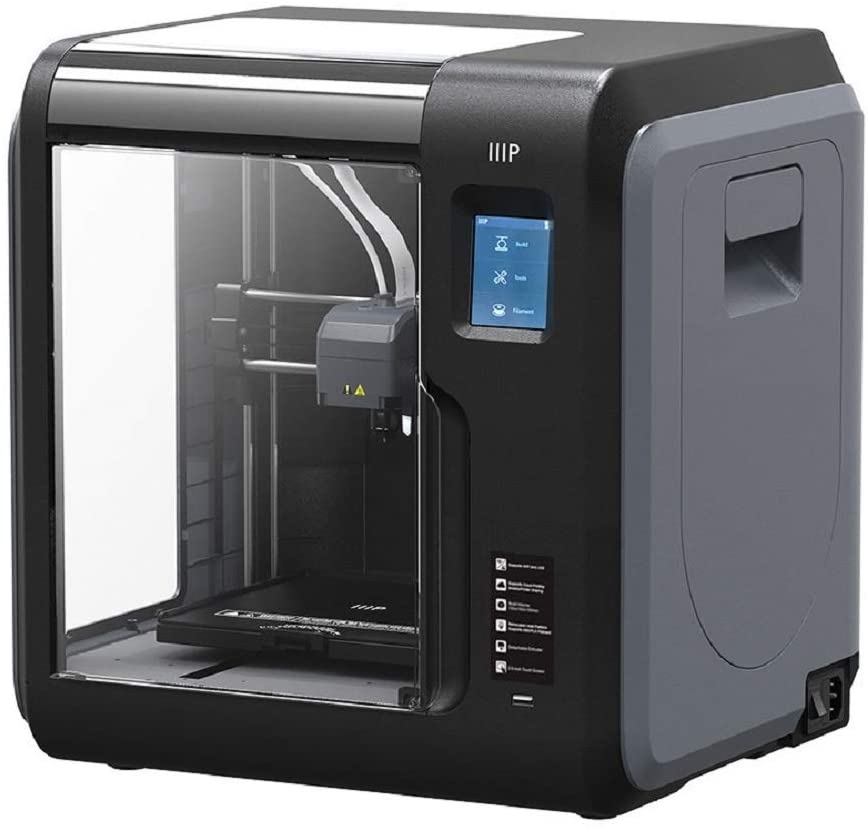 Whether you’re running an engineering or architecture firm, in charge of a STEM program at a school or just want to step up your home 3D printer game, the Dremel DigiLab 3D45 printer is a great FDM upgrade for virtually anybody. With a 4.5-inch touchscreen and intuitive software based on Cura, and an enclosed chamber with a carbon filter to keep fumes from escaping, anyone can be safely printing 3D objects in a matter of minutes.

But there is also plenty of power and advanced functionality contained in the DigiLab 3D45. For starters, it’s optimized to handle four different types of filament plastic (nylon, PETG, Eco-ABS and PLA). It has a resolution that goes all the way down to 50 microns. And for the ambitious creators out there, it has a well-sized 402-cubic inch build volume (10 in. x 6 in. x 6.7 in.). 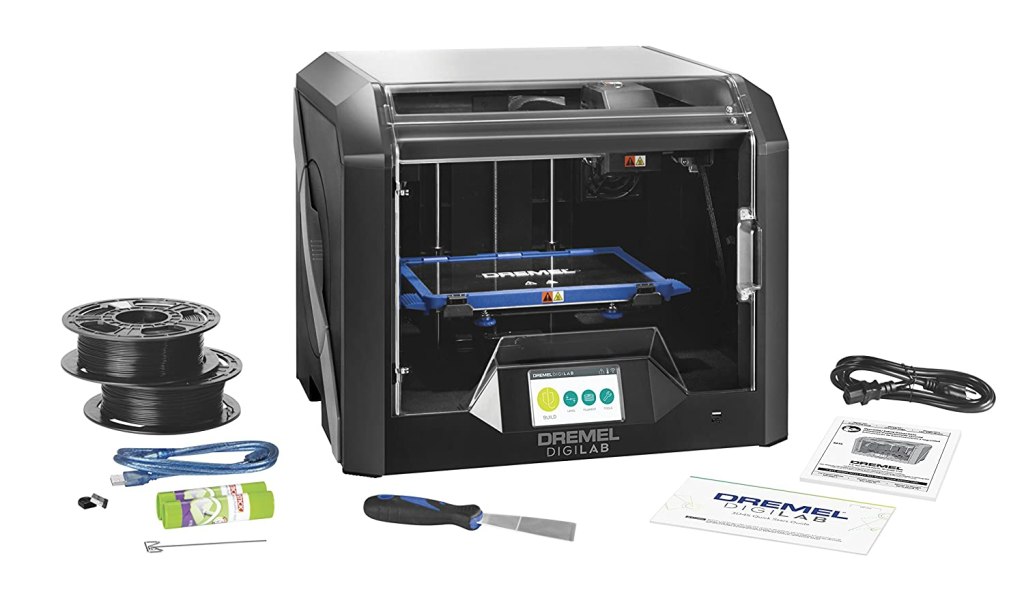 If you’re looking for a 3D printer that can handle a more intense workload than the Monoprice MP Voxel, the Prusa i3 MK3S+ is an excellent FDM choice when it comes to the best 3D printers. The i3 MK3S+ uses PLA strands of thermoplastics and also an impressive set of specs. This includes resolution and accuracy to 50 microns, a spacious build volume of 678 cubic inches and a stealth mode for super quiet printing. Even better, they will sell you a disassembled version of the printer for $250 less. That not only saves you money but also gives you another building project to pass the time. 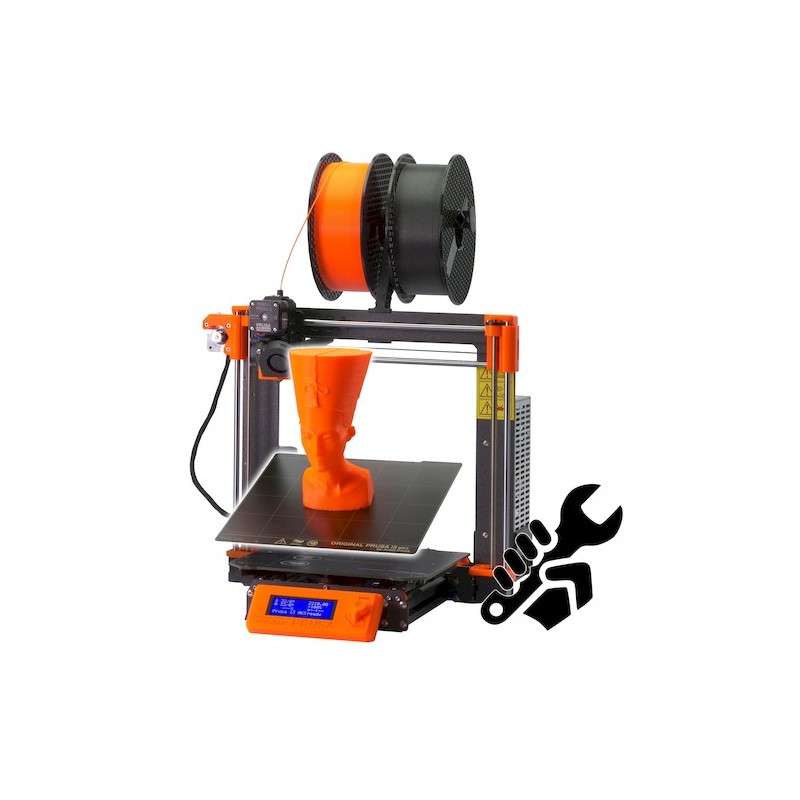 Resin-based SLA 3D printers (and MSLA 3D printers) are typically not favored by hobbyists due to the fact that they’re slower, more expensive in every regard. But if you want 3D models with more detail and a more polished final look, then you’re in the market for one of these printers. In recent years, a number of smaller MSLA models have popped up which greatly reduced the price and sped up printing times (the tradeoff, however, is a minor step down in printing resolution). Of this new wave of smaller MSLA devices, the Elegoo Mars 2 Pro is the best 3D Printer you can buy.

Like other MSLA 3D printers, the Mars 2 Pro shines a UV led through a monochromatic 2560×1440 LCD masking filter to generate the shape for each layer of the 3D model in 2K resolution and cure it in under two seconds. Furthermore, it has an excellent 50-micron resolution and a build volume of 101 cubic inches (5.08in x 3.15in x 6.30 in). All in all, the Elegoo Mars 2 Pro is great for a jewelry maker or toy modeler who is getting into 3D printing for the first time and perhaps wants to see what it’s about before moving onto a more expensive machine. 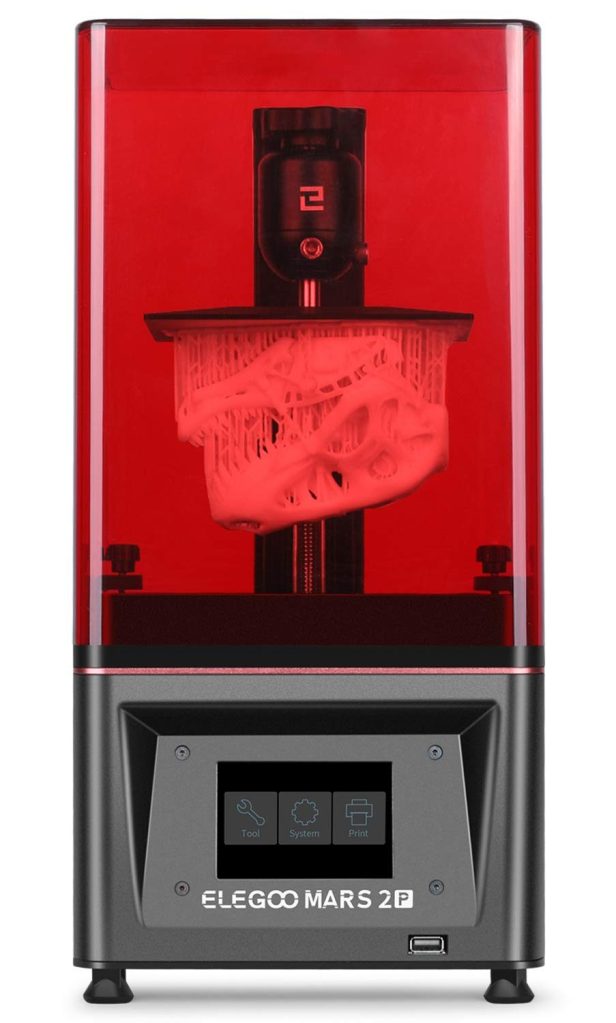 Those looking for one of the most capable SLA 3D printers that won’t break the bank should take a look at the Anycubic Photon Mono X 3D printer. Like the Elegoo Mars 2 Pro, this printer uses a monochromatic LCD during the printing process. This helps to reduce costs and speed up the curing process over traditional SLA 3D printers, such as Formlabs’ Form 3. But unlike the Mars 2 Pro, this LCD is 3840 x 2400 pixels, and instead of an LED-based UV light, this uses a matrix of UV quartz lasers to cure each layer. When combined with the 50-micron print accuracy and resin-based materials, you end up with hyper-detailed, high-quality 3D models.

Of course, the Photon Mono X will cost more than your average MSLA printer, but it’s a step up in quality and also has a considerably larger build volume of 165 cubic inches (9.8 in x 4.7 in x 3.6 in), which makes this a great 3D printer for the experienced prosumer who may not need a machine that costs thousands of dollars but still needs more than what a true hobbyist device can provide. 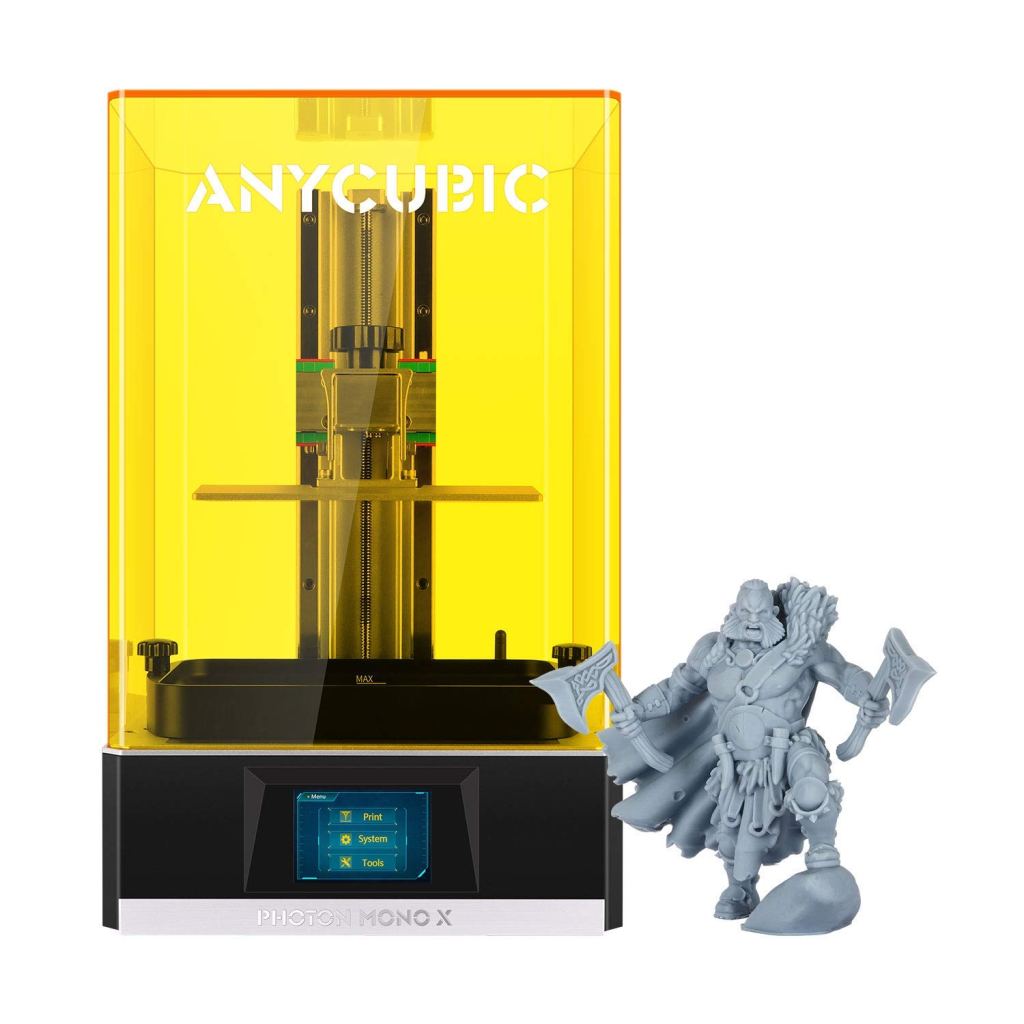 While all of our picks up until now are great for those who have prior experience with 3D printing, most of them aren’t geared towards beginners, both in ease-of-use and price. The Monoprice Select Mini is one of the best 3D printers in both regards, letting you experiment with an easy-to-use FDM printer for less than $250. Not only does it have a surprisingly decent build volume of 104 cubic inches (4.7 in x 4.7 in x 4.7 in), but this 3D printer also works with PLA and ABS filaments, is compatible with popular modeling software such as Cura and Repetier and even comes pre-loaded with 3D models so that you can dive right in without much initial legwork. 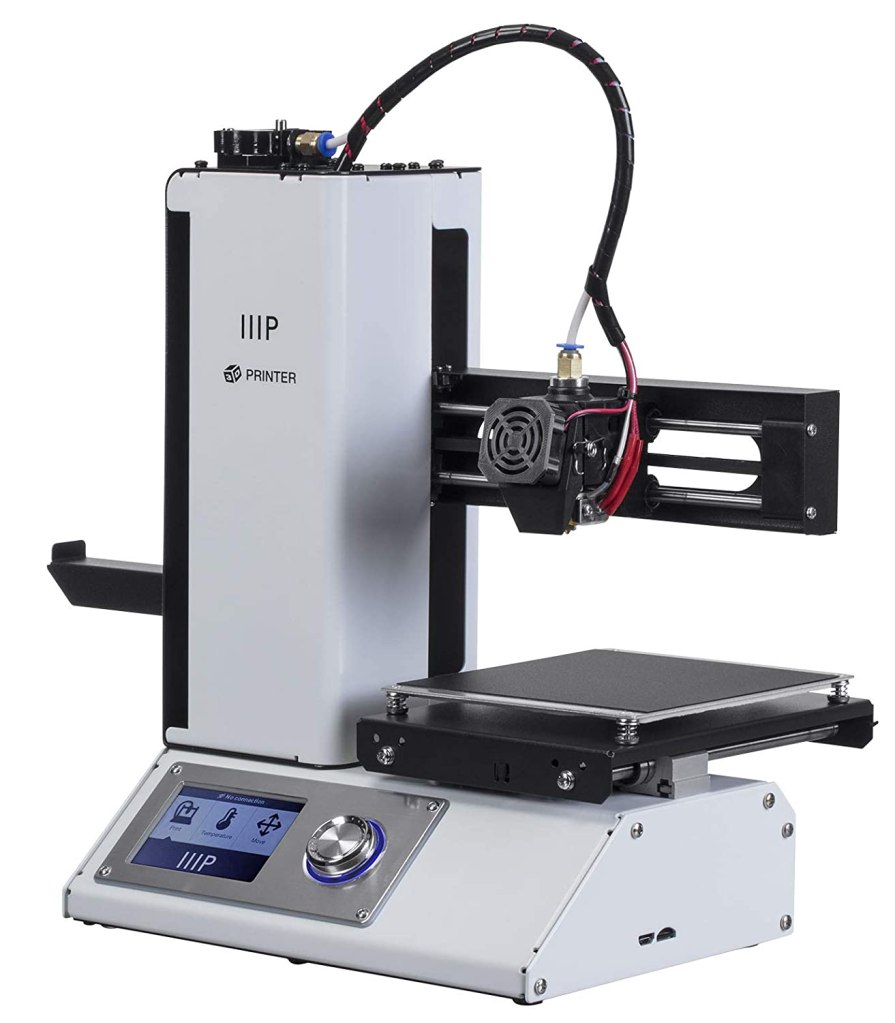 The Crealty CR-10 V3 is an FDM 3D printer that offers a lot of power and flexibility thanks to its open frame design. But what really sets this printer apart is the massive build volume of 2186 cubic inches (11.8 in. x 11.8 in. x 15.8 in.). For the price, you won’t find a 3D printer that will let you 3D print objects this large. And when combined with a direct drive extruder, auto leveler, silent motherboard and support for the Cura and Simplify3D apps, this is easily one of the best 3D printers you can buy. 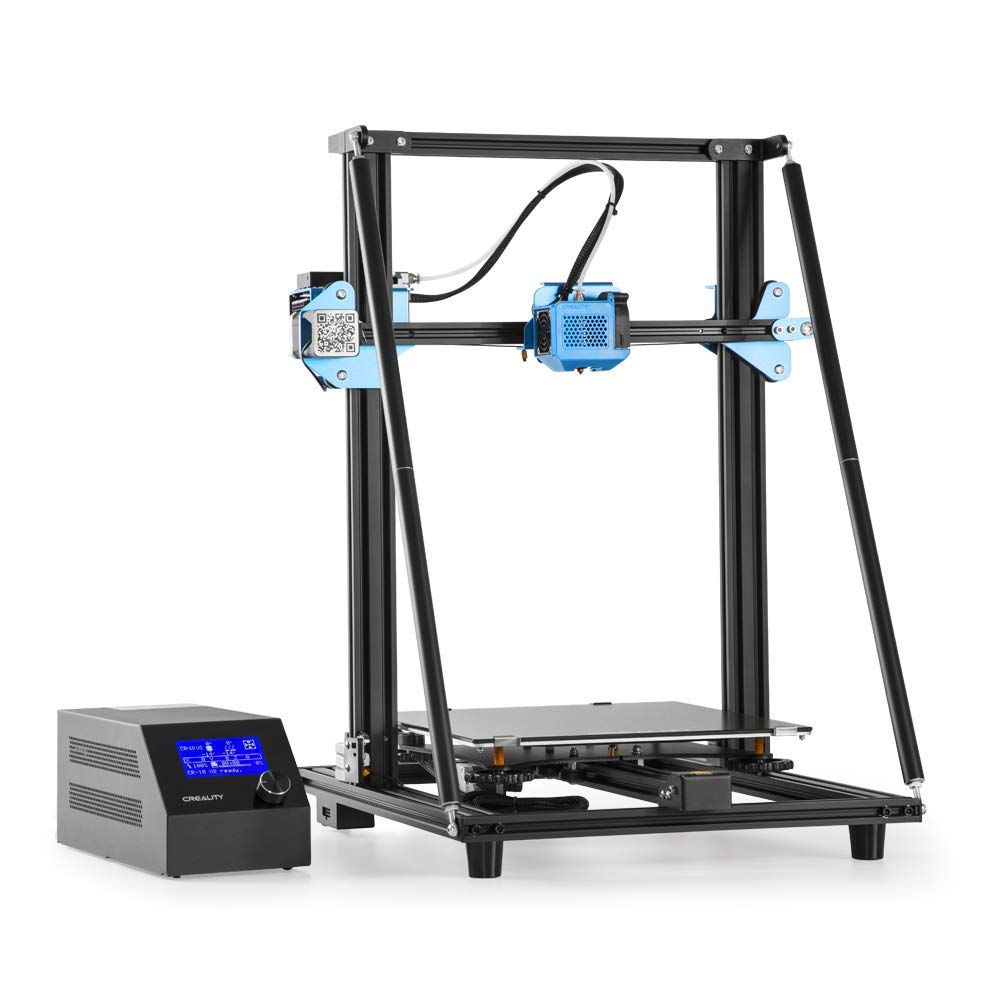 If you are an educator with an interest in purchasing a 3D printer for STEM-related learning, or you’re simply a parent who wants to go all-in on a home curriculum, the MakerBot Replicator+ is the best 3D printer for classroom and educational environments. Offering a huge build volume of 573 cubic inches, this FDM printer comes with MakerBot’s Smart Extruder+ which is less prone to clogging and supports MakerBot’s own ToughMaterial filament as well as PLA.

But above and beyond all that, the user interface, software and overall experience are designed around education and the STEM experience, and as such, there are even lesson plans available for you to use with your kids. While there are many 3D printers that are up to the task on a technical level, you won’t find many that cater to learning quite like the Makerbot Replicator+. 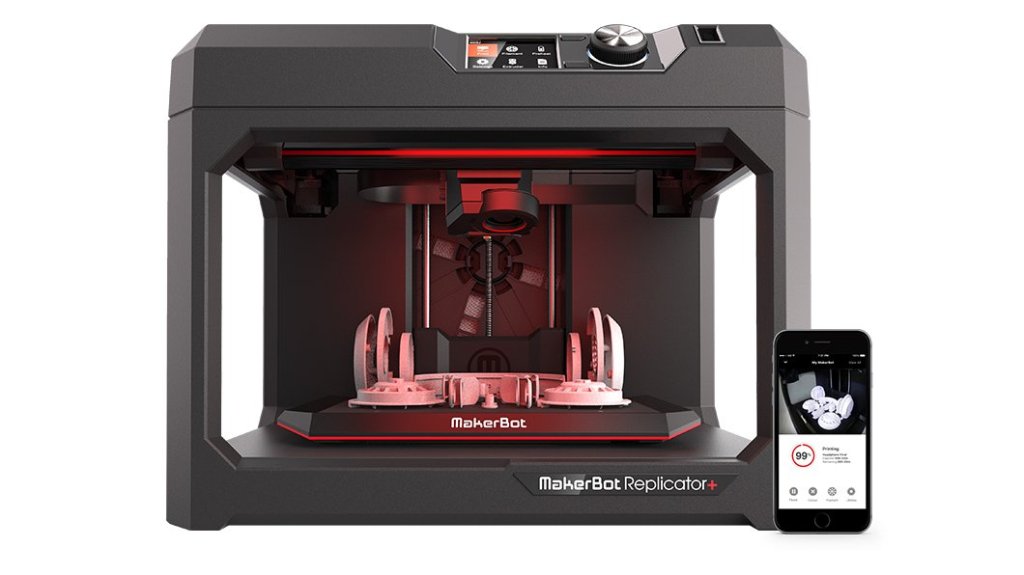 If you are a designer, engineer or any other sort of creative professional who needs a serious machine for prototyping, the best 3D printers for hobbyists aren’t going to cut it. You need a professional-grade 3D printer, and the Ultimaker S5 3D Printer is a top FDM choice. The dual-extruder design not only allows you to use plastics of different colors at the same time, but the Ultimaker S5 also features multi-material support and quick filament spool loading, which allows you to get into some seriously technical prototyping. With a resolution of 20 microns, this 3D printer has some of the best surface quality you’ll find in an FDM printer. And for those who need versatility in the types of objects they can prototype, the S5 has a build volume of 1457 cu. In. (13 in. x 9.5 in. x 11.8 in). 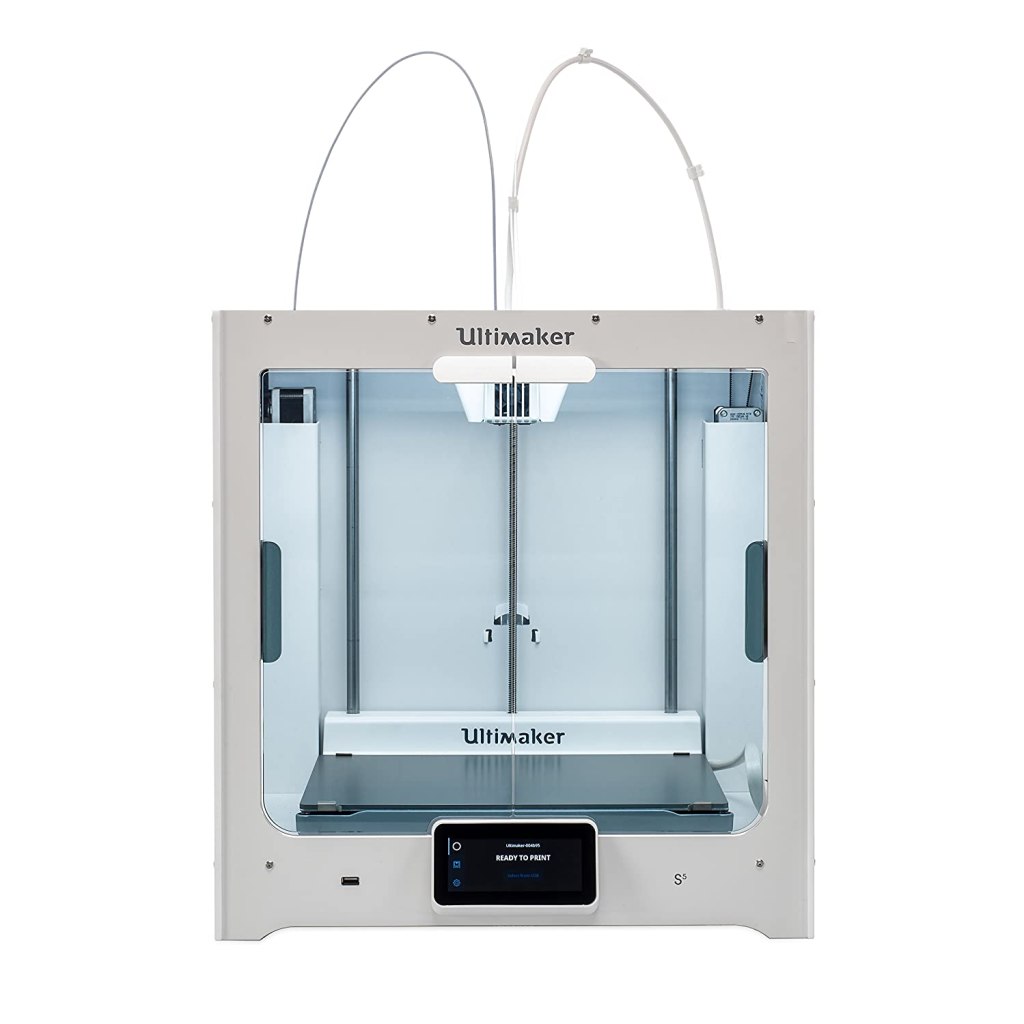 If you want a smaller, slightly less expensive 3D printer that is still very much geared towards professional uses, Formlabs Form 3 is the best 3D printer. Like the Anycubic Photon Mono X, this is a resin-based SLA printer that is capable of highly-detailed 3D models that sacrifice little when it comes to quality. Formlabs were one of the first companies to make SLA printers available to the masses in 2014, so it should come as no surprise that they still lead the pack in 2021. Their software is finely tuned for collaboration and synchronization between employees, and multiple Form 3 printers are able to be linked together as a result.

In terms of performance, the Form 3 uses a 250 mW laser to cure each layer and has a print resolution that can go all the way down to 25 microns, which is better than any printer on this list. Furthermore, it has a generous build volume of 237 cubic inches, which hits a sweet spot between a small 3D printer for hobbyists, and an all-out industrial-grade 3D printer that would only fit in a workshop. As such, this is a great choice for any serious creative professional looking to take their 3D prototyping to the next level. 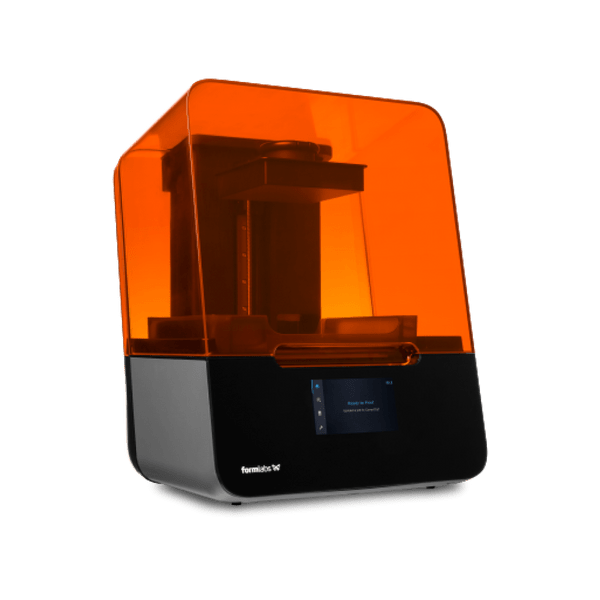 If you want a heavy-duty, professional-grade option that offers all the bells and whistles, the Ultimaker S5 is one of the best options you can buy.

The 7 Best VR Headsets You Can Buy Right Now