The weekly card game has many potential buzz-killing moments. The beer runs out. Someone starts coughing. The guy who shows up and wins three hands and gets that sudden “text from his wife to come home.” And — every game has one — the guy who can’t shuffle cards to save his life. Dude, it’s not that hard.

But, you know, he’s a good guy, and he’s also a lousy player who reliably dumps money into the pot every week which on a good night ends up in your pocket. So don’t kick him out for being a lousy shuffler and don’t enable him by shuffling for him. Pick yourself up an automatic card shuffler instead.

Shuffling machines were invented in the late 1800s when card games could be a life-and-death situation, especially if somebody suspected you of dealing from the bottom of the deck. Back then, and late

r when casino gambling took off in Nevada after World War II, the problem wasn’t clumsy guys who didn’t know how to shuffle. It was ensuring a clean and thorough shuffle every game, to ensure nobody was getting an unfair advantage — except for the house, of course.

There are manual shufflers and electric shufflers, but take care to note whether or not they require regulation poker-sized cards. Odd-sized cards will jam many shuffling machines. Just to be sure, pick up a 12-pack of regulation poker decks while you’re at it.

We’ll assume nobody in your regular game knows how to duck aces or deal from the bottom. But an automatic shuffler keeps the game moving and gives your game a pro feel. If you’re playing poker, you can have a new deck shuffled and ready to go before the last deck is cleared away. If it’s blackjack night, some shufflers hold as many as six decks, just in case Rain Man crashes the game. Check out these five great options:

Manual shufflers may not look or sound as cool as the electric models, but they’re quieter and less prone to jamming. The CHH “Welcome to Las Vegas” two-deck manual shuffler may have the iconic Vegas roadsign on the top, but it can shuffle cards from other games as well, like Uno. This model is plastic and weighs less than a pound without cards, but it’s a big seller on Amazon with an impressive 4.3-star average rating. It could not be more simple: put a deck in each end (or half a deck if you only need to shuffle one deck), turn the crank, and a shuffled deck falls into the plastic tray, which you then pull out when it’s time to deal. Simple is good. 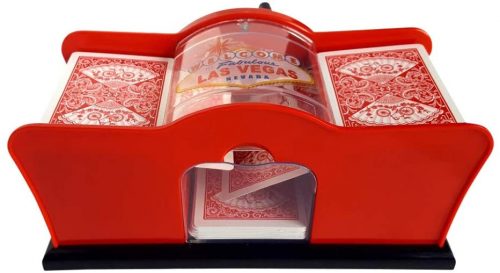 Brybelly is a titan in gaming and gambling supplies, so it’s not a surprise that they make the best big-capacity automatic shuffler around. This six-deck monster runs on four C batteries and gives you a fast, fair shuffle whether you’re using one deck or six and anywhere in between. It fits all standard-sized cards like the Brybelly cards linked above, along with Bicycle and other major brands. It’s a simple press-and-go operation. Perfect for multiple-deck games like blackjack or baccarat, single-deck gambling games like Texas Hold’em, and even trading-card games like Magic the Gathering and Pokémon. It’s made for speed and volume and keeping the game moving along. 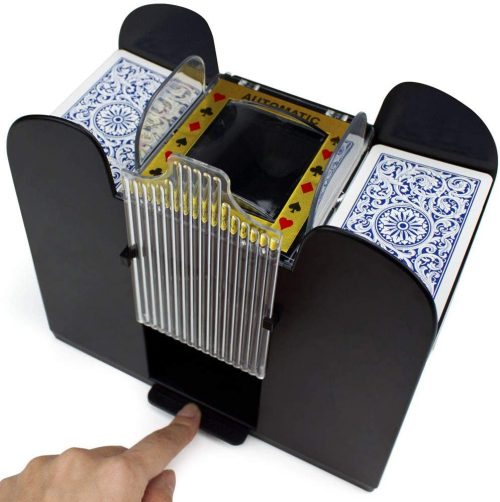 The Trademark Poker Six-Deck Dealer, like the Brybelly, runs on four C batteries and gives you one-touch shuffling of between one and six decks of cards. The difference we like is the fact that it’s not as picky about what you feed it. The Trademark Poker machine, in addition to regulation poker cards, can also shuffle the more narrow bridge-style cards. Which makes this an ideal gift for any older relatives who are bridge players. Older hands lose their dexterity, especially when arthritis is involved, and shuffling cards is a big part of playing bridge. Let the Trademark Poker machine take over the work for your older bridge-loving friends or relatives and let them get back to just enjoying the game. 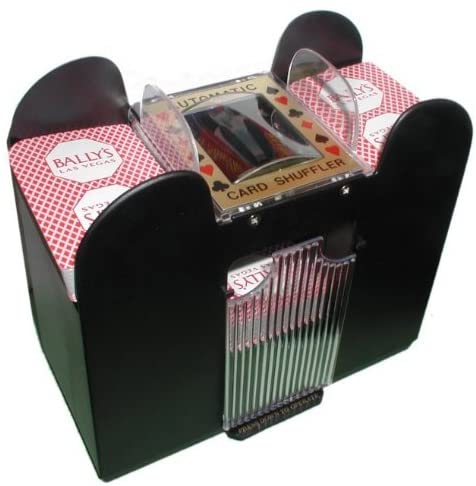 On first look the Laser Sports Casino Deluxe Automatic Four-Deck Shuffler looks pretty much like any other automatic shuffler. If anything the four-deck capacity gives it a slightly smaller profile than the six-deck models. The subtle difference is what you hear when you press the shuffle button: not much. That is to say, the motor in this shuffler runs with appreciably less noise than many of its competitors. Do you have one of those super-serious guys in your game who gets pissed off by “distractions” and noise? This is for him. 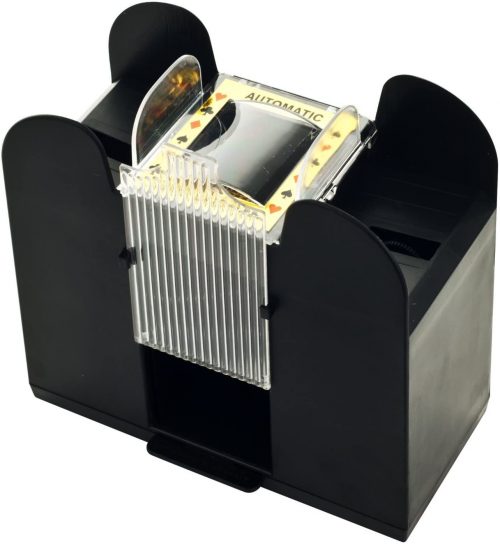 You’re probably thinking the same thing we are here. A $650 shuffler had better be able to shuffle the cards and bring you drinks while wearing one of those cocktail-waitress dresses you see on The Strip. But believe it or not, a Vegas-level professional shuffling machine can run well over $10 grand. Have no doubt, this is a pro-level machine, with multiple settings that make card counting nearly impossible. For example, button 3 is the “Casino Dealers Shuffle:” two riffles, one strip, and one more riffle. Button 7 is the full randomizer: two riffles, a strip, and five more riffles. It runs on AC power, not batteries, and shockingly it will give you that crazy pro-level randomization on only one deck at a time. Maybe you’re a high roller or want to be one enough to drop $650 on a one-deck shuffler. Have at it, we’ll be over here in our friendly weekly nickel-dime-quarter game. 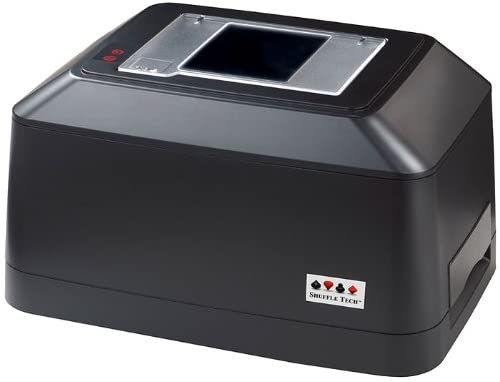