As every gamer knows, some games just aren’t designed for keyboard or phone play. Controllers have been a ubiquitous part of console design for ages, for one simple reason: they work. There are several things you should consider when buying the best Bluetooth game controller:

First and foremost, make sure your controller will work with the games you want to play. Certain games have been known to only work with specific brands of controllers. Comfort is another major area of focus; you’ll be playing for hours on end if it’s a good game (looking at all of you binging Elden Ring right now). Accessories are another major consideration; can you change button mapping? Does it have additional paddles? Finally, does the controller require a specific program or is it plug and play?

Once you’ve figured out all of the above, take a look through our list of the best Bluetooth game controllers for PC gaming and beyond.

If you want complete customization in a controller, it’s hard to beat the Xbox Elite Series 2. It’s one of, if not the absolute best Bluetooth controller available. Every aspect of this controller can be customed, from the shape and length of the sticks themselves to the sensitivity of aiming. You can swap out the rounded thumbpad for a proper D-Pad, save up to three different custom profiles on the controller, and change button mapping on the go.

The only parts you can’t change are the face buttons. The controller has a 40-hour battery life and can be recharged through USB-C. If you’re a competitive gamer and enjoy sinking your teeth into shooters or other games where you want near-total control of your experience, the Elite Series 2 is your best option. 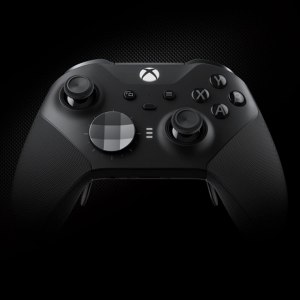 The 8BitDo Pro 2 looks like a combination between the Nintendo Switch Pro Controller and the Sony DualSense. It includes a full set of buttons, including R3 and L3 buttons, and comes bundled with its own software for firmware updates and remapping. There are buttons on the back of the handles that you can program to any function you want.

The 1,000mAH battery gives about 20 hours of playtime before this Bluetooth gaming controller needs to be recharged. The analog stick layout is perfect for everything from shooters to fighting games, while the D-Pad is perfect for diving back into your favorite retro titles. 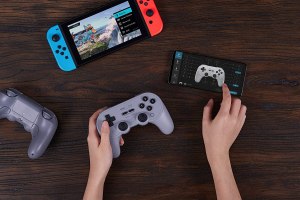 Xbox has spent years refining its controller design, and it shows in the standard controller for both the Xbox One and the Xbox Series S/X. Not only is it easy to set up and detected by default on most Windows PCs, but the controller provides an incredible amount of comfort whether you’re putting miles into Forza Horizon 5 or exploring Skyrim for the 10th time.

The downside is that it requires actual batteries and doesn’t have a rechargeable pack. You can invest in rechargeable AAs, but that’s an extra expense out of pocket. 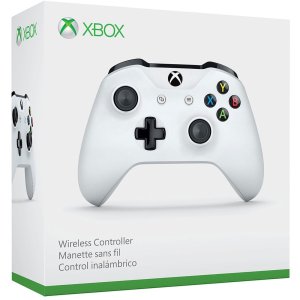 If you’re looking for a way to play mobile games with a controller, the Razer Raiju Mobile is the answer. It’s has the same layout as an Xbox controller, but with a built-in phone clamp. If you want to rack up the points in Fortnite on your phone, use a controller like this one.

The Razer Raiju has a hair-trigger mode to give you a competitive advantage, and the phone mount can be adjusted to hold phones at different angles. You can even adjust the aiming sensitivity of the analog sticks, with the option to fine-tune it with the touch of a button. This means you can slow down your sensitivity on the fly during shooters. 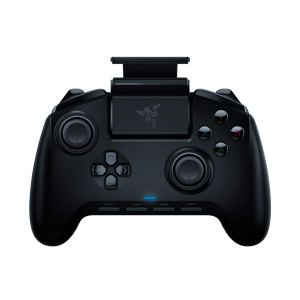 If you want all the customization that comes from the Elite Series 2 without the threat of it breaking on you, especially given the rumors of them breaking down after a set amount of playtime, then the SCUF Instinct Pro is another alternative. It has many of the same functions, including adjustable triggers, remappable paddles, and up to three separate profiles.

You can also choose to customize this controller before you even buy it, choosing between different thumbstick and faceplate colors. While it costs about the same as the Elite Series 2, it’s third-party and works great for PC and mobile gaming. 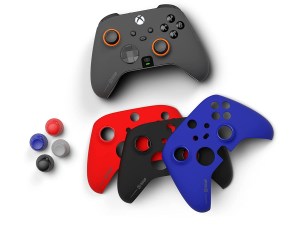 If you play games primarily on Apple devices like the iPad, iPhone or Apple TV, you might find that many of these controllers don’t work as well as they should. The SteelSeries Nimbus is designed specifically for Apple products, making it the best choice for gamers that want to ensure performance. It’s specifically said to be Fortnite-certified.

All the buttons are pressure-sensitive, and the design resembles that of a Switch Pro controller. In addition, the SteelSeries Nimbus boasts 40 hours of battery life and has four front-facing LEDs that show which player you are during multiplayer games. 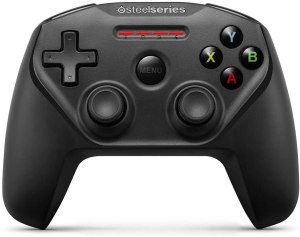 Let’s face it: a lot of modern controllers just don’t feel right when playing retro titles, especially those for older consoles with unique controller layouts. The Sega Genesis/Mega Drive is one of those layouts. The 8BitDo M30 fits the design of a standard, six-button controller that’s perfect for anyone firing up RetroArch to spend some time with Nights Into Dreams.

Best of all, this Bluetooth controller for gaming is compatible with Switch, PC, macOS, and Android. It also has a built-in turbo function and upgradeable firmware to keep it active and operational for years to come. 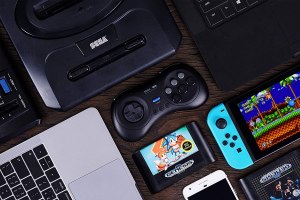 Although Google has shuttered its Stadia development studios, it’s hard to ignore the controller. Stadia might have been a disaster from the start, but the controller is well-designed and one of the absolute best ways to play mobile games. It works great for Android and Chrome-based games, and there are workarounds to get it working with other types of games — although those don’t always work.

It has a single-touch button for capturing screenshots and a 3.5mm jack for headphones, but only has 10-hour battery life. You’ll need to charge it often if you’re a frequent gamer. 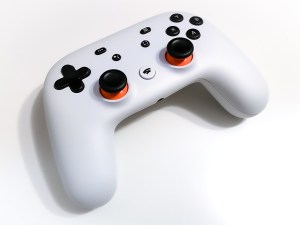 Hack Your Battle Station With the Best PC Gaming Accessoires