While you likely already have a smoke detector in your home or apartment, it may not be one that detects carbon monoxide (CO). You might wonder if you need a carbon monoxide detector, and the short answer is: yes, you do. Dryers, gas stoves, fireplaces and water heaters can all potentially emit carbon monoxide, and there’s a good chance that you have one (if not all) of these units in your home.

The reason that carbon monoxide is so dangerous is that unlike a regular fire, where the signs will be heard, smelled and seen, carbon monoxide emits no odor or visible fumes. And, because the symptoms can just feel like fatigue or a headache, it’s possible to ignore the warning signs until it’s too late. Thankfully, carbon monoxide detectors are the affordable answer that will buy you peace of mind and help keep you safe.

Even if you have a smoke alarm that detects carbon monoxide, you might want a standalone carbon monoxide alarm to cover any rooms that are out of your fire alarm’s range, such as your garage or the basement. These rooms often house appliances that can emit carbon monoxide, such as clothes dryers or water heaters. If you live in a large or multi-level home, a single smoke or CO alarm may not be enough for every part of your home. That’s why it can be prudent to buy a few different kinds of CO alarms.

How We Chose the Best Carbon Monoxide Alarms

One factor to consider with plug-in detectors is placement. Carbon monoxide is lighter than air and rises, while outlets are typically close to the floor. That’s why some plug-in options come with cables that allow you to plug them into the wall socket while mounting the actual detector higher on the wall. If you’d rather replace your smoke detector entirely, we’ve included some options that hardwire into the ceiling. There are a variety of options to choose from, These are the best carbon monoxide detectors to get.

Kidde is a leader in the hazard detection business, and with this alarm, they make it easy to make sure your air is carbon monoxide-free. It will sound the alarm when dangerous levels of CO are detected automatically. It’s battery-operated, so you don’t have to do any hard wiring to get it to work. 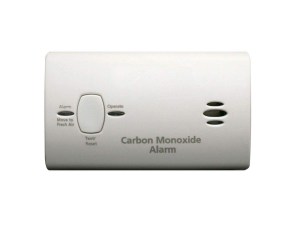 A ringing alarm is a great way to keep yourself safe while you’re at home, but what about when you’re away? This detector from Google Nest connects to WiFi and can send alerts to your phone. It detects both smoke and carbon monoxide and has a ringing alarm in addition to the WiFi-enabled alerts. Nest’s smoke and carbon monoxide detector is wired, so it’ll need to be connected to existing cables. There’s also a battery backup. 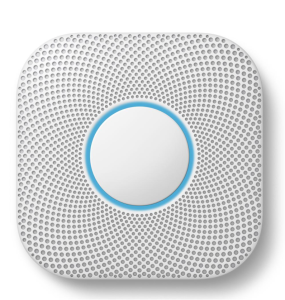 Many of the options on this list are designed as a supplement to your existing smoke detector and only detect carbon monoxide. This option from First Alert detects both smoke and carbon monoxide. It’s battery-operated rather than wired, making it easy to set up. 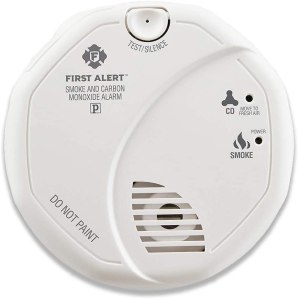 This carbon monoxide detector is a bit more elaborate. The digital display allows you to keep tabs on the CO level in your home, measured in PPM, parts per million. It has a peak level memory display showing when the highest concentration of CO occurred. This model is also battery-operated and features onboard LED lights that flash green when all is good and red when the alarm is going off, so there’s never any confusion. 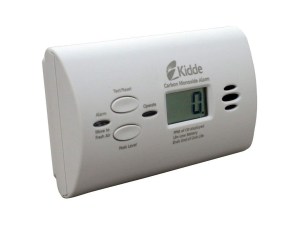 If you’re looking to replace your existing smoke detector with one that detects both smoke and carbon monoxide, this option from First Alert is a great option. It’s designed to be hardwired for continuous power, and the battery backup has you covered in the event of an outage. The detector has a variety of different alarm tones, so you can differentiate between an immediate emergency and a low battery warning. 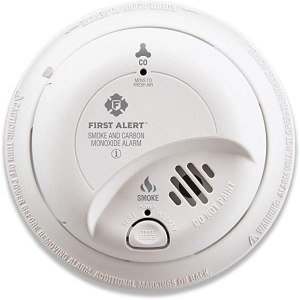 Imagine if someone could tell you exactly when and what type of hazard has reached dangerous levels in your home. Think about how safe you would be. That’s what this combination Smoke/Carbon Monoxide Alarm does. It has a voice alarm system that announces “Fire!” when smoke or fire is detected. It announces “Warning Carbon Monoxide” when there’s a CO hazard. 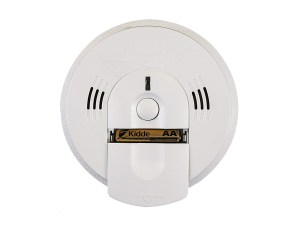 This First Alert Dual-Power Carbon Monoxide Detector keeps your family safe using an advanced electrochemical carbon monoxide sensor that sounds a loud, 85-decibel alarm when dangerous levels of CO are reached. It plugs into any standard electrical outlet and has a battery backup feature, so you can always count on it to work. It’s also backed by an impressive seven-year limited warranty. 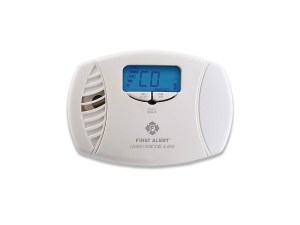 Most of the options on this list will only alert you once carbon monoxide levels are at dangerously high levels, but this option is unique in that it allows you to monitor carbon monoxide levels continuously. It has a simple LED display that refreshes every 15 minutes to display the PPM. It plugs directly into the wall using the AC cord. This allows you to mount the alarm higher on the wall. This unit also detects dangerous levels of explosive gasses like propane and methane. 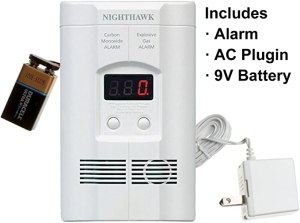 Get an overall picture of the air quality and temperature in your home in one unit with the First Alert CO710 Carbon Monoxide Detector. The CO710 has a built-in lithium battery that provides 10 years of protection for carbon monoxide, with an 85 dB alarm that sounds if CO levels hit an unsafe level. In the event of a power failure, the alarm will continue monitoring air quality levels. The LCD not only displays peak and current CO levels but also provides a digital reading of the current temperature in the home. When it’s time to replace the CO710, a helpful end-of-life alarm will chirp to alert homeowners. 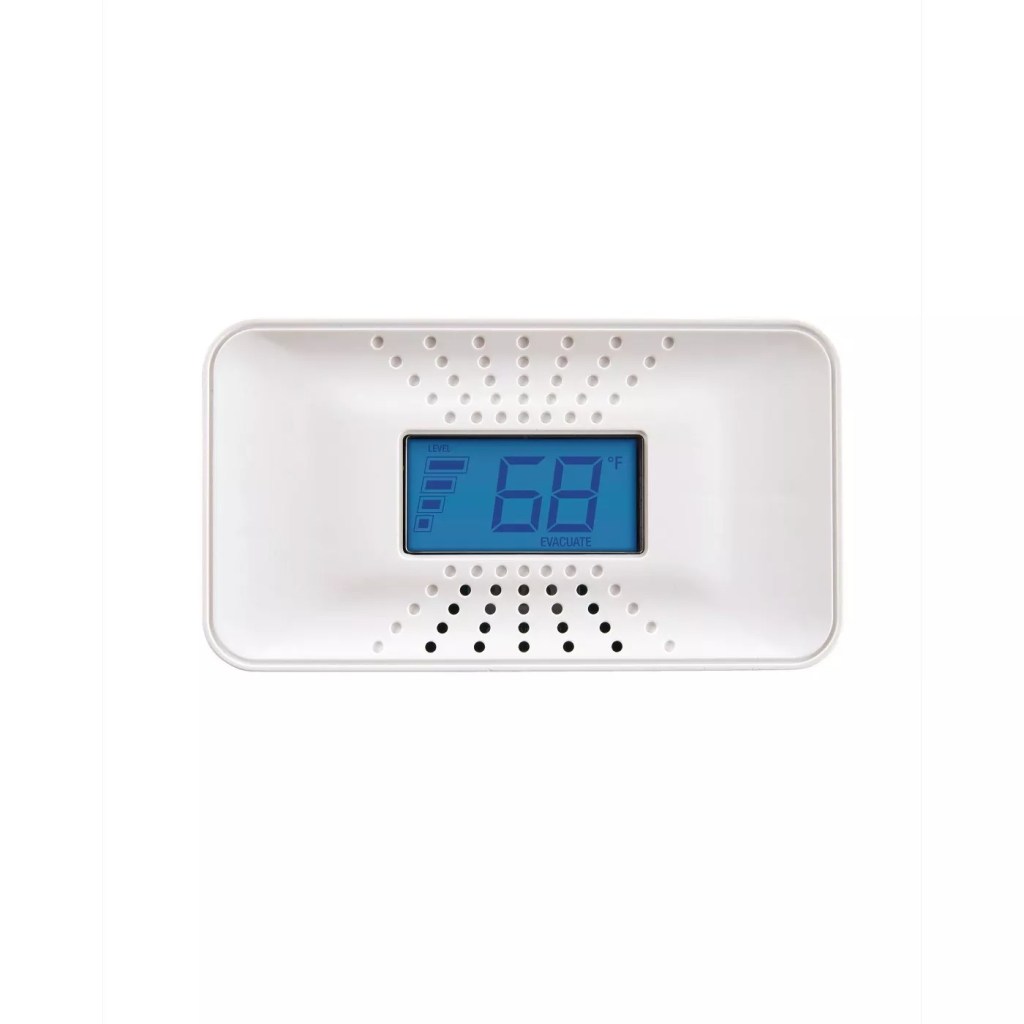 Does your fire alarm go off every time you cook? We get it and we do not judge. Not everyone can be a top chef. Thankfully, the First Alert PRC710 Slim Smoke & Carbon Monoxide Detector has a photoelectric sensor that is designed to detect large smoke particles that are the result of smoldering fires, which means it only sounds the alarm when there’s a ‘real’ fire and not simply a well-cooked meal in the oven. When smoke and carbon monoxide levels begin to rise, the detector will sound its 85 dB alarm. Designed to last, the PRC710 has an impressive 10-year life on the built-in battery. When it is time to replace the alarm, an end-of-life timer will sound. 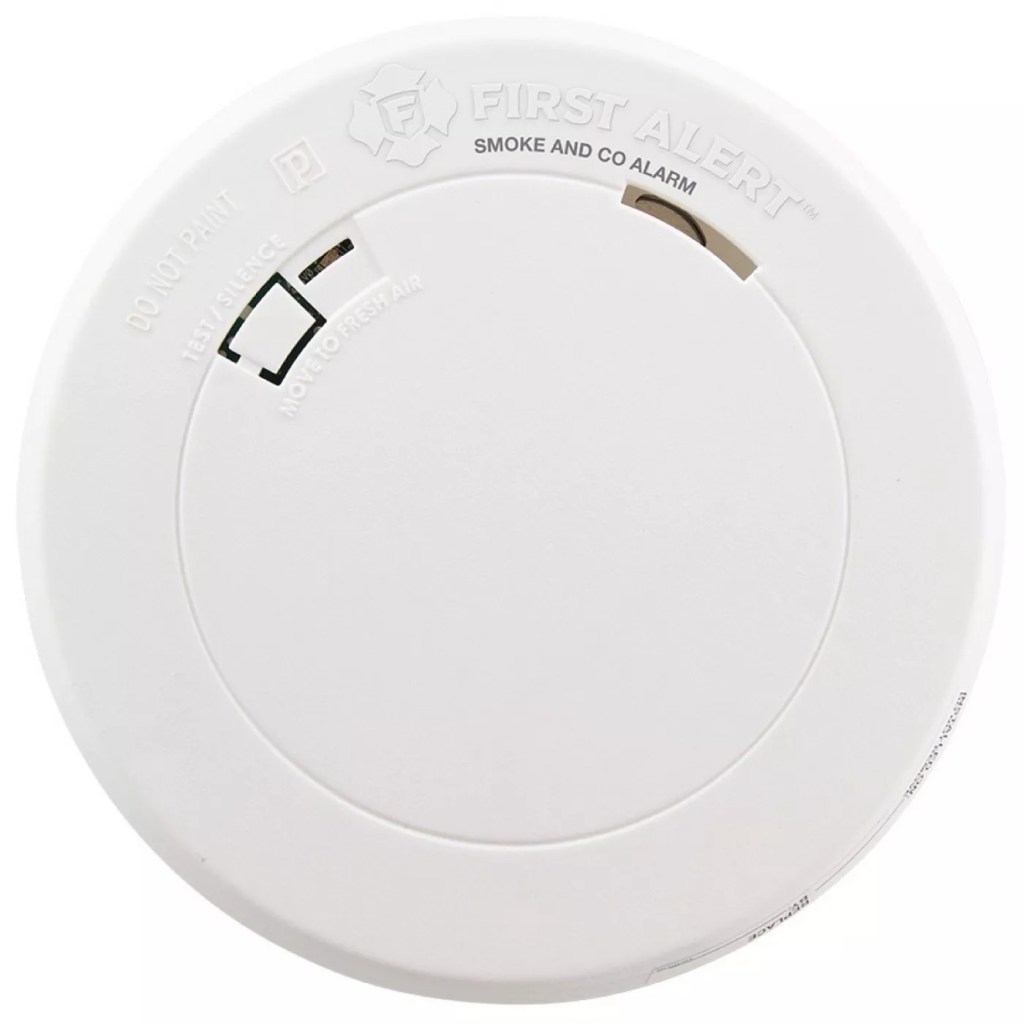 Worried you may miss your carbon monoxide detector’s low battery warning? We get it. That’s why we like the Mighty Rock Carbon Monoxide Detector, which includes a low battery detector alarm that issues a low warning sound every minute until batteries are replaced. When high levels of carbon monoxide are detected, the Mighty Rock will alert users using both a visual LED indicator light and an audio alarm with an 85 dB output. The battery-powered alarm doesn’t require hardwiring and comes with all the necessary mounting hardware for easy installation. 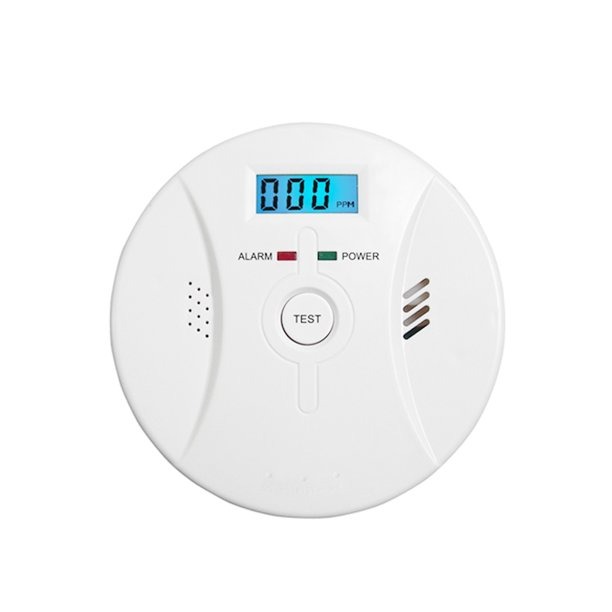 If you have a large home and want to ensure the safety of yourself and your residents, you may want to opt for a two-pack of carbon monoxide alarms. The double pack from GPED has both audio and visual alarms built-in, including a red flashing LED light and a loud 85 dB alarm that will sound if a high level of carbon monoxide is detected. Voice notifications will alert users to the levels in their home and the large LCD screen displays current and peak readings. The alarms are battery-powered and come with mounting hardware. 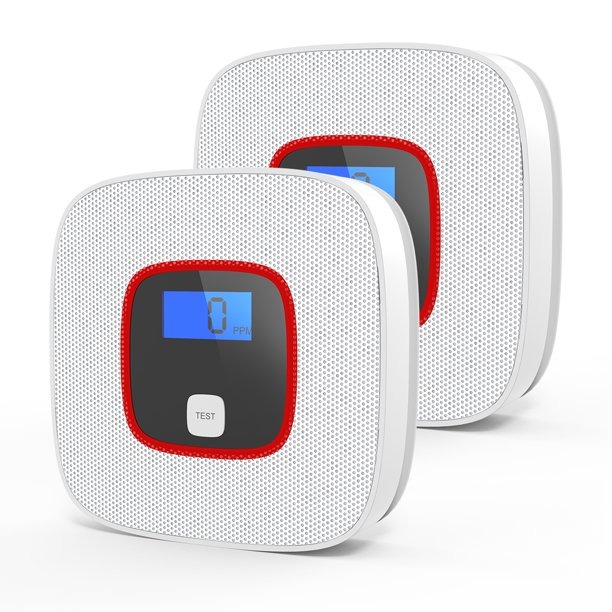 DOUBLES AS A HOME SPEAKER SYSTEM

For a carbon monoxide alarm that pulls double duty, there’s the Onelink Safe & Sound by First Alert. As a carbon monoxide alarm, the unit is powered by First Alert and has built-in sensors for fire and carbon monoxide, with an 85 dB alarm alerting homeowners of danger. Using the Onelink app, homeowners will be alerted of dangers in their homes even when they’re away. The Alexa-enabled alarm, which can also be used by Apple HomeKit, can be voice-activated and doubles as a smart speaker. Users can listen to music, audiobooks, and more through the hardwired speaker, which delivers high-end 360-degree audio. 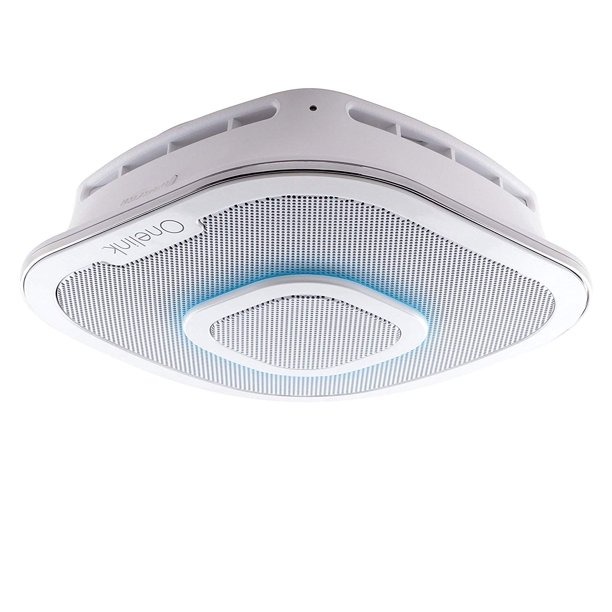 For a carbon monoxide alarm you’ll definitely hear, try the Carbon Monoxide Detector Alarm by Alert Pro. The unit features an 85 dB alarm that will sound if carbon monoxide is detected, helping to instantly alert those in the home to the dangers in the air quality. An LCD display makes it simple for users to check their CO levels in the home and a clearly labeled test button helps to ensure that the batteries and alarm are fully functioning. 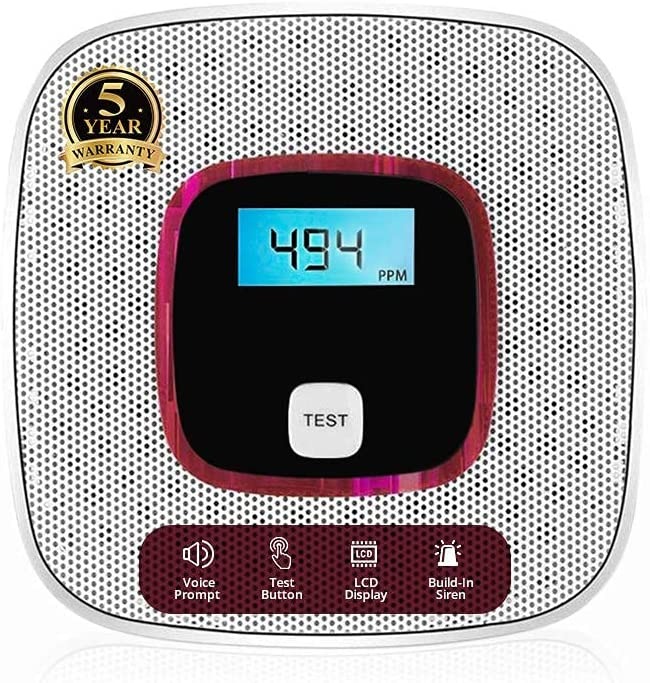 Checking for carbon monoxide poisoning in your home is extremely important, but it’s not the only place you should be monitoring. Thanks to the Forensics Detector Car, Vehicle, Aircraft Carbon Monoxide CO Detector, it’s easy to be alerted of exhaust leaks that could lead to poisoning. The small, handheld unit comes with a 3M adhesive backing that makes it simple to mount in your car, RV, boat, or bus. An audible alarm will sound if levels get above 9ppm and 12-month battery life means you can set and forget about your alarm for an extended period. 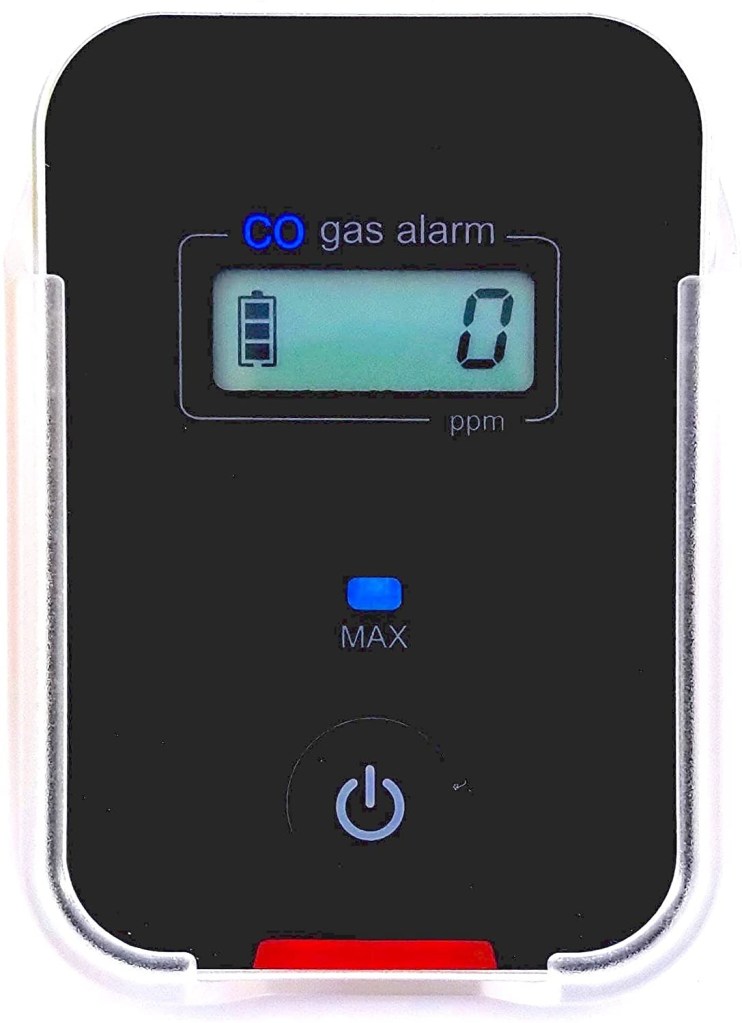 Designed with a catalytic combustion method sensor and an electrochemical carbon monoxide sensor, the Koabbit will alert homeowners if unsafe levels of natural gas or carbon monoxide are detected in the home. An 85 dB alarm will sound and a bright LED light will blink when a high level of gas is reached and homeowners can check their current level anytime on the LCD screen, which is updated every nine seconds. The Koabbit can be plugged into a wall unit and has room for a battery pack to be inserted in the case of a power outage. A push/test button is included to ensure the unit is functioning correctly, helping homeowners rest easy. 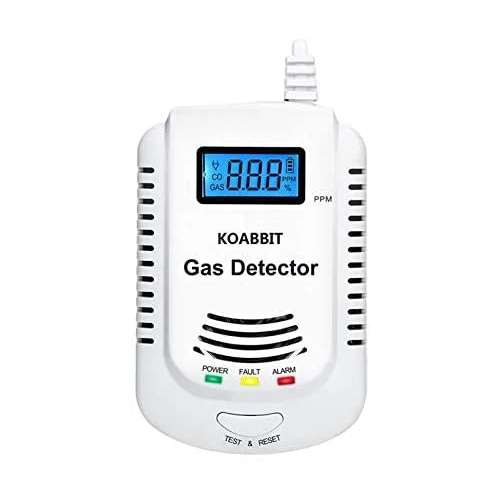 Sound The Alarm: The 5 Best Smoke Detectors To Get Right Now