Harder, better, faster, stronger isn’t just a great Daft Punk song or Kanye West sample, it’s arguably our 21st Century philosophy distilled down into a catchy little earworm. We’re all looking for solutions that can continue to help us do our work faster and better, which is exactly what Google has done with Chrome OS/Chromebooks. For those unaware, a Chromebook is a portable, light, long-lasting and fast laptop that’s primarily cloud-based and takes advantage of Google’s office products like Google Docs, Google Sheets, etc.

That primarily cloud-based system means you don’t have a traditional hard drive to contend with: this helps to cut down not only boot-up times (most Chromebooks load in seconds, not minutes) but the weight of the computer itself too. This helps with portability, making it so that a Chromebook is easy to toss in your work bag and keep it there should anything pressing arise — or to keep at home as a secondary laptop away from the office. And, god forbid, you should drop one or it should break, that cloud-based system means that everything is stored online, so you won’t lose files even if you lose your Chromebook.

While the tech was initially pretty limited, Chromebooks have come a long way since their introduction. So whether you’ve been eyeing one for a while or are brand new to them, there’s a good chance there’s something for your work and play style. Check out the 16 best Chromebooks and get ready to fly through whatever you need to get done.

It boasts two-in-one capabilities, has a large 14-inch display and the processing power to rival high-end laptops — what’s not to love? The display has an ultra-thin bezel maximizing the amount of screen real estate all while making it look sleek and clean. Flip it around to Tent Mode when you want to get a little more hands-on with your work. And when you need to take your work on the go, the 2.5-pound Chromebook is as lightweight as it is powerful. When it comes to Chromebooks, this is the total package. 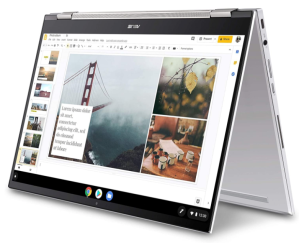 If you didn’t know any better, it could be easy assumed that the Flip was just a standard laptop. But looks are often deceiving. Complete with a 14-inch high-definition screen, 4 GB of computing power for plenty of app usage, a super-thin construction, 64 GB of storage and plenty of ports for you to connect to larger displays when needed, this Asus will outwork your standard-issue company laptop in every arena. With features and specs like this, the Flip makes a strong case to ditch the standard laptop, and invest in a Chromebook — and we can’t recommend it enough. 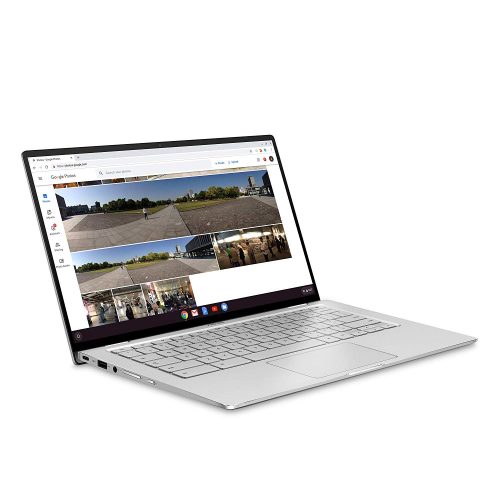 This HP Chromebook is similar to our best overall pick in terms of connectivity and battery life. It even has the same amount of ports including a USB-A and two USB-C, as well as a micro SD for additional storage. And the thin-bezel display maximizes the amount of screen space. It boasts a two-in-one design and can flip all the way around so the back of the display touches the back o the keyboard. So what’s the difference? It’s over two pounds heavier and not nearly as powerful. But, you can save a lot of money if you don’t need the extra processing power. 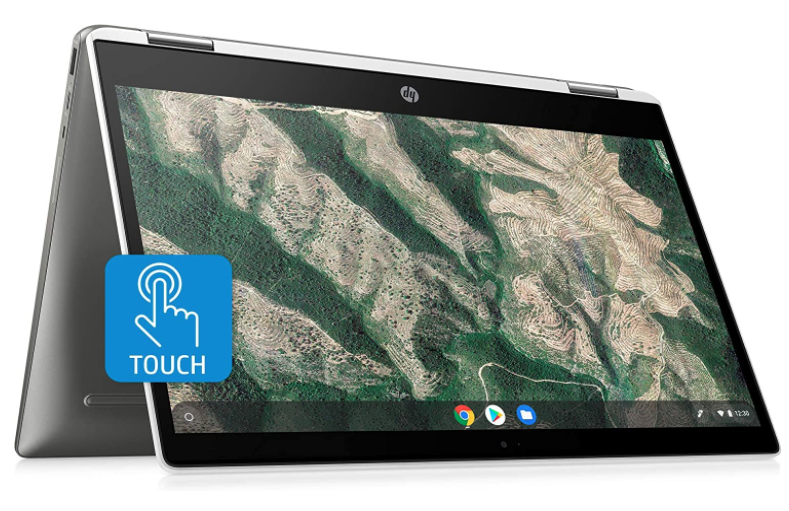 The Samsung Chromebook 4 delivers speedy gigabit WiFi and a welcome large display compared to other Chromebooks. The 15.6-inch display adds a standard laptop experience even though its priced for a Chromebook. The Gigabit WiFi combined with two USB-C ports makes for great connection speed and swift file transfer and downloads. Topped with integration with Google Assistant, not only is this Chromebook fast, but it is also easy to use. 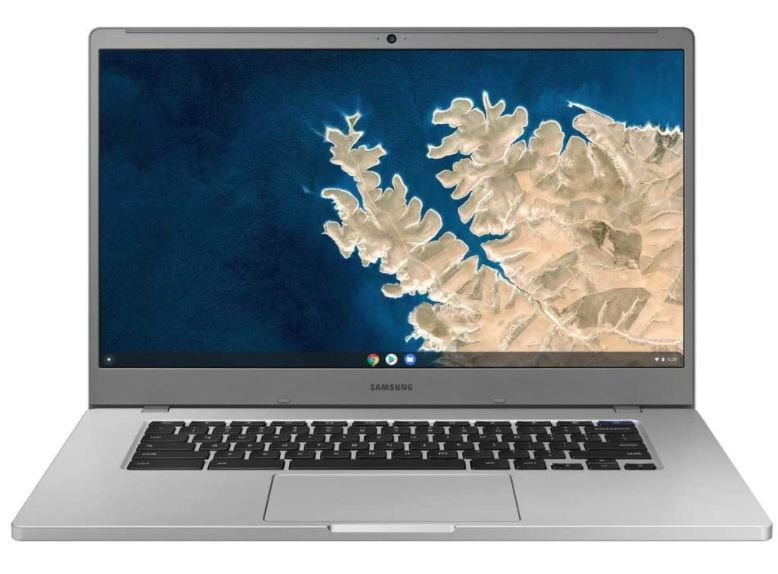 When you don’t need much heavy lifting from your Chromebook, the Lenovo Duet is a great option, especially when you consider the two-in-one form factor. The MediaTek Helio P60T processor and 4 GB of RAM are great for standard browsing and basic computing tasks. Plus, you can expect to squeeze around 11 hours of battery life from the device, which makes it great for those times you’re on campus all day long. The best part, you won’t have to apply for another student loan to afford it. 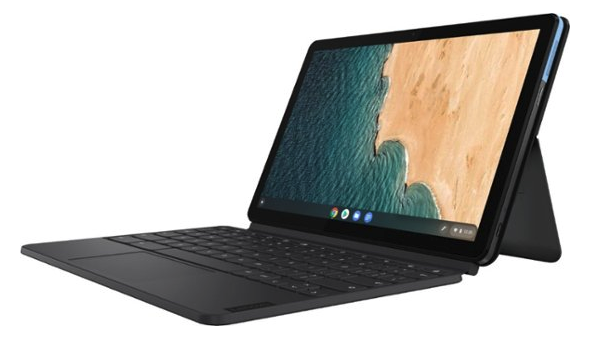 The Samsung Galaxy Chromebook is one of the more powerful Chromebooks you’ll find. Chromebooks are often known for having just enough RAM and storage to complete basic computing tasks. But the 265 GB of storage and 8 GB of RAM is more like a standard laptop. When you throw in the UHD AMOLED display, now you’re talking high-end laptop specs. A stylus comes with the Galaxy for hands-on drawing and editing, and Google Assistant is available when you don’t feel like using your hands. It’s a great Chromebook, but you certainly pay for the extra power. 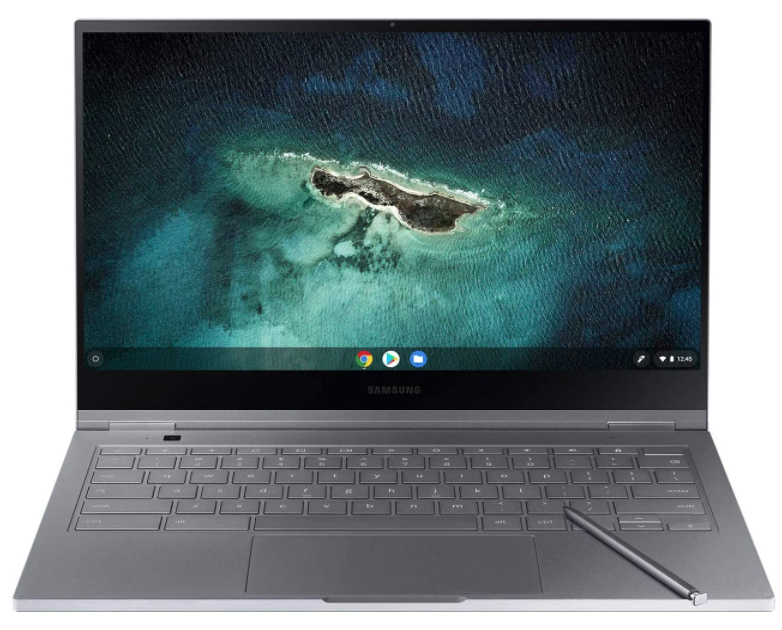 Weighing an impressive 2.3 pounds, and with a ridged grip to keep it from sliding out of your hands when you’re on the move, the Pixelbook Go is great for those who have places to go and people to see. Speaking of being on the go, you can expect about eight hours of battery life to get you through your work or school day, which isn’t the best, but both USB-C ports support quick charging to juice back up in a hurry. When you can finally sit down and work, the keyboard is one of the best you’ll find on a Chromebook. It is pricey for a Chromebook, but it’s worth it for those who carry around their computer all day. 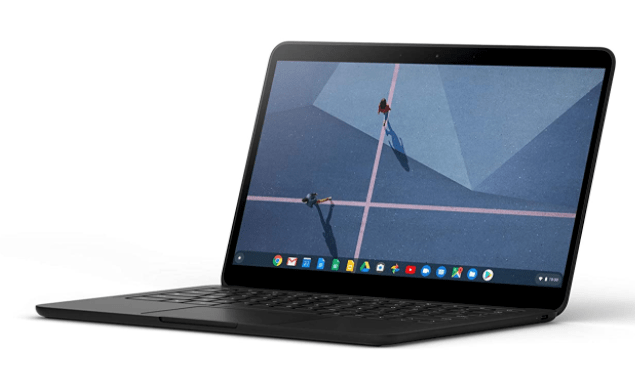 When you spend all of your time in Google Suite, the Acer Chromebook 315 works seamlessly with the Google Platform. Using Chome OS, you’ll be able to take advantage of 100 GB of Google Drive storage as well as Google Docs, Sheets and Slides to complete your daily tasks. Like the Samsung Chromebook 4, it’s one of the few options out there with a 15.6-inch display. It’s affordable, easy to use and starts up quickly, making it a great option for students. 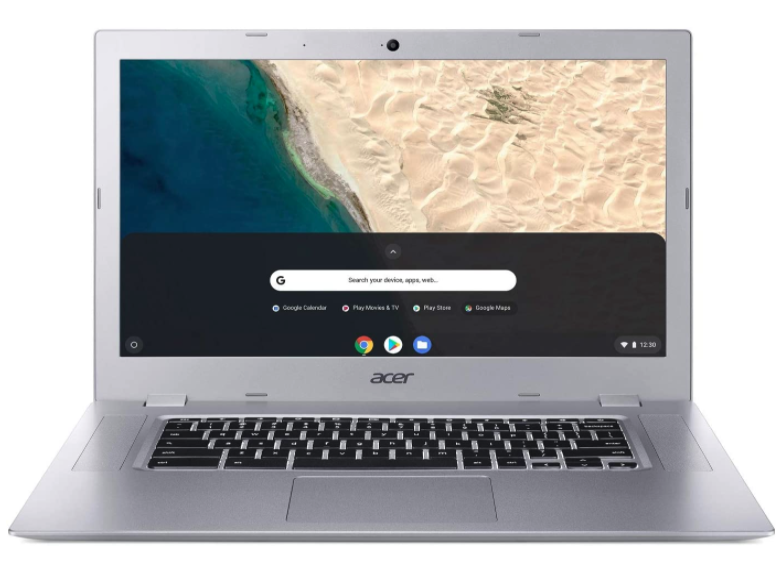 This Chromebook has features you won’t find on others. For starters, there are two webcams. Why you might ask? In addition to the one above the screen, a second in the left-hand corner of the keyboard is great for quickly taking photos especially in the office or in classroom settings. And when you’re in areas where WiFi is spotty at best, the built-in LTE modem will help you stay connected so you can complete your online tasks. If that wasn’t enough to convince you, it comes with an integrated stylus when you need to take notes right on your display. The downsides: it’s heavy and the battery life isn’t great. 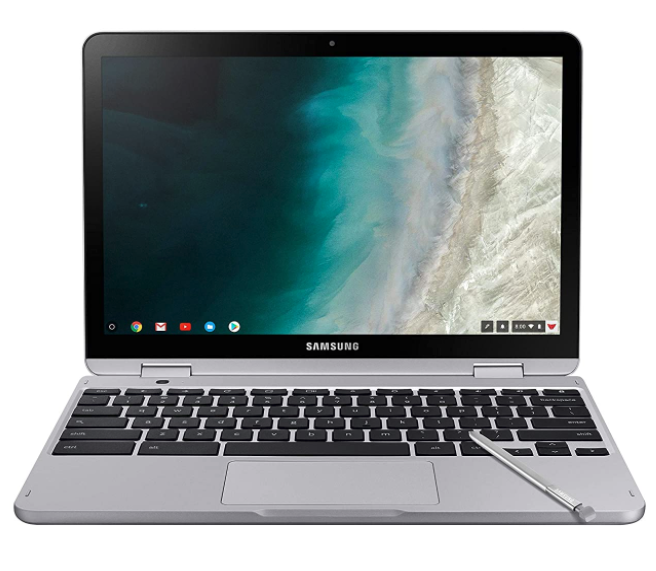 Courtesy of Amazon
Buy: Samsung Chromebook Plus V2 $452.84
buy it

Whether you’re looking to get your feet wet in the Chromebook world or just want a backup computer at home, the Lenovo S330 is a great entry-level option. A 14-inch display means that you won’t have to sacrifice screen space, while its great portability (it’s about an inch thick and weighs slightly over three pounds) means it’s a solid option to keep in your backpack on vacation in case you have to return an email. And at under $200, it’s a price that you won’t have to think twice about. 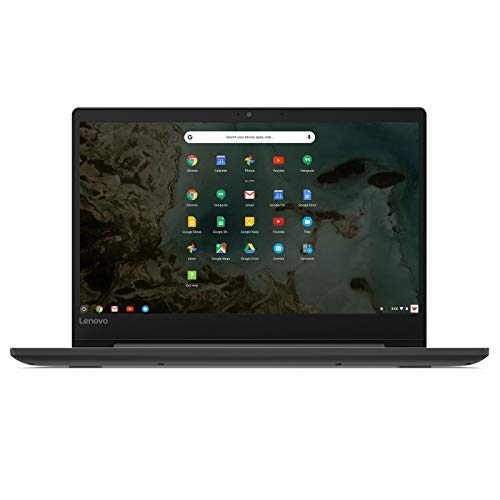 If you’re looking for a Chromebook that’s just an all-around good investment, the HP Chromebook 14 should be at the top of your list. A sturdy keyboard and trackpad are balanced by a clear and crispy display that makes it easy to use for prolonged periods of time. Additionally, at 3.74 pounds, it’s nice and light to carry in your bag at all times in case you need to work on a project. Plus, it has a number of ports (including HDMI!) which means you can stream shows into your HD TV if you so desire. 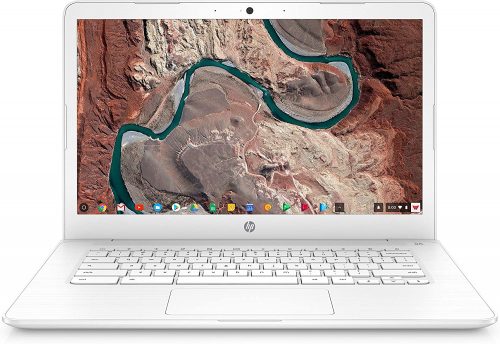 Aiming to merge the best of both worlds between your standard Chromebook and what you’d get from an Android device, the Google Pixel Slate is definitely one of the pricer options but allows for an unparalleled sense of flexibility. The keyboard can be removed, allowing you to use it in tablet mode or then reconnected when you need to really knock something out. Additionally, multitasking tools allow you to knock out a variety of projects at a given time. Essentially, the options to tailor it to your individualized needs are almost endless. 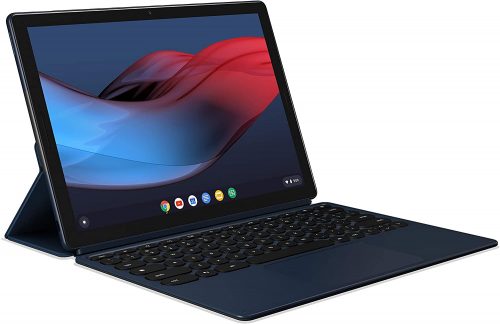 BEST FOR FAMILY USE

Whether its to watch Netflix, check Facebook or answer an email, Samsung’s Chromebook knows that there’s a chance you’ll be purchasing this device to keep around as a quick resource. This also means there’s a chance it might get caught in the line of fire if you happen to have kids or are struck with being a klutz. The durable exterior can take a bit of a beating and the keyboard is water-resistant if you should happen to knock over a cup of coffee or water or wine. Plus, with 11 hours of battery life, it’s got an energy level that will rival that of your children. 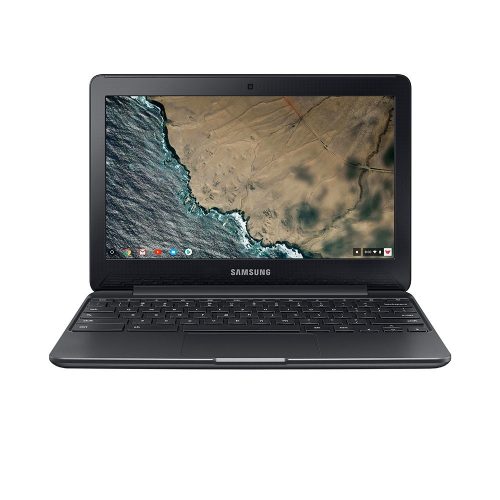 If you’re willing to invest a little bit more into a high-functioning, splurge purchase, the Lenovo Yoga is the way to go. With its 8th generation, Intel Core processors and 4K display (!) the Yoga has a powerful and jaw-droppingly gorgeous display that’s perfect for watching streaming shows. With its 10-hour battery life, you’ll have plenty of time to knock out old episodes of The Office before flipping over the keyboard to get work done. Yes, that’s right, the flippable hinge (ergo the Yoga in its name) allows you to go from tablet to laptop with ease. 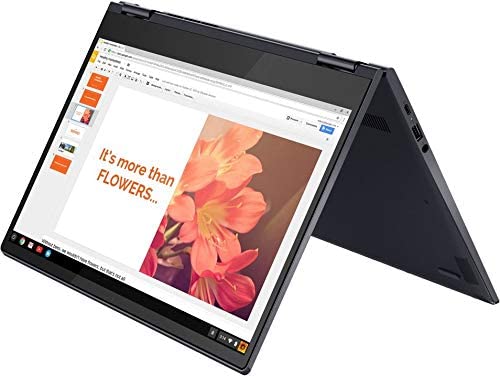 The Samsung Chromebook Pro is a great solution for the professional that’s always on the go and needs a device that can keep up. Capable of switching from standard laptop to tablet (with included stylus!) it has plenty of options for your style of work. The screen is a little smaller than standard Chromebooks but makes up for that with lightning processing speeds so you’ll be able to run multiple applications at once. 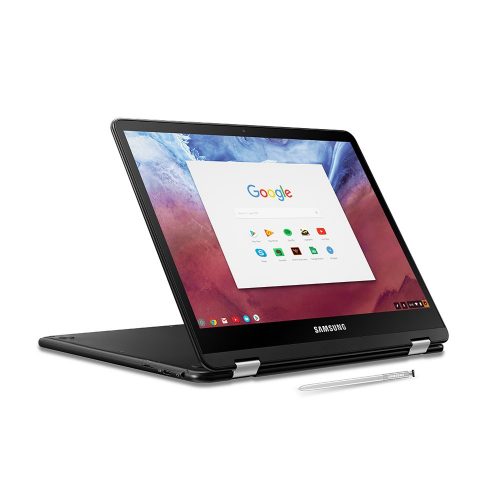 Lenovo’s C340 Chromebook comes in at just 11.6 inches — but don’t let its size fool you. Even while it’s on the smaller size, the full HD convertible screen means you can flip it over just like its more powerful Yoga cousin. Nice and thin and weighing only 2.65 pounds, it takes up almost no space and won’t weigh you down, so toss it in your bag if you need a second or third screen at work or just really prefer responding to emails during travel on a full-size keyboard. While its processor isn’t as good as other options on this list, it’ll still get the majority of tasks done, further solidifying itself as a handy back-up option. 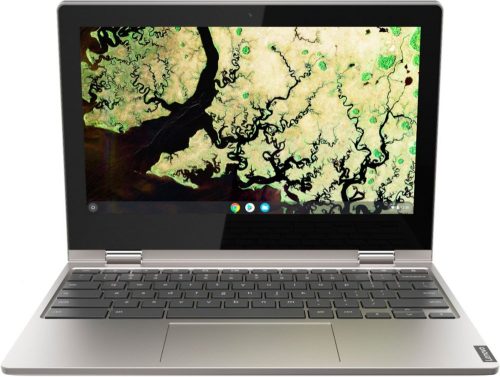