It’s rare to find an adult who doesn’t own a smartphone, but that doesn’t mean it’s time to get rid of your landline. Many homeowners and small business owners continue to use their landlines, which feature several benefits. In the case of an emergency, landlines are less likely to drop a call than a smartphone and are less likely to be out of batteries. If your smartphone is stolen, lost or damaged, a landline provides a means of communication until your phone is replaced. Landlines are also preferred by the elderly who may require phones with larger buttons, as well as small children who could be tempted to play games on a smartphone instead of chatting with grandma and grandpa. Small businesses also benefit from landlines by providing clients with one centralized number that won’t be affected by changes in staffing.

As for what type of phone to use with a landline, we recommend cordless phones. Often including built-in conveniences like paging systems, voicemail storage, caller ID, phonebooks, number blocking and more, cordless phones give users the ability to move freely through their home or office with their phone. In some cases, cordless phones can also be synced to work in conjunction with smartphones.

If you’re ready to cut the cord with your phone but not your landline, we recommend these cordless phones.

A phone and baby monitor in one, the PANASONIC DECT 6.0 Expandable Cordless Phone System is a versatile system that is ideal for home or office use. The talking caller ID announces the phone number that is calling, giving users the option to answer or ignore the call without getting out of their seats. Featuring noise reduction for a clear listening experience and voice paging that allows users to make announcements to every handset, the PANASONIC has an impressive call block that can block up to 250 numbers with the push of a button and can store 100 phone numbers in its internal phone book. The monitoring handset on the PANASONIC can be placed in a baby’s room and will send an alert to the base unit or stored cellphone number when it detects the sound of crying.

Pros: The PANASONIC is compatible with the hearing aid T Coil, making it an excellent option for the hearing impaired.

Cons: The PANASONIC is expandable up to six handsets but only comes with three handsets. 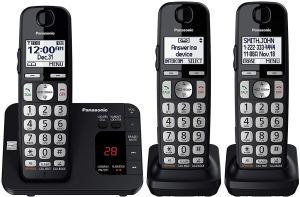 Expand to up to 12 handsets with the AT&T DECT 6.0 Expandable Cordless Phone, which comes with two handsets. The AT&T makes it easy to fully customize every audio aspect of the phone, including four preset sound profiles that allow for varying levels of bass and treble. There’s also a convenient silencer button that can be used to put the phone in quiet mode for various time intervals, a great feature for shift workers or families with napping children. We also like that the AT&T has a walkie talkie feature that can be used on up to four units at once, great for large homes or offices or for people with mobility issues. 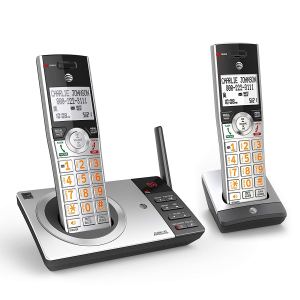 With presets that are programmable in English, French and Spanish, the VTech 2-Handset Expandable Cordless Phone has several features that make it a convenient phone for the home or office. Expandable up to five handsets, the phone includes a 50 name and number phonebook, nine speed dials, a 50 name and number caller ID history, last 10 number redial, and an intercom between the base unit and handset that’s perfect for making announcements.

Pros: The VTech can conference between an outside line and up to two cordless handsets, making it easy for multiple people to be on the same call at once in different rooms.

Cons: The Vtech comes with ten ringer options to choose from, but these can’t be customized to give pre-saved numbers their own distinct ring tone. 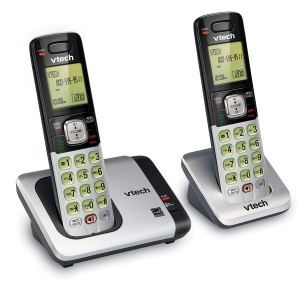 Have fun with your phones using the colorful VTech 4-Handset DECT 6.0 Cordless Phone, with the brightly colored set including a red, blue, green and silver phone that makes it easy to keep track of each handset. Featuring trilingual prompts (Spanish, English and French), a wall mount bracket, and a 50-name and number phonebook directory, the VTech DECT makes it easy to quickly call your stored numbers. We also like that the VTech DECT has an eco-mode that conserves power. Like the V-Tech, the V-Tech DECT also allows for a three-way conference call with an outside call and two system handsets.

Pros: The VTech DECT has a backlit keypad and display that makes it easy to see who is calling even in a dark room.

Cons: The VTech DECT comes with a built-in answering machine, but it only has 14 minutes of recording time compared to the PANASONIC’s 22 minutes. 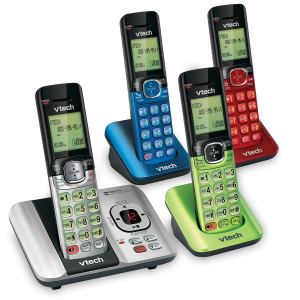 Bring your cellphone and landline together with the PANASONIC Bluetooth Corded / Cordless Phone System, which allows users to sync up to two smartphones via Bluetooth to the Corded / Cordless system, which means no more searching for your cell phone while at home (the phones can also be synced to the optional Key Detector which can find objects like key fobs up to 200 meters away). Like the first PANASONIC on our list, this phone also includes the baby monitor feature that sends alerts when crying is detected. Using wireless technology, the Corded / Cordless set boasts an impressive long range connection for the handsets while the corded phone features large buttons and a tilting LCD screen that is ideal for those with sight issues. Each phone also includes enhanced sound quality that helps to suppress background noise and the digital answering system includes 18 minutes of recorded talk time.

Pros: A fully charged cordless handset has 12 hours of talk time even when the power goes out.

Cons: The PANASONIC Bluetooth Corded / Cordless Phone System is one of the most expensive options on our list.

Featuring enlarged black font on the easy to read white LCD screen and enlarged font on the oversized, backlit keys, the AT&T DECT 6.0 Phone is ideal for users with vision limitations. Each handset clearly displays the name, number, time and date of incoming calls and the AT&T DECT 6.0 Phone can be expanded to five handsets. The phones feature an intercom function, nine number speed dial, an eco mode, wall mount bracket, an English/Spanish/French setup menu and a 50 name and number phonebook directory.

Pros: The AT&T DECT 6.0 Phone has an intuitive speakerphone that allows both people to speak and be heard at the same time, mimicking a conversation that is true to life.

Cons: The AT&T DECT 6.0 Phone features a flashing indicator to let users know when a voicemail is waiting, but the voicemail feature requires a subscription through a telephone service provider. 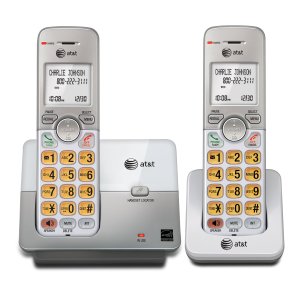 If you live alone or only need one phone to keep your landline active, we recommend the VTech DECT 6.0 Cordless Phone. The straightforward and affordable single handset cordless phone includes caller ID, call waiting, an easy to read backlit keypad and display, and a 30 name and number phone book.

Cons: No speakerphone option is included. 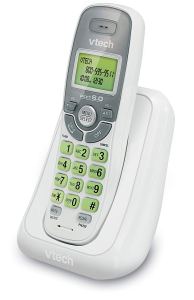