As the cameras in smartphones continue improving, the benefits for using a DSLR must continue to evolve to justify lugging around an extra piece of equipment on trips, around the house, and to events. Thankfully, they are. In our search for the best DSLR cameras on the market, we’ve picked three options that not only easily outrank the quality of images and videos that can be captured with a phone, in some cases they can also connect directly to your smartphone for easy uploading to social media and editing apps. It turns out, you can have your cake and eat it too. Then you can take a stunning picture of it.

Smartphone cameras are great for capturing images and videos on the fly, but when it comes to the quality of the content, the DSLR cameras we’ve included below far outrank their smartphone competitors. Smartphones often can’t handle shooting low light, resulting in grainy and blotchy footage or pictures. Fast moving events, from a football game to your baby quickly crawling across the living room, often turn out fuzzy on a smartphone, with the camera unable to keep up with your target. DSLRs have much faster processors and apertures that allow them to capture high speeds, meaning your toddler will look just as cute in your picture of them running for the first time as they do in real life.

Add Comment
1 Person Commenting
Steve Brudney
3 years
I never have grown fond of the menus in DSLR's. I have a Nikon D5000, sometimes called...

Smartphones are continually being built with increasing memory sizes, but that memory must be shared with music, apps, emails, and texts, leaving a small amount of space for video and photo storage. Two of the DSLR cameras we’ve included below can upload content immediately through WiFi, either onto a laptop or in a cloud service. All three cameras can use SD memory cards for additional storage, which means you can keep shooting and filming without ever running out of space.

Add Comment
1 Person Commenting
Steve Brudney
3 years
I never have grown fond of the menus in DSLR’s. I have a Nikon D5000, sometimes called…

If you’re ready to take your photos and videos to the next level and want to capture your most precious moments, regardless of the speed or lighting circumstances, you need a DSLR. Here are three that we love.

Get everything you need to take professional quality photos and videos with the Canon EOS Rebel T6 Digital SLR Camera, which comes with two lenses, a 16 and 32GB memory card, a tripod, remote switch and more.

Cons: The Canon EOS Rebel T6 Digital SLR Camera has three aperture settings (F4.5, F5, and F5.6), and some customers wish there were a more significant range. Other’s note that they want to the camera could be used while charging instead of having to remove the battery and wait for it to charge outside of the camera. 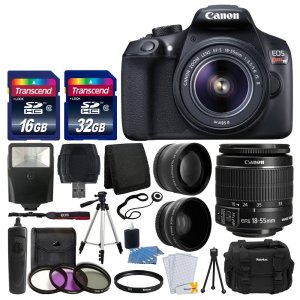 Shoot with clarity in low light and fast action settings with the Nikon D3400 DSLR Camera, which is lightweight, user-friendly, and can work in tandem with your smartphone.

Pros: The Nikon D3400 DSLR Camera can pair with up to five smart devices, easily connecting you to your phone, laptop, tablet, TV and more to allow for quick transfer of files for editing or sharing. The camera comes with a free membership to the Nikon Image Space account, which automatically backs up every photo and video as soon as its shot. Record in full HD1080P video and create time-lapse videos, slow-motion videos, and more. An autofocus button takes crisp pictures of fast action, with autofocus able to handle any type of movement and lighting. The Nikon has a more extensive aperture range than the Canon EOS Rebel with F3.5 to 5.6. It can shoot RAW, has image stabilization and Native ISO 100-25600 with 5 fps shooting and sound recording.

Cons: The Nikon doesn’t include all the accessories that come with the Canon Rebel, including a camera bag and tripod, but it can be purchased as a bundle for a higher price point. It also does not come with an SD card, although images can automatically be saved to the Nikon Image Space account. 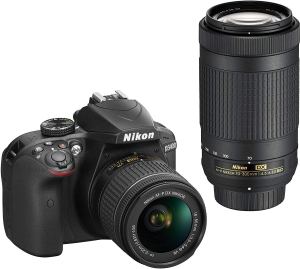 Pros: The Canon Rebel XSi DSLR Camera has a sensitive enough sensor that images can be blown up to poster size with crisp and clear quality. The camera has Canon’s EF-S 18-55mm, a zoom lens and DIGIC III image processor for fast photo processing. Like the Nikon, the Canon Rebel XSi DSLR Camera has an aperture range of F3.5 to 5.6. The Canon has improved the Autofocus and framing rate and comes with software that includes Dust Delete Data Detection.

Cons: Images must be stored on an SD card, which is not included with the camera purchase. Videos can’t be shot on the Canon Rebel XSi DSLR Camera. 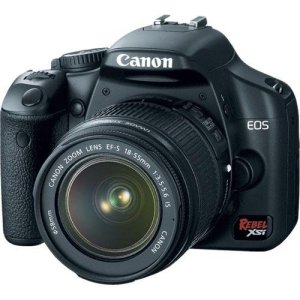