Pre-built gaming PCs are popular because you can get top-of-the-line components for a great deal and without the hassle of needing to put the rig together yourself. And with the chip shortage, a pre-built gaming PC is one of the few guaranteed ways to get your hands on an RTX 3000 Series or Radeon RX 6000 series graphics card without having to cave and buy from a scalper at a ridiculously inflated price.

And whether you’re new to PC gaming or a veteran, there are a few points to keep in mind when shopping for a new gaming PC:

We’ve rounded up 13 of the best gaming PCs you can buy and have broken down their features and price points to help you choose the best one for your needs. We looked at brands like Acer, Dell, HP, and Alienware to give you a variety of build types and price points to help shoppers with all kinds of budgets and playstyles. You can keep reading below to find your next gaming PC.

This PC by Alienware is highly customizable, letting you future-proof your setup with ultra-high-end components like an AMD Ryzen 7 or 9 processor, Nvidia GeForce RTX 3090 or AMD Radeon RX 6900 XT graphics card, up to 128GB of RAM, and dual 2TB drives. You can also opt for a liquid cooling option to keep all of your shiny new components running at optimal temperatures. The clear glass side panel lets you peek into the inner workings and show off your build, and the rounded, angled tower gives a different spin on the traditional tower design. 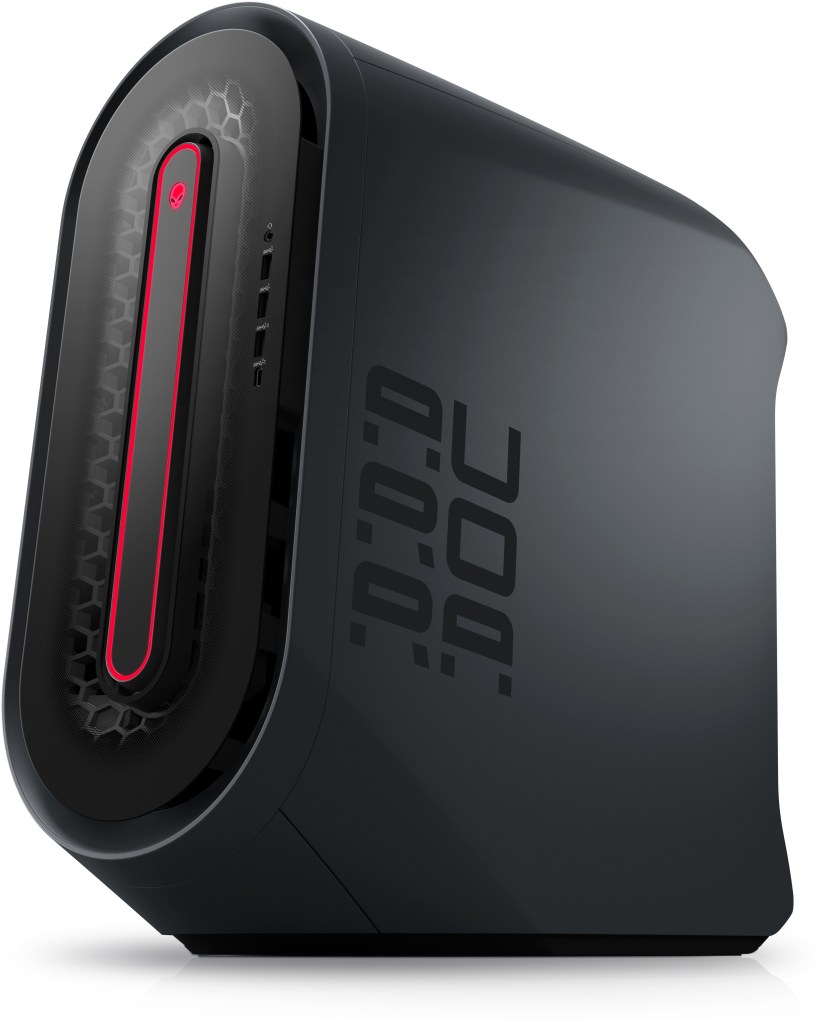 Getting your hands on a decent gaming build doesn’t mean you have to empty your bank account. The HP Pavilion gaming desktop is designed for casual gamers, but it still has powerful enough components to handle popular titles. It’s powered by an AMD Ryzen 5 CPU, GeForce GTX 1650 Super graphics card, up to 32GB of RAM, and up to a 1TB SSD.

The base configuration retails for just over $600, and even if you choose better components, you’ll still be able to get an excellent gaming build for under $1000; which is perfect for anyone just starting out with PC gaming or anyone who isn’t interested in playing super graphically taxing games. 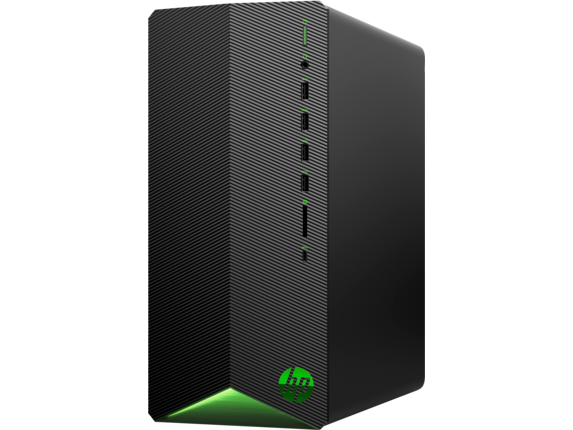 The Dell Inspiron G5 5000 is a great mid-tier gaming PC, one of the few guaranteed ways to get your hands on the new Nvidia GeForce RTX 3060 GPU. It’s powered by an Intel Core i7-10700F CPU that the user can overclock to 4.8GHz, 16GB of RAM, and a 1TB SSD. There are three additional drive bays plus an M.2 slot, so you can upgrade storage to fit your needs later.

It features Wi-Fi6 and Bluetooth 5.1 connectivity for blazing-fast wireless internet speeds and more reliable connections to wireless peripherals like mice and headsets. You can also connect your PC to Alexa-enabled devices for hands-free voice controls. 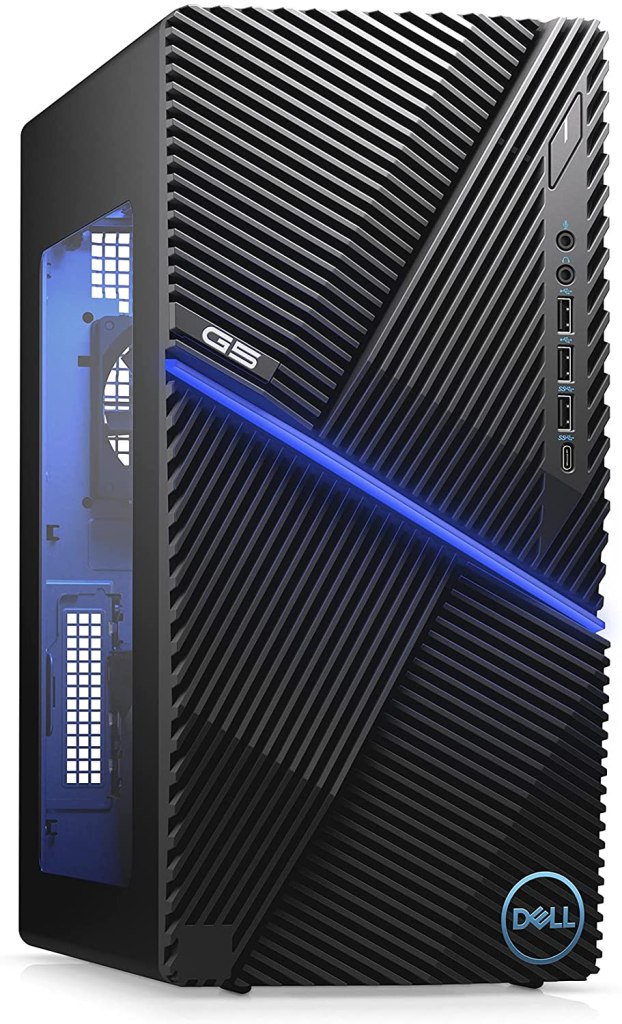 If money is no object, the Corsair One Pro a200 is one of the absolute best (and most expensive) gaming PCs you can buy. It’s powered by an AMD Ryzen 9 5950X CPU, 64GB of RAM, a GeForce RTX 3080 GPU, a 2TB M.2 SSD, and a 2TB HDD. The incredibly compact tower has a footprint small enough to tuck away on your desk or under a table, and an advanced liquid cooling system protects all of those fancy components from overheating.

The tower’s connectivity is next-level as well: you’ll get 5 USB 3.2 ports, a USB-C connection, 3 DisplayPort inputs, an HDMI port, and 7.1CH audio inputs. You’ll also get 2 USB 3.2 ports and a USB-C input on the front of the tower, giving you plenty of ways to connect external storage, monitors, and peripherals. And if you prefer wireless peripherals, Bluetooth 5.0 gives you a stable, high-speed connection. And with Wi-Fi 6, the ultra-fast wireless internet speeds will provide you with the extra edge you need in online games.

If your gaming rig has more powerful components, it can run hot, which means you need to take extra steps to keep your PC from overheating and damaging delicate circuitry. The Thermaltake Shadow 360i features an open-air chassis design, allowing tons of airflow. It also has a closed-loop liquid cooling system with a 360mm radiator and three 120mm fans matched for optimal performance. Combined, these systems ensure that the Ryzen 5 CPU and RTX 3060 Ti graphics card run at optimal temperatures for a smoother, safer gaming experience. 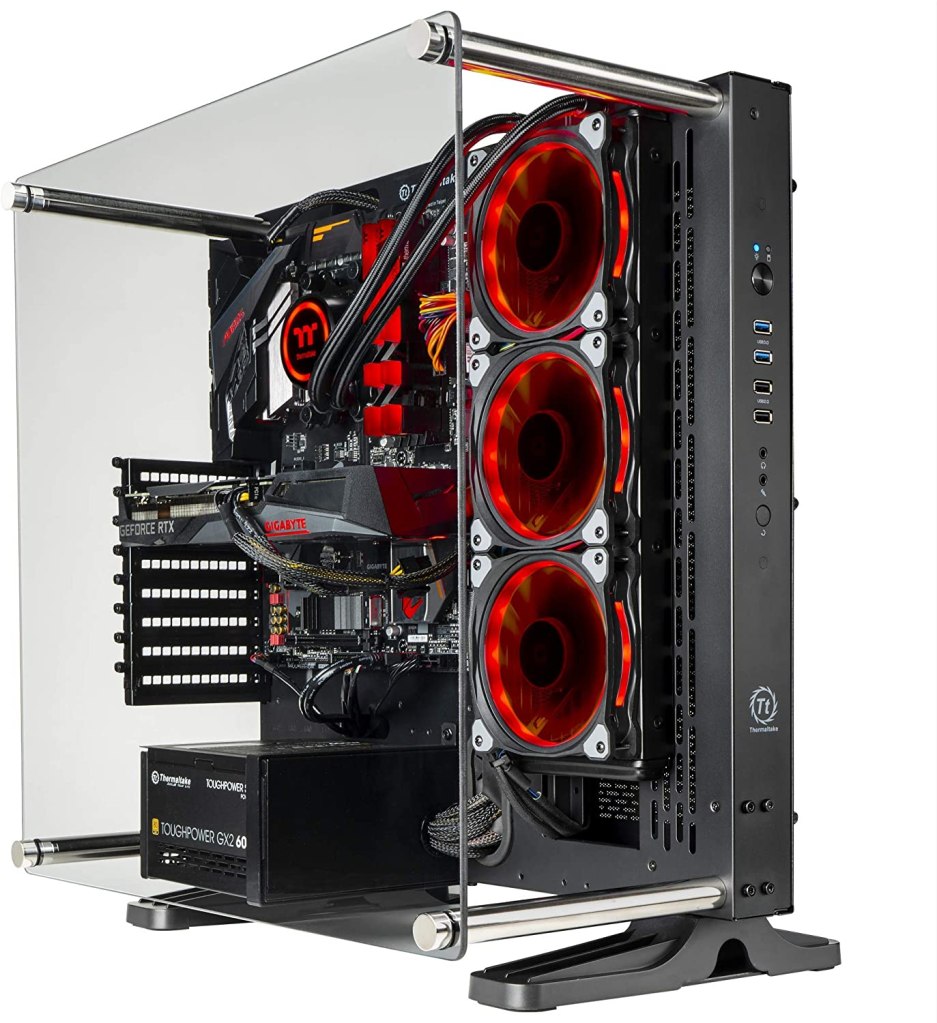 Fans of Intel-based PC builds will love the Aegis R. It’s built around a 10th generation Intel Core i9-10900KF CPU with a base speed of 3.8GHz and can be overclocked to 5.3GHz. It also has 32GB of RAM, a 512GB SSD, and a 2TB HDD, all of which are user-upgradeable, so you can swap out components later if your needs change. The GeForce RTX 3060 GPU lets you take on even the most graphically demanding games, and the included keyboard and mouse are a nice bonus. 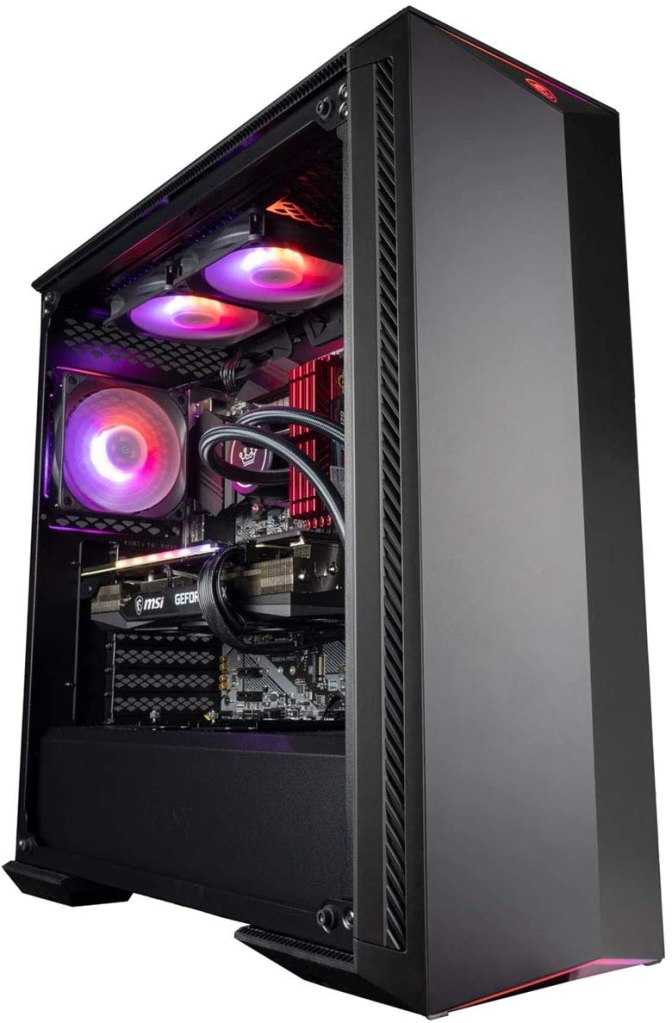 Customers who prefer AMD-based builds should opt for the HP OMEN 30L desktop. This PC is built with a Ryzen 5 5000G CPU with a base speed of 3.9GHz and can be overclocked to 4.4GHz. It comes with 16GB of RAM and a 1TB SSD which are user-upgradeable, and with 3 M.2 slots and two 3.5-inch bays, there is plenty of room for upgrades later on. The GeForce RTX 3060 graphics card lets you play the hottest triple-A titles, while DTS:X audio and 5.1CH surround sound output create a more immersive experience. 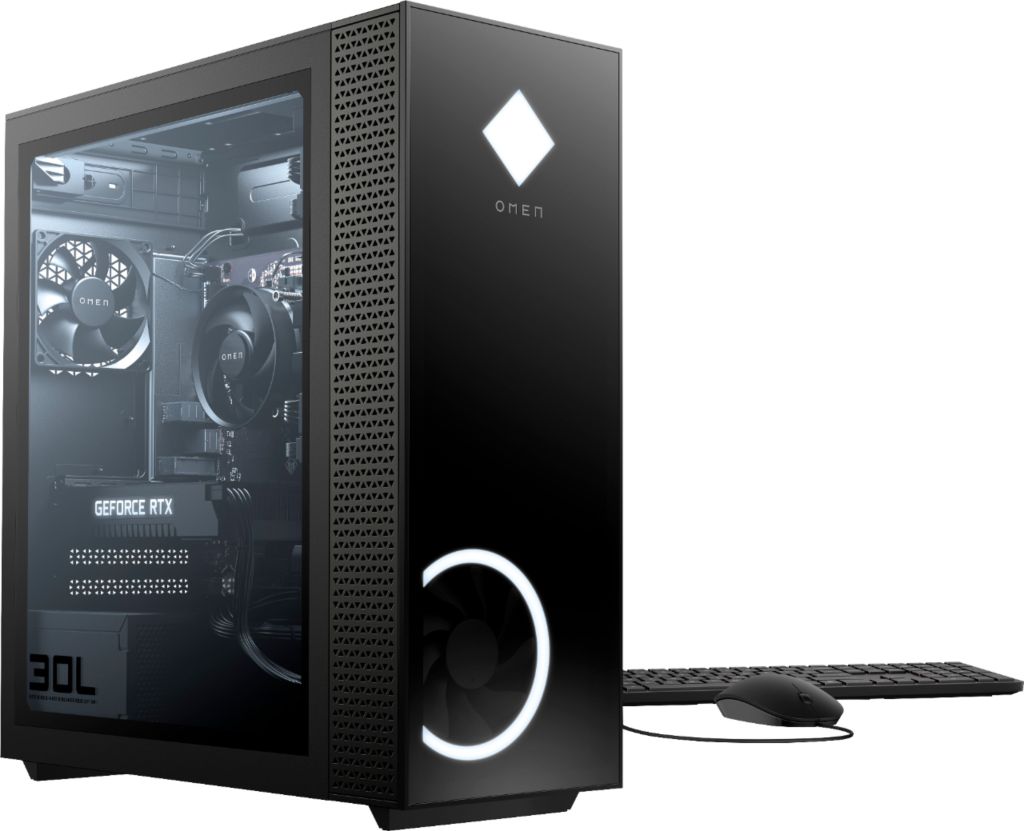 Mini PC builds have become popular, as they allow you to pack tons of high-performance components into a smaller footprint. The MSI MPG Trident 3 weighs in at just under 7 pounds and measures 9.1 x 13.6 inches, making it small and lightweight enough to slip into a backpack if you need to take it with you. The included stand also gives you more placement options for horizontal and vertical orientations. An Intel Core i7-10700F CPU powers it, 16 GB of RAM that you can upgrade to 64GB later, a GeForce RTX 2060 graphics card, 512GB M.2 SSD, and a 1TB HDD. 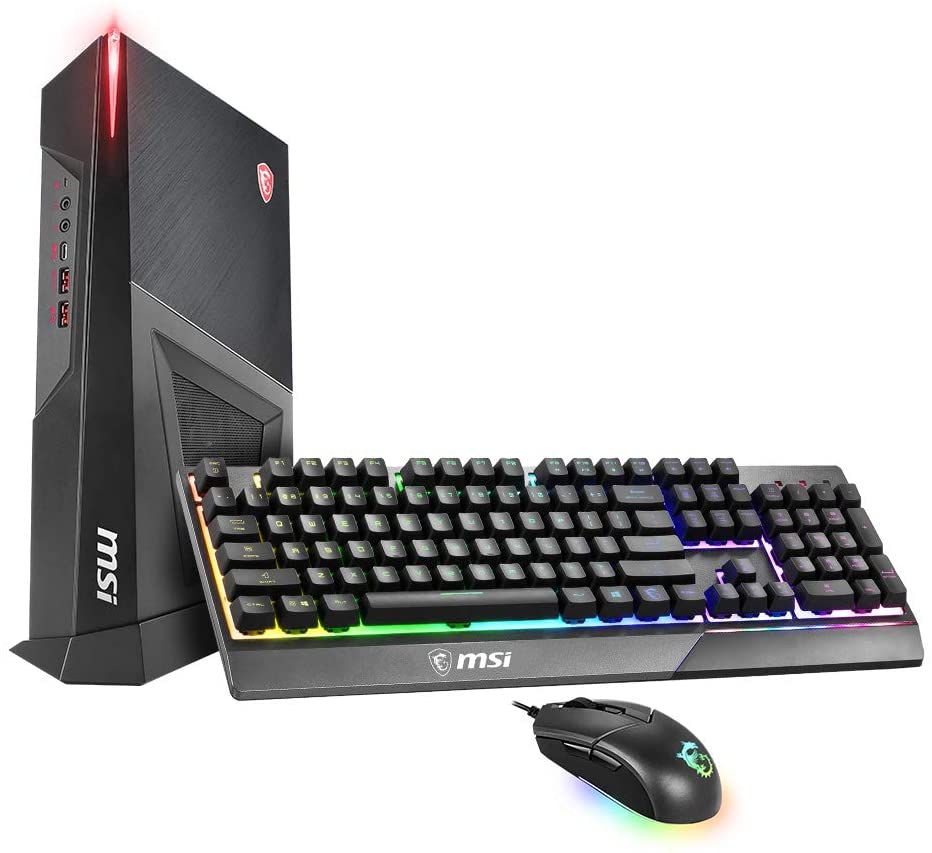 BEST FOR WORK AND PLAY

If your gaming space doubles as a home office, you don’t necessarily want a PC loaded down with RGB lighting and other gaming-specific hardware. Fortunately, Dell’s XPS 8940 Special Edition is designed to transition seamlessly from work to play. The tower case features practical aesthetics that wouldn’t be out of place in a traditional office, but it hides some seriously powerful hardware. It’s powered by an Intel Core i9-11900K CPU, up to 128GB of RAM, a GeForce RTX 3070 graphics card, a 2TB M.2 SSD, and a 2TB HDD.

This means you can do everything from music and 8K video editing to 3D rendering during the day, and then boot up your favorite triple-A games in the evening to unwind after hours of virtual meetings. If you share your workspace, the cooling fans are designed for quiet operation, so you won’t have to worry about bothering office mates. And with 10 USB ports, you won’t have to worry about how you’re going to connect all of your peripherals.

As games get larger, you need more and more space for your library. The Gamer Supreme from CyberPowerPC lets you configure a rig with a 1TB M.2 SSD and up to a 4TB HDD; this means that even if your favorite games run in the hundreds of gigabytes for downloads, you’ll still have tons of space for photos, music, and documents.

And with the SSD as your boot drive, you’ll get faster start-up times. It’s powered by an AMD Ryzen 7 CPU, up to 64GB of RAM, and a Radeon RX 6700 XT graphics card; this makes the PC both VR-ready and able to run games with native 4 K resolution effortlessly. You’ll also get 7.1CH surround sound audio for a more immersive gaming experience. 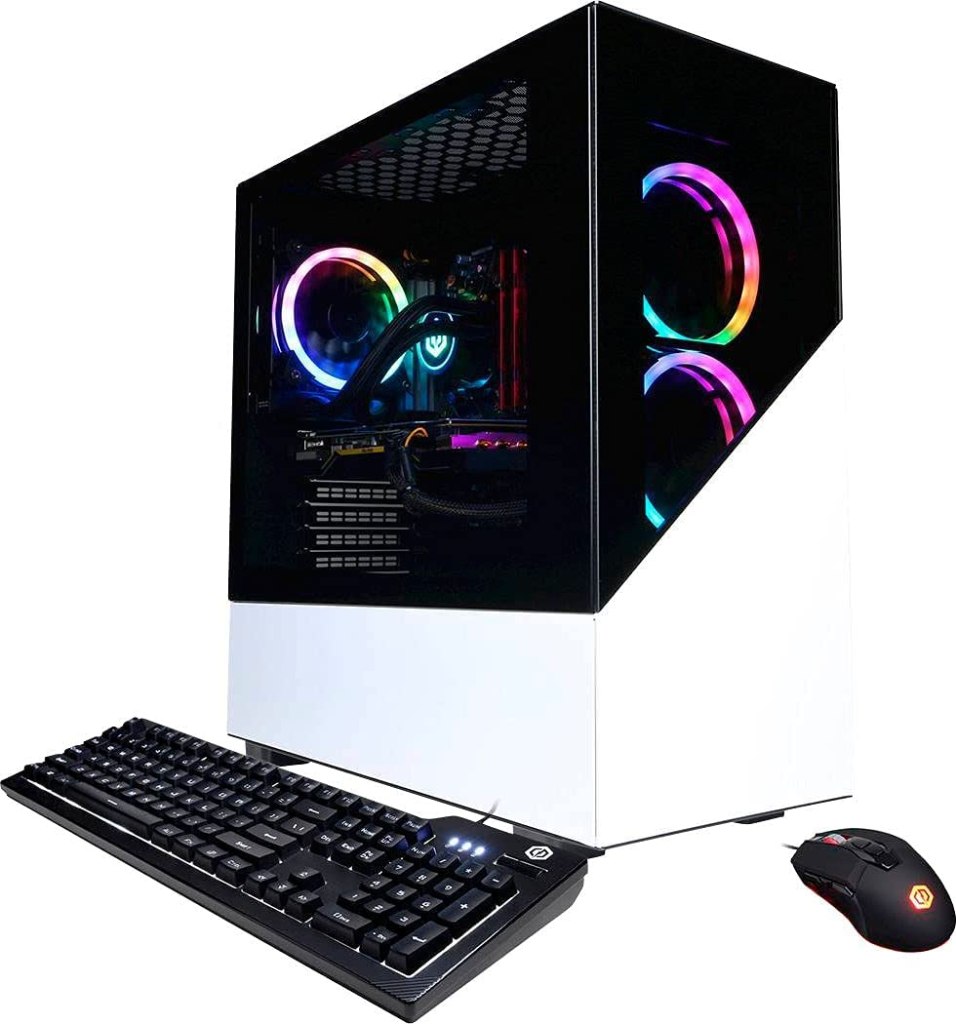 Content creators need a gaming PC that can not only handle the hottest triple-A games but also simultaneously run streaming software and editing programs. The Acer Predator Orion 3000 is designed from the ground up to be the ultimate streaming machine. It’s powered by an 11th generation Intel Core i7-11700F CPU, GeForce RTX 3060 Ti graphics card, up to 64GB of RAM, and a 1TB SSD that can be user upgraded. This configuration supports both gigabit Ethernet and Wi-Fi 6 connectivity for blazing-fast and ultra-reliable internet speeds, which are crucial for live streaming and uploading large video files.

DTS:X Ultra audio processing gives you crisp, rich sound for editing highlight reels and channel trailers, and Predator Sense lets you monitor CPU temperature, frame rates, and input lag on the fly so you can catch issues before they can ruin your stream. It even has a built-in headset cradle to keep all of your peripherals in one place so you can spend more time interacting with chat while taking down bosses and less time hunting for your headphones. 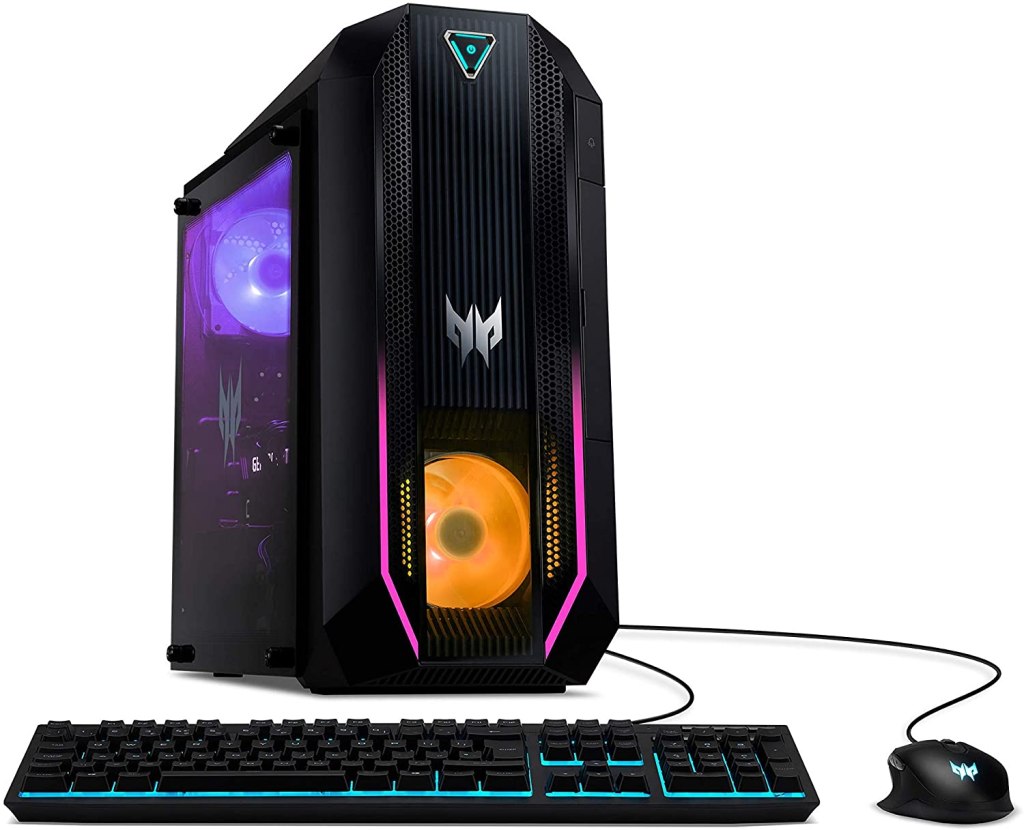 While components are the most important part of any PC, you still want your gaming rig to look cool. The Origin Millennium 5000X Signature Series lets you choose from 5 different designs for the 4-panel tempered glass case. The case also lets you see through to the iCUE-powered RGB lighting and components inside. This model is also incredibly customizable, allowing you to mix and match CPUs, GPUs, and storage drives to suit your current and future gaming needs; you can get up to a staggering 16TB of SSD storage space and 128GB of RAM, but you’ll have to be willing to shell out a ton of cash.

The base configuration starts around $2,500, and the higher-end builds can easily run you closer to $10,000, depending on what you choose. If you want to swap out components yourself, there are 4 SSD bays, 2-3.5-inch drive bays, 4 RAM slots, and plenty of PCIe slots for you to drop in components later (and not have to sell your car or house to do so). 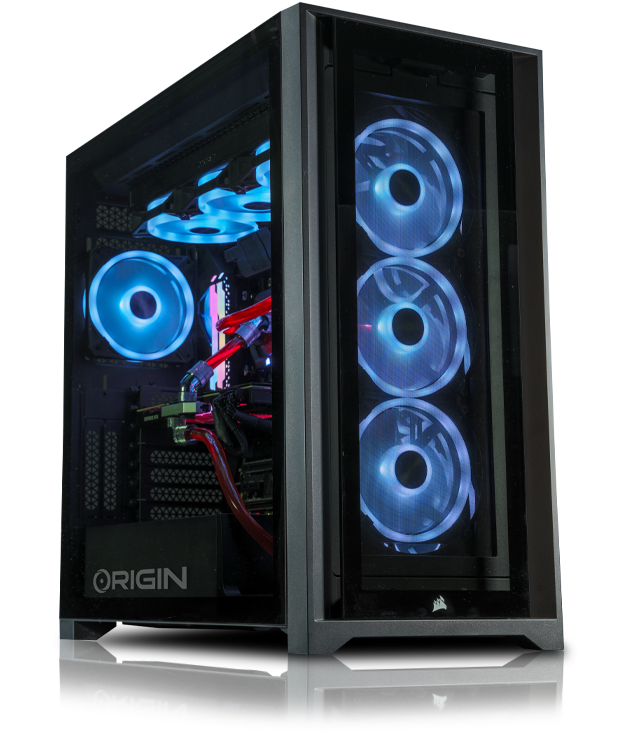 If you prefer a laptop for gaming, the Razer Blade Pro 17 is the best on the market. The super narrow bezel allows this laptop to fit a 17-inch screen into a 15.6-inch body; you can choose a 1080p, 1440p, or 4K touch display to suit your playstyle and creative needs. The aluminum chassis is CNC machined for precision and durability while also being easy to open for user upgrades.

You can configure the laptop with an RTX 3060, 3070, or 3080 graphics card, up to a 1TB SSD, and 16GB of RAM. An Intel Core i7-11800H CPU powers it for all of the processing speed and power you need for the latest triple-A titles. Vapor chamber cooling gives you the best of both fan and liquid cooling to keep your laptop running at optimal temperatures, and USB-C charging lets you top up your battery fast. 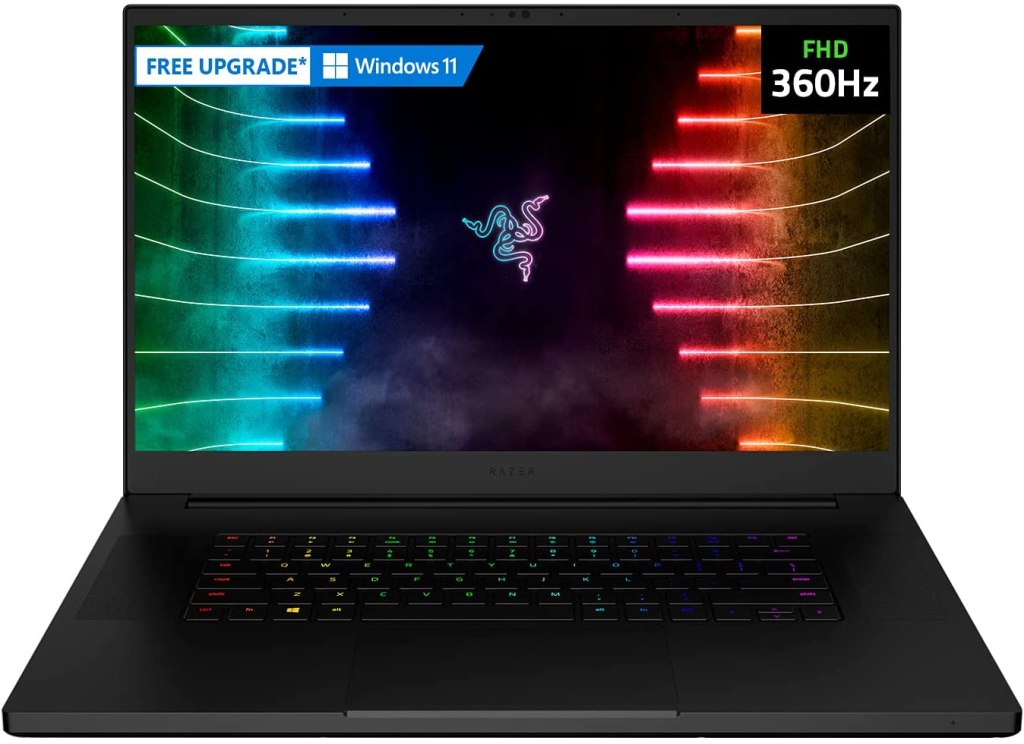