From professional laboratories to science classes, having the right tools can make all the difference when it comes to experiments, both big and small. That’s why when it’s time to look for new lab equipment, picking a microcentrifuge that is easy to use and safe can mean faster and more precise results.

A microcentrifuge spins small samples of liquid at rapid rates. Liquids react to gravity and often separate, with the dense part going to the bottom and the less dense fragments floating to the top. Centrifuges spin the liquid at an extremely high g-force, creating a uniform density throughout the fluid. Centrifuges are also used to ensure nothing is left at the bottom of a tube.

The Oxford C8 Centrifuge goes by many names, including microcentrifuge, minicentrifuge and lab microcentrifuge, but the important thing to note is that it’s compact, reliable and sturdy. The Oxford C8 is designed for microfilter cell separations and HPLC samples and comes with an eight-position rotator for 1.5 ml or 2 ml tubes and eight 0.2Ml PCR tubes. The Oxford C8 has a fixed speed of 6,000 rpm (2000 x g) and has a noise level of less than 55 dB, making it a quiet machine that you can use all day. Safe to operate as well, the Oxford C8 has an automatic brake that stops all spinning action as soon as the lid is opened.

Pros: The Oxford C8 comes with adapters to accommodate all major microtube and PCR tubes and strips.

Cons: The Oxford C8 is operated by a 120 Volt plug and must be used near an outlet. 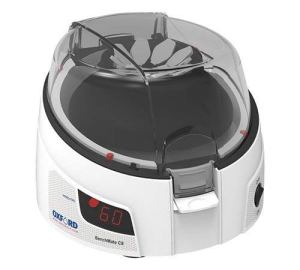 For a microcentrifuge that is appropriate for use with blood samples, try the AMTAST 10,000 RPM Mini Centrifuge. The AMTAST is suitable for 2 ml, 1.5 ml, 0.5 ml and 0.2 ml tubes and can fit an eight PCR tube rank. The AMTAST is easy to use, even boasting a 95-degree bounce that makes it possible to use the machine with one hand. The clear LED screen makes it easy for users to read the rolling speed and time with the AMSTAT.

Pros: The AMTAST has a large eight-hole radius rotor with a centrifugal force that is 1.5 times greater than a typical six-hole rotor that uses the same rolling speed.

Cons: The AMSTAT has a larger footprint than the Oxford C8. 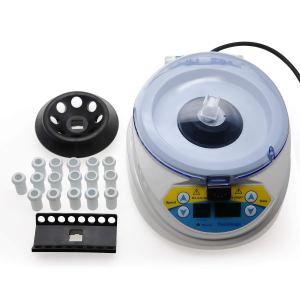 For a machine that is quiet and maintenance-free, try the HWLAB Multi-Speed Desktop Mini Centrifuge. The durable HWLAB comes with a one-year warranty and weighs just over 3 pounds, making it ideal for moving between workstations or labs. Users have the option to choose between the circular rotor, which can hold up to six 1.5ml or 2ml tubes, or the strip rotor, which has enough space for 16 0.2ml tubes. The HWLAB comes with six 0.5ml tube adapters and six 0.2ml tube adapters.

Pros: The HWLAB gives users the options of 12 speeds ranging from 1,000 rpm to 12,000 rpm, making it one of the fastest machines on our list (it has a maximum centrifugal force of 6,900 x g). Users can easily select the speed and see it displayed on the small LCD screen.

Cons: The HWLAB can only fit six tubes at once in its circular rotor, compared to the Oxford C8 and AMTAST, which can test eight tubes at once. 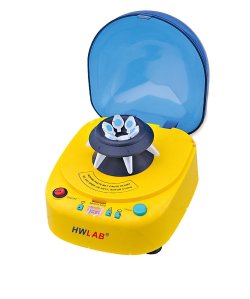 For a powerful and nearly silent machine, we recommend the Scilogex Personal Micro-Centrifuge. The Scilogex has a massive 15,000 rpm max speed and can be customized by 100 rpm increments all the way down to 200 rpm, with the fine speed controlled by triggers. The LCD screen clearly states the Scilogex’s speed and allows users to set the timer between 30 seconds to 99 minutes, while also offering continuous operation. The Scilogex comes with a massive 12 place rotor that can fit 2ml, 0.2ml and 0.5ml tubes. The machine has an automatic door lock for added safety and features a brushless motor drive that is maintenance-free. Users can feel comfortable purchasing the Scilogex, which has a two-year warranty.

Pros: The Scilogex has over-speed protection that protects the specimens being tested.

Cons: The Scilogex has the biggest price tag on our list and at 15 lbs is also one of the most massive units. 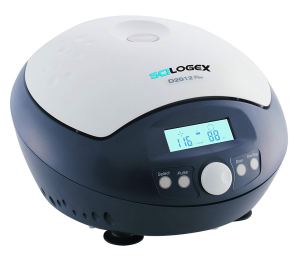 A great option for students is the Four E’s Scientific Mini Centrifuge. The affordable mini centrifuge still boasts an impressive 5,400 RPM max spin speed and throws off minimal sound (less than 50 dB, making it quieter than the Oxford C8 Centrifuge). The Four E comes with two interchangeable rotors, including a circular six-slot rotor for 0.2ml, 0.5ml, 1.5ml and 2ml tube capacity and a strip rotor with six spots for 0.2ml tubes. The Four E is dynamically balanced, which means the machine will provide a stable running routine even if the rotor becomes unbalanced.

Pros: The Four E is easy and safe to use, with the enclosed design reducing the risk of liquids spilling. What’s more, the click-on design makes it easy for users to swap the rotors without using tools. It also boasts a door-open braking system that will stop the rotors from spinning if the door is opened.

Cons: The Four E is not appropriate for blood samples. It also doesn’t allow for various speed settings. 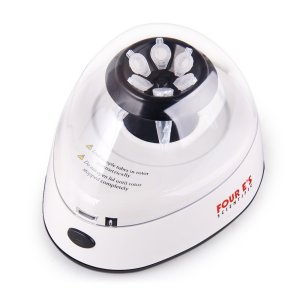 Small but mighty, the Tomy Multi Spin Mini Centrifuge can work in just about any lab. An excellent option for travel, the Tomy comes with five plug-in adapters for global use. The Tomy has a max rpm of 6,000 and comes with rotors for eight PCR tubes (1.5ml and 2mL Eppendorf-style) and two PCR strips (0.2ml x 8). The Tomy is built with safety in mind, with the machine featuring a lid-opening interlocking break, an overcurrent fuse, and an over-current detector.

Pros: The Tomy is the best option for field use on our list. It’s the only centrifuge that can be used cordless (it comes with adapters or can be powered by four AA batteries) and at only 2.8 pounds, the Tomy is also one of the lightest units.

Cons: Batteries for the Tomy are not included. The Tomy does include a timer function, but at six minutes, it’s significantly shorter than the Scilogex. 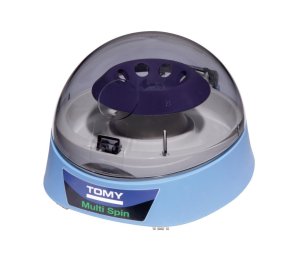 For an excellent all-around unit, we recommend the Microyn Digital Bench-top Centrifuge. The Microyn features an easy to read LCD screen that can switch between rpm and rcf. The machine can fit up to six 15ml tubes and the speed can be set between 100 and 5,000 rpm. The Microyn has safety features like a lid lock that ensures the unit remains closed until spinning has stopped, as well as an automatic release that helps to cut down on processing time. Like the Scilogex, the Microyn has an extended timer that can be set between 10 seconds and 99 minutes.

Pros: The Microyn features a short spin button that makes it easy for users to initiate quick spins.

Cons: At 5,000 RPM, the Microyn is not one of the fastest machines on our list. It is the most cumbersome machine on our list, weighing over 16 pounds. 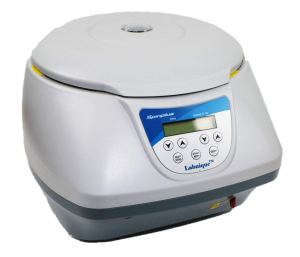