Zoomers may not realize this, but there was a time before camera phones existed; when photos were taken on actual cameras, with actual film, that needed to be developed and printed. (Ok, boomer!) The problem is that those photos are slowly degrading as they get older, and are in danger of being lost to Father Time. But it doesn’t have to be that way, and this is where the best photo scanners come in.

Equipped with specialized sensors to faithfully digitize those priceless photo prints, the best photo scanners will help you keep those treasured memories around forever. The best photo scanners can even enhance old and damaged photos, making them look as great as the day they were first developed. On top of that, some of the products below can even scan film negatives and photo slides, restoring your family’s treasured photo albums for the 21st century.

Even though many film purists are mourning the loss of old-school photography, we’re actually living in a golden age for the casual photographer. After you’ve scanned and restored your old family pictures and photo slides, you can print them out with a portable phone photo printer or send them to be framed with an online photo framing service. First, you need to find the right photo scanner for your needs — and that’s definitely something we can help with.

What To Look For in the Best Photo Scanners

The right scanner for you should mostly be determined by your needs. Do you have a shoebox full of 4 x 6 photos you want scanned before they deteriorate? Or do you have a handful of larger 8 x 10 photos you’d like to preserve, but by doing so delicately?

For those looking for speed because you have a million photos you’d like to scan with minimum hassle, look for something with an automatic feeder — although they are generally not recommended for more delicate photos.

Although they require a bit more manual labor, flatbed scanners are often preferred in the photo scanning world. You generally get the most accurate scans and you can preserve your original photos.  Plus you can scan a wide variety of sizes, something most auto-feed scanners aren’t able to do.

But if you have a lot of film you would like to be digitized, you should consider getting a film scanner. These generally only cost around $100 – $200.

Resolution is another item you should consider before deciding on the right photo scanner. Generally, anything over 300 dpi is a good cover-all baseline. For higher quality scans, you’ll want a scanner that can achieve 1200 dpi or higher.

What Are The Best Photo Scanners Available?

There isn’t a ton of diversity in the photo-scanning world as the genre is dominated mostly by Epson and Canon, although there are a few outliers like Kodak and ClearClick that make a quality scanner. Regardless of brand, it’s most important to pick a photo scanner for your specific needs.

Don’t lose your favorite memories to wear and tear and time! Digitize those never-forgotten photos with one of our picks for the best photo scanners.

Have you been ignoring that big stack of photos you’ve been meaning to digitize because you don’t want to painstakingly scan each photo one by one? The Epson Fastfoto FF-680W is your solution. This wireless photo scanner takes large stacks of photos and quickly digitizes them at a rate of one print per second at 300dpi and one every three seconds at 600dpi. This small, printer-like scanner also comes with FastFoto, a program to save, edit and enhance your newly digitized photos. In a speed test conducted by PCMag, the Epson was able to scan, digitize and save a stack of 36 photos in just under two minutes. That’s much faster than any other photo scanner in the group. And that’s not all it can do — it scans documents, too. You can finally digitize that stack of photos you’ve been ignoring without it being an all-day project. 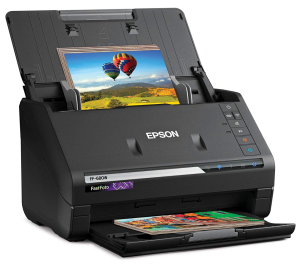 The Epson Perfection V600 photo scanner has a high optical scan resolution of 6400dpi to produce quality digitized representations of your photos. And with Digital ICE technology, it can even clean up older photos by removing dust and scratches. The V600 also has convenient holders to help you scan photo negatives and even old photo slides as well. It doesn’t have any auto-feed features like our top overall pick, so scanning a ton of pictures by hand will be a bit more of a task. If you only have a handful of photos that need digitization from time to time, it’s hard to beat this photo scanner, especially at this price point. 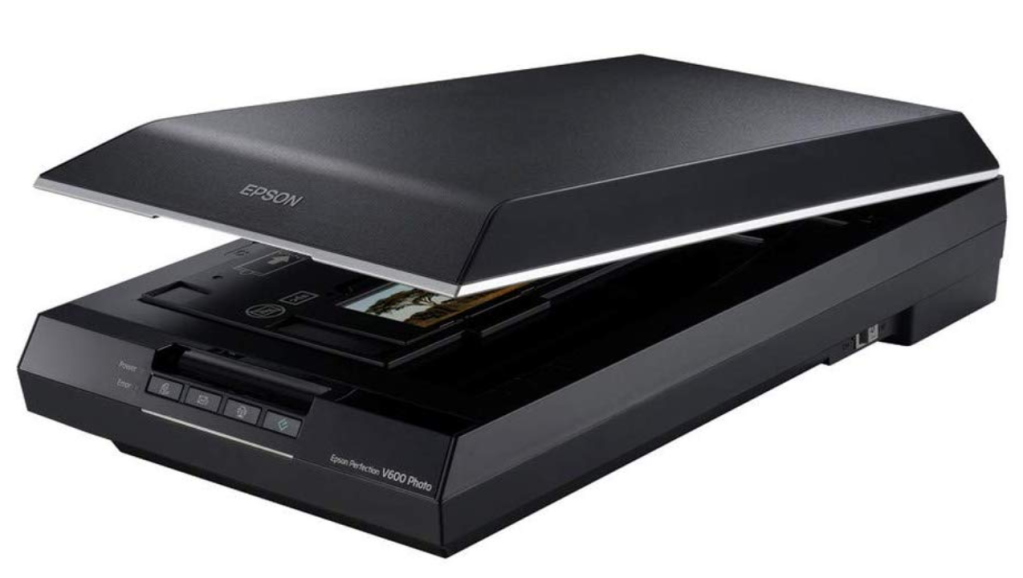 Although it doesn’t have the resolution of its V860 or V600 counterparts, the Perfection V39 still sports an impressive 4800dpi optical resolution and is significantly cheaper. Using the software you can make minor restorations and adjustments. You can even scan your photos straight to Google Drive or other cloud services. This is an affordable way to get a high-quality Epson photo scanner. 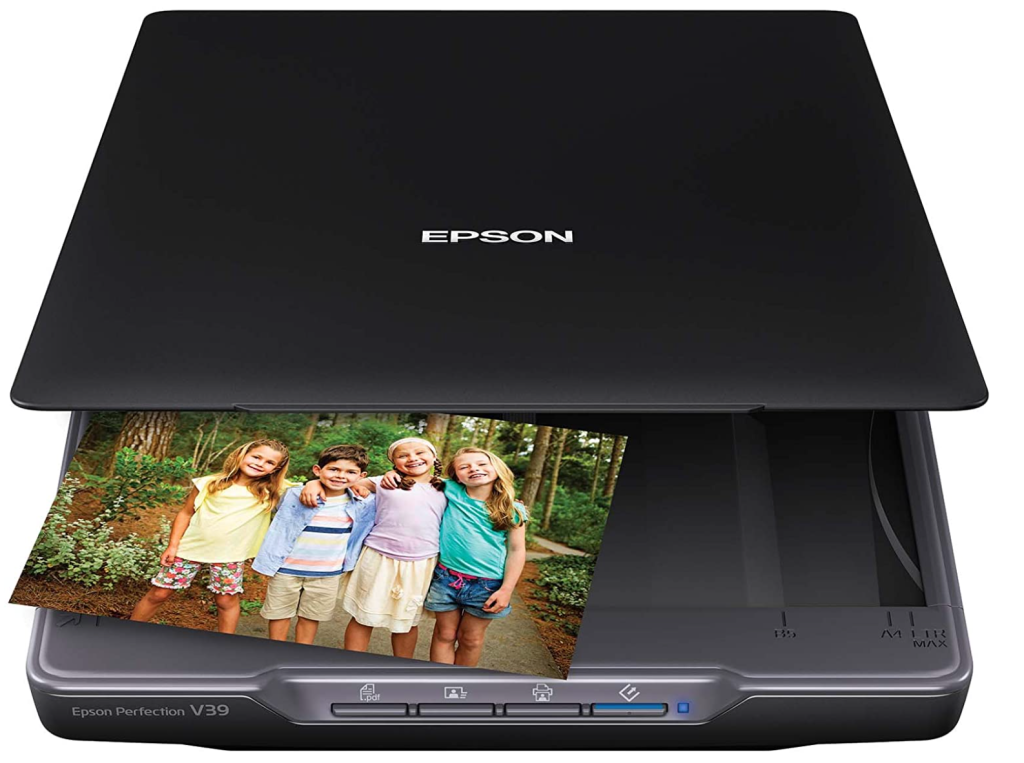 When you have a ton of photos to scan, the Plustek Photo Scanner can speed up the process. It scans 4 x 6 photos in about two seconds and only takes about five seconds to scan an 8 x 10 photo. You can get through that whole box of old photos in a couple of hours. It even has minor photo corrections for faded or dusty photos. With 600 max dpi, it’s not for professional use, but can certainly make digital copies of all your old photos quickly and easily. 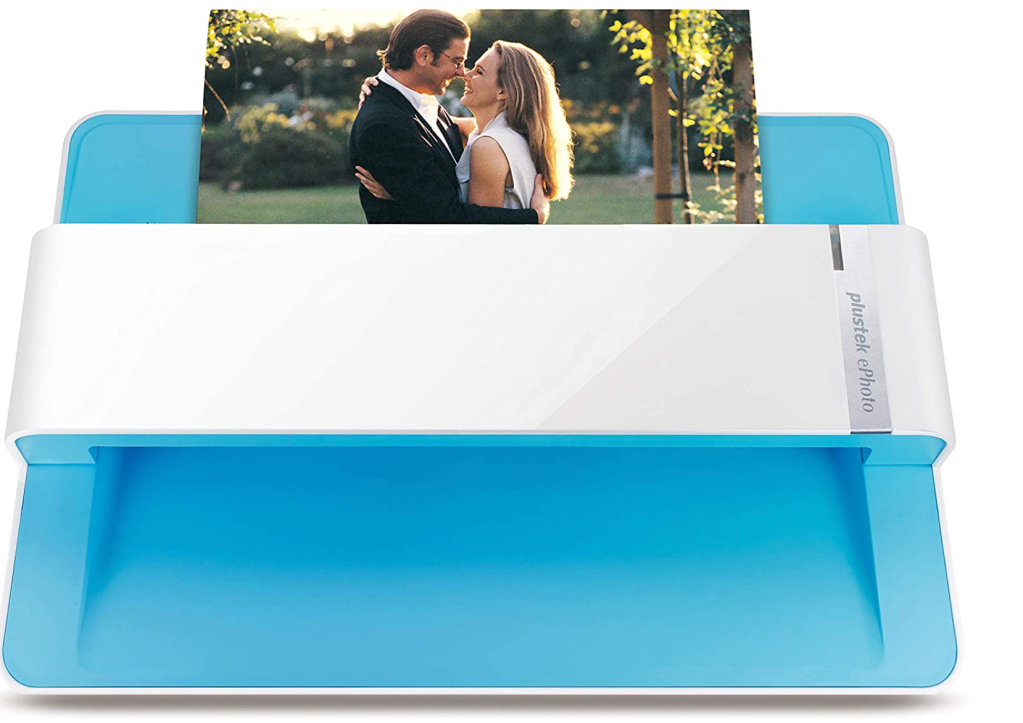 This photo scanner can rip through articles at a pace of 40 items per minute, taking care of your scanning needs in a relative flash. It can also create high-quality photo scans at 1200 dpi. In terms of photo scanning, it can scan a variety of photo sizes and save them to JPG, TIF, BMP, PNG, PDF and PPTX formats. It even comes with software to help eliminate photo discrepancies like red-eyes and small coloration flaws. 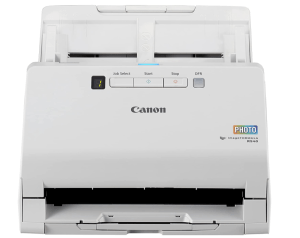 This is a scanner that is light and small enough to take with you. It only weighs 0.44 pounds and is about 9.5 inches long. That is small enough to put in your laptop bag and not even notice. It connects to both Macs and PCs via WiFi as well as USB (but why have wires if you don’t have to). The scanner has 300, 600 and 1050 dpi settings. Admittedly, there is some manual labor involved since you have to physically move the wand over what you want to scan, so it’s not ideal if you want to scan hundreds of photos, but it is a solid portable option. 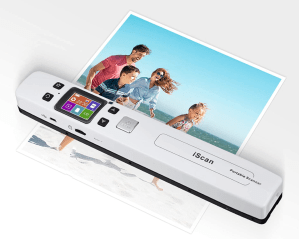 It’s hard to mistake a Toyota Corolla for a Porsche Boxster (no offense to Corolla owners). The Epson Perfection V850 is for professionals who demand detail from their photo scanners. The 6,400 x 9,600 resolution is seriously impressive, and the photo scanner can automatically repair old and slightly damaged photos. But if you want your digitized photo to be a carbon copy of the original, it specializes in exact reproductions, too. It can scan everything from high-resolution photos to negatives with scary precision. This photo scanner isn’t for the casual user, especially considering the price, but if you need perfectly digitized copies of your photos, this is the one you want. 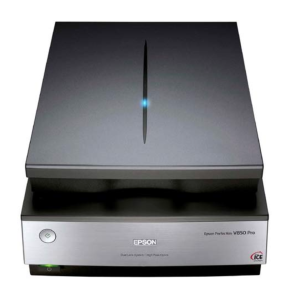 When you have a lot of 4 x 6 photos as well as 35mm, 110 and 126 film, the QuickConvert 2.0 can digitize that media in about three seconds per item. It has a built-in battery too, so you can take it with you from the studio to your home and not worry about needing a wall outlet. Speaking of being standalone, it doesn’t require a computer. Instead, it saves all scanned photos to an SD card as JPEG files. It’s certainly not the most versatile scanner, but it is great for those with an abundance of film. 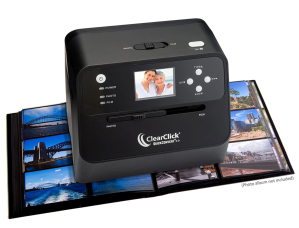 When it comes to actual film (not photos you’ve printed off already) the Kodak Scanza can make digital copies without having to send your film somewhere to be developed first. It converts 35mm, 126, 110, Super 8 and 8mm negatives. The screen displays what your image will look like and allows you to make slight color and brightness corrections. It’s basically a photo studio in a tiny package. 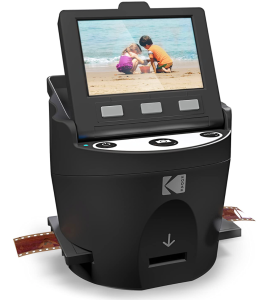 The Doxie X has a small footprint making it easy to tuck away in a desk when you don’t need it, and quickly pull it out when you do. There’s no need to connect it to anything. Simply feed your pictures through the scanner and you’re set. Since it has integrated WiFi, you can access your photos through the Doxie scanning app. And this photo scanner does more than just scan photos, so it can be your office warrior when you need to quickly scan things like documents and receipts.

Though it’s not a traditional photo scanner, this KODAK mobile film scanner is so well designed — and affordable — that we had to include it here. This portable, tabletop scanner makes it incredibly easy to scan film negatives and slides. It’s compatible with 35mm color film, 35mm black and white film, and 35mm color slides. With the free Android companion app, the scans will instantly get uploaded to your device. At $40, this is an affordable solution for anyone with lots of old photo slides or family films turning into dust. Surprise your grandparents or become the family historian with this nifty gadget. 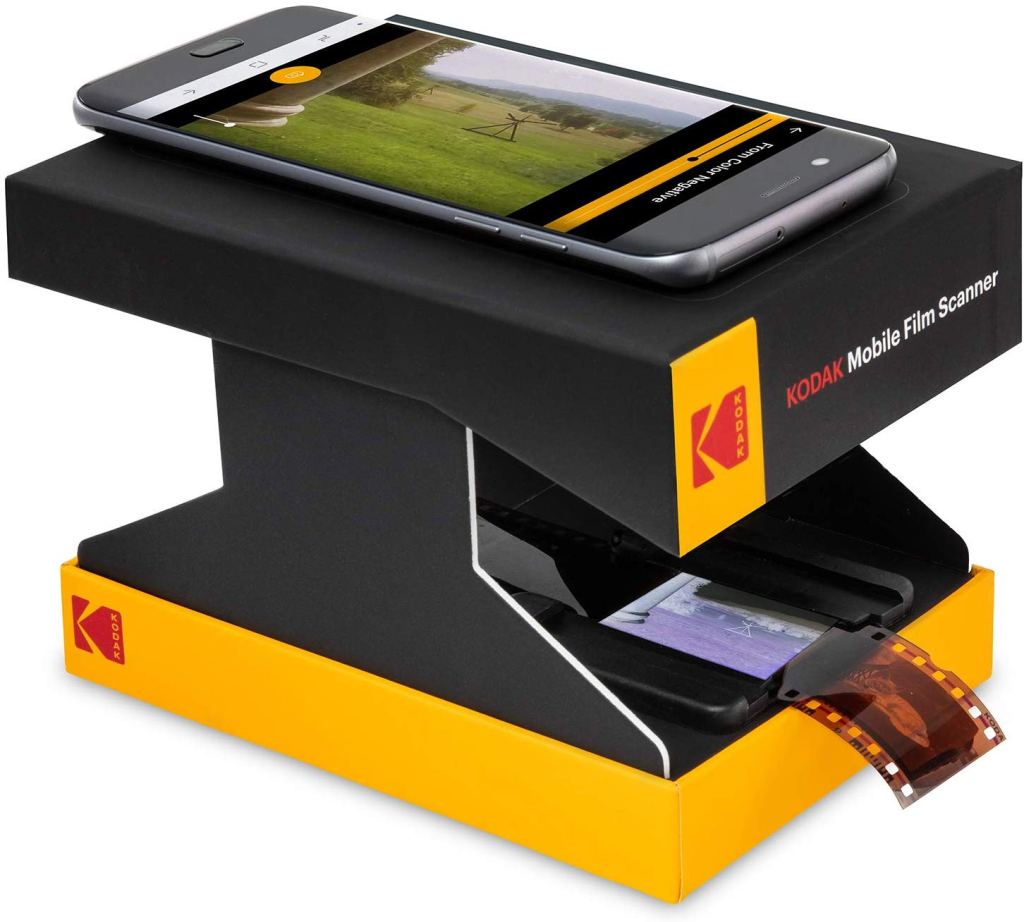