Besides underwear and fresh shirts, it’s hard to think of anything more valuable on a packing list than a portable charger. After all, toothbrushes and deodorant are easily replaced, and hotels and Airbnbs typically stock essentials like soap and shampoo. The corner store doesn’t always stock portable chargers, much less dependable ones. If you keep everything from directions to your boarding pass on your phone, you want to make sure you have enough juice to get you through your trip.

Even if you don’t fly often, having a portable charger is still great for public transit commutes, outdoor excursions, music festivals, and just about any time you might be away from an outlet. Sure, they add a little weight, but they also add peace of mind. Each option on this list can charge a phone multiple times, so don’t be surprised if your less-prepared friends ask to borrow your charger.

If you need serious charging capabilities for multiple devices, this power bank from Anker can charge an iPhone up to seven times on a single charge. And, thanks to the two USB-A ports, it can charge two devices at the same time. The 20,100 mAh capacity makes this a powerful device. It comes in four different colors; black, white, red and blue.

Pros: Capable of charging a smartphone between five and seven times on a single charge. 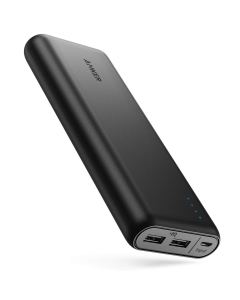 RAVPower’s sleek and powerful portable charger is a great option for anyone on the go who has multiple devices to charge. With three USB-A ports, you can easily charge three devices at a time. The power bank’s robust capacity means it can charge your phone multiple times; the iPhone X, for example, can be charged almost five times on a single battery. The LED indicator tells you how much juice is left in the battery, too.

Cons: Takes a while to completely recharge the power bank. 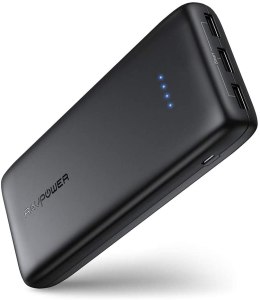 Qi-charging is quickly becoming the norm, found on many newer phones and other smart devices. That’s why it’s worth investing in a wireless power bank, and this one from Samsung is a great option. It has a sleek and slim design, and there’s a devoted landing pad to charge your smartwatch. And even if you don’t have a Qi-enabled device yet, you can always use it as a regular power bank.

Pros: Wireless or wired charging. Can charge a smartwatch and phone at the same time. Sleek and slim design.

Cons: Uses USB-A to USB-C connection, but USB-C to USB-C would be more convenient.

mophie is a trusted brand in the world of portable chargers, and it has a powerful 20,800 mAh capacity and two USB-A ports to charge two devices at once. Plus, the matte black design and minimal branding makes the device look a bit like the obelisk from 2001: A Space Odyssey, so it’s a good option for anyone who likes their devices sleek and minimal. Four small LED indicators on the side tell you how much power is left, and you can push the button to turn it on and check.

Cons: Somewhat bulky, so it may be best suited for travel, rather than daily commuting.

If you like to be prepared for anything, then this portable charger from Jackery is a solid option. It has two USB-A ports to power multiple devices at once, and, best of all, it has a built-in flashlight for any emergency situations. Bright LED indicators on the side tell you how much power is left in the charger, and the device itself is available in orange, black or silver. It can be used to charge an iPhone XS almost three times.

Pros: Can charge two devices at once. Has an LED flashlight and LED power indicators. 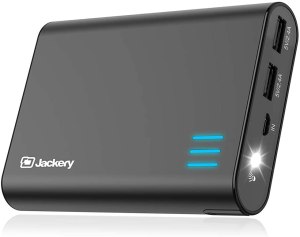