According to the Sleep Health Foundation, an estimated one in three people suffer from insomnia. If you’re having a hard time falling asleep at night, your phone or extra bright alarm clock could be to blame. That’s why using a projector alarm is such a sound investment. Instead of having to pull yourself awake to check the time, you’re able to see it on the wall.

Say goodbye to rolling over to check your alarm. We made a list of the top 3 best projector clocks on Amazon. Sleep soundly with a smarter alarm clock.

A sleek LED display complete with three brightness levels is the cherry on top of this sublime projector clock. Featuring a 180-degree swivel projector and a 90-degree rotary knob, you’re able to project the time on any wall anywhere in your room. This clock also includes a telescopic antenna for even better AM/FM radio signals and a smart dual alarm system, so you can set one alarm for yourself and one for the person sleeping next to you. 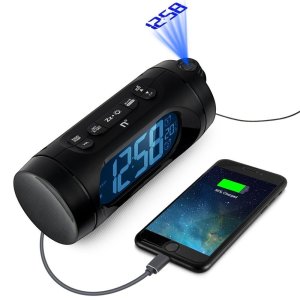 With an extra clear blue 3.6-inch LCD display, this projector clock is easy on the eyes and even easier on your sleep schedule. With a 180-degree swivel projection and a super smart display, this clock offers a pre-programmable dual alarm and automatically adjusts to daylight savings time. In addition to the AM/FM radio, an added AUX port is a place for your smartphone. 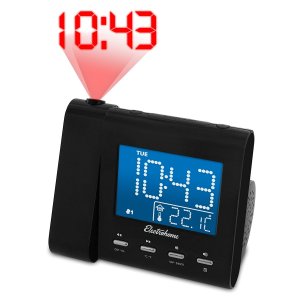 As far as alarm clocks go, it doesn’t get much sleeker than this. With an extra versatile 120-degree swivel and beautiful 5-inch blue LED display, you’ll have no problem seeing the time without having to toss and turn to either side. Four adjustable brightness levels make it easier to see at night or during the day and a built-in USB port lets you charge your devices while you sleep. Plus, with the powerful 33-inch antenna at the back, you’re able to pick up even more AM/FM channels. 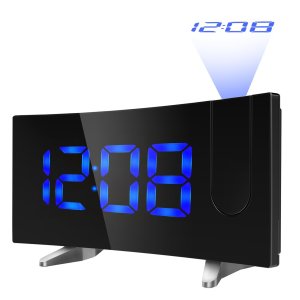