While it’s common for fashion to repeat itself, we don’t often see that with technology. Record players appear to be the one outlier in that category, with vinyl making a major comeback in recent years. Not only should you dig out your old crates of records from the garage, but new artists are also releasing albums on vinyl, often with bonus content, including photos and booklets. With all the vinyl making its way back into your life, you’ll need something to play it on.

We’ve done the research and found some awesome (and affordable) options for record players that you’ll want to take for a spin. You may even be tempted to get out your CD collection. Grab your vinyl (and a duster) and check out these great record players.

The DIGITNOW Record Player is one of the most affordable options in the world of record players and manages to still include a long list of impressive features. The suitcase style record player includes a FM radio, Bluetooth audio receiver, and can digitize vinyl into a MP3 format. Available in a variety of colors and designs, the DIGITNOW Record Player is a great option for anyone starting their vinyl journey. 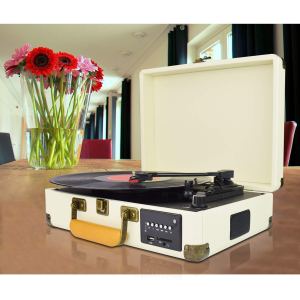 The Wockoder Portable Record Player is a belt-driven three-speed record player that is compatible with all sizes of records, making it the only player you’ll need for your collection. Thanks to the built-in speakers and Bluetooth compatibility, you can listen to your favorite vinyl and digital music through the record player. Plus, the Wockoder’s huge fan base raves about its quality and affordability. 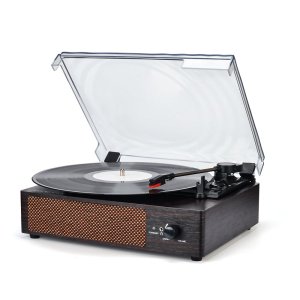 The Victrola 6-in-1 Wood Bluetooth Mid Century Record Player combines old school charm with new technology. Our team loves the antique look of the record player, which also has Bluetooth connectivity, a CD player, a cassette player, a FM radio, an aux attachment, a three-speed turntable, and built-in speakers. If you have a piece of music in any form, the Victrola can play it. 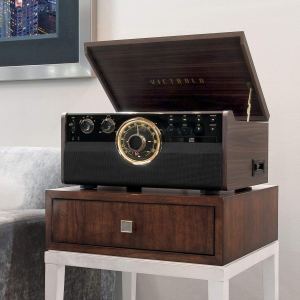 The TechPlay ODC35 is so fun that we couldn’t resist including it on our list. Designed with a retro feel, the three-speed record player also has a MP3 player, a CD player, an AM/FM radio and an alarm clock, as well as built-in speakers. Plus, it comes with a remote control, adding the ‘functional’ to ‘fun.’ 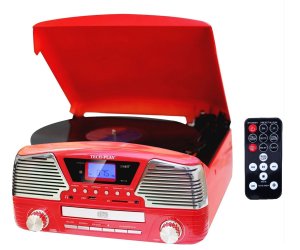