If there’s one common take away from films like WALL-E, I, Robot, Transformers and the whole Terminator series, it would be that robots are the future – and seemingly inevitable. Exposure to robots is only going to increase in the coming years with self-driven cars, even-smarter homes and more convenient robot-lead solutions in public places. Robots are quickly becoming the norm. Whether for yourself or for your kids, add one of these best robot toys to your household.

Not only do the best robot toys provide hours of fun and enjoyment, but they can also be advanced teaching tools that show kids useful life and job skills. And as 58% of current students under the age of 25 are currently studying for jobs that are expected to be radically changed by automation in the coming years, it’s more important than ever to be familiar with new tech. STEM learning toys incorporate numerous elements that are beneficial to users, especially when compared to other non-robotic toys.

What Are STEM Toys?

STEM is a learning approach that integrates science, technology, engineering and mathematics. By focusing on these elements, students acquire a surprising array of applicable skills. Many toy makers are now creating STEM toys, which are designed to either teach basic science skills or spark an interest in STEM subjects. Today, you can find STEM and robot toys designed for toddlers, tweens and teens.

Potential benefits of STEM learning can include:

So, if you just love robots, your tech mind could do with a tune-up or you’ve got kids you want to introduce into the world of coding and robotics, check out the best robot toys of 2020 below. At the very least, you’ll get hours of fun.

This robot is about as close to a robot you’ve seen in the movies as you can get. Cozmo is ready to be your loyal sidekick with a beginner-friendly interface and educational tools for kids and adults alike. This robot toy has been tested for both security and durability, and is easier than you might think to use. This robot syncs up with an app and is ready to meet your every command, and with a 4.5-star rating on Amazon and over 2,500 reviews you know this robot toy is a winner. 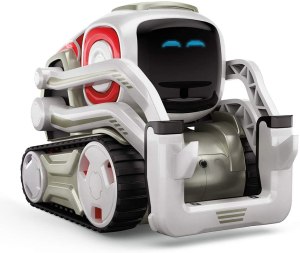 If you’re looking for an epic robot toy with all the bells and whistles your high-tech kid wants, this is a great choice. It’s for the more advanced STEM-interested kid, and includes 601 pieces that are ready to be built and coded into a fully-functional robot. Once your robot toy is done, it’ll be able to walk, talk and even play games with you and includes the ability to sync up with a free EV3 programmer app that controls your robot. The setup includes an intelligent EV3 brick, 3 servo motors as well as touch, color and IR sensors. There are 17 different possible robotic designs with this kit so your child can explore different options with creativity whilst playing with their educational toy. 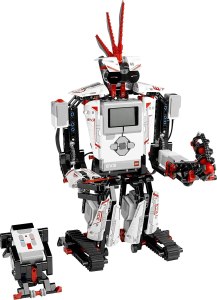 This solar-powered robot teachers your child about robotics, STEM subjects and environmentalism as it runs solely on solar power and requires no batteries. Everything you need to construct your new sun-powered friend is included in this kit, and once completed it’ll be able to walk outside on sunny days with no problem. Regular household recycled materials can be added to your robot to turn him into a dinosaur, monster, or other creature with personality, and the instructions for that step are included in the kit as well. 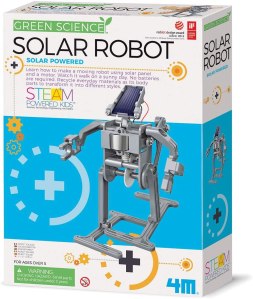 This award-winning toy has a variety of functions that will inspire a love of STEM and education in young kids. This voice-activated robot will instantly respond to your kids and dash around the room, which makes it a great distraction for kids stuck at home. Like the best robot toys, it helps kids learn about computer programming and cause and effect. As an added bonus, kids can attach LEGO blocks to the robot to customize it to their liking. 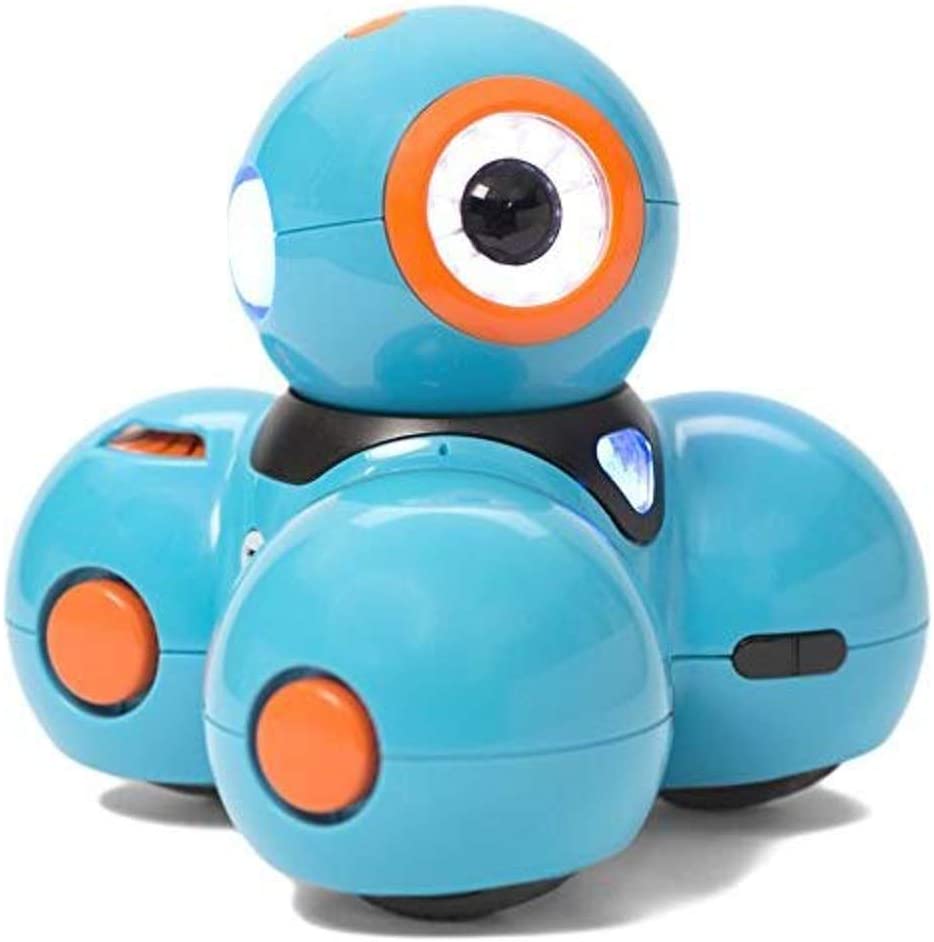 On first exposure, the Novie Interactive Smart Robot may look simple and unassuming, but once you get it out of the box and set it free, you’ll realize there’s a whole lot going on with this little robot. Available in three different colors, Novie is able to perform over 75 individual actions as well as learning 12 different tricks. It also understands hand gestures and works in one of three different training modes. You can teach Novie beginner, intermediate, and advanced tricks, meaning this compact, pocket-sized robot isn’t just fun for kids. Additionally, should your Novie ever meet another of its kind, you’ll get to watch them interact with each other. 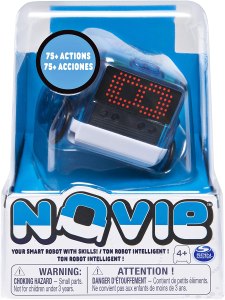 For some kids, the promise of a dinosaur-shaped anything will be enough to signal excitement. So add colorful lights, a life-like roaring sound and the ability to walk, and this BEESTECH LED Walking Robot Dinosaur Toy is sure to be a winner. What further makes this a great toy for kids is that it breaks down into 16 different pieces, giving your child brain exercise and the fun of putting it back together again using the included, kid-friendly screwdriver. Plus, it’s the most budget-friendly offering on our list. 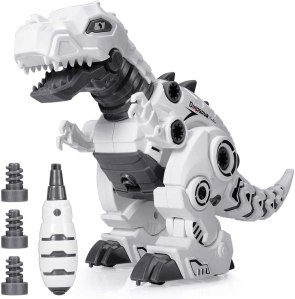 If your kid often sees mom or dad using a screwdriver and would get a thrill out of being able to play along with their own screwdriver-worthy tasks, you may want to check out this Educational Insights Design & Drill Robot. The fun robot is aimed at kids between the ages of three and six and has removable, snap-on arms alongside numerous screw-ready holes which let your child figure use the included, easy-to-use, kid-friendly screwdriver. The set boasts 15 multi-colored bolts along with decorative stickers to further add to the STEM learning experience during play. 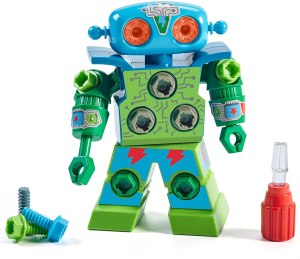 This Sikaye RC Robot is a human-shaped device that sits just over 10 inches tall. It comes with two different ways to control its movements. The first is the included infrared remote control which lets you make the robot sing, dance, walk and interact with you. Alternatively, you can choose to use only hand gestures to control your robot. It’s capable of 50 different actions and acts as a great way to encourage creativity in kids over the age of six. Its LED face further adds to its ability to interact while the included USB cable makes charging it easy. 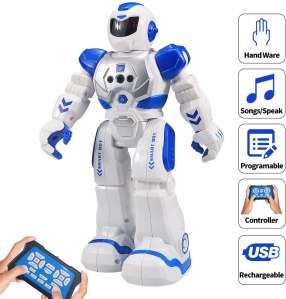 Having the WolVol Remote Control Robot Police Toy in your home is like having your very own Robocop. WolVol is built to last and boasts a high-quality construction that can endure the rigors of day-to-day life with a child. The robot comes with a 10-channel remote control which lets you make it walk in all directions, turn around, dance and fire missiles. For added stimulation, you’ll also find several beautiful and flashing lights spread over its body, while the built-in speaker means certain moves are accompanied by sound effects. This really is a great gift idea for kids who love robots. 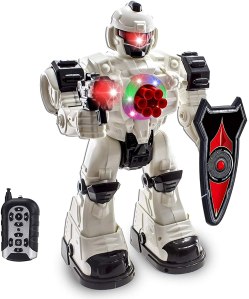 If you’re looking for a fun and easy way to introduce your child (or yourself) into basic programming, you may want to try the Makeblock mBot Robot Kit. This easy-to-assemble, bright blue robot is capable of several programmable modes, including obstacle avoidance and following a line. The compact device can be controlled using the remote control or with a smartphone via the Makeblock app. It’s also constructed from an aviation-level aluminum alloy which is durable and difficult to scratch. 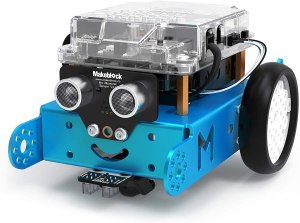 The Fisher Price Think & Learn Code-a-Pillar Toy is aimed at kids between the ages of three and six and provides a fun introduction to the principles of coding. The motorized bug’s body is made up of eight rearrangeable body segments that command the device to perform various actions including go forward, go left and go right. For a more interactive experience, the Code-a-Pillar also features blinking eyes, makes fun noise and includes two target discs to give users a challenge and encourage problem solving, planning and critical thinking. 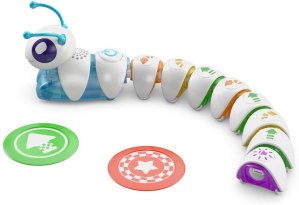 You’re guaranteed to have a ball, quite literally, with this Sphero SPRK+: App-Enabled Robot Ball. This tough, motorized sphere is scratch-resistant, waterproof and comes with a protractor, an inductive charging base and maze tape to give you a whole host of fun activities to perform. It can be controlled and programmed using smartphones and tablets with the Sphero Edu which also lets you take control of the ball’s programmable sensors and LED lights. This handy little device is a fun introduction to coding and provides plenty of hands-on STEM activities for users. 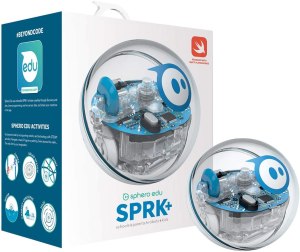 With the LEGO MINDSTORMS Robot Inventor in your hands, your imagination is the limit. As the first update to the LEGO’s MINDSTORMS series in seven years, this 949-piece kit introduces builders to their choice of five different personality-packed robots, including Blast, a stoic action hero, Charlie, a quirky sidekick and Tricky, a four-legged robot. Alternatively, it’s easy to come up with your own robot creation, too. For easy-to-understand programming, the kit uses drag-and-drop coding language on Scratch and comes with a number of challenges and activities to make learning fun. Right now, you’ll have to pre-order the kit, which is set to launch this fall. 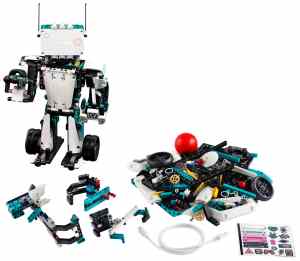 If you’ve always dreamed of having an R2D2 or Johnny-5-esque robot friend, the Anki Vector Robot is for you. This adult-friendly device is capable of responding to sight, sound and touch, meaning you can ask your new robot friend to take a picture of you, show you the weather or even control smart devices around the house using its built-in Amazon Alexa. This highly independent robot can look after itself and is capable of navigating obstacles as well as self-charging when required. Furthermore, as it’s wifi-connected, this robot is constantly updating with new features and skills for you to enjoy. 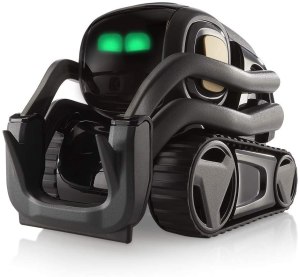 Disk firing is this robot’s not-so-secret weapon against the other robot toys of the world. The latest model includes voice recording that you can trigger at the press of a button, and the kit includes soft foam disks that your finished robot can fire out of its chest on command as well. The included 2.4gHz remote control includes buttons for all of the available functions of your RoboShooter including sliding, walking, dancing, firing the blaster and shooting those disks. This robot also speaks five different languages including English, French, German, Italian and Spanish. This robot, unlike others, arrives fully assembled so if your child is more of a player and less of a builder, this is a great pick. 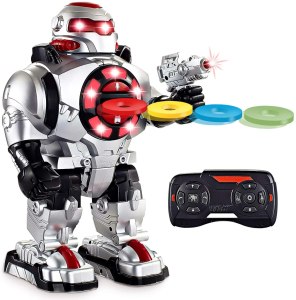