Sleeping under the night sky and staring up at the stars is a magical experience. Given that playing out the real thing often requires setting up a comfy outdoor blanket and staying out into the early hours of the morning in often cold and damp conditions, stargazing is one activity few people actually get around to doing. Handily, a more comfortable way to stargaze is to invest in one of the best star projectors. These fun devices allow you to enjoy a universe of star-filled visuals from the comfort of your own bed.

With a star projector in your home, it’s possible to transform any space into your very own planetarium. These smart devices are a fun way to deliver a sensory experience by filling your surroundings with stars. And, it’s not all about the visual element, either, as the best star projectors offer many other benefits for you to enjoy. Here are a few of them:

Every home has a use for a star projector. We’ll bet that once you have yours, you’ll find yourself using it more than you ever would have guessed. Movie nights, pillow talk and perhaps even bath time will reach new heights. Below, we have selected the nine best star projectors for a star-studded sleep.

By optimizing a direct diode laser, glass optics and the advanced technology focused on holographics, the BlissLights Sky Lite Star Projector is capable of creating an intergalactic scene on the walls and ceiling of your bedroom. Little green stars float among the patented design of a giant blue nebula cloud which fills the majority of the mesmerizing atmospheric glow. There are also three user-friendly buttons built into the projector which allow you to control the brightness, rotation and various different lighting effects. 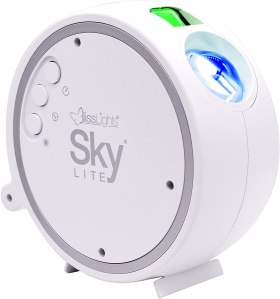 Considering the lower price tag of the HOKEKI Star Projector and its multiple lighting modes, this device offers plenty of bang for the buck. It sports a minimalist design that is easily navigated and makes it easy to choose between the space-inspired or sea-inspired projection themes. Additionally, there are eight different color combinations, which are selectable using the centrally located buttons. 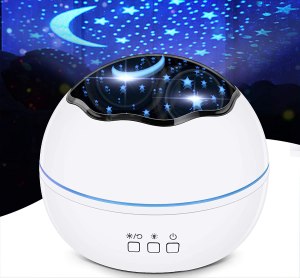 Give your baby’s nursery a dazzling upgrade with the Luckkid Baby Star Projector. This lighting device works well as both a star projector and a generic night light, as you can easily remove the piece of star-and-moon covered film which surrounds the light. This sphere-shaped projector is compact in size and measures only five by six inches, taking up very little space despite its huge visual impact. For remote use, the device requires four AAA batteries. However, it’s also possible to power the device using the included USB cable. 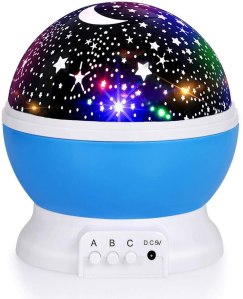 Not only does the Eicaus Star Projector fill a space with stunning star-filled visuals, but it also lets you dive deep into the ocean through an underwater projection. There are 10 color options to choose from as well as three adjustable brightness levels, meaning you can choose a customizable visual to enjoy. Plus, the projector comes with a remote control which makes it possible to select and change your settings without leaving the comfort of your seat. 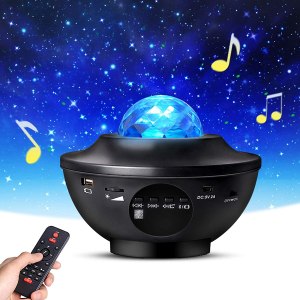 Cartoon-like space illustrations surround the central lighting crystal of the Riarmo Galaxy Star Projector, making it a colorful addition to any child’s bedroom, even when the device is switched off. Once powered on, you can select from four LED colors and 16 lighting modes, each capable of creating a slightly different atmosphere. There are three different lighting levels as well as flow speed and sounds effects. Plus, you can play soothing breathing sounds as your little one nods off, while the one, two or four-hour auto shut-off function can be used to save energy. 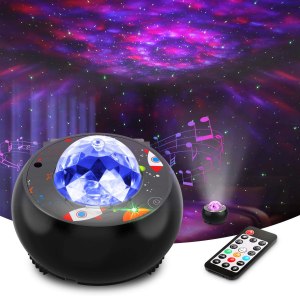 Located centrally on the front control panel of the YSD Star Projector is a red-lit digital timer to show how many minutes until the device powers down. This countdown can be controlled via the main piece of equipment itself or using the remote control which is supplied with the projector. A single push of the timer button adds an extra five minutes. You can also select between one, three and five-hour presets using dedicated buttons. And, color selection, rotation and warmth can also be controlled through the front-mounted controls or the remote. 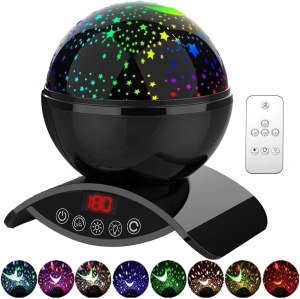 With the SOAIY Star Projector, it is possible to let Amazon’s Alexa do the hard work for you, as you can control this device through your words alone. From switching it on or off, changing colors or picking different modes, it’s as simple as using your voice or the accompanying Smart Life smartphone app for a hands-free experience. It’s also possible to pre-program preferences, such as a time to turn on, meaning your room can be star-filled on your arrival home. You’ll also be able to enjoy six available color variations and a breathing mode to accompany the calming pulse of the beautiful illumination. 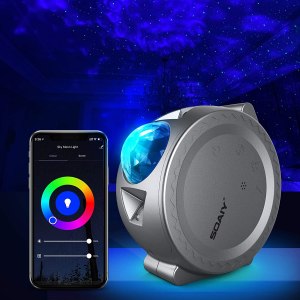 Make the most of the LBell Star Projector by projecting a galaxy of visuals around the room and playing your favorite songs or ambient sounds at the same time. Additionally, the Bluetooth speaker can work with the sound-activated mode to make the lighting change in time to the beat of the music. You can also choose between three brightness levels and 10 dynamic projections. Plus, you will be able to control your device using the included remote control. And, you get to pick between a white or a black base for your projector dome. 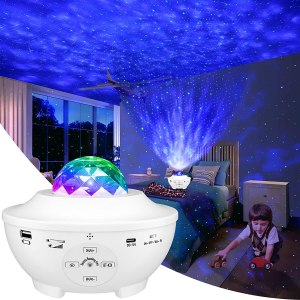 The Retround Galaxy Star Projector combines all the best features of a star projector to create a top-quality device which can be enjoyed by all ages. 12 color settings combine blues, greens, purples and reds for a greater visual appeal. The device design houses three lenses, one on top of the other, along the front panel for greater variety and clarity in your displays. The top lens emits a funky nebula projection; the middle lens spreads stars across the room; and the bottom lens produces the moon for a truly beautiful display. 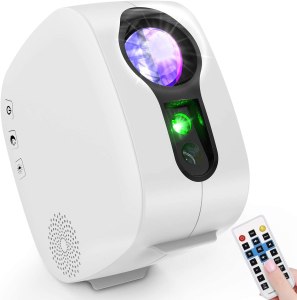