Sometimes, life down here on earth is a real buzz kill. From wars to famines to literal pandemics, things can get rough for the human race and we all need a way to escape. It’s going to look different for every person, some might opt for a rash guard and a day of surfing the biggest waves they can find, while others might want to strap on a pair of hiking boots and get lost on the trails. Some may also want to orient their telescope towards the sky, peer into it and be transported to galaxies far, far away.

Telescopes are amazing visual innovations that have brought us closer than ever before to the other moons and planets we share a solar system with, as well as other solar systems we share an entire galaxy with. Investing in a good telescope opens you up, quite literally, to other worlds, and is one of the best ways to widen your perspective.

What to Consider Before Buying a Telescope

This telescope has a 400 millimeter focal length as well as a 70 millimeter aperture, and a fully coated optic glass lens for transmitting crystal clear, stunning images that also protect your eyes. It comes with two replaceable eyepieces as well as a 5×24 finder scope and mounting bracket with cross-hair lines to make finding objects easier. The telescope has an AZ mount that makes moving it around easier, and an adjustable alloy tripod for setting it up in just the right spot. 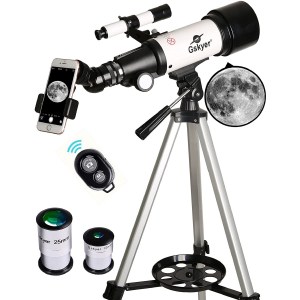 Sometimes, the best star gazing happens in a remote location you’ve got to travel to. Whether it’s the middle of New Zealand for a solar eclipse or a mountaintop for the full moon, your telescope very well may need to join you in a remote location. This one is perfect for that. It’s got a lightweight frame that’s easy to carry, and a 70mm objective lens for zooming in. It comes with a 20mm and 10mm eyepiece for viewing, as well as a full height tripod and a travel backpack designed to be taken anywhere. 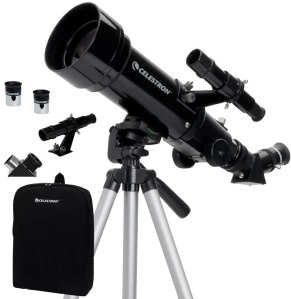 Celestron’s iconic orange tube design is infamous in the telescope world of stargazing aficionados both for its look and for being one of the highest quality telescopes available. This one has a much higher price tag than other options on this list, so we recommend this for more experienced stargazers who are very passionate about the past time. It’s got an 8-inch primary mirror for light-gathering abilities as well as a fully-automated mount. It’s got a database of other 40,000 celestial objects and can automatically locate and track things for you. It’s got a single fork arm design that’s easy to set up and take down, and the SkyAlign technology can get it ready and aligned in just a few minutes. 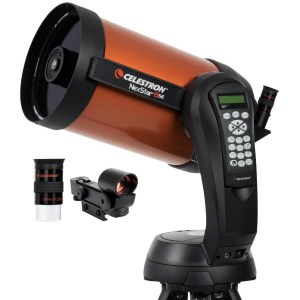 This telescope is designed to be entry-level, and perfect for beginners as it’s easy-to-use but powerful at the same time. It’s got a manual German mount and a Newtonian Reflector design. It’s got a slow-motion altitude rod for smooth, accurate pointing, and it’s compact and lightweight making it portable. It comes with two different eyepieces, a 20 millimeter and four millimeter, as well as a 3x Barlow lens for tripling the power of each one if you’d like. This telescope is also built for equally clear image viewing during the day and night. 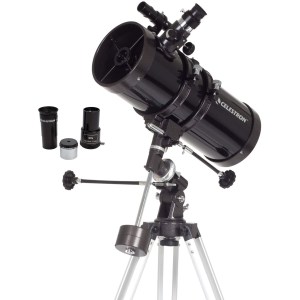 This telescope is built for being placed on a desk or tabletop, rather than needing a whole corner or deck of space, so if you need something compact it’s a great pick. It’s got a “grab-and-go” design and weighs just 6.5 pounds. It’s got a 90 millimeter aperture in order to gather just enough light to capture star clusters, nebulas and other bright solar systems. It’s got a sturdy tabletop base but can also be attached to a tripod, and it’s got an EZ Finder II reflex sight that makes aiming easier. 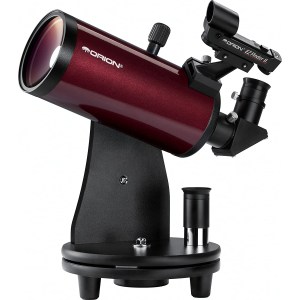 This telescope has a mid-range price point and a tabletop, compact design that can accommodate both beginners and more advanced users alike. It’s designed to automatically lead users to more than 14,000 celestial objects with the IntelliScope Computerized Object Locator. It’s got a six inch aperture for sharp, clear views of bright planets like Mars and Jupiter, and the 750 millimeter focal length can give you great optics for sky objects that are further away. It’s got a compact design that’s slightly heavier than the Orion above, at 25.5 pounds, and it comes with a bunch of useful accessories. 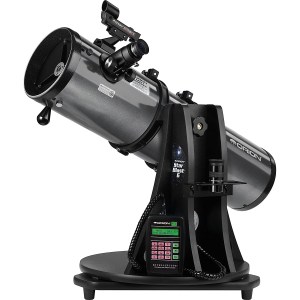 This telescope is made to integrate with your smartphone so you can take beautiful astronomical images easily. It’s got an easy setup, with a foldable accessory tray, smooth tripod legs and a lock knob. Plug in the built-in smartphone adapter and you’re good to go. It’s got an asymmetrical mount that offers a stable weight distribution and great light, and it comes with a red LED flashlight so you can make adjustments in the dark if need be. 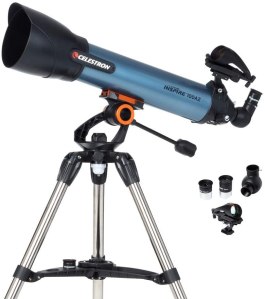 This is one of the most expensive, high ticket telescopes we found, but if you’re a professional looking to drop some serious coin on a machine that’ll give you crystal clear images, this is it. It’s built with a large aperture for bright, bold images, and it’s got a collapsible design so you can transport it a bit easier. It weighs almost 100 pounds, so it’s a heavy machine and not built for portability, but the design is as accommodating as possible.

It’s made with 94% reflective, multi-coated borosilicate primary and secondary mirrors for amazing views, and it’s got a 42,000 object database that can automatically route to a whole bunch of locations in the solar system. It comes with two eyepieces and a finder scope as well. 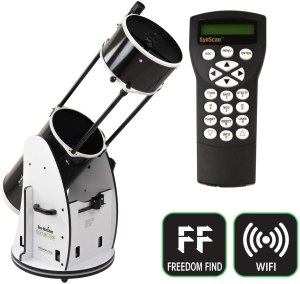