In the age of cellphones, a two-way radio might seem like an outdated piece of technology. But if you’re ever around a construction site, a department store with a lot of employees, or even a school, you’ll notice that the use of two-way radios is still widespread. That’s because it’s easy to maintain constant communication without having to dial any numbers or wait for the other person to pick up, and it’s easy to talk to multiple people at once in a way that is less intuitive with cellphones.

If you work on a job site, having a two-way radio is essential, but there are other places where owning a two-way radio is incredibly handy. If you’re the outdoorsy type, chances are you’re very familiar with the lack of cell signal on lengthy hikes, mountains, and pretty much anywhere that isn’t the city. Being able to maintain communication with the other people in your party shouldn’t be dependent on spotty or nonexistent cell towers. Two-way radios allow you to quickly and easily keep in touch at short ranges, which can be a lifesaver if anyone gets lost. They’re worth keeping as part of an emergency kit, too. Plus, they can be good for families with young children. Whatever you need a two-way radio for, these options all operate on powerful ultra-high frequency channels (UHF), giving them good range and clarity even with obstructions.

This set of two walkie talkies comes with 16 channel presets which can be changed, and they’re powered by rechargeable lithium-ion batteries. The range of the signal is dependant on the landscape, but without obstruction, the signal can reach up to five miles.

Pros: Comes with detachable earpieces, has a built-in LED flashlight. Good range even in residential areas.

Cons: Some reviewers had issues with the durability of earpieces. 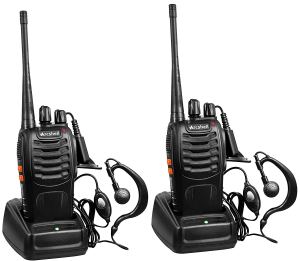 For a more heavy-duty, high-performance option, this two-way radio is capable of operating at the 136-174 VHF range and the 400-520 UHF range. It’s the widest UHF range of the options on this list, which gives more channels of communication. It also transmits at eight watts, which is four times the power of Arcshell option.

Cons: Only includes one unit. 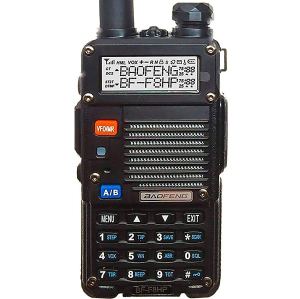 Despite being a compact and affordable option, this small walkie talkie set from Motorola operates on UHF, comes with 16 channels, and is capable of reaching several miles. It’s a small option with a lot of the same abilities as more expensive options.

Pros: Easy to use, making it a good option for families with younger children. Good range, UHF frequency.

Cons: Runs on AAA batteries, rather than rechargeable batteries like the other options. 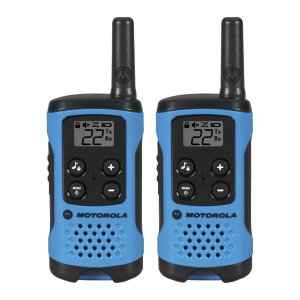