Since its release in the fall of 2020, the Oculus Quest 2 has claimed the throne as the best all-around VR headset. It’s one of the few VR headsets that you can pick up and use without having to connect it to a computer or having to use your phone as a display. While it’s not the most powerful VR headset around, it is absolutely the most accessible. When you consider how easy it is to set up and the number of top-tier VR titles supported by this headset (this includes amazing games like Half Life: Alyx and Superhot), it’s easy to see how the future success of virtual reality tech runs through this self-contained VR headset.

But it’s not just the Oculus Quest 2 that is making waves in the VR world. The HTC Vive Cosmos headsets continue to innovate and take technical leaps forward. Oculus also has another impressive headset in the form of the PC-based HTC Rift. Tech companies such as HP and Valve have also been dipping their toes in the VR waters in recent years. Even Nintendo has made a VR play with the Switch thanks to its Labo VR Kit.

And while most of these devices give you everything you need to get started out of the box, the best VR accessories will make your experience even better. To enhance your VR sessions, you’re also going to want some of the best VR accessories, which can make the headset more comfortable to wear for long periods of time, extend the battery life of the headset, and even extend the functionality of the device if you so desire.

With that in mind, we’ve rounded up the best VR accessories to complement your new VR headset.

As mentioned, the simplicity of the Oculus Quest 2 when it comes to the set up is a big part of what makes it so amazing. But what makes it even crazier is the price. For $299, you’ll not only get the headset but also a pair of motion controllers that allow you to fully interact with immersive virtual spaces. With these three things alone, you need nothing else. No PC, no power outlet, no sensors. Just the Oculus Quest 2 kit. As a result, Oculus is pretty much the only name in VR gaming and entertainment that casual and hardcore audiences alike. You could strap this thing on your most tech-averse relative and they would probably love it within five minutes. Just give it a try. 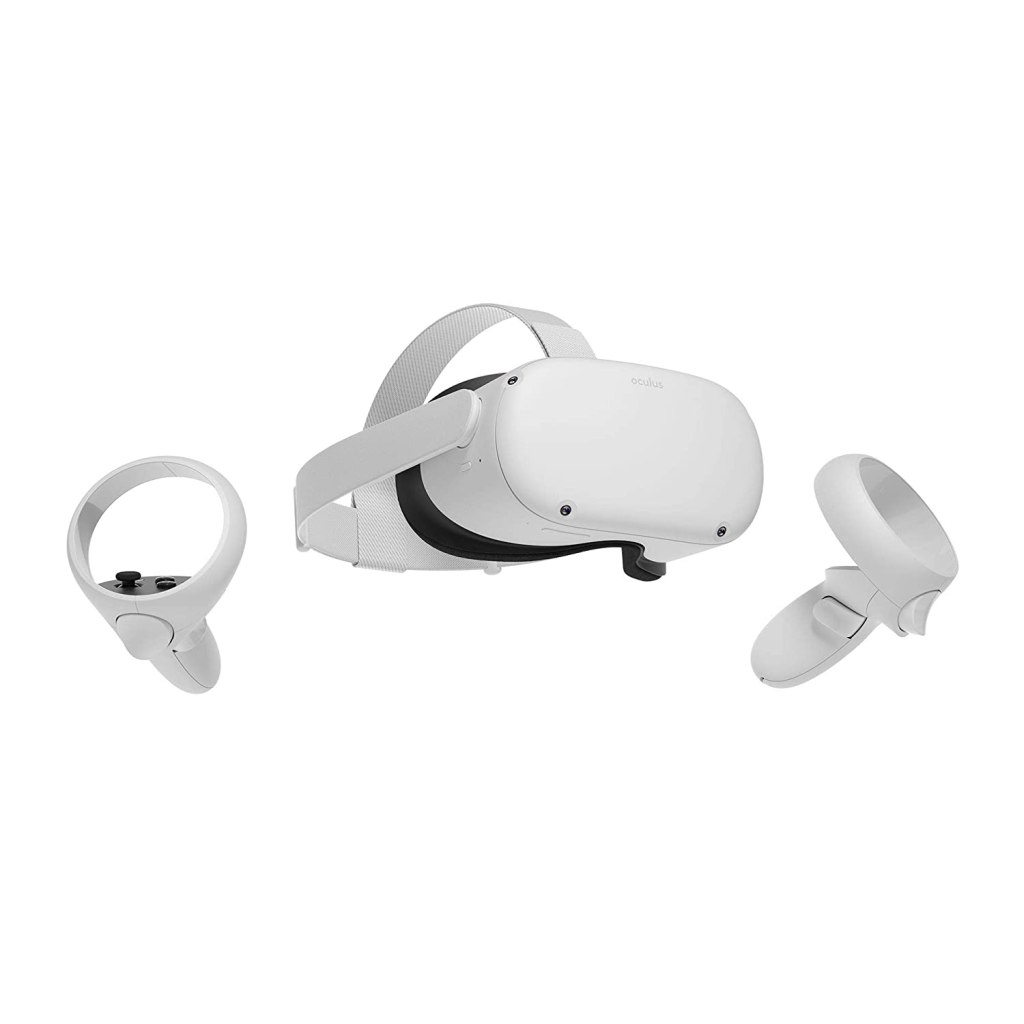 Sure, you can simply experience VR by sitting in a chair or at a desk and remaining stationary. It will definitely be fun, but it will still pale in comparison to the experience of experiencing VR while moving your entire body. Unfortunately, you might be tethered to a PC or a power outlet, and if that’s the case, you’re going to want a cable harness so that you can move around a room without being hindered. Also, you don’t want to risk getting tangled up in them, falling and hurting yourself. This cable management system from KIWI Design makes use of ceiling mounted pulleys that are affordable, simple to install and will have you flying through digital dimensions in no time flat. 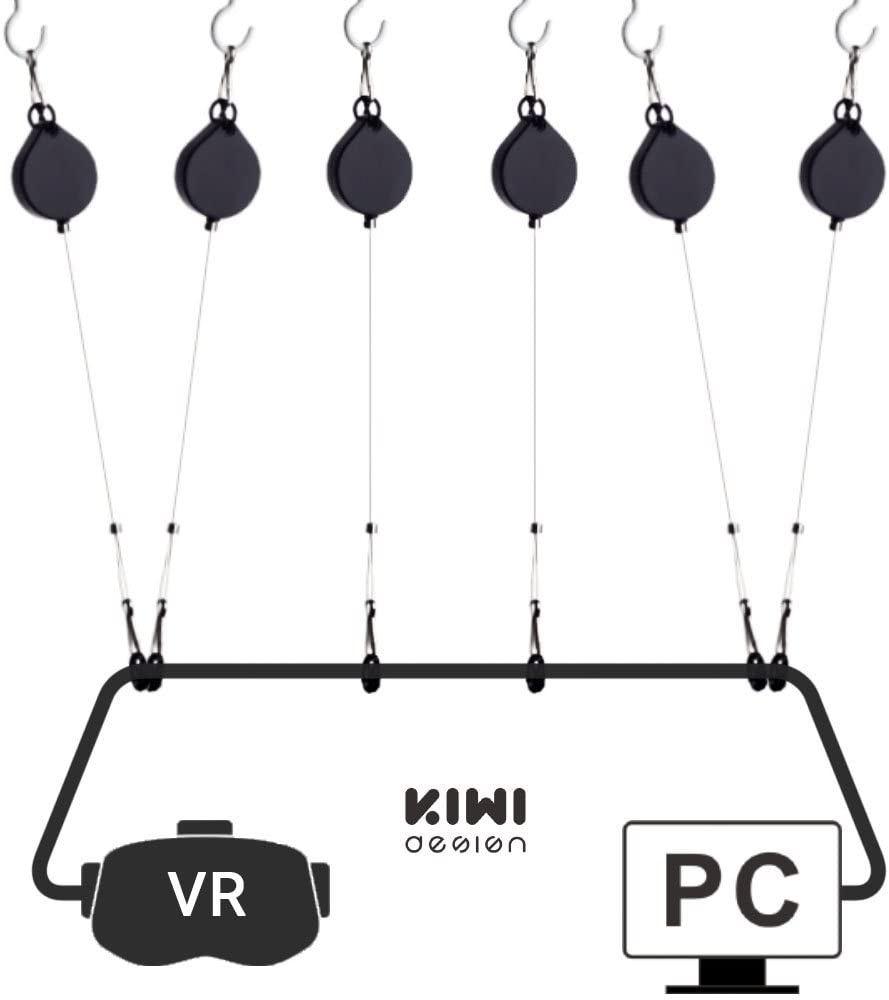 Since the Oculus Quest 2 doesn’t yet support wireless earbuds, you’re going to need a decent pair of wired earbuds if you want the most immersive experience possible. The Logitech G333 VR Gaming Earphones are made especially for the Oculus Quest 2, and what sets these apart from other options is that the cord’s length is custom-fitted for the Quest 2 so that you don’t have excess wires getting in your way. And if you’re worried about splurging on a pair of earbuds that you’ll only use with your Oculus, fret not: These are reasonably priced VR gaming earphones. 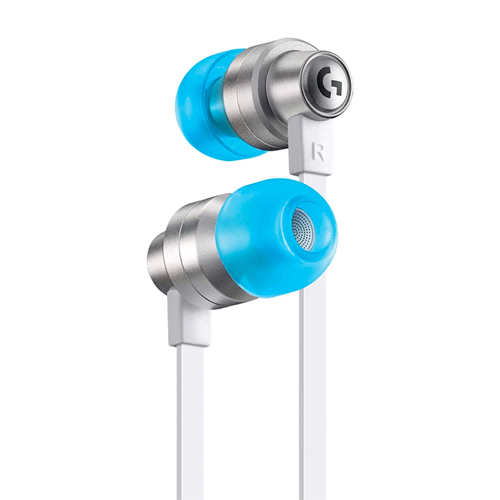 You might not think it would matter much since the screen of a VR headset is enclosed over your eyes, but VR in the dark is actually a thing. Believe it or not, there is a good reason for this: when you’re using your headset in a bright room, light can seep in where your face meets the mask and take away from that feeling of immersion. But when you’re in a room that’s dark your VR rig can’t track your head, hands and body all that well. This is why you need an IR illuminator.

For less than $30, this little device will fill up a room with infrared rays that are invisible to you, but extremely visible to a camera, letting it track your hands, along with objects in the room, without issue. In fact, it can throw IR beams up to 80 feet, so it can get real bright even if you’ll never be able to detect it with your own eyes. There will be a time where you really want to ‘get in the game,’ and when you do, you’ll be glad you had one of these. 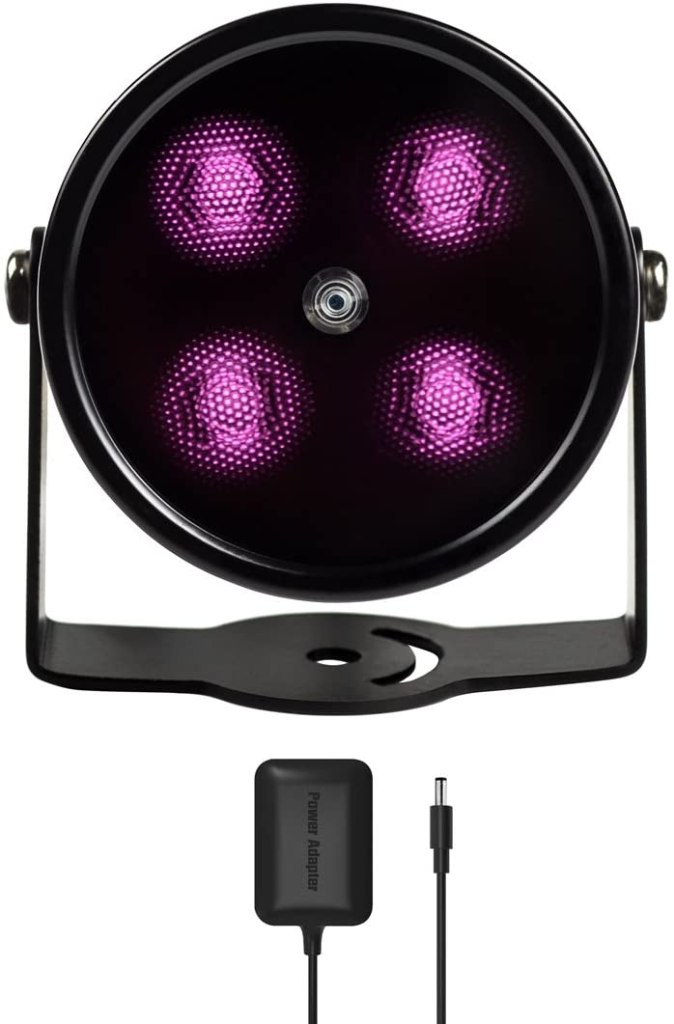 One thing many people don’t realize about the Oculus Quest 2 is that while it’s a self-contained, all-in-one VR solution, you can still connect it to a gaming PC via Oculus Link and play PCVR games like would with the Oculus Rift. But in order to do that, you’re going to need a decent USB cable that can not only handle the technical requirements but is also long enough to give you the freedom of movement you need while tethered to your computer. The official Oculus Link Headset Cable is certain to keep your headset charged and the action flowing through the display for hours on end. Sure, this is a premium cable, but it comes with genuinely premium features as well.

Despite the fact that it has standard USB-C to USB-C connectors, this cable is not comprised of standard copper wire, but rather fiber optic strands that offer max data transfer speeds of 5 Gbps. While your Oculus Quest 2 may not need that much speed right now, you’re basically futureproofing your setup with this cable. Also, it’s 16 feet in length, so you won’t ever have to worry about having your movement limited. 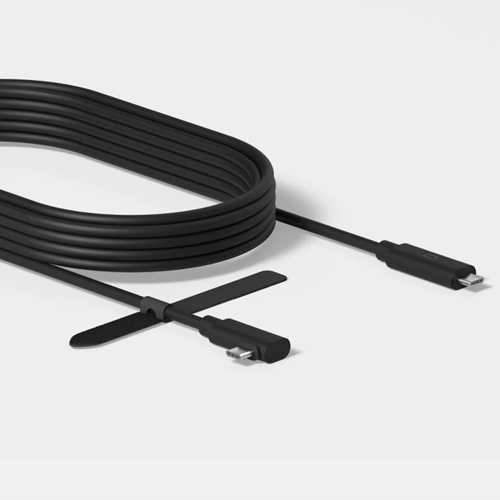 OK, so maybe you’re looking for an Oculus-compatible cable that works with Oculus Link while charging your headset and has enough length, but doesn’t cost an arm and a leg. We recommend the Party Link USB-C to USB-C cable. This USB cable may not be as technologically advanced as the official Oculus cable, but for now, it does everything you would want it to, and it’s also 16 feet long. But the best part is that it costs less than $30, making this a budget-friendly alternative to the official Oculus Link headset cable. 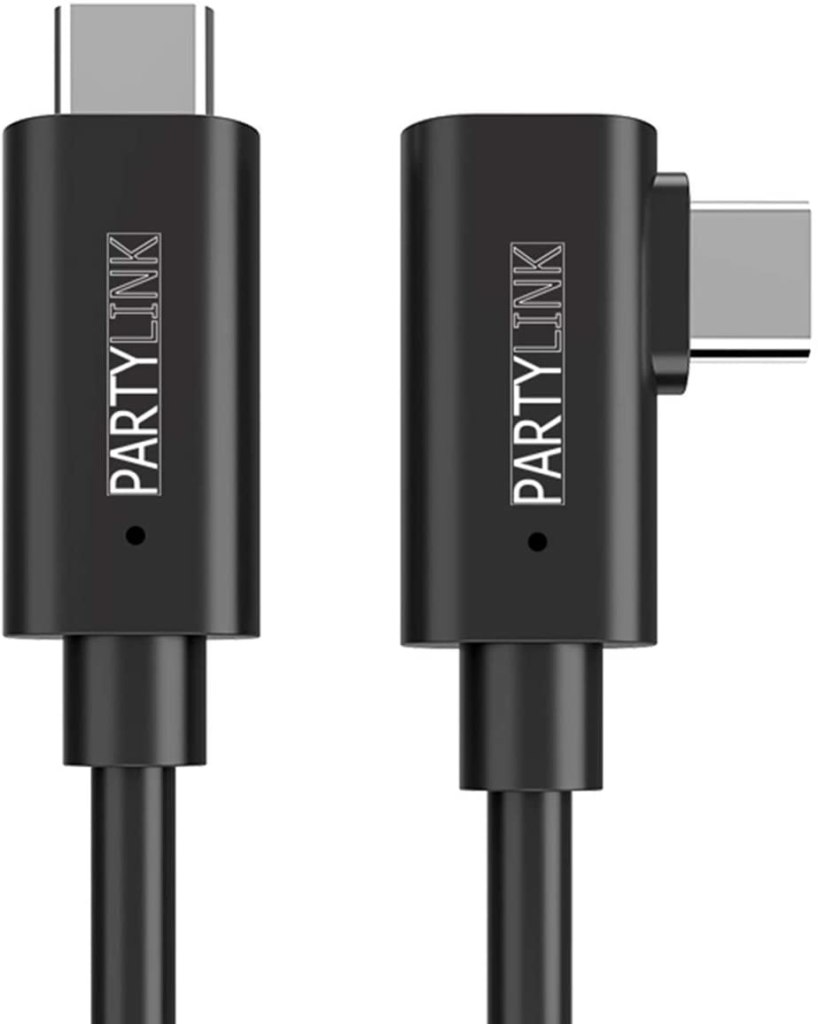 If you ever plan on taking your precious Oculus Quest 2 out of the house, simply tossing it in a bag is not the best idea if you want to keep it pristine. Instead, consider picking up the Quest 2 Carrying Case, which is made of a sturdy felt material and has enough room to fit your headset, an Elite headstrap, controllers, cables, chargers and more. At the very least, you’ll have peace of mind that some rogue foreign object in your bag isn’t covering your Quest 2 in scratches. 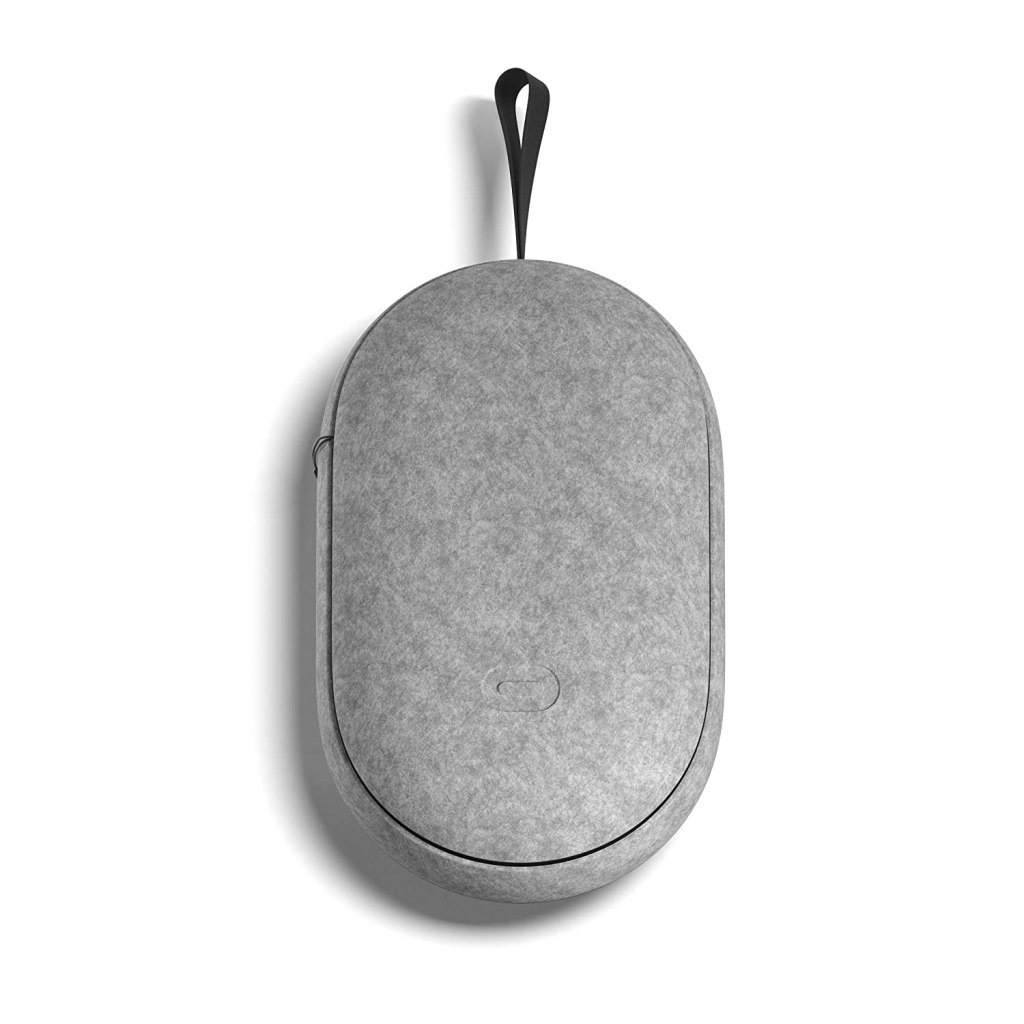 This may seem like a non-essential accessory for your Oculus Quest 2, but you should have a good cleaning cloth like the MagicFiber on you at all times. Whether it’s the fingerprints that might accumulate along the external cameras and sensors of the headset or any dust and debris that may settle on the lenses of the display itself, you don’t want anything taking way from the performance of your VR headset. With the microfiber material, these wipes can quickly remove any layer of oil or grime so that you can focus on the game. They’re not particularly high tech, but they are one of the best VR accessories. 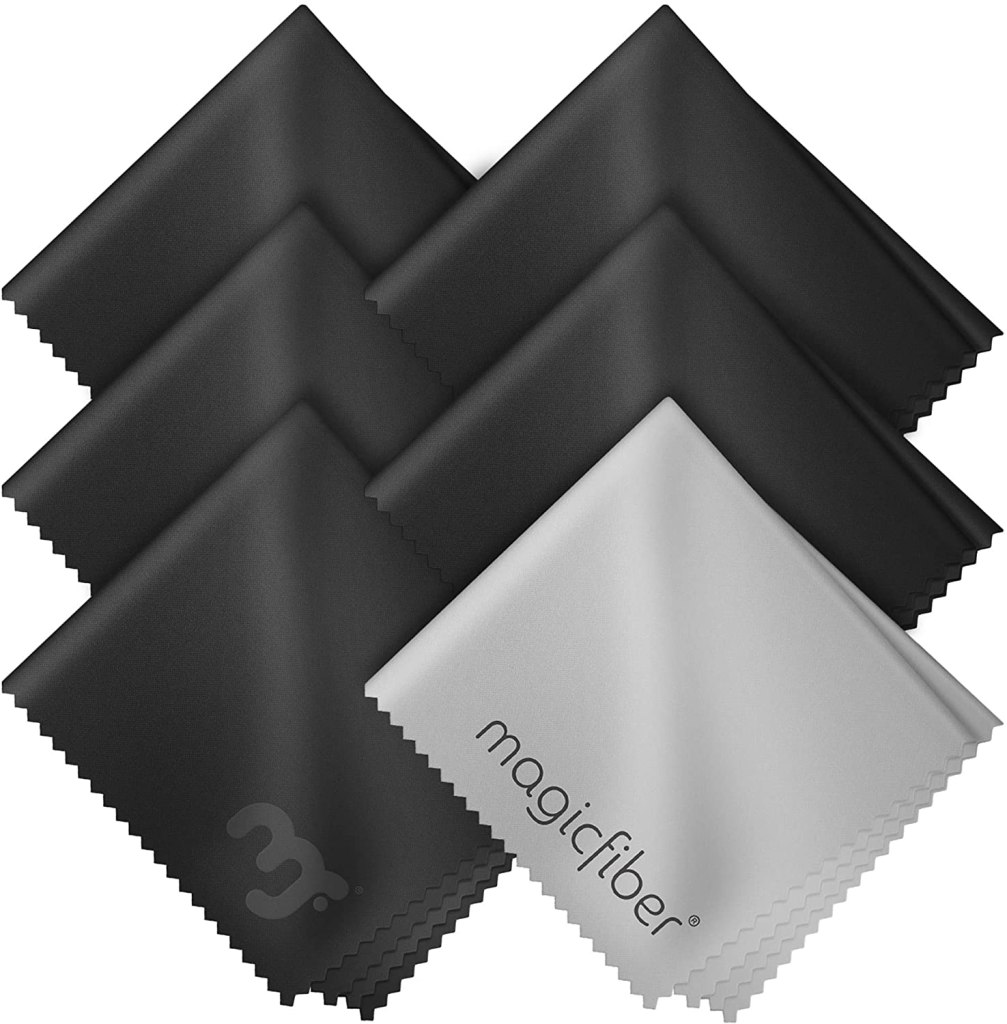 Sure, you can always charge your Oculus with your Oculus Link Headset Cable, but it would also be nice to have a home for it where you can set it down and not have to constantly deal with plugging in a loose cable. And what about your Oculus controllers? How are you charging those?

Enter the Oculus Charging Station from Anker, which not only docks your Oculus Quest 2 headset so it can charge but also includes rechargeable AA batteries for your Quest controllers, so you can dock and charge those at the same time. Will this radically transform your in-game experience? No. But it will make having a VR setup in your home far less clunky, and that’s something that should be valued. 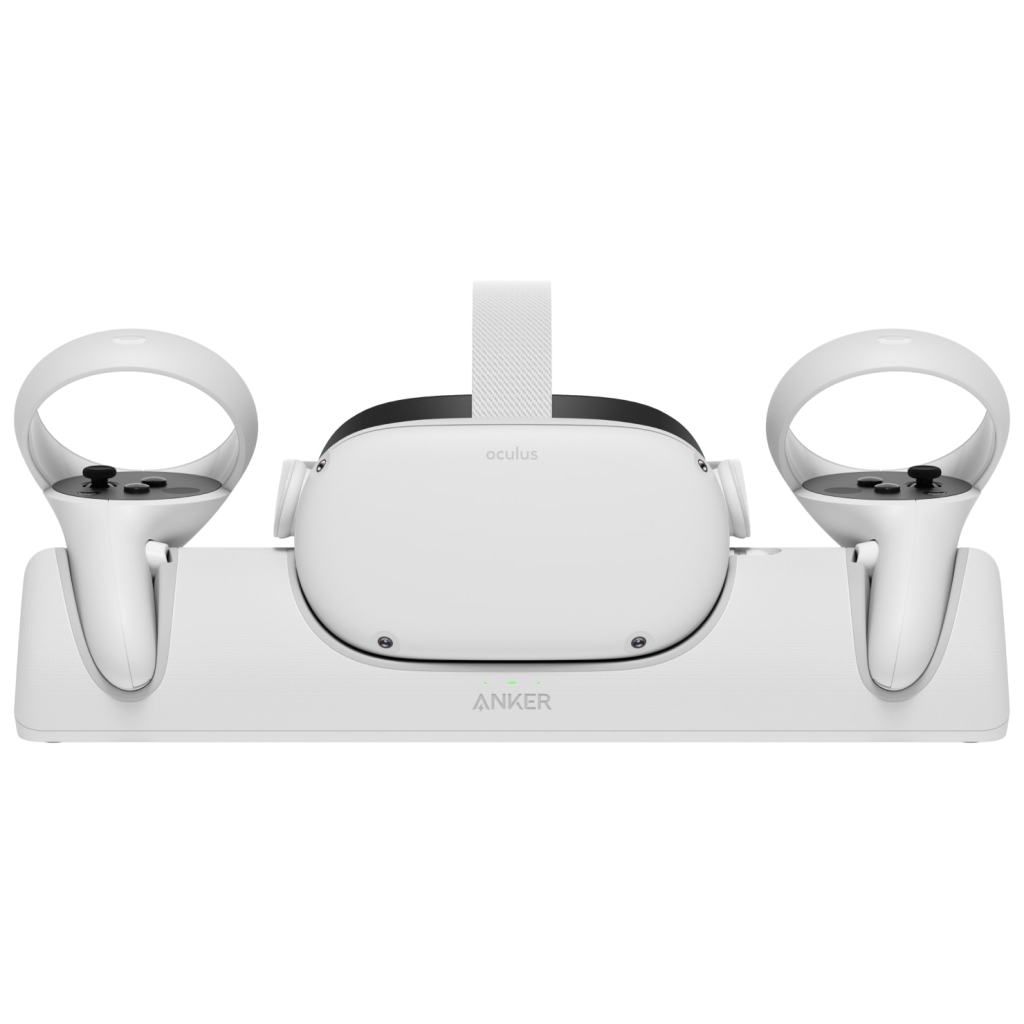 On its own, the Oculus Quest 2 battery can give you 2-3 hours of VR action. That’s not bad at all, but if you’re lost in the world of Half Life: Alyx or exploring the weirdness that is VR Chat, you just might want that session to last longer. In that case, consider adding an external battery to your VR rig. With this thing strapped to the back of your Quest 2, you’ll get two more full charges (roughly 5-6 extra hours) to do with as you please in the digital realm without having to plug into a power outlet or step back into meatspace. 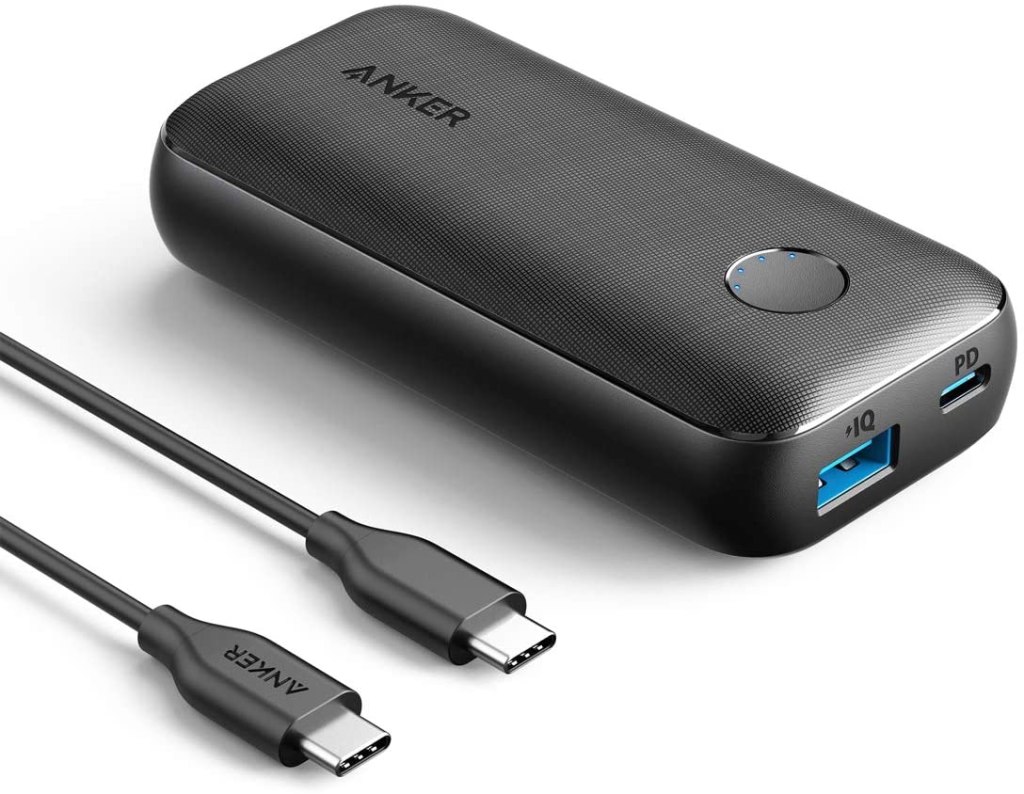 Out of the box, the Oculus Quest 2 comes with a stretchy, fabric head strap that is used to mount the VR headset to your face. This works well, but if you really want to take a step up in comfort and quality, consider the Quest 2 Elite Strap. Made of a more rigid plastic, this head strap offers better support so that longer VR sessions are just as comfortable as the shorter ones, and it even comes with a rear dial that can quickly tighten and loosen the strap. 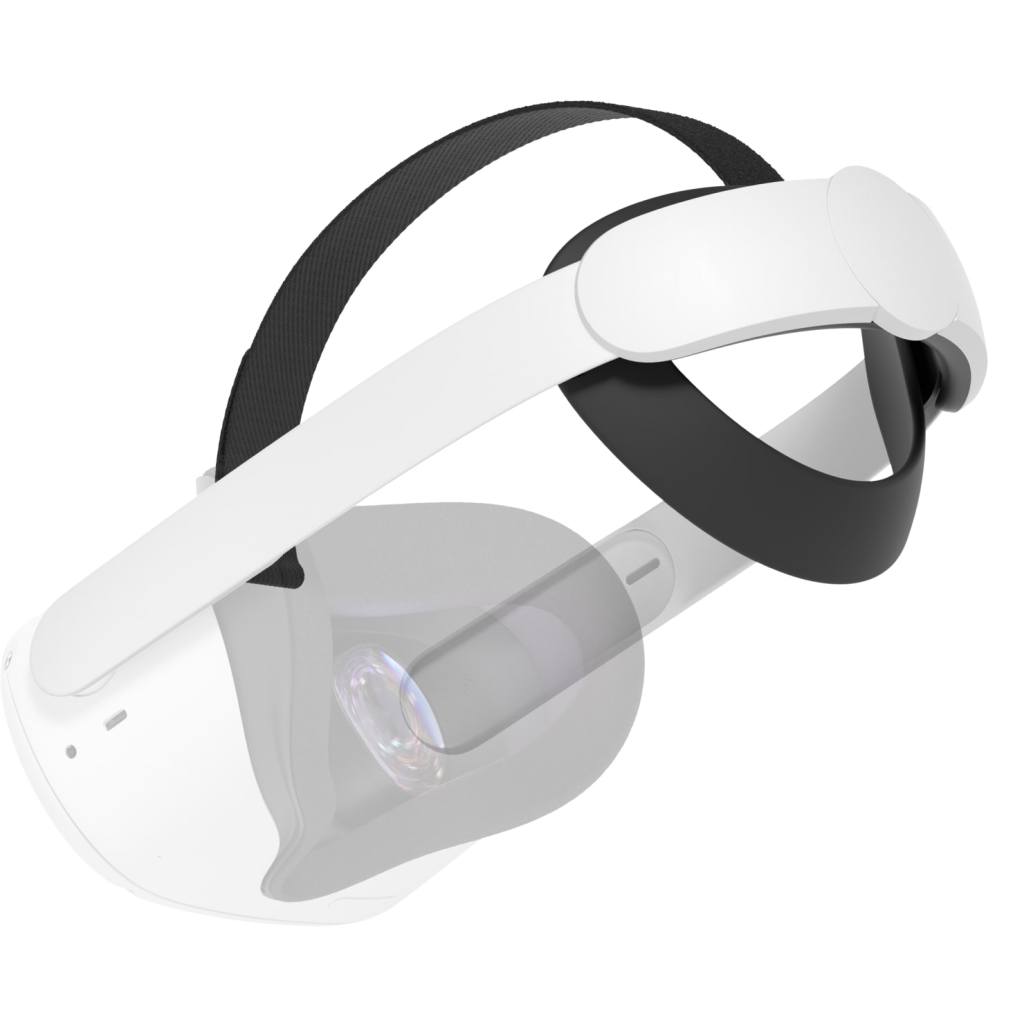