When Jeff Bezos flew to space, kind of, he was probably hoping for headlines about the glorious dawn of commercial spaceflight, brought to a grateful humanity by our benevolent billionaire overlords. Instead, he got a hundred headlines about his space cowboy outfit and the undeniable phallic qualities of the Blue Origin New Shepard rocket.

Now, the model rocket company Estes Industries has created a lifelike model of the rocket Bezos rode to low earth orbit, and you can pre-order it now for $69. Nice.

While that might seem like a number perfectly designed to capture the internet’s heart, the company behind the rocket says it’s merely a coincidence. (If you’re not already aware, the number 69 has considerable meme-power because of its sexual connotations.)

“We use our standard pricing methods to ensure our customers receive top value product and experiences for affordable costs,” said Mallory Langford, President of Estes Industries, in an email to Spy. “Proceeds from this rocket will support Club for the Future, Blue Origin’s Foundation mission to inspire youth to pursue STEM careers.”

After the launch of the New Shepard, social media commenters and journalists alike couldn’t help but notice that the rocket really did look decidedly like a penis, with a mushroom tip and two flared protrusions at the base. From certain angles, you can even see a vein-like pipe running the length of the shaft.

Now, to be fair, all rockets have a phallic shape. It’s an aerodynamic necessity until we can figure out how the aliens are designing their UFOs. That being said, the Blue Origin rocket did seem especially phallic, a fact that couldn’t have escaped the attention of Estes Industries. The company released a Youtube video promoting the model’s release, and many of the comments on the video are about exactly what you’d expect.

We asked Estes Industries if they thought the phallic comparisons were unfair. They demurred.

“Estes is proud to produce scale models of many rockets throughout history,” Langford said. “It is our mission to inspire the next generation of leaders and explorers through the model rocketry experience. The Blue Origin New Shepard is providing payload flights that have supported a wide range of research, education, and technology development. Our payload capable Estes model was designed to emulate this experience and bring the world of rockets into the homes of families nationwide.”

Estes Industries is a family-run business originally launched in 1958, a time when the space race had captured the imagination of the world. The company partnered with Club for the Future, Blue Origin’s educational foundation, to produce the New Shepard model rocket.

“The partnership with Club for the Future, Blue Origin’s foundation, was a natural fit for Estes, as both organizations share a passion for STEM education and introducing kids to the wonder of space,” the company said in a statement to Spy.

Each order of the New Shepard model will also come with a Club for the Future postcard, which kids can mail back to the foundation to be flown on a future Blue Origin launch. According to a recent press release announcing the launch of the model, “After flight, the postcard will be returned with an official ‘Flown to Space’ stamp as a unique keepsake.” 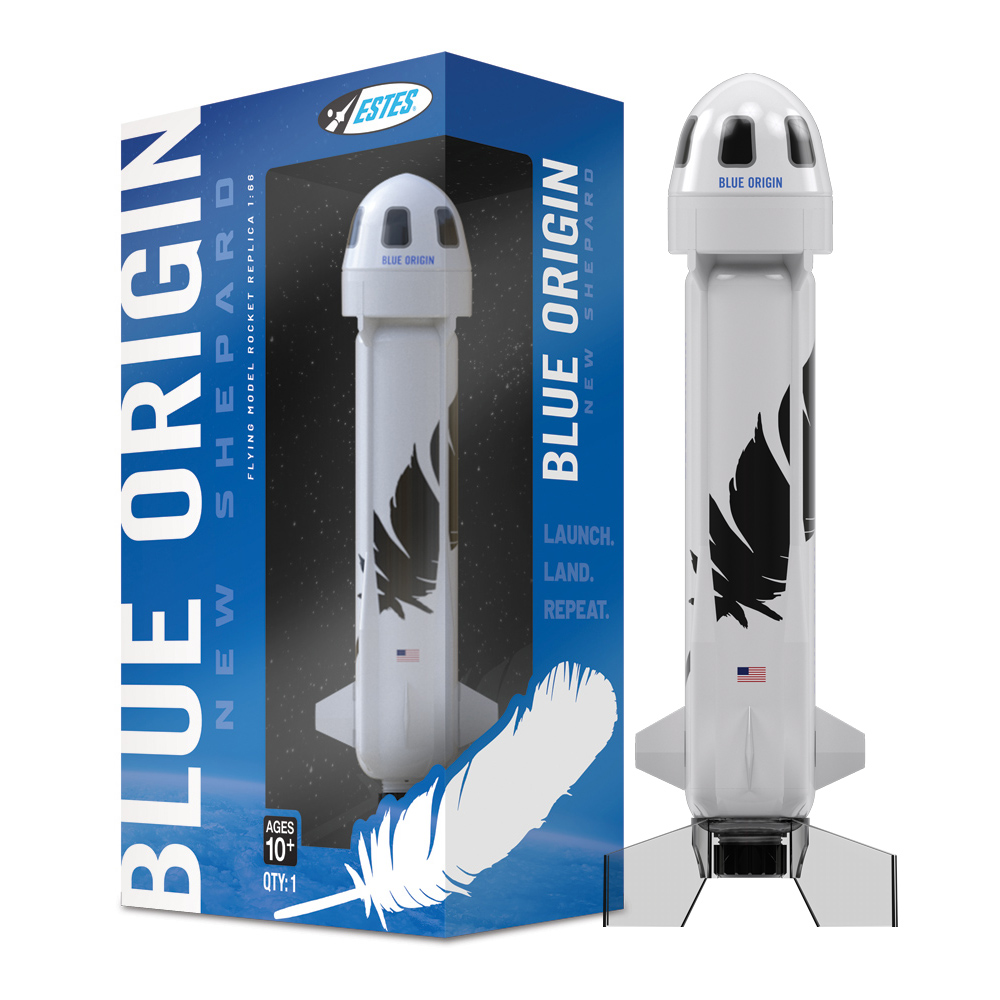