I don’t consider myself a keyboard snob, especially when I’ve been content to use the stock keyboard that came with my last desktop computer. Sure, there was a time when I was using one of the fancier-looking mechanical gaming keyboards from Logitech, complete with color-changing LEDs that command attention. Still, since I use a laptop most of my day, I’ve been using mostly compact wireless and foldable keyboards for portability.

That leads me to this conundrum: Why would I entertain the idea of using a keyboard that can cost upwards of $349? That’s a hefty amount that could go towards a Nintendo Switch, but after using the Drop Ultrasonic Keyboard, I understand why people would pay so much for one. 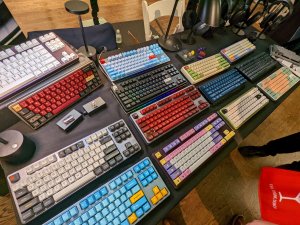 During an event in New York City, I came across a booth showing off a lineup of keyboards. I didn’t give much thought to checking them out. Like seriously, what’s special about keyboards, right? However, once I got a closer inspection of the keyboards, I realized why Drop’s lineup is unique.

First and foremost, the variety of colors and key combinations  sets it apart from the other mass-produced keyboards. I love some of the novel touches that Drop keyboards offer, such as the custom molded Avengers-inspired keys and the bright color combinations they had on display. 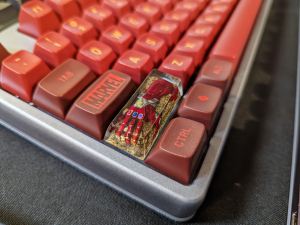 I’ve been using the Drop Ultrasonic Keyboard for a couple of weeks, and it features keycaps constructed from thick doubleshot ABS, so they don’t suffer from fading much like traditional printed keycaps. Furthermore, the Ultrasonic keyboard’s purple shades are an instant draw against the pristine white surface of my desk. 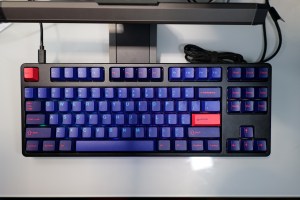 The designs are thoughtful, plus I was impressed by the sheer variety and combinations you can choose from. I can’t think of any other keyboard maker that’s as meticulous. Drop keyboards aren’t flimsy either, evidenced by the Ultrasonic’s nearly 4-pound weight. It feels so dense that you could probably knock someone out if you swatted one at them.

You’ll want to buy a proper wrist rest because it’s the one thing it’s lacking. Not all keyboards have them integrated, but it would help with the support while typing for long periods. 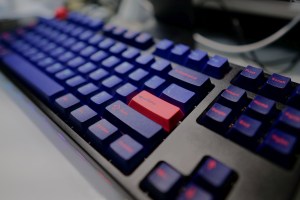 As for the keys themselves, they’re sculpted and feel solid. There isn’t a dedicated numeric keypad, but that makes it more slim and compact-looking on my desk. Nevertheless, it took a while to get acquainted with this layout. 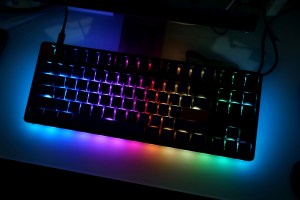 Lastly, there’s some added flair to the Drop Ultrasonic thanks to an LED strip that runs along the entire edge of the keyboard. You can also see some of the LED lights bleeding from each key, which adds to the minimalist aesthetic of the keyboard.

Another quality that sets Drop keyboards apart is their unique responses. I’m referring to how they feel when the keys are pressed and the sounds accompanying them. Using the Drop Ultrasonic Keyboard, I can discern the subtle difference when the backspace is pressed. 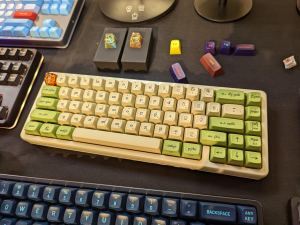 Leaving a bigger impression, I was surprised by the other responses I felt typing with the other keyboards I checked out. For example, I didn’t expect a keyboard to feel like I was poking fluffy marshmallows, but it did with one of them. With the Drop Ultrasonic Keyboard, it has that firm typewriter-like response and sound. It’s loud but also relaxing all at the same time.

Should You Buy a Drop Ultrasonic Keyboard?

The Drop Ultrasonic Keyboard doesn’t come cheap, and at $349, it may be a hard sell for those looking for a quick replacement. Instead, it’s a unique keyboard that emphasizes style, design and functionality. I love the customization it offers, which makes it a wonderful tech gift for that special someone you don’t mind shelling out a few bucks on.

Ditch the Cables With the Best Wireless Mouse