Online shopping offers many prime perks and a few downfalls — one of them being you’re unable to hold the product in your hands before buying it. Reviews help answer the question of whether or not a product is worth your money, and the best reviews can include helpful insights or even photos and videos. If they’re genuine reviews, that is.

The proliferation of fake reviews is one reason that product review websites like SPY.com are growing so quickly.

But how can you tell if Amazon reviews are real or fake? Fake Amazon reviews have become increasingly common since retailers started exchanging free stuff for positive word of mouth. In July 2022, Amazon filed a lawsuit in Seattle’s King County Superior Court against more than 10,000 Facebook groups it says churn out fake reviews.

It’s one of the most manipulative versions of false advertising because it appears that the reviews are coming from real people. Solicited and fake reviews on Amazon are big business. A quick Google search reveals dozens of companies advertising to “boost” Amazon reviews. 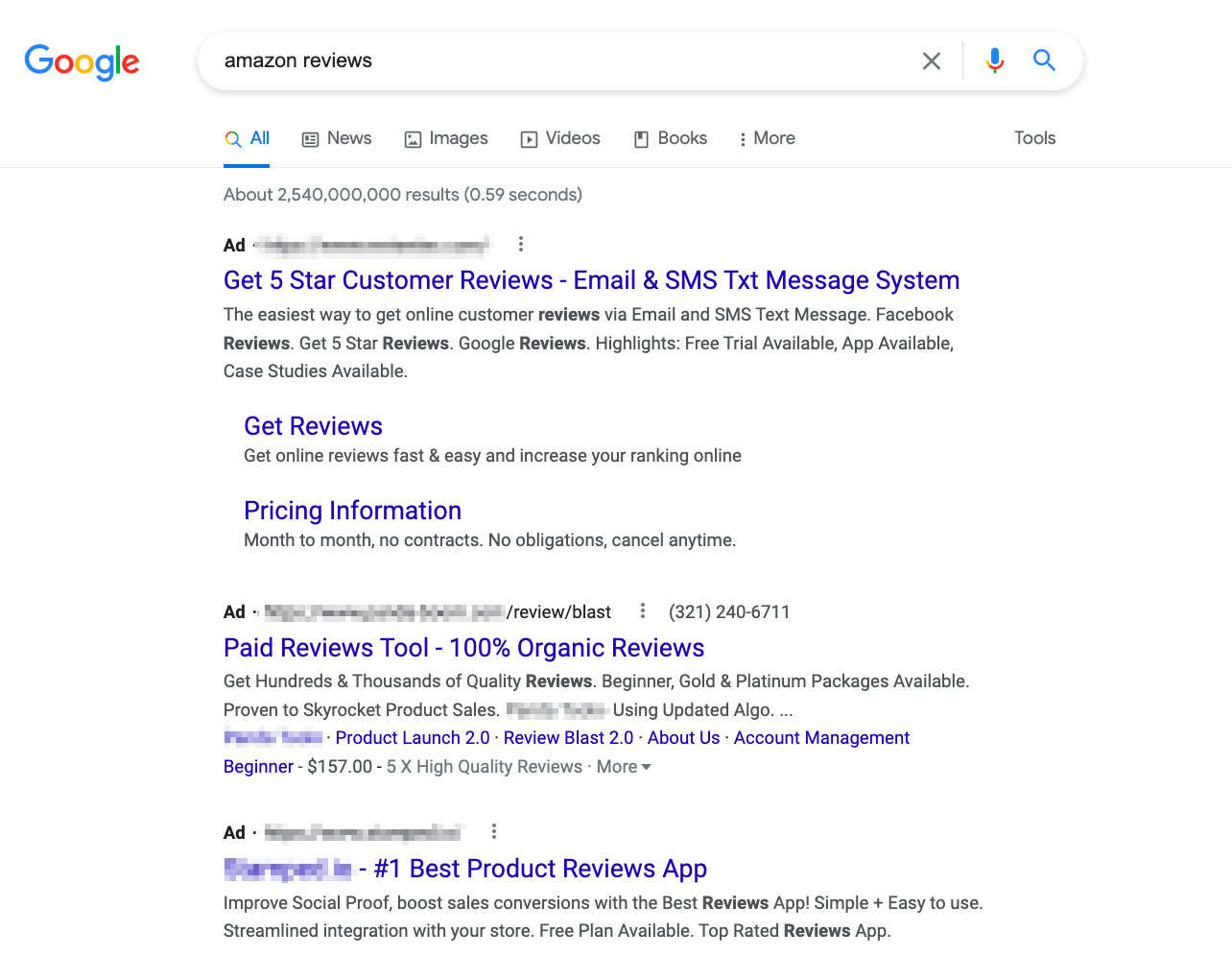 So how can you spot fake reviews?

How Common Are Fake Amazon Reviews?

We’re dismayed to report that fake Amazon reviews are more common than you may think. A 2019 study by ReviewMeta reported a spike in reviews from unverified purchasers (buyers missing the “Verified Purchaser” badge). Of the 1.8 million unverified reviews posted in March 2019, 99.6% were five stars.

The site, a metrics tool for evaluating the authenticity of Amazon reviews, reports the “reviews are mostly for cheap, off-brand electronics products, and seem to be pushing them onto the first page for popular searches like ‘iPhone charger.'”

The study also notes that these fake reviews aren’t for products listed deep in the bowels of Amazon’s search results but are sometimes right at the top of Amazon search results.

To pinpoint the best strategies for avoiding fake reviews, we consulted SPY’s new Reviews Editor, Anthony Mastracci. He’s been working in the product review and marketing space for years and has some excellent advice for shoppers wary of whether or not reviews are real.

“I can tell you that word-of-mouth is still, in 2022, the most ROI-positive form of marketing. Online, that can take the form of reviews. If there’s more buzz on a product from a new brand as opposed to a similar product from an established brand, not only will it rank better on Amazon, but people will start to notice and may want to try the new brand’s product for themselves to ‘keep up with the Joneses,'” said Mastracci.

“By boosting positive reviews, new brands can supercharge their ‘word of mouth’ efforts without having to spend those start-up ad dollars.”

There’s big money in high product ratings on Amazon. According to an analysis done by Pattern, an e-commerce consulting company, increasing a product’s average star rating on Amazon by one star can increase sales by 26%. According to Fakespot, a Chrome extension for detecting fraudulent reviews, 42% of Amazon’s 720 million reviews scanned in 2020 were fake.

Where Do Fake Amazon Reviews Come From?

How are fake Amazon reviews solicited? They mostly occur with products in the $15–$40 range, for simple household objects consumers don’t expect to last forever. Typically, Facebook groups or Twitter accounts are set up with a name that advertises free merch in exchange for a fake five-star review.

Amazon has struggled to combat fake reviews for years, but it took its largest action against them to date this past summer after intense pressure from the Federal Trade Commission, suing the administrators of more than 11,000 Facebook groups aimed at recruiting people for fake Amazon reviews. The problem is dire, and Amazon knows it.

A recent study by the consultant group the Behaviouralist calculates that fake reviews can cost shoppers up to 12 cents for every dollar they spend due to cheap products wearing out over time and requiring replacement. The company has said it has over 12,000 employees dedicated to combating fake reviews stemming from Facebook, Twitter and elsewhere. In 2020 alone, it took down over 200 million reviews suspected of being fake by AI technologies and Amazon employees.

However, the problem is far from solved, as up to 30 million reviews are posted on Amazon weekly, some of which are counterfeit. It’s up to consumers to have the media literacy and digital savvy to spot them and avoid products flooded with counterfeit testimonials.

Does a fake review guarantee a product is not worth your time? Not necessarily, but if reviews are your primary guidance when shopping online, you’ll want to ensure the ones you’re counting on are legit. Here are a few tips on how to do that.

What Is Amazon Doing About It?

An Amazon spokesperson shed some light on how the retailer is responding to the threat of fake reviews on their site, as well as what they’ve done so far. The e-commerce giant says that it’s getting better at stopping fake reviews before they impact customers.

“We want Amazon customers to shop with confidence knowing that the reviews they see are authentic and trustworthy. We have clear policies that prohibit reviews abuse, and we suspend, ban, and take legal action against those who violate these policies.”

They went on to say, “We aim to prevent fake reviews from ever appearing in our store and have stopped millions of suspected fake reviews before they were seen by a customer. Each review is analyzed before publication by our skilled investigators using sophisticated industry-leading tools. In addition, we continue to monitor all existing reviews for signs of abuse and quickly act if we find an issue.”

How to Spot Fake Amazon Reviews When Shopping Online

“TLDR — every single review has the potential to be complete BS. From stuffing the five stars to throwing stones at your competitor with ones,” said Mastracci.

“I consider fake (positive) reviews to be reviews that have been paid for that come in a spreadsheet and are posted over time. They can be incredibly difficult to spot,” Mastracci added. “Conversely, there can also be fake negative reviews, but typically, a company can trace whether or not the reviewer actually purchased something and then hide it or delete the review.”

According to Mastracci, many fake positive reviews follow the same rough format:

“However, professionals who understand how to differentiate these bulk reviews just enough to make them look inconspicuous stand to go unnoticed. Maybe throw in a four-star review with a ‘problem’ with the product and explain how the company’s customer service was easy to work with and solved their problem quickly. Those could also be legitimate, but you’ll feel in your gut when they’re real,” said Mastracci. 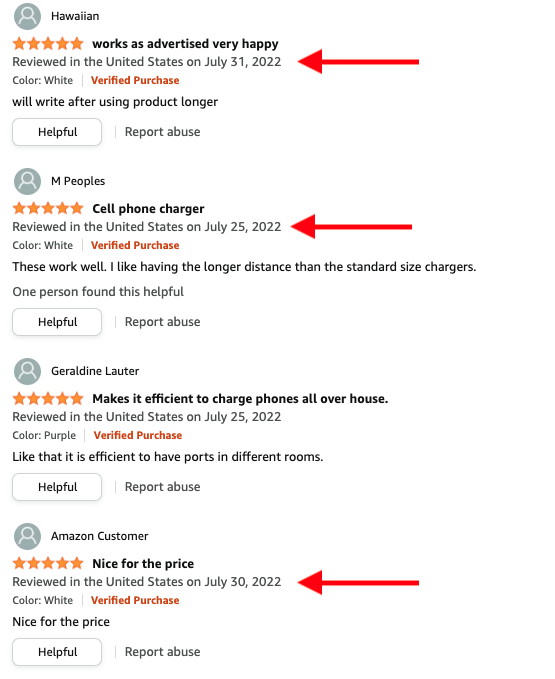 Within the screenshot above, you can see all of the reviews were posted within a few days of each other, all five-star and all of them short with minimal description. Note that all of the dates fall within the range of July 25-30, 2022. We can’t verify that these reviews are 100% fake, but they match the profile of fake Amazon reviews we recommend you watch out for. If a product has a lot of five-star reviews and they look like this, you may want to search for a more trustworthy brand elsewhere.

We should note that a review with a “Verified Purchase” badge doesn’t guarantee it’s trustworthy. Many fake review solicitors will reimburse review writers for a purchased product to add authenticity to their fake reviews.

Where Can You Find Legitimate Reviews?

So are Amazon reviews totally untrustworthy? Not at all. In fact, our editors will sometimes consider Amazon reviews when researching products, and often highly reviewed products on Amazon really do correspond with quality. (Here are some examples.) Generally, volume can also be an indicator that positive reviews reflect genuine word of mouth, and we believe products with more than 15,000 reviews can generally be trusted.

However, we also recommend looking beyond Amazon when researching products.

Sites like SPY offer a wide range of reviews with detailed testimony, product comparisons and original photos so you can see how a product looks in our homes or on our bodies.

Here are a few review round-ups worth checking out, and we’re constantly adding to our repertoire of tested products:

You can find more information about how we test and review products here on our site.

On Amazon, Mastracci recommends looking at 3-star reviews, as they tend to have the most trustworthy information.

“For legitimate reviews, unfortunately, most three-star and below are a safe bet. In my experience, customers who are satisfied with a product won’t take the time to leave a review unless they’re incentivized, or it’s convenient,” said Mastracci. “It’s because when the customer’s expectations are met, that’s the end of the transaction. Only when something goes awry does anybody feel the need to speak up.”

Often, you’ll find the most honest and helpful reviews in the 3-star section on Amazon

If You See Fake Amazon Reviews On a Product, Does That Mean You Shouldn’t Buy It?

We asked Mastracci if a product with many fake reviews means you shouldn’t buy it.

“Absolutely not. Sometimes being the newcomer in an extremely competitive product market, especially if entering as a start-up with limited funding, can be devastatingly difficult. If a brand knows their product is incredible, and word-of-mouth marketing, i.e., a forum of positive reviews, is the most cost-efficient way of getting eyeballs on their product and brand, then they may choose to do that in the beginning.”

He went on to say, “Is that unethical? Yeah, probably. But if you ended up purchasing that product and were completely satisfied with it, is it still bad? Would you have even considered buying their product if you didn’t see ‘others’ who were also satisfied?”

He ended with advice that we follow as much as possible as professional product reviewers: “Pro tip: If you think it’s for you based on the product specs, check out the return policy first, then try it and buy it.”

The 5 Best Smart Scales of 2022, Tested and Reviewed

Hip-Hop Turns 50. The Grammys Celebrate the Milestone Despite Its Complicated History With the Genre