Over three decades have passed since the original Super Mario Bros. invaded the living rooms of gamers everywhere, becoming an international phenomenon. And while Mario’s age might finally match his middle-aged appearance, the games themselves are no less fun to play than they were in the ‘80s and ‘90s, which is why the newly revealed Game & Watch: Super Mario Bros. handheld will be the perfect way to revisit the brilliance of the game that transformed the industry as we know it.

Nintendo cut no corners with the Game & Watch: Super Mario Bros handheld, giving it a full-color display, physical D-pad and two buttons to ensure the game plays just like you remember it. To sweeten the deal, you’ll also be able to play Super Mario Bros: the Lost Levels (which is the real Super Mario Bros. 2), along with Nintendo’s original Game and Watch title, Ball, which has been updated with Mario-specific visuals. 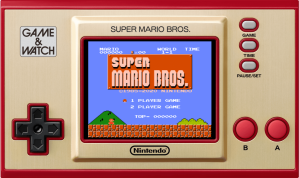 While the 8-bit version of Super Mario Bros. was never part of Nintendo’s original Game and Watch lineup — a much more rudimentary LCD interpretation of the game was used in its place — combining the two franchises here will certainly tug at the nostalgia heartstrings of any ‘80s baby who had dreams of playing the proper version of Mario on the go.

At $49.99, this isn’t the most cost-effective way to play the game if you already own a Nintendo Switch (it’s free with a Nintendo Switch Online subscription). For everyone else, however, the Game & Watch: Super Mario Bros handheld will be the quickest and easiest way to hop in a time machine back to 1985 when it drops on November 13.

But this wasn’t the only big reveal coming from the Mario universe. Nintendo is rounding up its biggest and best 3D Mario games — Super Mario 64, Super Mario Sunshine, and Super Mario Galaxy — and releasing them for the Switch as Super Mario 3D All-Stars.

While Super Mario 64 has seen various re-releases over the years, the Sunshine and Galaxy entries have not been released on any other platform since they appeared on the Gamecube and Wii in 2002 and 2007, respectively. For anyone who missed these games when they first dropped, now is a perfect time to get familiar with these masterpieces.

Super Mario 3D All-Stars will be available on September 18 for $59.99, but strangely, Nintendo says its a limited-time release and only plans to sell the game until March 31, 2021. We’ll update this post once the game becomes available so that you can add it to your own personal library of the best Nintendo Switch games.

Build Your Own Game Console With the LEGO Nintendo Entertainment System