Google I/O has always been heavy with software and developer news, but this year’s annual event was surprisingly rich with hardware-related announcements. We were already salivating over the announcements of the Pixel Buds Pro and Pixel 6a, both of which are coming out soon, but Google saved one of the biggest surprises for the end, with a peek into the future.

That sneak peek into the future, however, brings back memories of Google Glass because the company’s next project could finally make augmented reality a technological revolution — much like how smartphones reshaped everything. There has been a lot of buzz around virtual, augmented and mixed realities, but despite the efforts from companies like Meta and HTC, both of which have their own respective virtual reality systems, consumer adoption hasn’t reached that critical level.

Google may change that trajectory.

Even though we didn’t see an actual pair of AR glasses, Google instead showed a video of what looked like a pair of AR glasses that could translate languages in real-time. Google Translate is one of the company’s core services, offering users conveniences such as live language translation in apps and even translating in real-time with a Google Assistant smart display.

This pair of AR glasses takes things to the next level because it’ll enable the person wearing them to see the translation in real-time. The video showed how augmented reality technology can display the translation through the glasses so that your attention isn’t taken away from the person you’re speaking to.

It could very well break the language barrier, untethering us from how we’d normally use our smartphones to translate. Even though Google’s video demonstration didn’t go into more detail on what else it could do, we would suspect that these AR glasses will come with integrated speakers — much like the open audio technology used by many smart Bluetooth sunglasses on the market right now. Just imagine not only being able to see the translation in real-time, but also hearing it as well through the glasses. 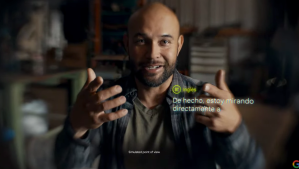 While companies like Meta (Facebook) have focused their efforts on bringing users to a complete virtual reality world with the Metaverse, Google’s approach aims to bring some of those virtual elements to the natural world. That’s exactly what augmented reality is all about, enhancing our natural world with digital elements.

There are a lot of practical applications at stake here which could make these fully realized AR glasses a game-changer. No one has really been able to sell consumers on the benefits of augmented reality, but if Google’s teaser is any indication, that next technological revolution may be here sooner than we think. We’re all excited about it, but Google didn’t go into any detail about whether or not this project will yield an actual product.

The Best Gaming Laptops You Can Buy in 2022