SPY published an article a couple of years back about Android TV and why we should all become familiar with it. Our foreshadowing of the Android TV OS has come to fruition with the release of Google TV, which is quickly gaining popularity. Google TV has an app, connects multiple devices through your Google account, and will be the user interface on many Android TVs coming in 2022. Not to mention the latest Google Chromecast is equipped with Google TV.

But how does Google TV differ from Android TV? And is Google TV the wave of the future for Android OS users?

In the same way that your computer uses an operating system (such as Windows), smart TVs also need an operating system, and Google TV and Android TV are two popular options. Amazon Fire TV and Roku TV are popular alternatives, and companies like Samsung and LG have their own OS software for smart TVs.

If you’re buying a budget TV in 2022, then there’s a good chance that it’s powered by either Google TV or Android TV. To understand the difference, read on.

What Is Google TV? 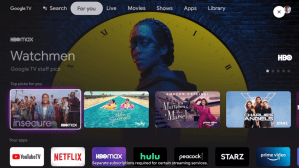 With Google TV, content is king. Google TV serves as sort of a curator for all your favorite content. The shows you watch most from the streaming services you subscribe to populate on the home screen. So, instead of clicking on Hulu, waiting for the app to open and then wading through the content, you get a snapshot of it from the Google TV home screen. This makes accessing your favorite shows, and having them all in one place — or on a single screen rather – possible and more convenient.

Google TV is essentially a replacement — no, rather a rebrand of Android TV. Both function similarly, but more like an upgraded version. Think of it like finally upgrading from a Google Pixel 4 to a Pixel 6 smartphone — they both operate in a similar fashion, but the upgraded one is more streamlined with better features and more convenient.

What Is Android TV? 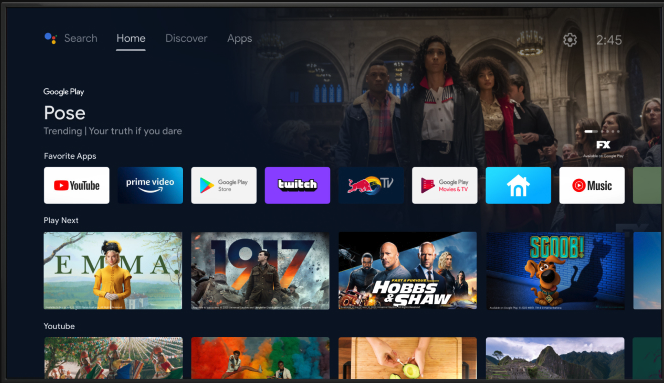 Android TV was launched in 2014, but didn’t really gain a foothold until a redesign in 2017 that focused on the streaming experience. The top row of the home screen would display all of your apps and provide recommendations from within each app. This essentially would allow you to search for content inside of an app without actually opening the app.

In the later version of Android TV — post 2017 — Google Assistant was baked in, so you could use voice commands to help you navigate your content in Android TV as well as use commands to  control other Google connected smart devices throughout your home.

Now that both Android operating systems are in the market at the same time, we can see how the two OS stack up against one another.

Arguably the biggest difference between Google TV and Android TV is the user interface. As we mentioned above, content is king in Google TV. Google utilizes all of its smart AI prowess to learn your viewing habits and to display recommended shows for you on the “For You” tab which is the default tab when you open up the OS. This helps you get to the shows and live TV you want to watch (we’ll get to that in a moment) in a more streamlined manner.

If you’re familiar with the “My List” feature in Netflix, Google TV has a similar functioning feature that you can find under the “Library” tab. From here, you can add shows that you want to add to your docket to watch. But the big difference between how the Netflix and Google TV feature operates is the interconnectivity between all of your Google devices. You don’t have to be on your Google TV to add shows to your library. Since you’re logged into your Google account, you can add shows from your smartphone or computer as well, and they will appear when you open up the tab on your TV. Pretty convenient, huh.

With Android TV, your app selection was the centerpiece of the OS. As we mentioned above, when you had an app highlighted, you could see the available content inside of the app without actually clicking on it. Now, there is also a “Discovery” tab with tailored content, but it’s not as personalized as Googles, and isn’t the default tab when you fire up the OS. 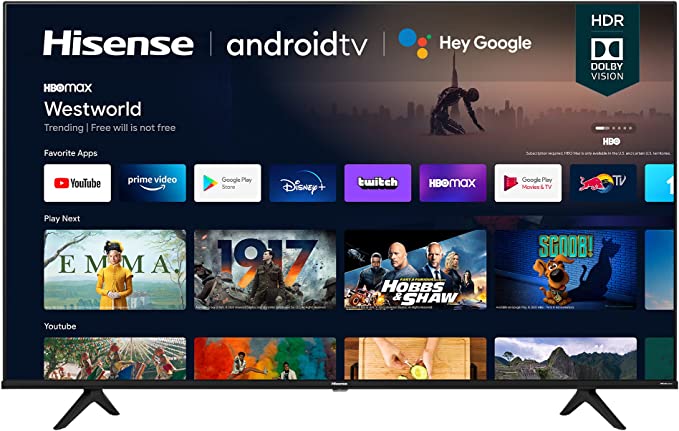 We alluded to this earlier, but Google TV provides personalization with your content. And much like Netflix or Hulu, Google TV also has individual user profiles. This way, if you’re way into blow s*** up action adventures, but your partner is more of a rom-com fanatic, you can keep the two streams separate thanks to individual accounts. This also keeps your “For You” tab from suggesting content for you that you have absolutely no interest in.

Another major development for Google TV compared to Android TV is live television programming. Like Hulu, Google TV has a tab dedicated to Live TV but also pulls that content into your home screen, so your home screen is a mix of the streaming content and live content that you view the most.

Through Android TV, you can still get live programming, but it would have to be leveraged through a provider like Hulu or FuvoTV (or whatever compatible app is available). There also isn’t an emphasis on live programming like on Google TV with a dedicated tab. 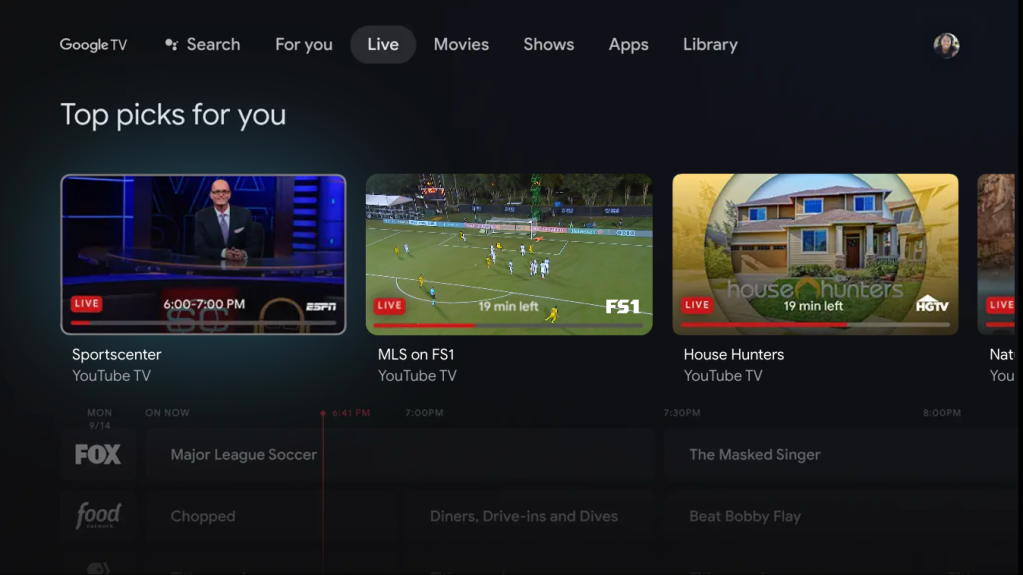 Being able to use an app on your smartphone as a remote control for devices isn’t revolutionary by any means. But the mobile app for Google TV essentially gives you complete power of your OS on the handheld device you’re more familiar with than anything — your phone.

For instance, searching for content is a thousand times easier being able to use your phone’s keyboard instead of using the arrows on your remote control to punch in individual letters on your TV screen. You can even scroll through the content on your phone and it will mirror on your TV.

The other benefit is what we mentioned before is the interconnectivity thanks to your google account. You can quickly search for and find content that you want to watch on your smartphone, click the “watchlist” button and see it appear on your TV’s “watchlist” tab.

Another major difference between Google TV and Android is the flexibility of parental controls. With Google TV, you can set up kids’ profiles that have content filters that will only show them age-appropriate content. Parents can also choose to block specific content they feel is not appropriate for their children.

Android TV also has parent controls, but it affects everyone once parental parameters are set — there is no way to create a kid’s user profile and add controls for only kids. 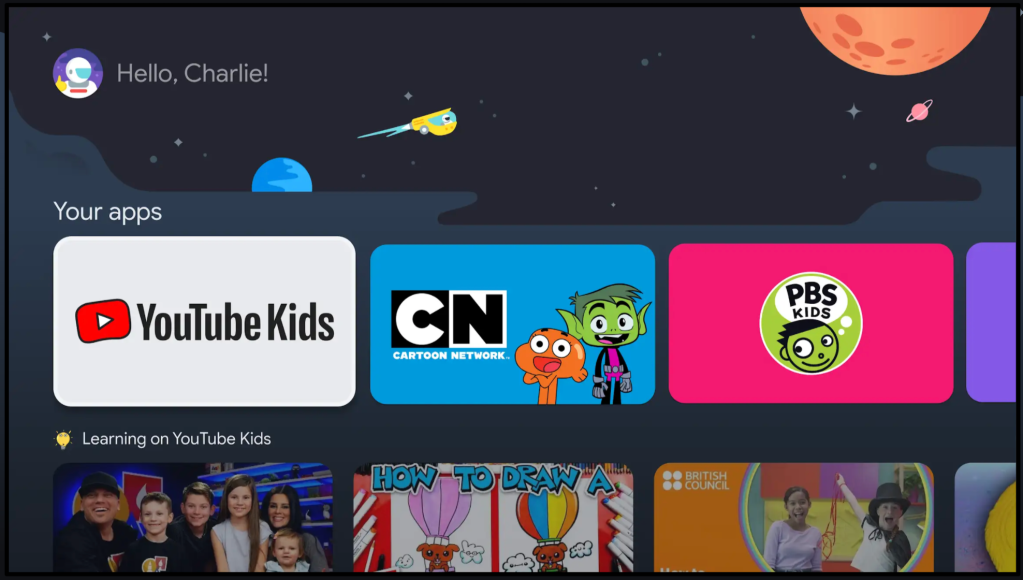 Google TV vs Android TV: Are These TVs Worth Buying

Absolutely. As we mentioned, in the coming years, Google TV will more than likely phase out the Android TV platform. That being said, if you are planning on buying a new TV, don’t hesitate — the Google TV OS is awesome. It organizes content in a fluid and intuitive way and the connectivity between all of your devices with your Google account makes organization and adding content to your watchlist a breeze. We mentioned a couple years ago Android TV is here to stay. Now with Google TV, it’s evolved into one of the better TV streaming and navigation platforms available.

what's the difference between led, oled, and qled displays? what to know before buying a new tv