Despite the fact 4K TVs are just now becoming commonplace, that’s not stopping manufacturers from thinking about what’s next. For many, that means taking the next big step in 8K televisions. Hisense‘s U800GR 75-inch Roku TV is the brand’s foray into a set capable of rendering an image double the resolution of 4K. 8K is still pretty new as a technology, so is it actually worth upgrading to? To find out, Hisense sent a U800GR unit for us to review. Our thoughts below.

When it comes to TVs, first impressions aren’t everything, but they certainly make an impact. And, man, does the U800GR make a splash right out of the box. The biggest set I’ve ever had in my space, the U800GR is a massive beast at a startling 75 inches. All in, the box and the TV itself weigh about 150 pounds, so you’ll definitely need a hand (or two) moving it into your space. From there, setup moves pretty quickly; unboxing and positioning the TV didn’t take long (about 20 minutes), while the setup of the Roku OS (including connecting it to the Internet, downloading apps, and signing into various streaming apps) took about another 30 minutes. I also decided to fully charge the rechargeable Roku remote, which took about an hour or two, so I plugged that in while I binged episodes of Netflix’s Formula 1: Drive to Survive. I didn’t see a noticeable upgrade in picture quality right away, but Drive to Survive isn’t optimized for 4K.

From that point forward, I prioritized 4K streaming content specifically, starting with Encanto. While Disney+ doesn’t currently offer native 8K streaming content, the upscaled 4K to 8K experience of Encanto was, frankly, fantastic. Disney’s latest animated feature felt even more alive than usual, with the hues of the already colorful world seemingly exploding off the screen thanks to the wonderful HDR. 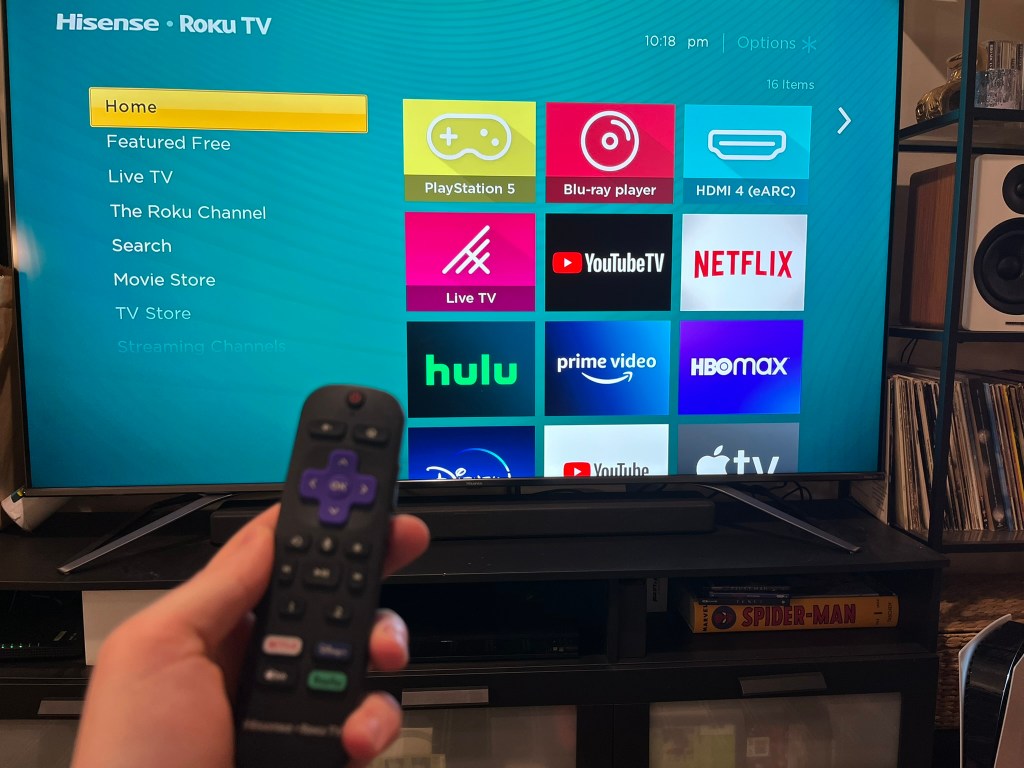 However, the most impressive viewing experience I had was when I tossed in my 4K copy of Spider-Man: Into the Spider-Verse. Attentive viewers of the film may have noticed that the art style is designed so that the backgrounds evoke feelings of the old school Ben Day CMYK printing style. What I didn’t realize until I revisited Spider-Verse in upscaled 8K was that the actual character models themselves are designed this way too. It’s an incredible bit of detailing I certainly didn’t catch in the theater during my first two viewings (one of which was in IMAX) and one I likely wouldn’t have seen were it not for the U8000GR with its massively improved resolution and HDR. Watching Spider-Verse this way felt like I was experiencing the movie again for the first time, despite having seen it a handful of times already, and it made me appreciate the craft on display even more.

My viewing of my First Man 4K wasn’t quite the transcendent experience as Spider-Verse turned out to be, but impressive nonetheless. Director Damien Chazelle shot most of the movie on film, which already provides a greater depth than what you’d get with digital. A few wide, establishing shots (mostly nature settings) took my breath away. Because of that great local dimming, a moonlight-soaked street really popped, as did the bleak darkness of space. The viewing was much more subtle but still rewarding.

Gaming, on the other hand, was pretty consistent in its wonderfulness. Ratchet & Clank: Rift Apart (which remains the gold standard to beat when it comes to a showcase title) felt more vivid, sharp, and colorful than expected. Likewise, with the dangerously juvenile world of Fortnite, the clarity of the Island took a step up. I’m also currently working my way through Sony’s Spider-Man game; I found myself stopping to admire the incredibly rendered New York City more than a handful of times. The U800GR uses its HDMI 2.1 to leverage a very high frame rate and FreeSnyc to reduce screen tearing. Also, the TV felt like I was finally getting the most of the PlayStation 5’s HDR tech. 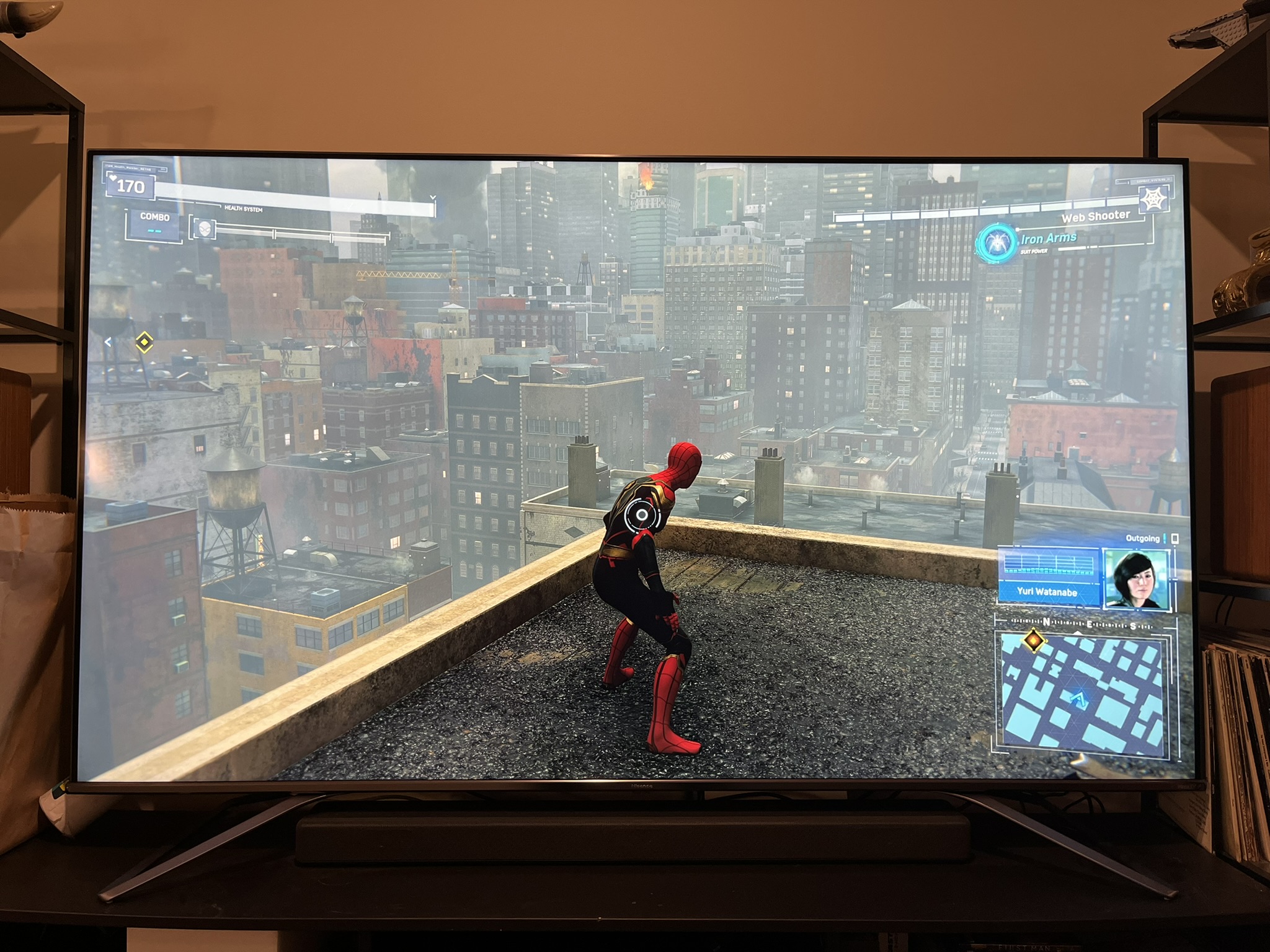 One other note: I didn’t spend extensive time with the Roku Remote’s voice control, but the few times I did use it, it worked well. I don’t typically default to voice control for TV because when I sit down to turn it on, I’m normally pretty locked into whatever I’m going to do, i.e., I’m here to either game or watch a specific show or movie. I’d probably get more out of it if I were just generally browsing, but that runs a little counter to my viewing habits. Additionally, the Roku OS interface should feel pretty typical to those who have used a Roku in the past.

I have a feeling the biggest drawbacks for potential buyers are going to be two-fold: the price and the lack of true 8K content. Let’s start with the former. The list price on the unit clocks in at $2,700. That’s … a lot. The price point easily puts this TV on the decidedly higher end of things. While it’s currently $2,400 on Amazon, that’s still higher than most 75-inch 4K televisions. I think it’d be more of an easy sell if 8K content was readily available outside of photos and selected YouTube videos.

Additionally, I did see some input lag on the 8K output when I was gaming. There’s not enough to be concerned about, but competitive gamers may want to drop it down to the 4K input to ensure they don’t miss a shot in Warzone or Fortnite. A slight bit of lag wasn’t an issue for me in Spider-Man, but it’s worth mentioning all the same.

Buying the U800GR is an investment, one that will undoubtedly pay a lot more dividends in the future. But for now, there’s still plenty to get excited about. Gamers and cinephiles will find a lot to love here, as I can definitively say it will transform their gaming and movie-watching experience thanks to the impressive upscaling. Those features should be enough to tide you over until the promise of 8K really comes to fruition. 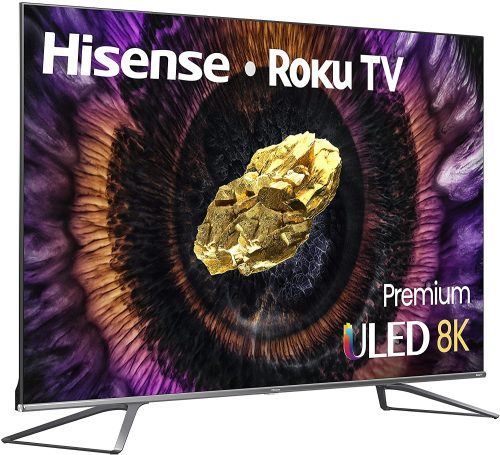 Review: Hisense’s U7G ULED 65-Inch 4K Smart TV Is a Must for Gamers