Currently, there are two brands really taking over the instant film camera scene: Polaroid models and the Fujifilm Instax Mini. Both brands have been around for quite some time, but most people equate the classic instant film camera with Polaroid. With that being said, you might be surprised to know that the Fujifilm Instax Mini, in recent years, has become much more popular. This is likely due to the array of candy-colored bodies by the brand and given that the camera itself tends to be less expensive. Nonetheless, here we will be chatting about both Polaroid and Fujifilm Instax Mini instant camera film types, given you’re going to need different sizes depending on which you own.

Whether you’re dusting off an old Polaroid found in a box in your garage or testing out your photography skills with a brand new Fujifilm Instax Mini, check out the best instant camera film for your make and model below.

Currently, Polaroid film exists solely in four forms, depending on which kind of Polaroid you own. Available instant film types for Polaroid are i-Type film, 600 film, SX-70 film and 8×10 film. Considering i-Type and 600 film options are the most popular in today’s modern day and age, we’re going to put our focus on those two types.

If you have an interest in purchasing SX-70 or 8×10 film, you can find options for both right on Polaroid’s site.

Looking for nothing other than that classic Polaroid look on your i-Type camera? Look no further, you’ve found what you’ve been searching for. This updated classic instant camera film option will work effortlessly well on your Polaroid i-Type camera. Each photo will be totally rich in color and contrast, and will develop in 15 minutes or less. Remember to shoot using flash in low-light situations! 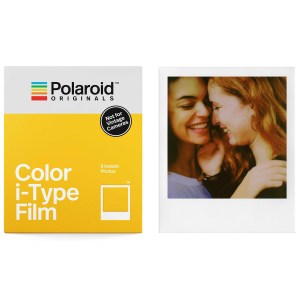 If you’re shooting on an older Polaroid model, you’re going to need this 600 instant color film to get the job done. This film is unpredictable in the best way possible by giving you the best shot you never intended for each and every time. You can use this film on an i-Type camera as well if you choose to do so. 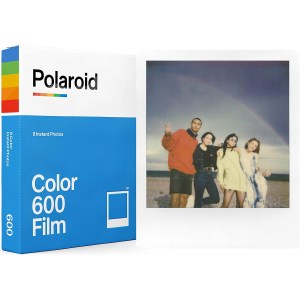 Spice it up with a little added flair to your Polaroid borders by using the Metallic Nights i-Type color film. Each shot will come out with a different colorfully metallic border to bring a bit of pop to your photos. You can also get less shiny, brighter frames with this similar 600 film right on Polaroid’s site. 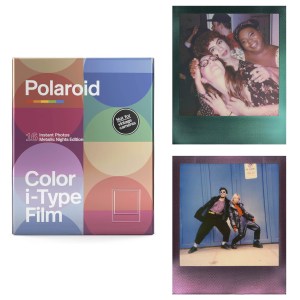 Ditch the white and ditch the colors with a full midnight-black frame to match your favorite color. The frames are totally matte which makes each shot feel grounded and one of a kind. 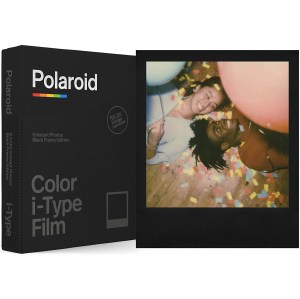 Trying to take it down a notch? Get to it with this contrasty black and white film made specifically for i-Type cameras. It’s a solid way to tone the Polaroid aesthetic down tremendously while still holding true to the medium. 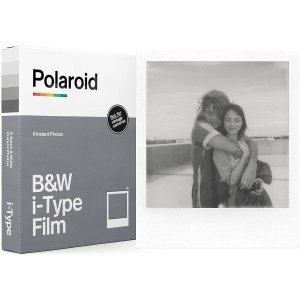 While Polaroid can become a bit more confusing to shop for, Fujifilm is relatively straightforward. Different models don’t require varying instant film options, so you’re set with whatever you choose.

Size-wise, the instant film for Fujifilm Instax Minis is a hell of a lot smaller than anything provided by Polaroid, hence the name. Film for this camera is also a lot cheaper, making this a great option for anyone that’s completely photo-obsessed.

Starting with the most classic, this instant film is the go-to, white-bordered instant film you simply won’t be able to stop using. The pure white borders make each shot look clean and sharp. This pack comes with 50 different shots, too, and given the price, this is really a bang for your buck. 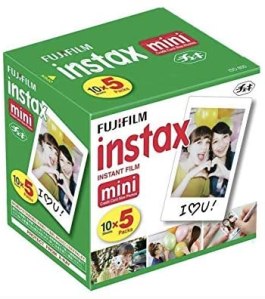 Create a rainbow with this gorgeous instant film option that comes in an array of blended, highly-saturated color combinations. The photos themselves have the same quality as they would with a regular white border, but what puts these outside the box are the wild borders we are kind of obsessed with. 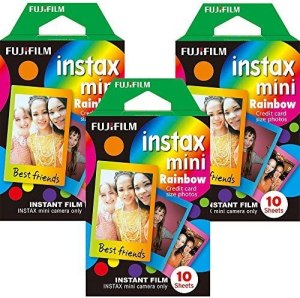 The classic matte black border isn’t something that only exists in the world of Polaroid. Bring your format into a much smaller frame with the all-black instant film made specifically for a Fujifilm Instax Mini. 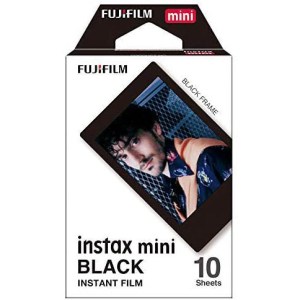 Let’s get monochrome! Black and white film, as mentioned, is a great way to bring your photos into a whole other world. Snag this black and white film for your Fujifilm Instax Mini and get stellar shots with excellent contrast. 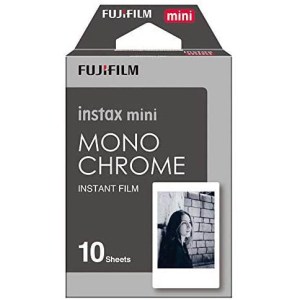 Try out a mixture of some of Fujifilm’s most fun frames with this five-pack bundle. Receive 10 of each style, featuring their airmai, comic, shiny star, stripe and stained glass-themed frames. 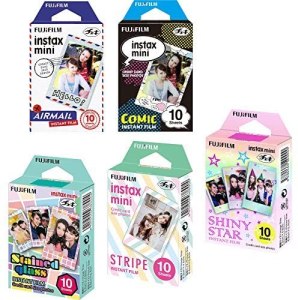