When I was in the seventh grade, I played the clarinet in the band at school. It was exciting to learn how to read music and eventually be able to perform a song in its entirety without my music teacher grimacing in pain at a missed note. But the clarinet isn’t an exciting instrument to play on your own or when jamming with friends. After junior high ended, I added the clarinet to the many items collecting dust in my parents’ basement.

As an adult, I’ve regretted not keeping up my music education and wished that I had simply pivoted towards an instrument that lent itself better to learning songs by contemporary artists. The demands of being an adult typically leave little time for exploring new hobbies and learning new skills, which is why I was excited to receive one of the early editions of the Lumi for review, a small keyboard and app-based program designed to teach people how to play the piano. The Lumi? I can jam with that.

The Lumi was created by the makers of Roli, a line of intuitive soundboards and synthesizers that helps avid musicians and professionals create and record studio-quality beats and mixes from their homes. The Roli is designed for people who already have some musical training and know-how, while the Lumi is for anyone who’s ever wanted to learn to play the piano but has no experience. Literally, none. Can you look at a baby grand, spot its black and white keys, and identify that you are staring at a piano? Then you are musically savvy enough to learn with the Lumi.

The Lumi was first introduced to a wide audience through Kickstarter, where it raised more than $2 million in backing funds. Fans of the TV show Songland may have spotted superstar producer Ryan Tedder using a Lumi in a few episodes, with the Grammy winner and OneRepublic frontman acting as one of the first backers of the Lumi. The company has begun accepting pre-orders ahead of the official launch, with the Lumi set to be delivered to new buyers in December. Timing for Lumi could not be better with people preparing for a long winter indoors as the global pandemic continues. 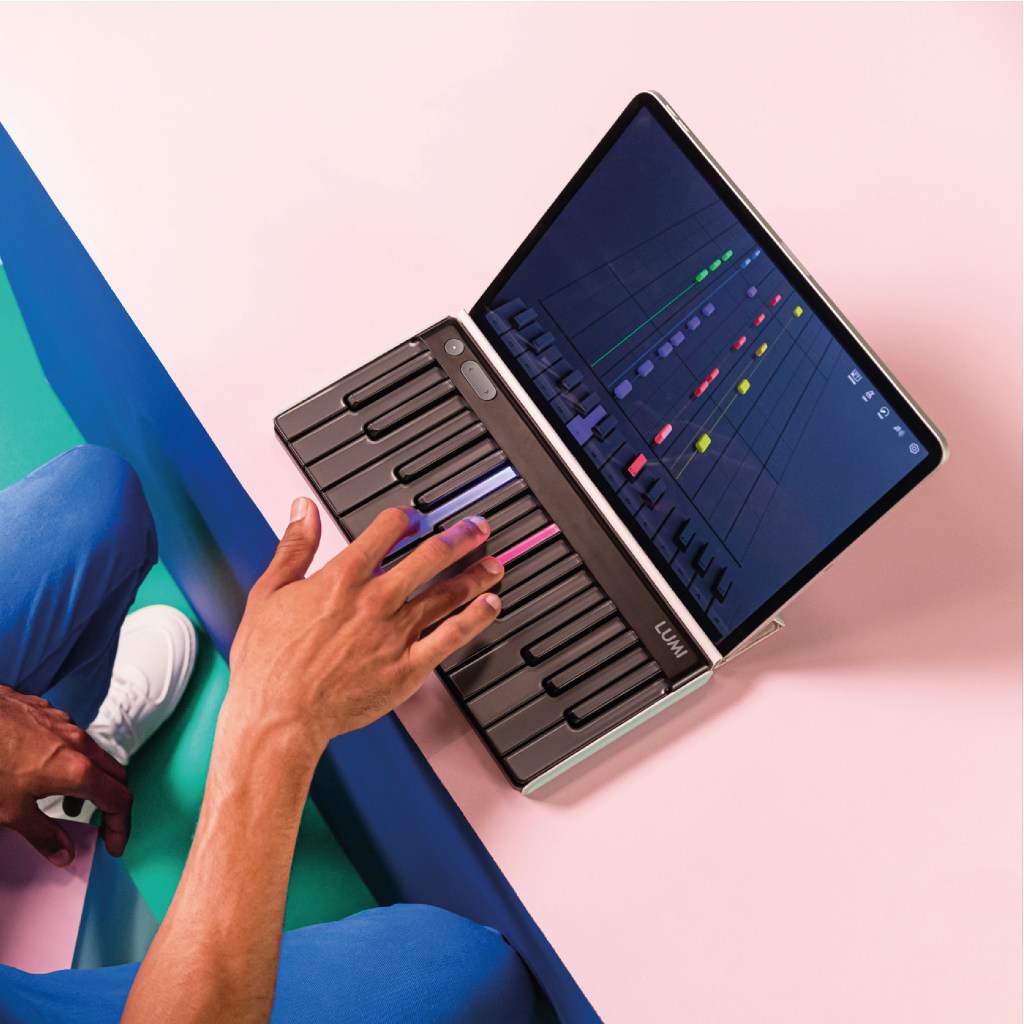 What’s in the Box?

There are two major components to the product. First is the physical. The 24-key Lumi keyboard is lightweight and designed with keys that are slightly smaller than a traditional piano, which makes playing the keyboard more comfortable for the average person (traditional pianos are built for tall men with large hands). Customers will love the bright design of the keyboard, which lights up in accordance with the app and uses colors to help players know which key they should be playing. The Lumi keyboard uses Bluetooth to connect to a smartphone or tablet that has the Lumi app downloaded.

That brings us to the second major component of the product, which is the app. The Lumi app is a comprehensive program broken down into chapters that are designed to take players from “Twinkle Twinkle Little Star” to Mozart. Succinct one to three-minute lessons featuring a team of instructors help players become comfortable with finger placement, learn timing by playing along to a metronome, and understand when and how to hold notes. Players begin by filling in bass lines for famous songs and eventually work their way up to playing complete tracks.

There are two options with the Lumi app. By purchasing the Lumi, customers automatically receive the Lumi Essential app, which includes 40 classic songs, more than 60 interactive lessons, and 72 exercises to help learn chords and scales. Customers can also upgrade to the Lumi Complete, which includes everything in the Lumi Essential and adds hundreds of contemporary songs, more lessons and more exercises. Lumi already has a massive and impressive library of songs to choose from under Lumi Complete, including tracks by Beyonce, Carole King, Ed Sheeran, Norah Jones and hundreds more. The company has promised new lessons and songs to be uploaded monthly once the product officially launches at the end of the year.

Lumi is currently offering a voucher that reduces the annual price of the Lumi Complete from $79 to $29, as well as a free case for the Lumi keyboard and free shipping, saving customers $130 for the package, which comes to $299 plus tax. 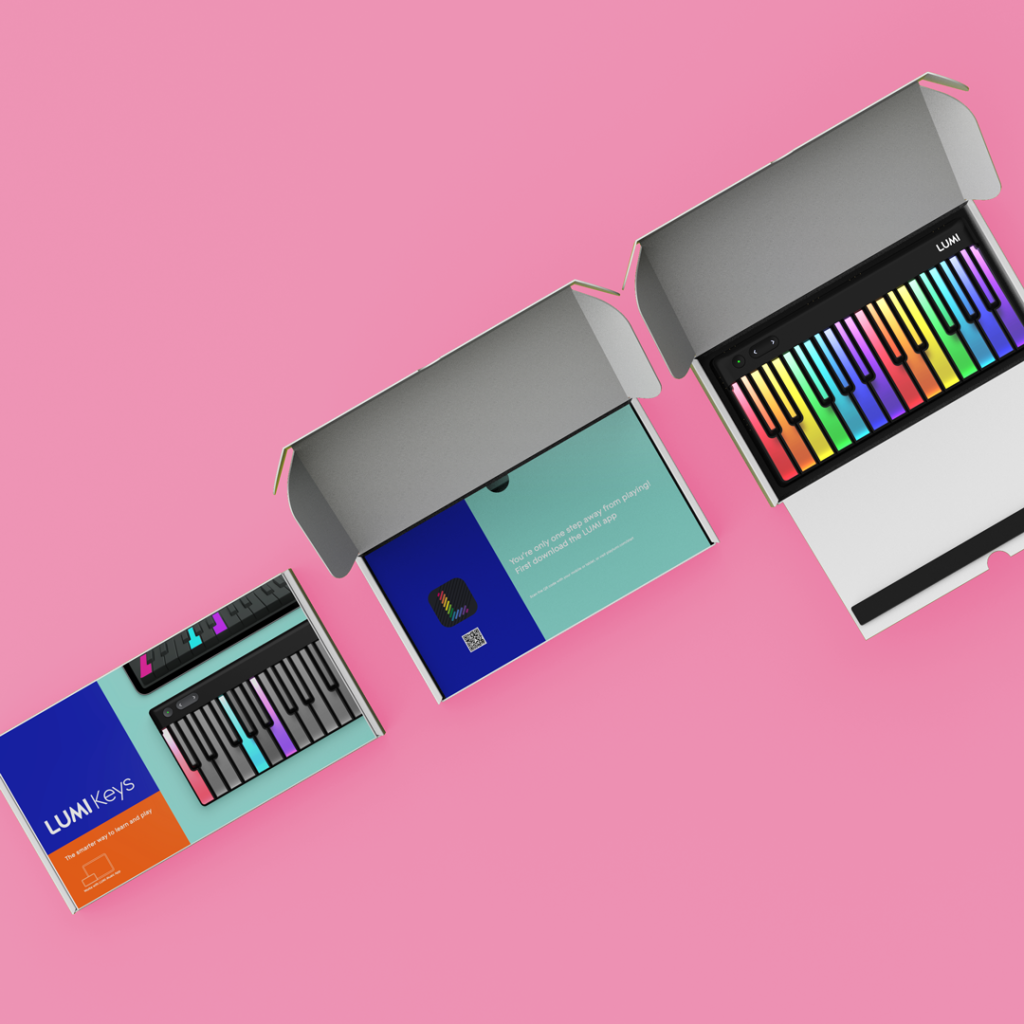 Aesthetically speaking, the Lumi nails it. The keyboard is sleek and compact, while still feeling like a real piano with heavy keys. The bright and colorful RGB lights of the keyboard are not only fun to look at, but they make it easy for players to follow along with the app or play on their own. Using either the box the Lumi arrives in or the snap case that also includes a convenient holder for tablets and smartphones, players can easily take the Lumi on the go.

Both the Lumi keyboard and app are user-friendly, with fast Bluetooth connectivity and a quick launch time for the app. Lessons are easy to follow and the instructors explain hand placement and timing in a way that is simple to grasp. There are several challenges in each chapter that give players time to test their newfound skills and repeat songs until they have perfected the notes. These challenges include scores and have a gaming element that taps into the player’s competitive side. There’s also an opportunity to take a break from the lessons and try out songs with the help of the app. 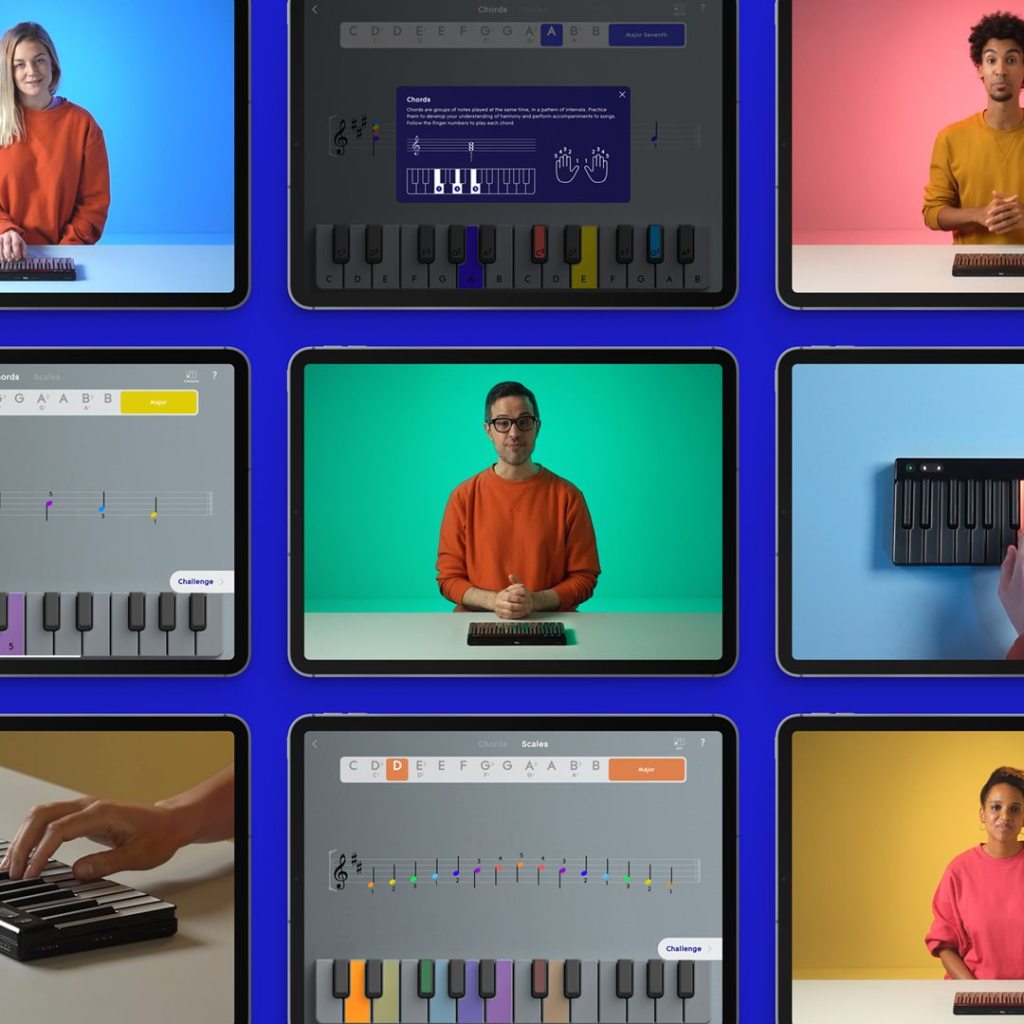 One of our biggest concerns with the Lumi was that we would simply learn how to follow the colors but not actually understand what we were playing or how to take the skills learned on the Lumi and apply them to a traditional keyboard or piano. Thankfully, the app does an excellent job of acting as a piano teacher, breaking down exactly how to understand chords and notes, and eventually read music.

Having access to modern hit songs through the Lumi Complete app makes learning to play an instrument fun. It’s great to gain an understanding of how to play chopsticks, but being able to sit down at a piano and play the latest song by The Weeknd is an excellent way to keep young people and adults engaged.

There are a few issues with the Lumi, some of which are being corrected and some of which users simply must get used to. The first is the size of the keyboard. Customers can purchase a second Lumi keyboard and snap the two units together to make a larger keyboard that is closer in size to an actual piano. Of course, this comes with a major cost and is still not the same size as a traditional piano. Headphones also pose an issue. Players can plug in wired headphones to the Lumi to use their keyboard without distracting those around them, but unfortunately, wireless headphones are not compatible.

Then there’s the app. Our biggest issue with the Lumi as it stands right now is that the app sometimes has slow load times for lessons, which can be frustrating when lessons are only one or two minutes. This causes players to have to frequently wait while each lesson loads. Fewer lessons and longer videos may be one way to fix this. Another issue is that we often found the app to be glitchy and sometimes give an error message at the end of the lesson instead of automatically loading the next lesson or chapter. It is important to note that during the few weeks we tested the Lumi, the app was continually being improved with more lessons and features added. The glitches and errors also occurred at a less frequent rate as time went on. By the time the product has its hard launch in December, it’s likely that these issues with the app will be gone completely.

The Verdict: The Lumi Makes Learning To Play The Piano Fun and Engaging

The Lumi could not arrive at a better time. The ongoing pandemic continues to keep people home and gives them more time to finally tackle a hobby they’ve been wanting to try for years. Likewise, if you’re looking to gift the budding musician in your family a great gift, this is it. Although the Lumi does have an initial sticker shock, it is well worth the investment. Buying a keyboard or piano and attempting to learn on your own or through YouTube videos works for some people, but most will become frustrated and give up before they see any real progress. With the Lumi, customers are investing in their musical education. By learning timing, chords, scales and notes in a way that is fun, interactive, and challenging, customers are much more likely to invest the time necessary to learn how to play an instrument and eventually buy a full-size keyboard or piano that they will use regularly.

We also like that the Lumi is a product the whole family can use. Right now the keyboard and app are rated for ages 13 and above, but the company is working to make the product COPPA-compliant in order to adhere to the Children’s Online Privacy Protection Act and be appropriate for all ages. 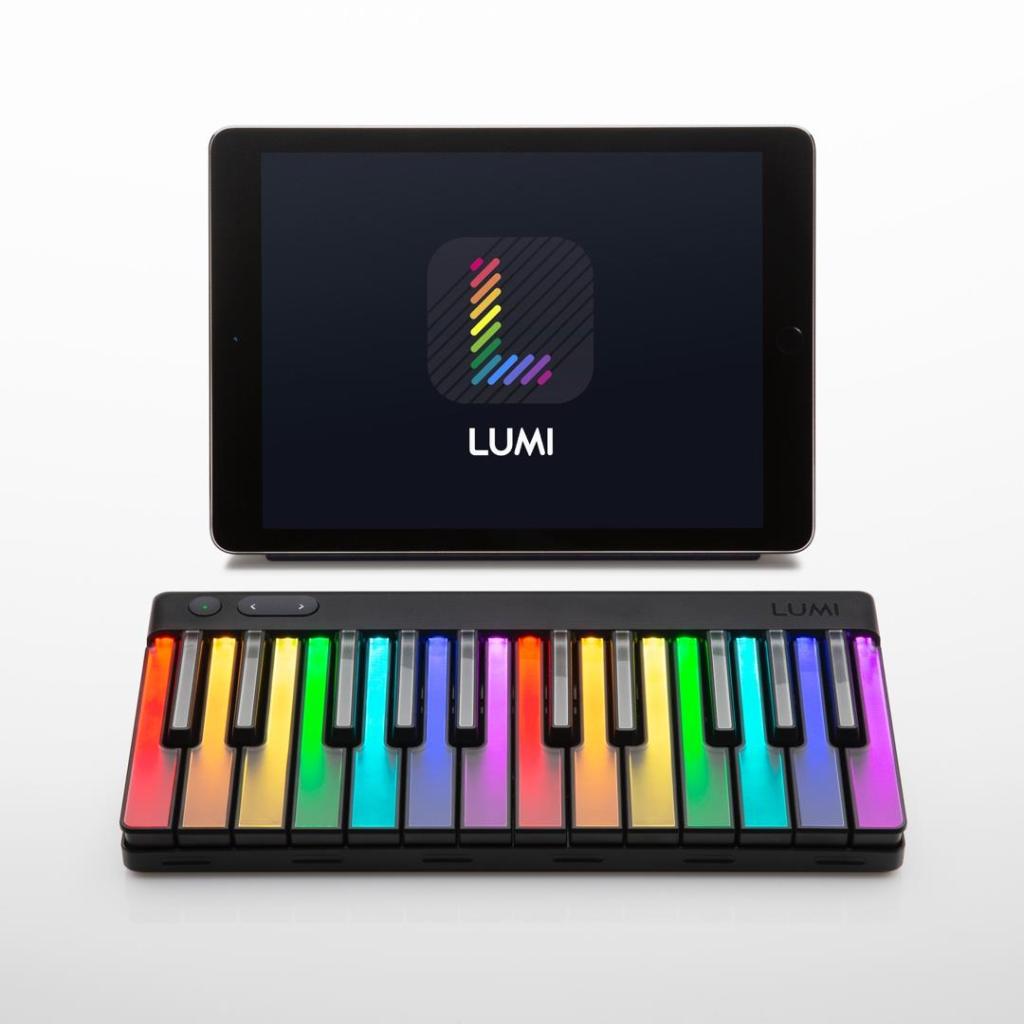