Needing to plug in your new gadget and not finding a free outlet is the adult equivalent of opening up a shiny new toy on Christmas day and realizing you don’t have the batteries necessary to play with it. There may be tears, there will be frustration, and your next move will be to go online and order a surge protector immediately. We suggest ordering one now and saving your sobs for more important matters.

Surge protectors offer additional outlets by plugging into the wall and providing four to 12 extra outlets that can be used for anything from charging your phone to powering all the devices in your entertainment system. They also offer protection from power surges, which can occur multiple times per day and in the case of massive storms, result in expensive electronics being fried … unless you are properly using a surge protector.

What To Look For in a Surge Protector

Make sure your surge protector has enough protection (joules) for the devices being plugged in or else you won’t get the necessary amount of protection to stop your electronics from being fried. The larger or more expensive the electronic, the higher the joule rating needed (around 2,000 joules is your best bet for computers, TVs, etc).

Consider where you will be using your surge protector. Some units are designed to sit flush against walls, which helps to hide them. Opting for a surge protector that is the same color as your furniture, flooring or walls helps to disguise them.

What will you be plugging in? We’ve included surge protectors that work for AC outlets as well as units that include USB ports as well.

How We Picked the Best Surge Protectors

All the options on our list are highly rated by customers and are designed to help make your life easier and less cluttered. We’ve included surge protectors with a variety of protection to help ensure large electronics, like fridges and TVs, are just as protected as small electronics, like phones and tablets.

It’s important to remember that surge protectors don’t last forever. Some may automatically stop working when they no longer offer protection, while others will simply turn into power strips. It’s a good idea to replace your surge protector every few years to ensure your devices are protected.

GE is one of the most trusted companies in the world in a variety of fields, which means that you can depend on them to power your household electronics. This power strip surge protector has six outlets and an extra-long 10-foot cord. The wall plug has a flat design, making it easy to plug in in tight spaces like behind furniture. Each outlet can be twisted to close it, adding an extra safety feature for any outlet that’s not in use. An affordable basic, the GE is available in several cord lengths between two and 20 feet and provides up to 800 joules of protection for small electronics. 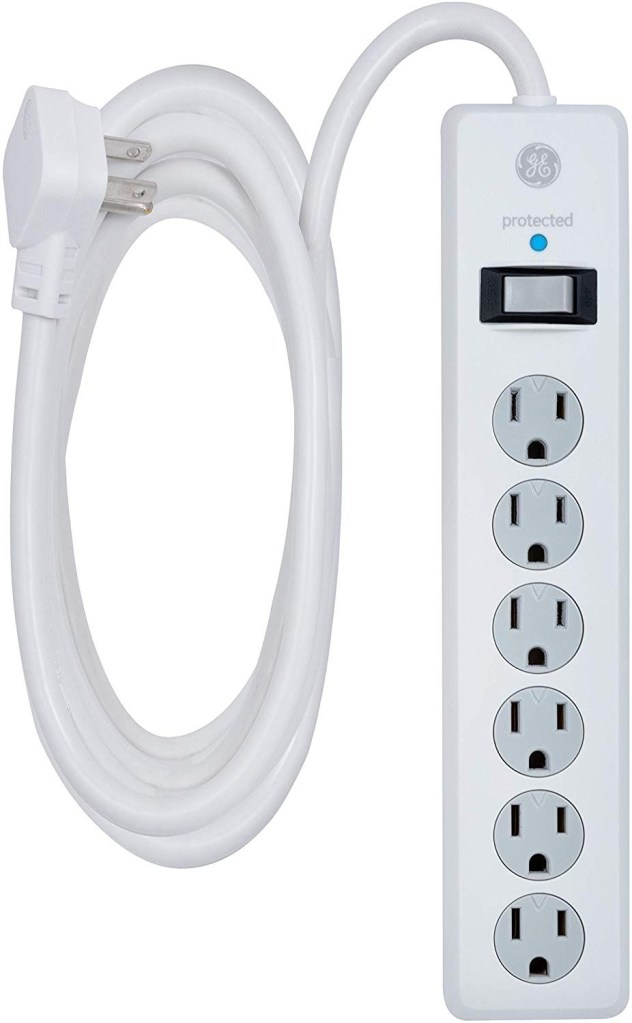 If you’ve got big adapters and cannot lie, this is the power strip for you. The Belkin 12-Outlet Pivot-Plug Power Strip Surge Protector has 12 AC outlets, including eight outlets that pivot outwards, making it easier to fit multiple oversized adapters on the power strip at once. A dedicated phone line protector makes this a great option for offices and ensures that phone lines, including fax lines, remain open even in the event of a power surge. Boasting an impressive 6,000 volts maximum spike voltage, the Belkin is built tough thanks to its damage-resistant housing that protects against impact and rust as well as its heavy-duty 8-foot cord. 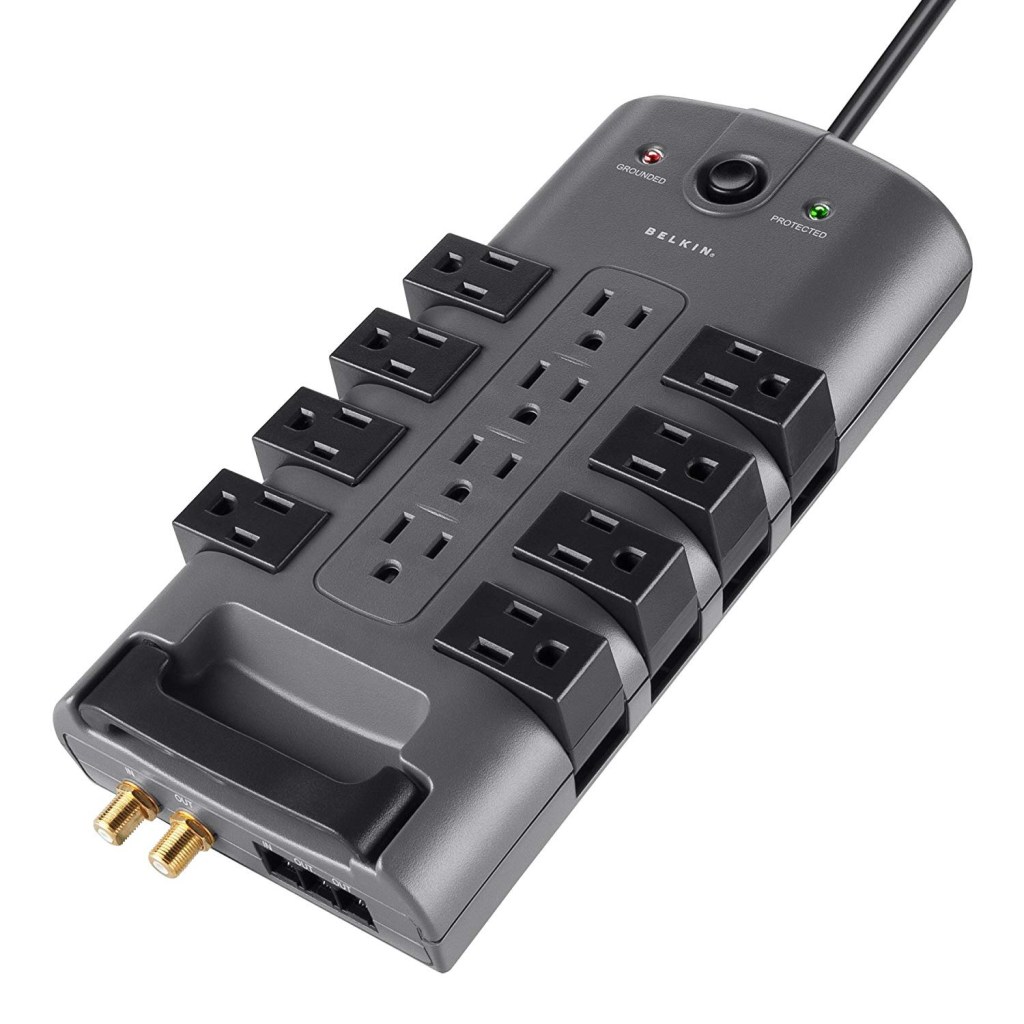 We write about a lot of surge protectors and smart plugs here at SPY, and when we first came across Kasa’s smart power strip, we knew it was something special. Not only does this power strip include six outlets and three USB ports, but it’s also a smart device. That means this gadget combines six smart plugs into a single device, letting you turn an entire room’s worth of electronics into smart devices. In our testing, Kasa makes excellent smart devices, and the brand’s smart plugs are easy to use and set up. 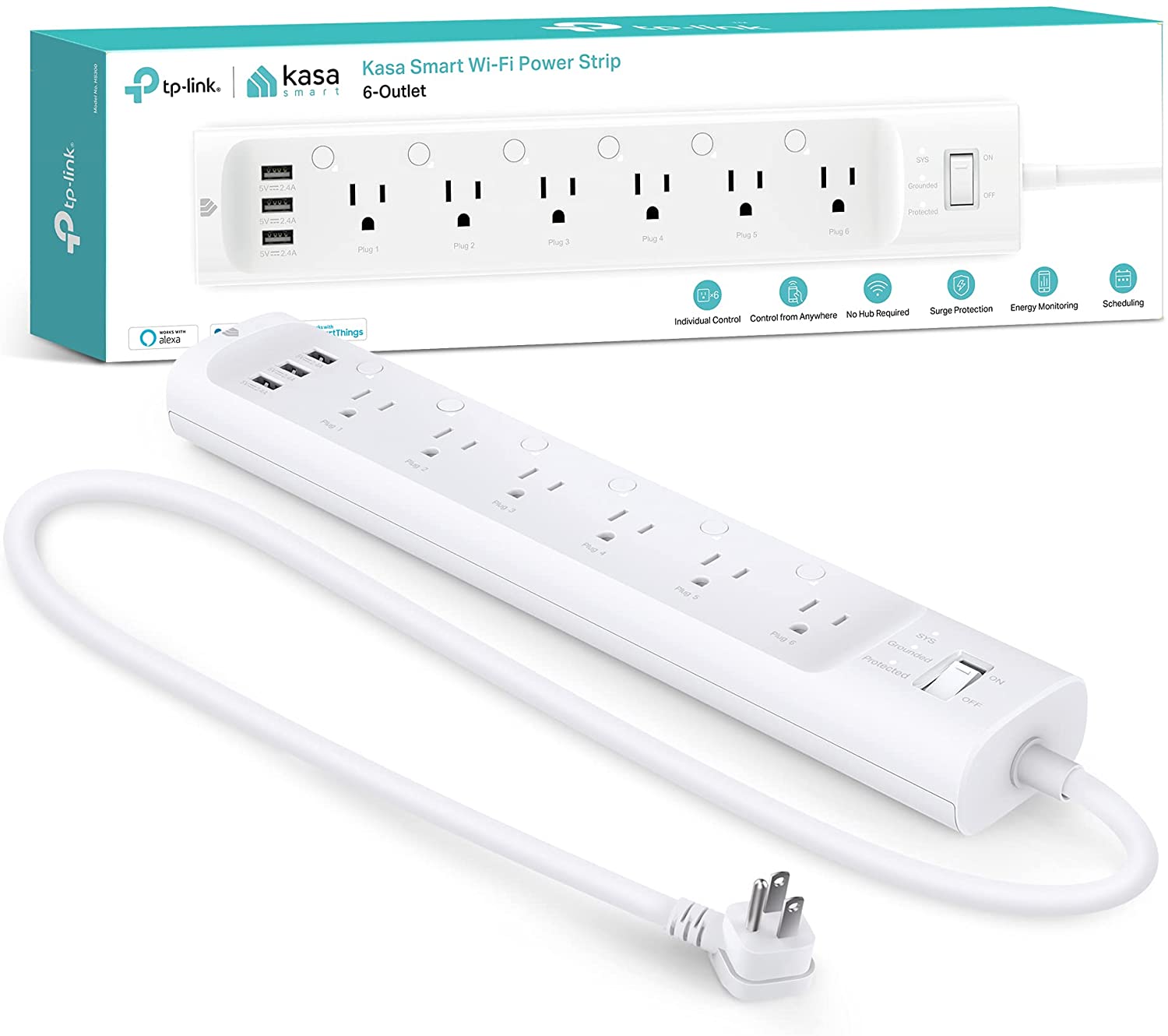 If you take your decor choices seriously, then you may not want a bulky and ugly power cord. This extension cord from GE comes in white, black, or gray, and it features a braided cord. The braided cord has a heathered design that makes it more aesthetically pleasing than traditional power cords. The unit has three outlets and an eight-foot cord, and other lengths and outlet quantities are available from this listing. As for safety, the GE offers some surge protection as well, making it suitable for small electronics. 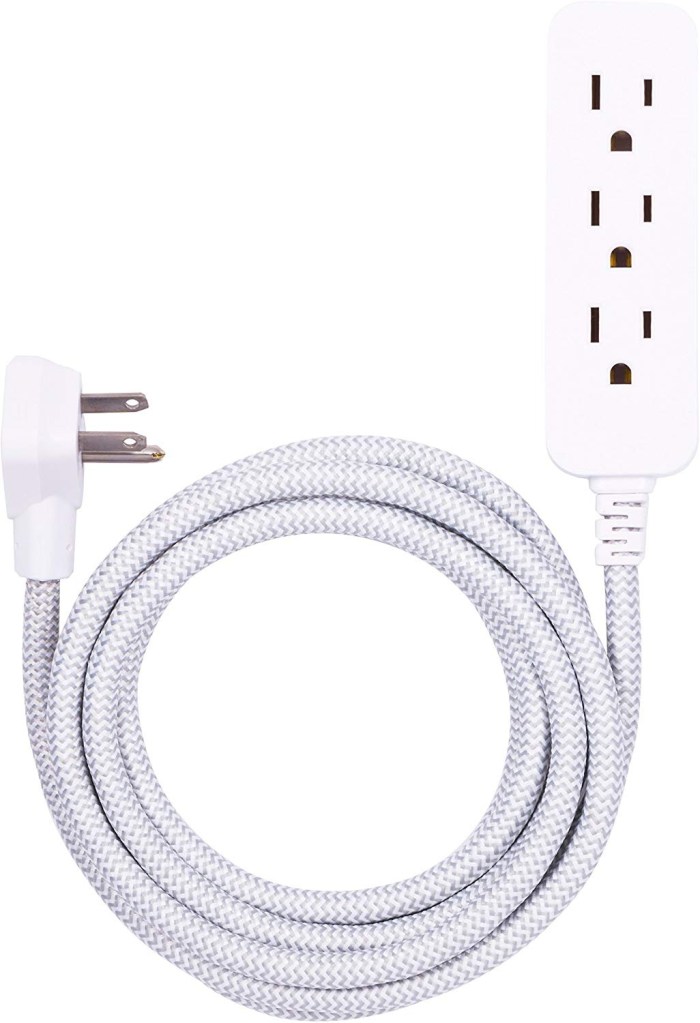 If you need to charge devices for a large group, the BESTEK eight-Outlet Surge Protector has a port for everyone. Not only does the power base come with eight outlets that are built with 1,500 joules of surge protection, but the BESTEK also has six USB intelligent charging ports. The BESTEK is able to detect each device and deliver the fastest maximum charge available up to 2.4A per port. The BESTEK also includes two independent switches that help to save energy. The wireless platform works with all Qi-enabled devices, offering a quick, wireless charge that still features safety features like over-current, over-voltage, and over-temperature protection. Measuring just under six inches tall with a six-foot cord, the BESTEK is easy to place just about anywhere. We also like that it comes with a built-in safety door to protect fingers. 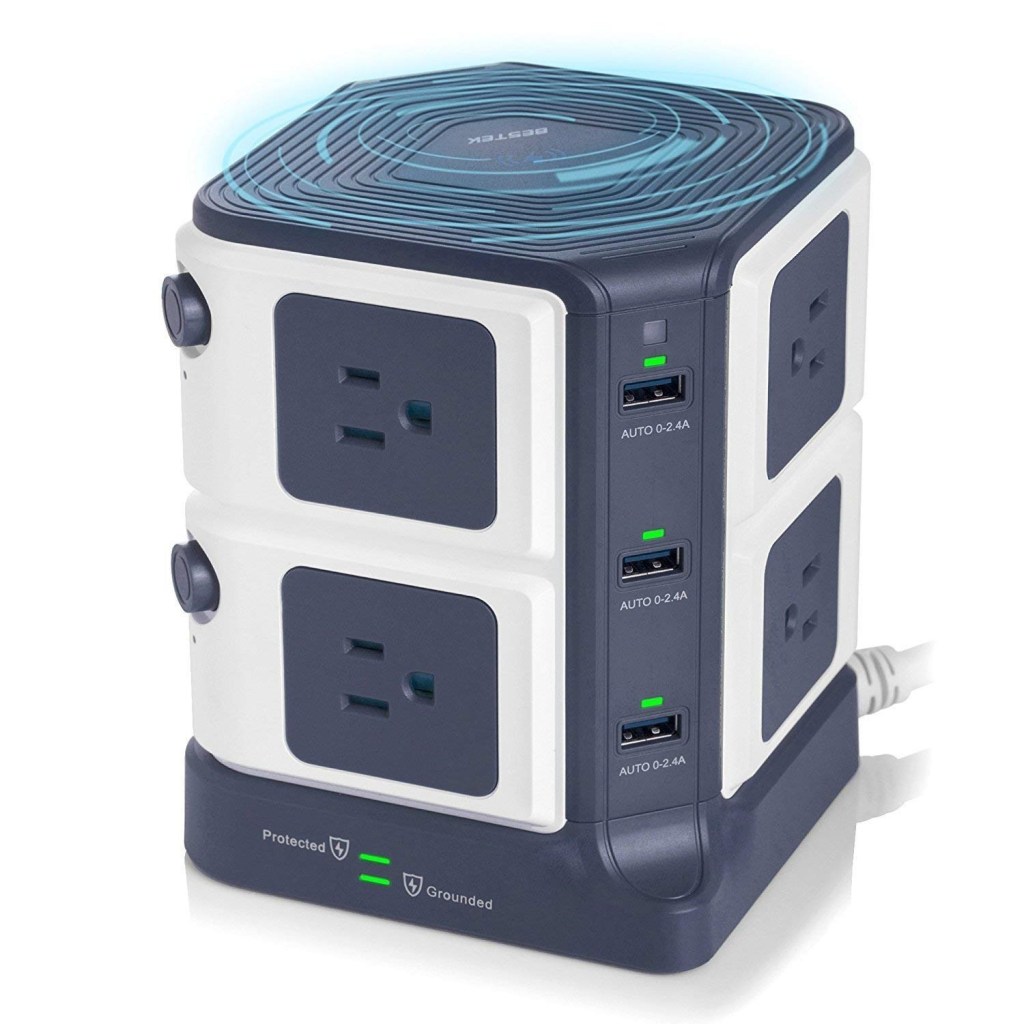 Power strips with surge protection are a convenient way to plug in multiple devices and appliances at once and ensure they’re protected from power spikes, but the one drawback is that they’re often bulky and an eyesore. That’s why we like the APC 11-Outlet Surge Protector Power Strip, which is designed with a space-saving 90-degree angle for its fix-foot power cord, meaning no more large cords forcing your power strip to stick out from behind a desk. The APC features a 2,630 Joules surge-protection energy rating and comes with eight outlets and two USB ports. 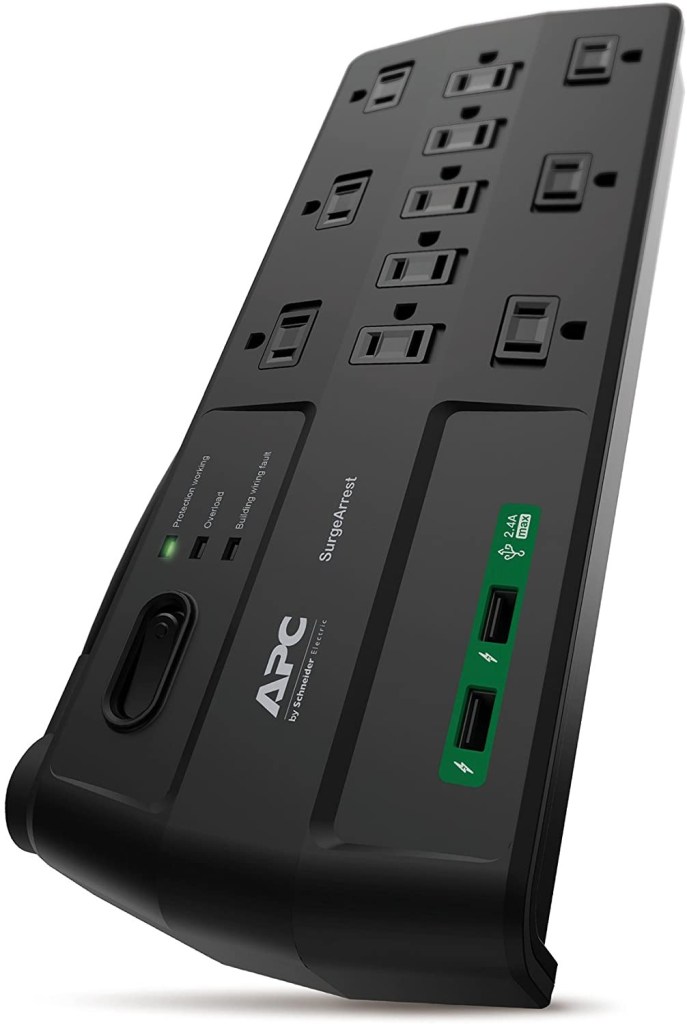 The AHRISE power strip is a good option for any workstation or home office setup that does not require surge protection. Its square shape is less obtrusive than a long power strip, without sacrificing functionality. There are six outlets, an on/off switch, and four USB ports for charging your phones and other devices. The AC outlets are widely spaced to plug in multiple devices. Unlike the other units on our list, the AHRISE does not offer surge protection, which is required in some instances when traveling (many cruise ships do not allow for surge protection). 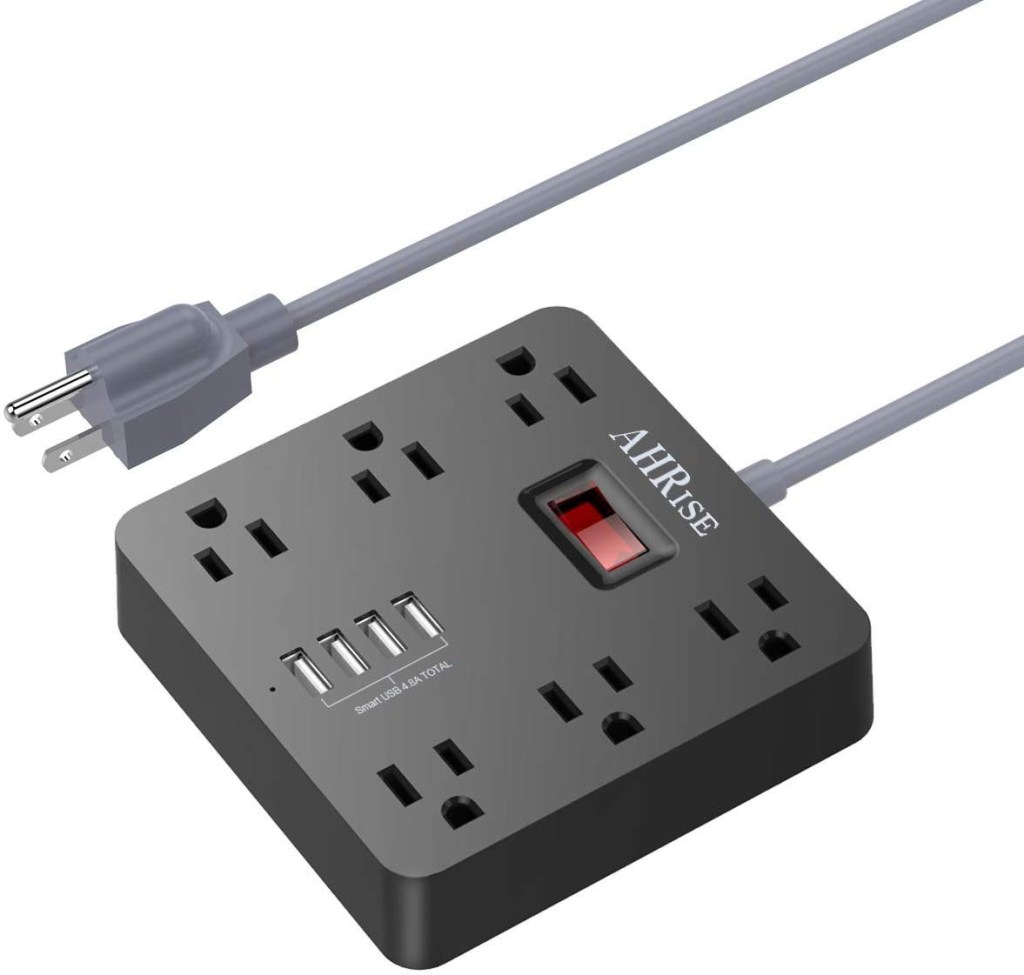 If you’re looking for an option for your workbench or computer desk, then this metal power strip with surge protection from Opentron is your new best friend. It has 12, widely spaced outlets, making it easy to plug in awkwardly shaped, oversized plugs that often come with power tools. The entire unit is four feet long and has a six feet long power cable, making it easy to set up along the ground or higher if used above a workbench. Hardware is included for mounting the unit and there’s a built-in surge protector for up to 400 joules and a circuit breaker for safety. 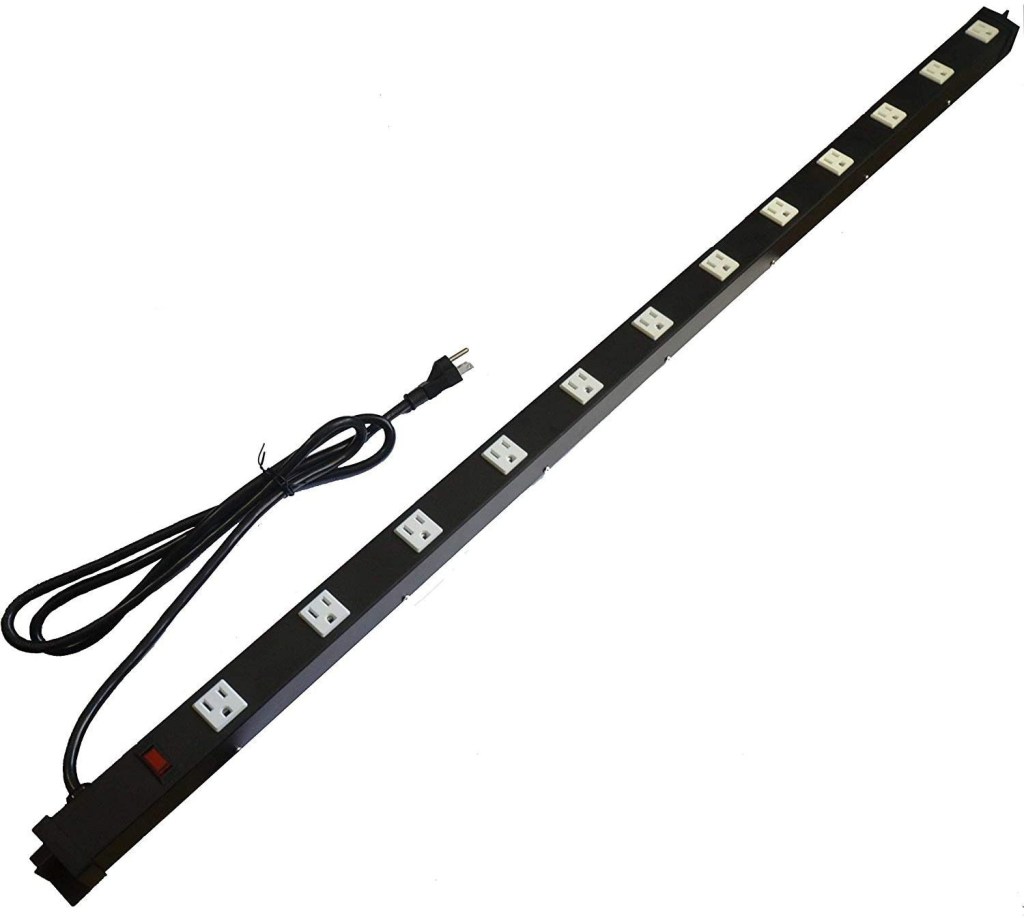 Areas with minimal space for trailing cords will benefit from this sleek surge protector. With five AC outlets on three sides, the plugs have plenty of space in between to accommodate bigger plugs. This power center has overload protection, short-circuit protection, over current protection, over-voltage protection and overheating protection. It will automatically cut power to protect connected devices when a voltage surge is detected. Combined with a fire-resistant case this is a solid option for keeping you and your devices safe. 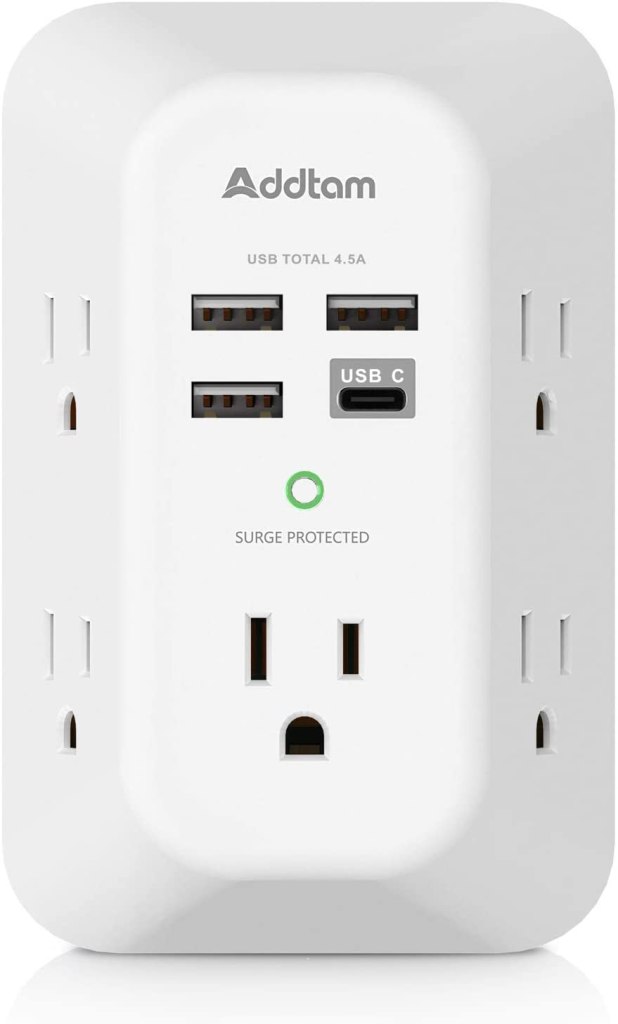 If standard surge protectors are too basic for you, consider the Cadillac of the surge protection world. The Austere VII Series has six or eight AC outlets, two USB A, and three USB-C outlets, one of which is a 45W USB-C PD port for your laptop. Austere offers a lifetime warranty on this series, but it’s the chic looks and beautiful packaging on this one that is a big draw: It has sleek lines, a braided cord, a diamond-shaped wall plug, and overcurrent protection to stop overcharging.

The Monster Power Center Vertex XL has 10 AC outlets with 3,000 joules of surge protection plus a handy on/off/reset button and LED lights to indicate the surge protector is on. But the unique property of this one is its 6-foot extendible USB hub with three additional outlets. The mini-hub is at the end of a long cord which means you can keep some USB (both A and C) outlets closer to you (a magnet mount allows you to fix it to a desk) instead of always rooting around under the desk or on the floor. That hub can also deliver power (20w) to your laptop via USB-C so you don’t need to worry about the hulking AC adapter that came with your computer. 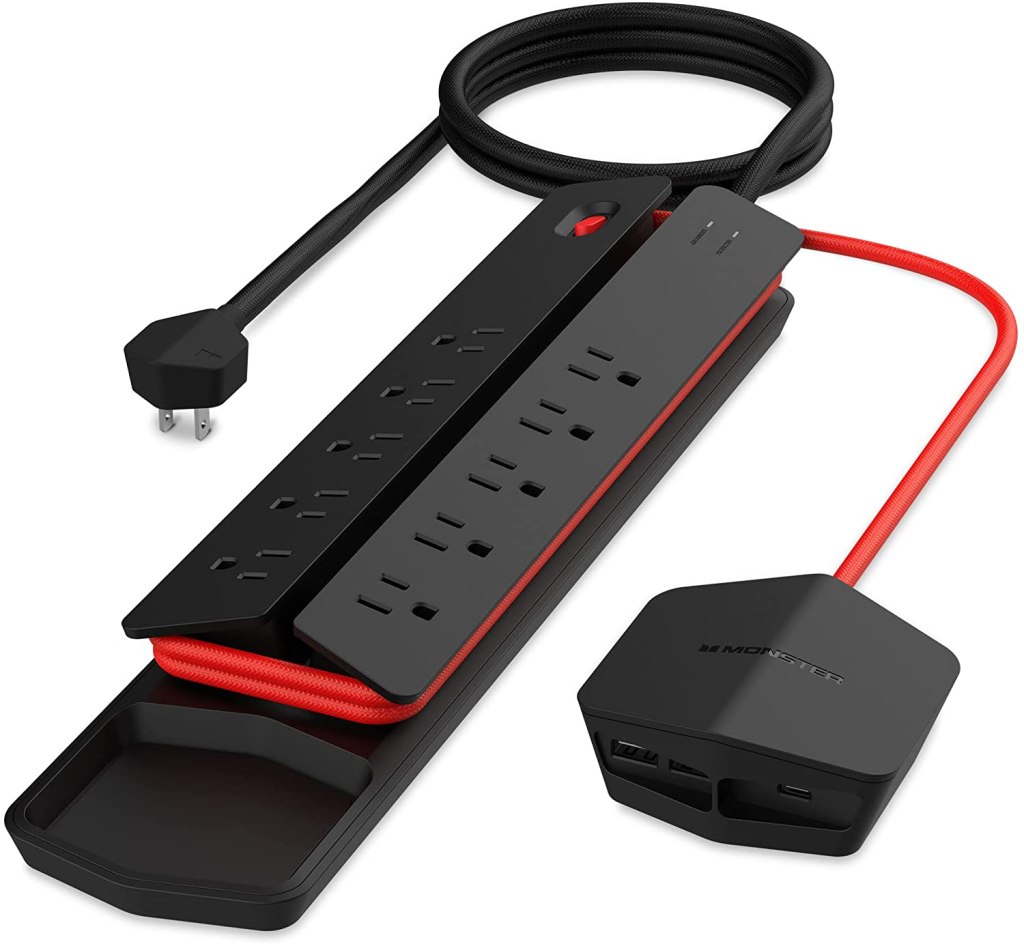