Cars are designed to get riders from one location to the next, but for many drivers, their vehicles are much more than that. They’re a makeshift office, an area to study, a place to catch up on emails or TV shows while babies nap in the back. According to AAA.com, Americans are spending an average of 20 minutes more in their car each week compared to 2014. Whether you commute to work in your vehicle, use it mostly for errands on the weekend, or take long road trips any chance you get, there’s a good chance you’re going to spend time in your car with your devices. So, having a multiport car charger that can charge all your devices and the devices of all your riders is a great way to multitask while driving.

Multiport car chargers plug directly into a car’s socket, pulling energy from the vehicle that is used to charge devices. Using USB ports, drivers can easily connect their phones, laptops, tablets, cameras and more to the chargers. This is great news for drivers with multiple devices or those who travel with several people at one time. No more backseat fighting over who gets to charge their phone next!

Not only are multiport chargers convenient, they also offer added safety. No more getting lost because your phone and GPS app has died. In emergency situations where your home has lost power, devices can still be charged in your car.

If you drive a car and have a phone, you need a multiport car charger. Check out three of our favorite options below.

Dubbed as the most powerful car charger ever, the Jelly Comb Car Charger boasts an impressive six USB ports and 65W of power to charge devices at their maximum charging speed.

Pros: The Jelly Comb has a six-foot-long cable, which makes it easy for passengers in the back seat to reach.

Cons: The Jelly Comb works best when used with a devices’ original cable. 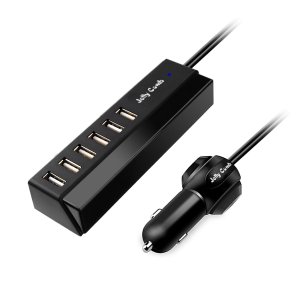 Pros: The AmazonBasics includes a non-distracting LED light that tells users the charger is working. It also features overload, short-circuit, and overvoltage protection for safety.

Cons: The AmazonBasics does not have an additional wire like the Jelly Comb, which makes it difficult for people in the back seat to reach it. 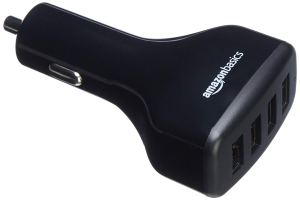 Turn your single car socket into two sockets with the Rocketek 2-Socket Car Splitter Cigarette Lighter Adapter, which not only doubles your sockets but also includes two USB ports. The Rocketer can easily be adjusted and angled 360 degrees and won’t interfere with radio, Bluetooth or WiFi.

Pros: The Rocketek has a Fuse & Smart IC, which automatically stops charging your device when there is a danger of overcharging.

Cons: The Rocketek has the fewest number of built-in USB ports on our list. 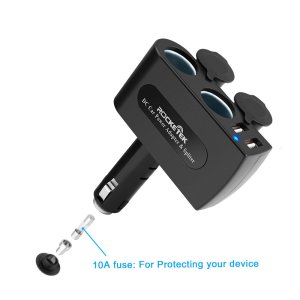