Seriously, it’s very rare that gaming consoles ever get discounts, but when they do, they’re typically somewhere in the $5 to $20 ballpark range. That’s why we’re stoked about the $40 off savings that Amazon is offering for a limited time with this Nintendo Switch deal. If you’ve been holding off on this popular handheld, now’s the time because a deal like this rarely happens. 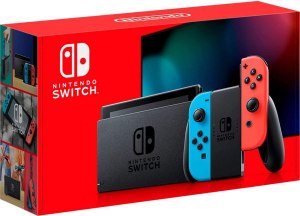 Why The Nintendo Switch Is A Great Deal

What We Love About The Nintendo Switch

Without question, it’s the choice of being able to play it as a traditional console or a handheld for on-the-go gaming. The Nintendo Switch’s ability to go from console to handheld without sacrificing on the graphics and gameplay has made it a stand-out winner. While at home, we love playing titles on our fancy-looking smart TVs using the included dock. However, we also appreciate how we can easily transition to mobile play using it as a handheld console because of its battery power.

Even though there are plenty of titles you can play on your own, the Nintendo Switch’s appeal is its multiplayer gameplay. That’s because you can remove the Joy-Cons from the console and use them separately as a standard controller. It’s the perfect thing if you’re having a party and want to play games like Super Mario Party, Mario Kart 8 Deluxe, or Super Smash Brothers Ultimate. You can even link multiple consoles to add even more players into the frenzy, making this limited time Nintendo Switch deal even better.

Lastly, there’s a rich library of titles ranging from classic Nintendo properties like Mario and Legend of Zelda to old-school retro titles that are available on Nintendo Online. If you’re a fan of old school gaming titles that were created for the original NES or Super Nintendo, you’ll enjoy the classics like Super Mario World, Super Mario Brothers 3, and much more in the library. And yes, there’s even a collection of Sega Genesis video games you can tap into as well — like Sonic the Hedgehog.

We can go on and on why it’s beloved, but you really can’t miss this Nintendo Switch deal.

The Best Gaming Laptops You Can Buy in 2022