A good home security network is hard to come by. Either the price is too expensive or the software is too complicated — or both. That’s why the Norton Core is so fascinating. As the self-proclaimed future of connected home security, this is easily one of the most versatile home routers on the market.

I recently had the chance to get my hands on the new router and take it for a test drive. Toting a state-of-the-art security system backed with Symantec’s signature antivirus software, the Norton Core had a lot to live up to. Needless to say, I couldn’t wait to dive in. 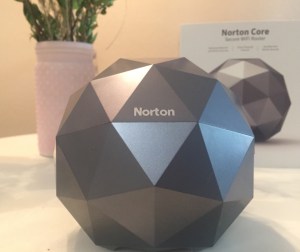 Right out of the box this thing looks pretty awesome. Sporting a sleek geodesic design, it looks more like a strobe light than a router. It wouldn’t be a stretch to say that this style is a complete departure from traditional routers that are usually cluttered with cables. In fact, Norton actually included a wire clip to help clear up any loose ends (they even mention attaching the clip as a step in the installation process).

For anyone who’s had the unfortunate luck of having to spend countless hours on the phone trying to troubleshoot their router, the Norton Core is a breeze to install. I simply had to download the free Norton Core app, sync it to my phone and follow the animated step-by-step instructions to get it up and running. All in all I’d say it took less than five minutes from the time I opened the package to the time everything was set and ready. That kind of convenience just can’t be beat — especially for something as inherently complicated as a security-focused router. 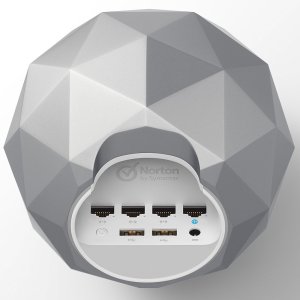 With only three Ethernet ports located on the inside of the dome, it’s clear that the main focus here is on incoming and outgoing WiFi traffic. Fortunately, it doesn’t disappoint. Norton’s detailed in-app activity feed lets you check your network security in real time. You can also manually go into your network settings and choose which sites are allowed and which are blacklisted. This is a great feature to help monitor and protect devices connected to your network — especially if you have younger kids at home. Best of all, it comes with a free 12-month subscription to the Norton Core Security Plus software. After the first year you can choose to either cancel the service or renew it for $9.99 a month.

The network inspection feature is essentially a benchmark feature of this router, and it comes with three levels of security: the default level monitors traffic to and from sites not recognized by Symantec; the advanced level looks at every encrypted network and protects against malware content; and the lowest level, which isn’t recommended, will offer no protection but will likely boost your network speeds. I ran a speed test with each security protocol and didn’t notice any significant changes in speeds. Therefore, I don’t think it’s worth messing around with the security changes in favor of a faster network.

You can even set up and delegate additional access points to help keep users connected. Going a step further, you can actually create time-sensitive login keys for friends and family. What this essentially means is that after a pre-allocated amount of time the specific user login code will disappear. It’s a nifty bonus feature for when you have guests over but don’t want to give them unrestricted access to your network. This would be great for Airbnb hosts, other vacation rental configurations, or anyone who is fortunate enough to have a lot of visitors dropping by on the regular.

One of the best things about the Norton Core (and arguably its single biggest selling point) is the app’s built-in security score. By continuously monitoring your network, Norton’s able to provide you with a score indicating just how secure your network really is. With phones, tablets, PCs and more all under the same connection, this is a great feature to have as it offers a real-time look at how your network is performing. On a scale from 0 to 500 (with 0 being Facebook’s privacy settings and 500 being Alcatraz), my score is currently a cool 495. 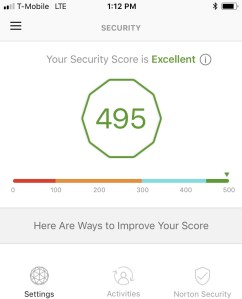 If you have kids at home or are looking for a high-speed router that just so happens to offer extra security and data monitoring, the Norton Core is for you. While keeping my Norton subscription after the free 12-month period is TBD, I’ll definitely be keeping this router around. With 1GB of RAM and above-average speeds, this router is powerful and fast enough to use on its own. Plus, not only is it not an eyesore in a product category most notable for its endless array of dull black slabs, but it’s likely to prove an actual conversation-starter on display in your living room.

For a limited time you can snag the Norton Core for $20 off at this link, in either Titanium Gold or Granite Grey, for $179.99.