There is a lot of excitement and anticipation about the new Sony Next Gen gaming console. When the gaming console –– we are assuming it is going to be called the PlayStation 5 –– is finally released during the holidays in 2020, it will had been seven years since Sony released its predecessor, the PlayStation 4. Needless to say, people are ready for the new system and already, plenty has leaked about the upcoming console.

Before we dive into the rumor mill, here are some of the things we know for sure. Sony is planning on releasing the new console “Holiday 2020.” We think it is safe to assume that means around Q4 of next year. And we know the new console is going to have a physical disk drive. Mark Cerny of Sony did reveal a bit more information in an interview with Wired, which we will touch on later in this article. Beyond that, nothing is for certain, but it’s still fun to gossip a little bit about the newest gaming tech. Below is the most recent speculation about the PlayStation 5, *cough* we mean Sony’s Next Gen Gaming Console.

To help avoid any serious information overload, we’ll break this section down in the simplest terms we can. The CPU is an eight core AMD chip that is supposed to feature a visual aspect called ray tracing. Ray tracing has to do with the way light bounces and reflects off surfaces. So, what does that mean? This means more realistic visuals and according to Mark Cerny of Sony, it also means much better audio from that of the PlayStation 3 and 4. The new soundscape is supposed to be totally immersive 3D audio. Gamers that wear headphones will certainly be impressed by the new elevated audio standard.

Sony is looking to reach as far back into the past as they can as well as strive towards the future. This has lead people to believe that the backwards compatibility is going to be robust. Backwards compatibility allows you to play games from previous PlayStation consoles on the newest console. Engineering a console that can play physical discs as far back as PlayStation 2 would be a large feat. It is more likely that Sony will revamp PlayStation Now with a much more robust library of older games. Regardless, we think it’s at least safe to say that old games have a bright future with the PlayStation 5. 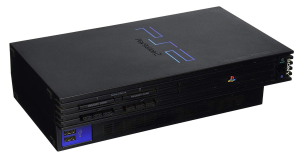 The new console is rumored to be more visually striking than ever. This means 8K TV support. 8K quadruples the amount of pixels displayed when compared to 4K. The difference isn’t going to be insane, unless you have a large TV that is also 8K enabled, and right now, those run around $5,000. Just know that if you decide to go big (no pun intended), and get a 8K TV to match the capability of the PS5, you will most likely be visually rewarded. 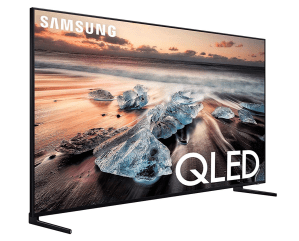 With all of the visual and audio capability of the new PS5, people are worried that there will be horrendous load times. According to Mark Cerny of Sony, the new unit is going to feature a solid state drive (SSD) that is going to increase the loading speed of the new console by 15x. This may also allow users to download portions of games instead of the entire game. For example, if you are never going to play the campaign of a game, but you want the multi-player gameplay, you will be able to download that portion of the game only, saving space on your console and maintain speed as well. This will be huge for the gaming world if this capability comes to fruition.

According to multiple sources including Toms Guide and Tech Radar, the PS5 is going to feature a 4K blu-ray player. This puts to rest some early speculation that the console wasn’t going to have a physical disk drive at all, like many laptops that are produced today. And it also provides some extra utility. Having a gaming console that can declutter your home entertainment system is a secret benefit. If you want to really declutter your home entertainment system, check out our article on the best universal remotes.

The new PS5 is going to support PlayStation VR, but there might even be a PlayStation VR 2 on the horizon. It is rumored that the old VR cameras are going to be replaced with cameras in front of the headset which will improve movement accuracy. Virtual reality is the next frontier for gaming. If Sony can push the envelope and improve VR gaming, Sony is going to make a lot of new fans out of gamers all over the world. 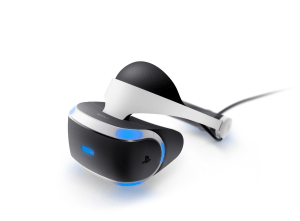 In May, Sony and Microsoft announced a partnership in cloud gaming. This has led many to speculate that we might see a revamped PlayStation Now platform, or even a brand new platform altogether. It will be interesting to see what shakes out, but with the backwards compatibility rumors and this current partnership with Microsoft, we will all be waiting patiently to see what Microsoft and Sony can come up with. 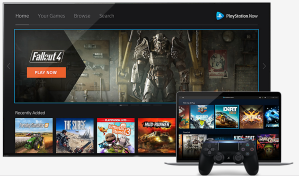 While the name DualShock 5 is more of an assumption than a rumor, the new controller itself should have some nice tricks up its sleeve. The new controller is said to feature adaptive triggers, which would provide some resistance. For instance, if you were driving a car in a game, and as the car became more banged up, it might be harder to brake or steer the car, you would feel that resistance in the controller’s buttons, adding a bit more realism to the game. The controller is also supposed to be charged by a USB Type-C connector and have a longer battery life than previous controllers. 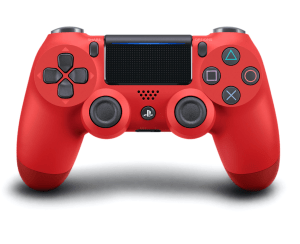 Price is always a little tricky. There is some speculation that the PS5 will cost $499. But we’ve seen other reports that the price could be as high as $599. Of course, the PlayStation 4 was $399 when it was released, so there is always the slight chance that we could see a similar price. If there is one nice thing about a new console coming out, expect a pretty decent discount on PS4s around the PS5 launch. Mark Cerny gave Peter Rubin, author of the Wired interview, a little tidbit about the pricing via twitter: 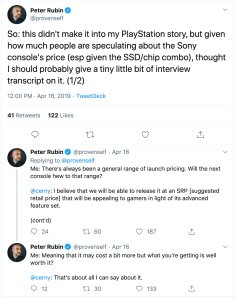 Musicians, Gamers, Podcasters and Youtubers Will Love These Computer Microphones