Everyone knows it’s the wand that chooses the wizard. Unfortunately for us non-magic folk (or Muggles, as we’re commonly called), magic wands are in short supply these days and there are definitely no Ollivanders to turn to. But fear not: Now you can add a little magic to your daily life with this brilliant Harry Potter-inspired remote control!

Designed to look and feel just like the real thing, this wand works with any and all IR devices, which means it’s compatible with most TVs, Blu-ray players, speakers and more. Able to program up to 9 tasks (or gestures, as they call it) at a time, you can pre-program your trusty wand to change the channel, pump up the volume, switch to your TV’s HDMI settings and more. Best of all, the remote’s functionality is both easy and intuitive — to execute a specific command, you either roll the wand clockwise, counterclockwise or flick the wand in any number of directions. You can cast Expelliarmus just like Harry, only this spell simply changes the channel! 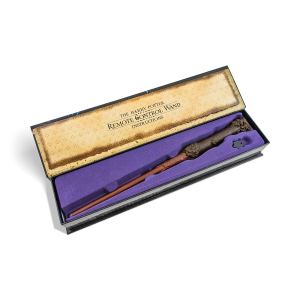 Unlike other remotes, this wand is able to work with multiple devices simultaneously, so you won’t have to worry about switching the controls when you turn on your Blu-ray player. And while you’ll need to sync it to work with your various devices, setting everything up is surprisingly easy and only takes a few seconds. In fact, programming this wand is so simple, we might even say it’s magic.

To program the wand, simply press the button on your wand three times and then hold until the tip flashes green and begins pulsing and eventually turns orange. Once that happens, you’re clear to do your desired gesture. After doing your gesture, point the tip of the wand about an inch away from your remote and press the desired button you want to teach your wand. If it worked, the tip of your wand will turn green and you’ll feel a hefty pulse emanating from your trusty wand.

Oh, and did we mention how great it looks? Seriously, there’s enough detail here to make it look like it jumped right off the screen and onto your lap. It’s also officially licensed, which means you’re not buying some kind of sketchy third party product. Plus, having to give the wand a little twirl in order to execute a command is actually pretty darn fun. A few minutes with this wand and your standards for remote controls will never be the same.