Snap, formerly Snapchat, isn’t just the company behind one of the most beloved photo-sending mobile applications. In recent years, the brand has expanded its reach into the tech world by releasing a series of tangible products. Their first release, Spectacles, wasn’t super well received. Now, Snap is back with a new release: Pixy, which is a mini drone designed with active social media users in mind.

Drones are pretty ubiquitous nowadays, so the brand has offered up its unique spin on the device, one that’s inherently friendly to those who already have Snapchat installed on their smartphone and for those who don’t want to go to Top Gun-levels of flight school to learn how to operate it. Snap sent SPY a unit for review, and we took this brightly colored flying machine for a test drive.

Keep reading for our full Snap Pixy drone review and find out if this miniature drone is worth the $250 price tag.

Read More: Reach for the Sky: These Are the Best Drones You Can Buy in 2022

What Is the Snap Pixy Drone?

Instead of functioning as a fully controllable drone, the Pixy offers pre-set functions, so the drone remains a social-first device. The Pixy features four main flight modes — Hover, Reveal, Follow, Orbit — and a Favorite mode that can be customized from within the Snapchat app.

The primary flight patterns are pretty straightforward. Hover floats in the air and tracks movement (Pixy detects objects instead of people which is great for privacy). Reveal starts close and eventually flies away, revealing more of the surrounding environment as it gets further away. Follow is very simple and the Pixy floats behind and hovers along as a person walks. Orbit circles around the user with the ability to adjust the radius to three different orbits depending on the available space.

Once the video is recorded, Pixy pairs with Snapchat and can export the footage. Inside the app are options to edit the video, including trimming, applying filters, exporting to a camera roll or even directly to Snapchat stories. The Pixy includes 16GB of internal storage, which is about 100 videos or 1,000 photos, depending upon the overall settings of each. 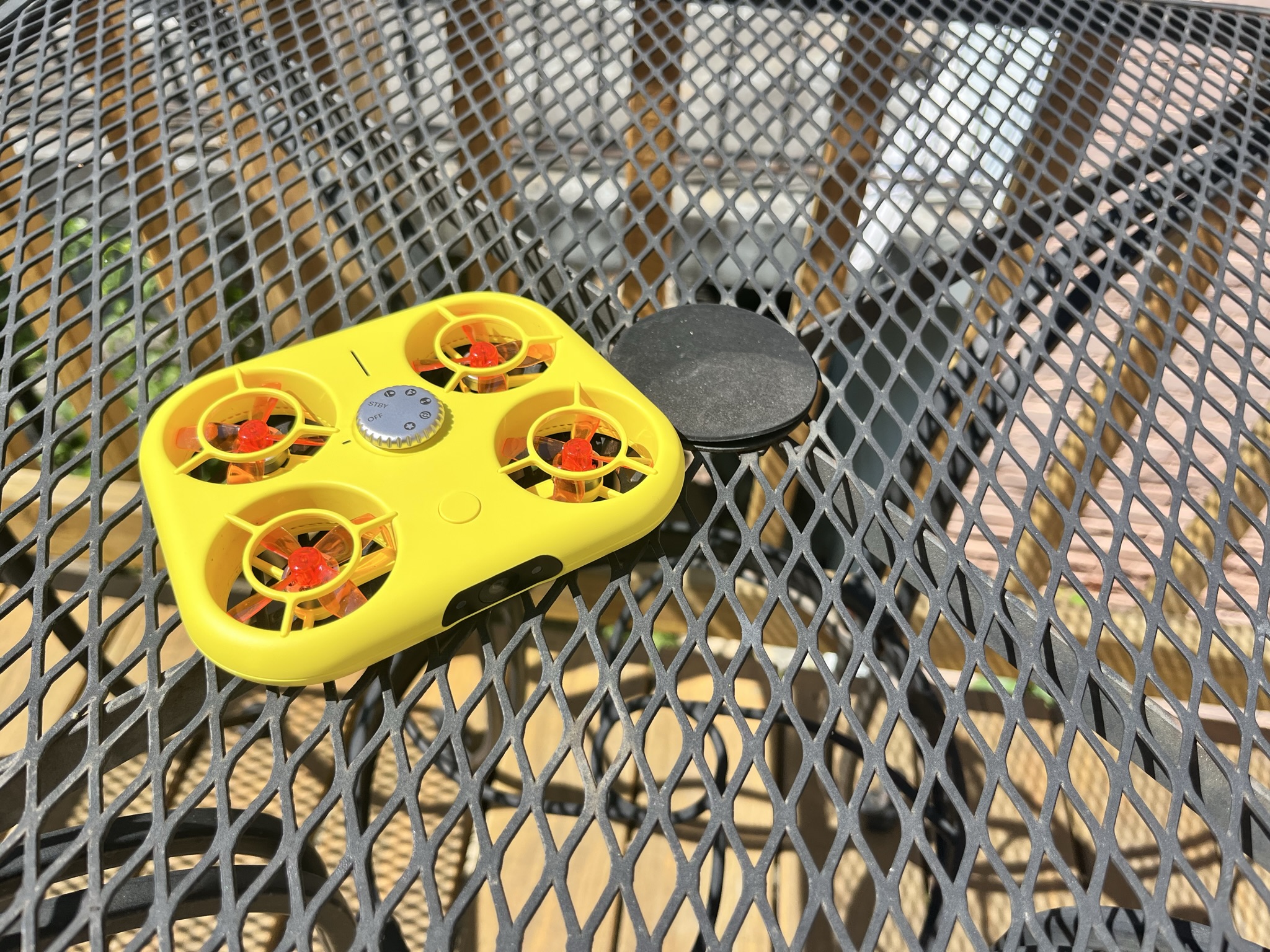 Setting Up the Snap Pixy Drone

It’s easy to see how small and portable Pixy is inside its clear packaging. After removing the top portion and unfastening the Pixy, there’s an undercarriage area with a carrying case and instructions for pairing the drone to a smart device. Pixy, being a part of Snap, requires Snapchat, so users planning on getting Pixy will need to ensure the app is installed.

The setup is straightforward, with only a few steps to pair it with a Snapchat profile. Turn the top knob to put the Pixy in pairing mode, connect it to the Snapchat profile over WiFi, and then press the pairing button on the front of the device. Pixy is meant to be easy to use at every step and the entire process took us a few minutes, though it may take a little longer if you need to install Snapchat.

The Pixy excels in the product’s overall look, feel and design. It’s easy to fit the device in a back pants pocket and it’s slightly broader and shorter than an iPhone 13. Snap also provides a dedicated carrying case to keep the drone protected.

The top of the Pixy contains a launch button right above the 2.7K camera, and further behind that is a control knob. Similar to adjustment dials on point-and-shoot digital cameras, the control knob on the Pixy cycles through the various flight patterns pre-built into the device. You’ll see the four fans on the sides that allow the Pixy to fly. Flipping over the unit reveals the removable and rechargeable battery and a sensor that can detect a user’s hand, allowing the drone to take off and land. 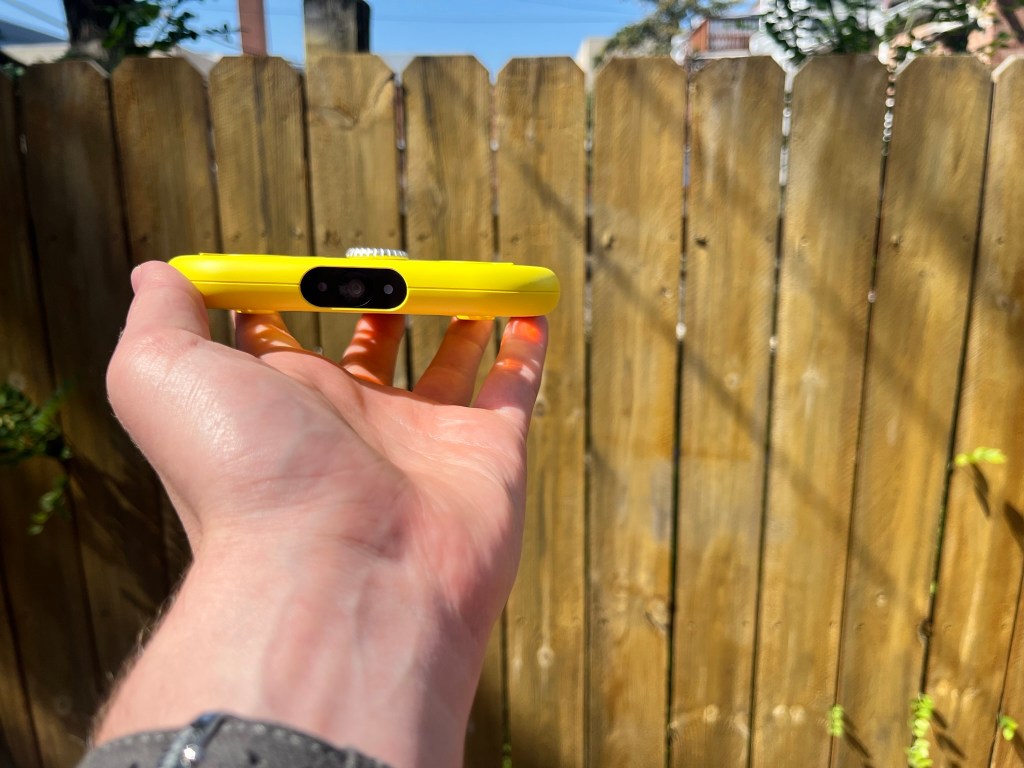 I’m mixed about Pixy’s performance. It’s straightforward to use; the execution of the drone flying and landing on my hand works well, the pre-coded flight patterns are well defined and overall the performance is good.

The Pixy falls short when it encounters an obstacle or the slightest breeze. Case-in-point, using the Reveal setting, much to my surprise, floated into my neighbor’s yard. What seemed a slight breeze knocked it clean out of the air and into the grass below, where I had to fetch it back. Also, the grass caused the interior of the fans to get dirty; while a slightly wet paper towel cleaned it up, some sort of dedicated cleaning tool could also be helpful. You can see the moment where the Pixy begins to fall in the gif below:

Additionally, when using the Orbit setting, even in the tightest circling range, it still managed to hit my fence and tumble into the grass since there’s no object detection on the Pixy.

The quality of the video is average. For something that shoots in 2.7K, I found the footage looks decent. Some outdoor footage I shot on my back patio looked overexposed in the sunlight, but using the Pixy on my front porch for an afternoon picture of my outfit looked much better.

Those keen on image quality will want to consider doing a test flight before extensive shooting to understand what the light will look like in the footage. What’s slightly frustrating is the ability to only shoot in horizontal mode; on videos, you can trim them vertically, but you can’t do that for photos. The overall quality of both photos and video is probably a step back from what you’re used to seeing on a top-tier iPhone, but it still produces a good image.

Speaking of extensive shooting, don’t plan on much of that. The battery life on the Pixy leaves a lot to be desired. Snap claims the battery lasts about 10 flights or about four to five minutes on a single full charge, which we found accurate in testing. While this battery time would work for a few quick videos or using it as a floating tripod, if you’re looking to use the Pixy for a day-long shoot, it almost feels mandatory to purchase the dual-battery charger at an extra expense of $50.

Where Pixy excels is in how it’s simple and easy to use. The setup only takes a few minutes, and most will find it easy to operate and get instant results. The lack of a memory card and its ability to connect directly to Snapchat makes it super sharable and great for those that want to share drone-style pictures or videos on the go that look good. The portability is unmatched, especially compared to other drones, making it great to break out on trips or anywhere quickly.

The Verdict: Should You Buy the Snap Pixy?

There’s a lot to like with the Snap Pixy, such as the portability and ability to quickly take aerial footage without having to shell out as much as you would for a traditional drone. Ultimately feels like an excellent 1.0 version, offering much to love but plenty to improve on. The stripped-down nature of the product is a welcome turn from other complicated drones, but I can’t help but wish the device had a better battery life and camera.

However, Pixy is a much more intriguing product out of the gate than previous offerings by the company, and I’m interested in seeing how Pixy will grow and evolve. There’s a good foundation here, and improving it in the future could turn it into something special.

If you’re looking to get into drones and want something easy to use and can function as a floating tripod, the Pixy is definitely worth it. If your needs are a little bit more extensive, hold off. 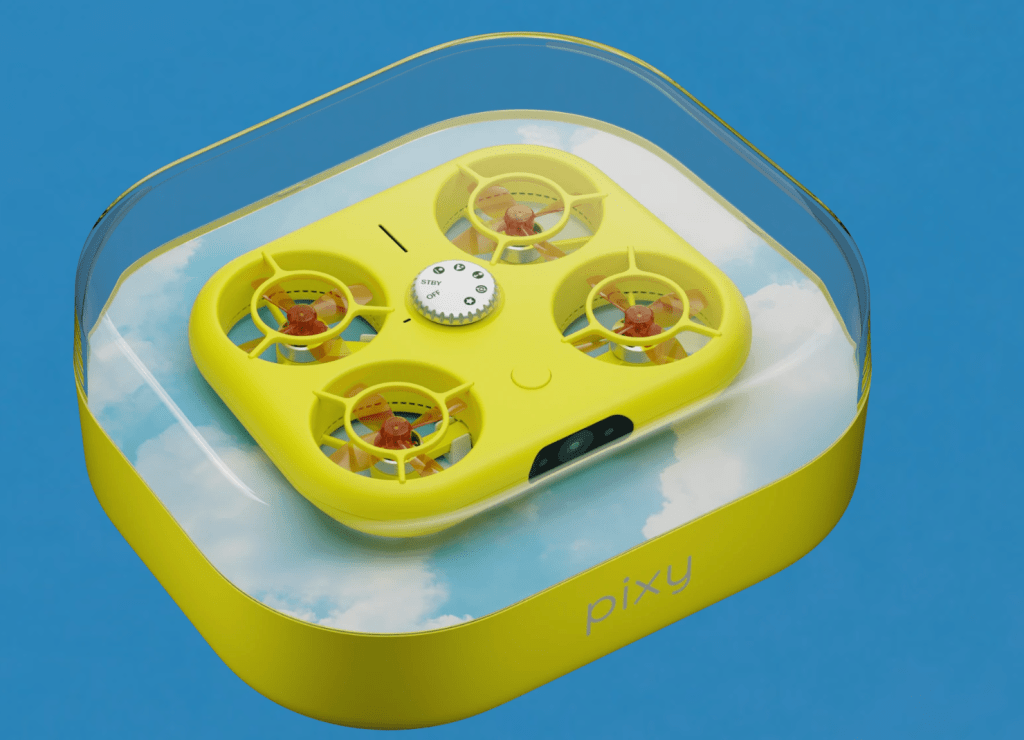 Here are some alternatives if you’re looking to buy a drone and the Pixy isn’t a good fit.

DJI’s Mavic line is one of the more well-known and respected brands in the drone sphere. The Mavic Air 2 offers many great entry-level features, including excellent object detection, 4K video, strong battery life and more. 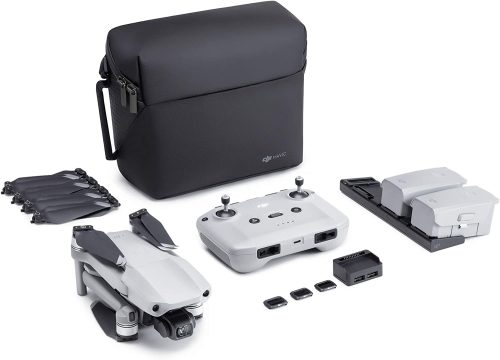 Another DJI offering, but the Mini is about as close as you can get to a value-based drone while still offering plenty of solid features like a 4K camera, 31-minute flight time, wind resistance and more.

More of a toy (albeit expensive) than a hobbyist-level drone, the Ryze Tech Tello drone is a fantastic entry-level drone for young children to experiment with before graduating onto something more extensive. 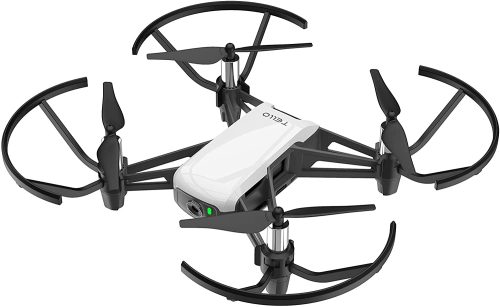 Earn Your Wings With the Best Drones for Beginners