Solar-powered generators are an incredibly smart solution to power outages, or the need for a power generator while you are out camping. Because they harness the power of the sun, they don’t emit anything toxic like a gas generator when running, and solar generators essentially don’t make any noise when in use. This makes them great to use both inside of the home and out. And when the generator needs to be charged, there is virtually an endless supply of power thanks to the sun.

What To Consider Before Picking a Solar Generator

Solar-power generators are one of the most useful tools you can have in your home, garage or car. But before you empty out your wallet on a new solar generator, here are some things you should consider:

The battery capacity is the amount of power that can be stored by your solar generator and is measured in watt-hours (Wh). The bigger the battery capacity, or watt-hours, the more power it can store. That being said, you’ll also want to pay attention to the battery power, or the amount of power a generator provides while it is operational. This maximum power rating is measured in watts (W).

It’s pretty simple. If you have a device, let’s say a power tool that needs 200 watts to operate, your solar generator will need a battery power that is equal to, or exceeds 200 watts.

Depending on your power needs, you might be better off with a 200Wh solar-powered generator as opposed to spending $1,000+ dollars on a hefty 1500Wh power juggernaut. For instance, if you plan on powering major appliances at home when the power goes out, you’ll want something with more battery power, but if you need a generator to power your devices like phones or lamps when you are camping, something with less power will do the trick. This handy calculator can help you determine the amount of power you need from your generator.

If the main reason for wanting a solar generator is to have power while traveling, then finding one that’s lightweight and housed in a durable chassis is key. For home use, you probably won’t mind having a bulkier setup.

Most solar-powered generators don’t come with solar panels, so that will most likely be an additional cost. But just know that most solar generators can also be charged by being plugged in, so if you opt to skip the panels, you aren’t left with a big ol’ battery you can’t charge.

How We Picked The Best Solar Generators

We picked the best solar generators based on the following criteria:

When you are out and about, you aren’t going to want to be lugging a big, bulky solar generator around, so we picked the most portable, yet powerful generators available. That being said, how good is your generator if you don’t have multiple options for charging. We chose solar-powered generators with at least:

The amount of power you’ll want is solely based on your needs, but wanting to get the most power for the best price is something everybody can agree with. Generally, the more power a generator packs, the bigger the price tag, but we searched for the most powerful and reliable solar generators with reasonable price tags, so you can get the most bang for your buck.

Below are our recommendations for the best solar-powered generators available.

Instilling confidence with 4.9 stars and 2,177 ratings on Amazon, the Jackery Portable Power Station is as reliable of a solar-powered generator as they come. The 1,000-watt generator doesn’t store as much power as the Ecoflow, but with three AC outlets, two USB-C outlets and a quick-charge port, you don’t have to worry about living without your laptop or your phone when power isn’t available. The Explorer 1000 can be purchased with solar panels for $500 more, or sold solo. 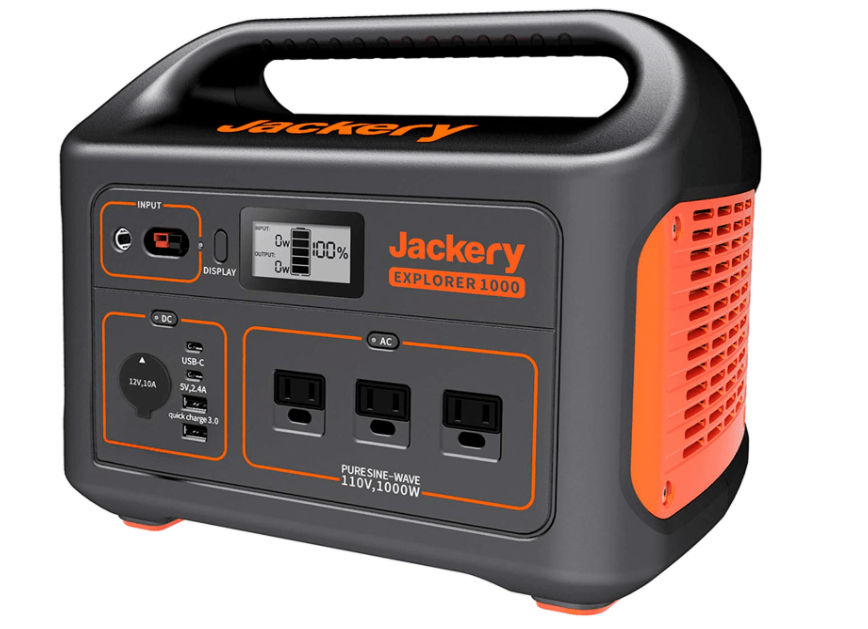 The MaxOAK and its 1500Wh can power anything from the refrigerator and TV to small appliances like your blender, laptop and phone. But all that power storage is neatly packed into a solar generator that is only about 14 inches tall and long, and weighs just under 40 pounds. It takes about eight hours to charge from an outlet, but with three 150 solar panels, it can be fully charged in as little as three to four hours. It’s one of the most powerful solar generators available, and for around $1,000, it is also one of the most affordable when you consider the power. 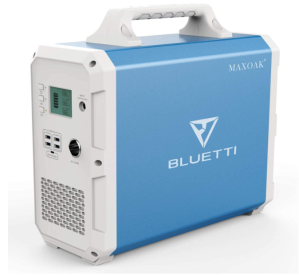 Whether you have a power outage at the home, or you need a reliable power source while you are camping, the EF Ecoflow has plenty of renewable battery storage to fulfill your electricity needs. The size may fool you, but with 1260Wh of stored power, as well as two USB-C, two USB-A, one DC outlet and several AC outlets, you’ll have plenty of ports to power a wide range of appliances from your laptop to a fridge. It’s a little pricier than the MaxOAK, but one of the best solar generators available today. 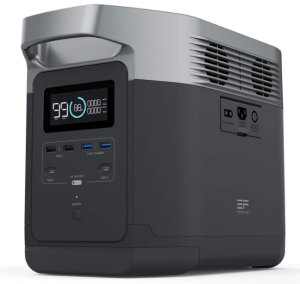 Providing a variety of charging ports including three AC outlets, a 60W USB-C port, a quick charge 3.0 port, an additional USB-A port as well as a 12V carport, there’s plenty of charging options. When it comes to power it boasts a hefty 1800W (3600W surge power). That’s heavy-duty and should power essentially all electronics and most appliances. It’s quiet, powerful and charges quickly. Our SPY team recommends this solar generator for RV camping and charging larger devices. 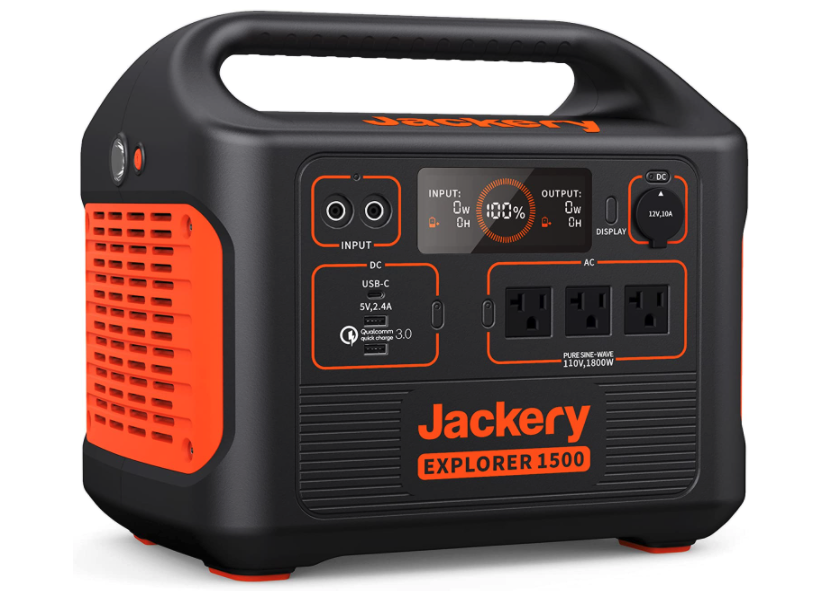 Simply put, this solar-powered generator is a power beast. It has 2000wh battery capacity and six 2000W AC outlets — that’s right, six. The max solar input it can handle is 700W with multiple solar chargers, meaning with solar-power charging, the battery can be replenished between three and four hours, and even faster through outlet charging. It has a bunch of charging capabilities with lots of AC outlets, USB ports and DC outputs. It’s definitely a hefty price tag, but it’s powerful enough to charge appliances when you’re out of power, so it’s certainly worth the investment. 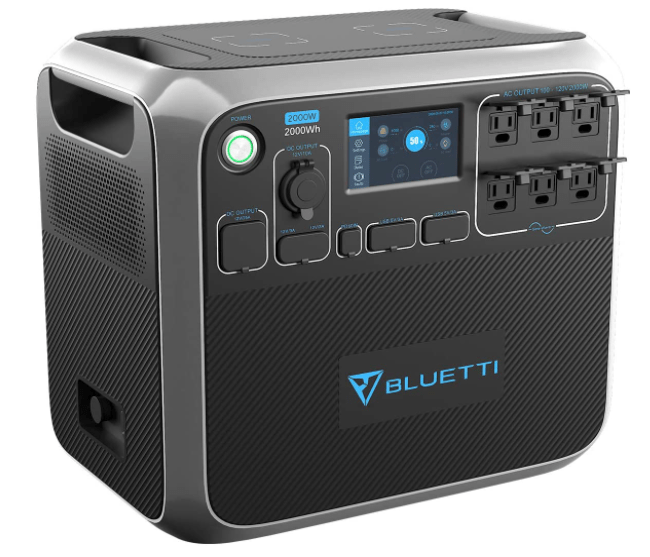 This compact solar generator holds up to seven days of power for smaller home appliances thanks to a 1002Wh battery capacity. It boasts three AC outlets at 110V or 1000W (2000W surge power), as well as two USB-C outputs, two USB-A and a car outlet. At 23 pounds, it’s not too difficult to lug around. It’s an impressive solar generator that has over 100 ratings and 4.5 stars on Amazon.

Need a little power to fire up your toaster oven or blender in the morning, or need to check your emails while you are camping (not recommended)? The Goal Zero Yeti has 400Wh of stored battery power and 600 watts of output. It’s compact enough to keep in your car or stored in a cupboard in your RV but has enough power to keep your small appliances operational when you need them. It doesn’t make a peep when in use, and it’s virtually zero maintenance when stored away. A solid choice for small gadgets and appliances. 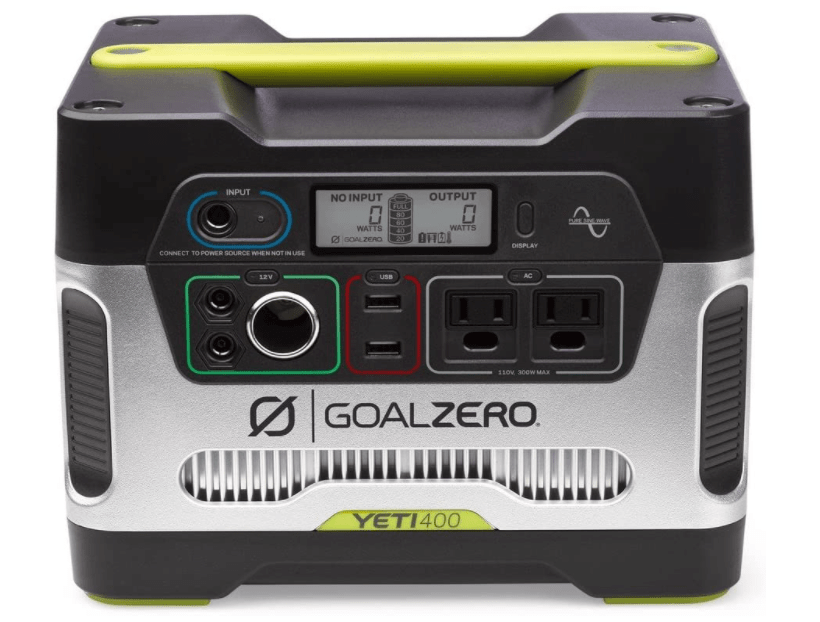 The Aimtom 540Wh solar generator is as affordable as it is portable. Weighing in at 11 pounds, you can move this generator wherever you need with one hand, and since it’s only 10.2 x 6.69-inches, you can store it just about anywhere you need as well. With one USB-C port, two USB-A ports, two AC ports and two DC ports, all of your small device charging needs are covered. Plus, it can even charge your devices while the solar generator charges itself. 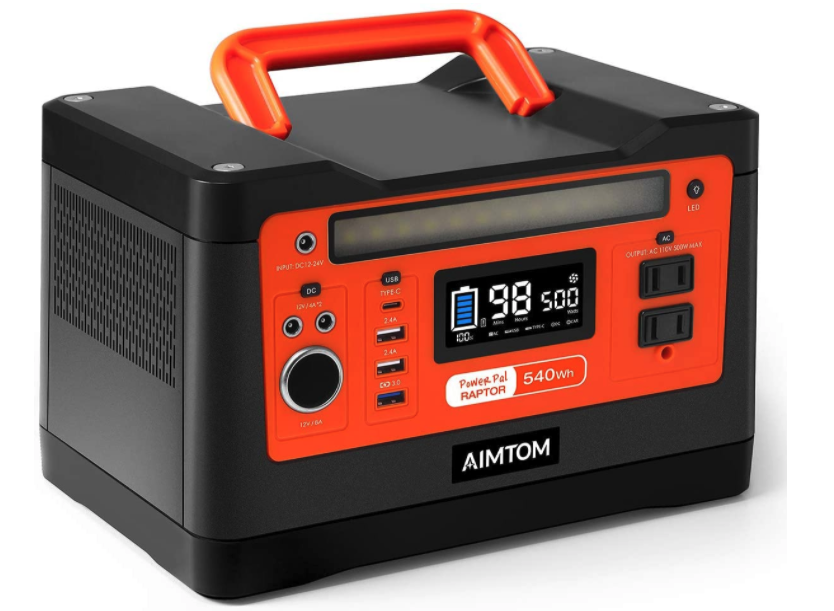 It’s only a 200W/230Wh solar generator, but it’s great for powering small devices while you’re out on the road, and even keeping a refrigerator running for a little while in a pinch. On the front, there are three USB ports and one USB-C with an AC outlet on the side. Its tiny frame makes it a great backup plan on a quick road or camping trip without taking up too much valuable room. And it won’t cost you too much of that hard-earned cash. 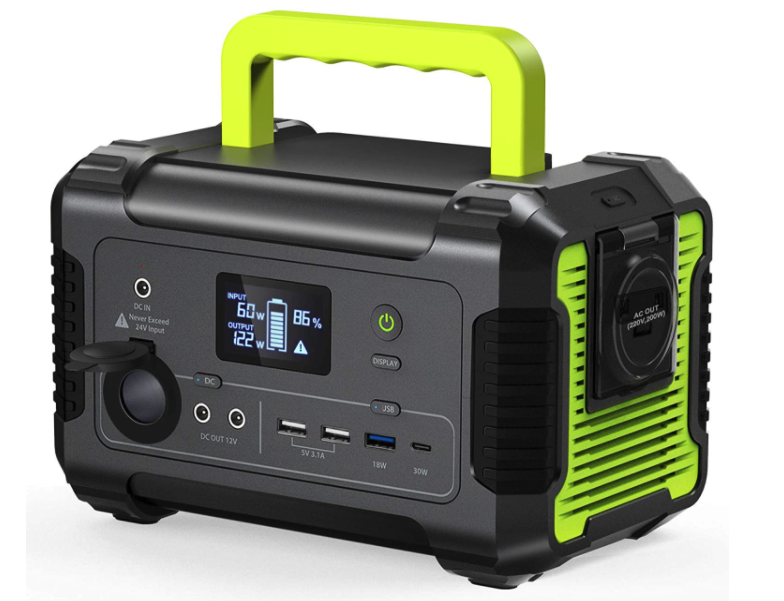