With so much competition in the television space nowadays, every company is incentivized to elevate its game. In short, the parity between each brand is about equal — unless the company is Sony, which continues to put out some of the best TVs on the market. Sony sent one of its newest releases, the X90J 4K BRAVIA Television, to SPY for review. We put it through its paces and had plenty to say about it.

The X90J is a part of the brand’s beloved BRAVIA line of units and functions as a kind of entry-level Sony television. Price-wise, it’s undoubtedly in the upper portion of 4K TVs, but in the lower echelon of units, the brand produces. Nevertheless, there are still plenty of fantastic features included in the television, even for what’s considered “low-end” by Sony standards.

Setup of the X90J is pretty standard to most modern TV sets; once you remove the box and place it in your space accordingly, you’ll walk through a series of prompts to connect it to the Internet and install your various connected apps. The unit leverages Google TV as its built-in interface, making Sony one of the only companies to use the software. As far as an operating system goes, Google TV works pretty well, allowing you to customize a handful of shortcuts for your favorite applications while leveraging voice control through the included remote. The home screen can be a little cluttered, but it was a breeze to navigate once I pinned my favorite apps.

As for the picture quality of the unit, the image is a beauty. Sony leverages full-array local dimming (portions of the screener are lit independently, which results in a much more accurate and overall better contrast), which dramatically improves the overall look. The resulting picture is richly textured, with deep blacks and vivid colors that are great for all kinds of media — but especially when it comes to gaming. The unit is designed to work hand-in-glove with the Sony PlayStation 5, as there’s a dedicated 120 Hz HDMI 2.1 input that allows a 4K input at this speed (i.e., 4K output at 120 frames per second). Granted, this is assuming you’ve been able to get your hands on a PS5, to begin with, but it does elevate your gaming experience with the console if you have one; testing the X90J with my PS5 by playing Ratchet & Clank: Rift Apart was, frankly, a transcendent gaming experience. Xbox Series X owners will also be able to take advantage of the increased 120 Hz, making this TV extremely easy to recommend for next-generation gamers.

In fact, everything about the X90J is meant to be as future-proof as possible, thanks to those previously mentioned HDMI 2.1 ports. Basically, if you need a 4K TV for next-generation gaming consoles and want a TV that will last as long as the console life of the PS5 and the Series X, you’ll be in luck.

As with most TVs nowadays, the viewing angles on the X90J could stand to be improved. Again, this issue isn’t Sony specific, but worth flagging nonetheless. Additionally, the space wherein I installed the unit encountered a noticeable amount of glare. Moving it helped a little bit, but you might find it difficult to view the screen in decidedly bright spaces. In addition, if you’re looking for a truly 100% future-proof TV, then you might be tempted by an 8K display or premium OLED TV.

For other users, we know that $1,000 is the upper limit of your price range. The 55-inch model we tested is currently priced at $1,098 via Amazon and other retailers; however, you can find plenty of 4K smart TVs from Amazon, Samsung, Vizio and TCL in the 65-inch range for $500-$1,000. Of course, these TVs can’t compete with the picture quality of the X90J, and Sony TV’s have a reputation for longevity that justifies the higher cost.

The X90J is a TV that’s decidedly built for now, but not without losing sight of what the future may bring. Gamers, in particular, will get a lot of value out of the increased framerate abilities, while those who love streaming shows will enjoy a vivid picture with stunning clarity. Those looking for an upgrade to their existing TV should start their search here before going elsewhere, as the unit is well-suited to being a modern-day Swiss army knife, capable of providing superlative performance in just about every category.

Where Can You Buy the X90J?

Sony’s LED BRAVIA TV is widely available and can be purchased at retailers like Amazon, Walmart and Best Buy. Since this TV was originally released in 2021, all three retailers have discounted the price of the 55-inch model to $1,099. However, you can spend $100 and get the 65-inch version for just $1,200 via Amazon right now. In addition, if you want to save some money, Best Buy has Open Box deals starting at about $900. 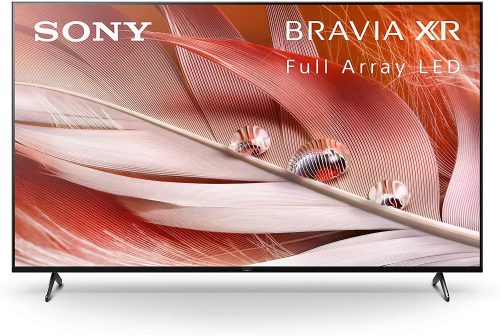