Remember when the Talkboy FX was all the rage back in the 90s? Well, this ain’t Kevin McCallister’s spy pen. The FabQuality hidden camera utilizes powerful 1080P technology to record true HD video discreetly, all in a working pen.

Not only is this camera incredibly useful, it’s also easy to use. Simply use the spy pen to record your footage, plug the pen into your Mac or PC’s USB port with the included USB cable, review the footage and download/discard at your discretion. It’s really that easy.

Add Comment
1 Person Commenting
Jim Frederick
3 years
Plan to buy one of these first thing after I get a laptop. So could use this...

Add Comment
1 Person Commenting
Jim Frederick
3 years
Plan to buy one of these first thing after I get a laptop. So could use this… 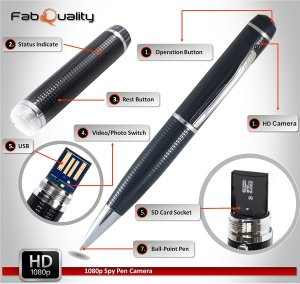 High-quality video capability lets you record at 30 frames per second. It even lets you shoot in impressive 1280×1080 HD video, which is way better than most stand-alone cameras on the market today. It also comes with different video recording modes. You can toggle your spy camera to use the traditional Recording Mode, Motion Detector Mode and more.

One click of the pen instantly starts recording. To turn the camera off, simply click the pen again. A built-in 220mAH rechargeable battery makes it easy to recharge your camera on the go. Best of all, there’s no cumbersome installation or data software needed. If your computer has a USB port, you can connect it to this spy pen.

This Spy Pen Camera is both PC and Mac Compatible. This deal includes seven bonus ink refills for, you know, when you actually want to use the pen as just a pen, too.

The Best Secret Spy Cameras To Get Right Now