Amazon is flexing its smart device prowess. The company is moving beyond smart speakers — while still improving them ­ — and adding their world-class AI to a handful of other devices including cars, rings, earbuds and glasses, just to name a few. Whatever you can think of, Amazon is putting smart technology in it.

Anyone who has an Alexa-enabled device knows how handy the A.I. can be. It’s easy to call out “Alexa, turn the lights on,” when your hands are full with groceries, or “Alexa, play ‘Casey Jones’ by the Grateful Dead,” instead of reaching for your phone and scrolling through your endless playlists. Now, you can have this convenience virtually anywhere. Echo Auto is a small device that brings Alexa into your car. Echo Frames and Echo Loop let you wear the tech when you are out and about. Amazon even released Echo Buds to enter the wireless earbud market that Apple AirPods has been dominating. Amazon is showing the world that there is no reason for anyone to own anything “dumb” anymore.

The Amazon Echo is the O.G. of Alexa-enabled devices, so new generations might not seem as exciting as other Amazon tech, but don’t let the 3rd generation Amazon Echo fool you. The 3rd gen smart speaker is better than ever. The design doesn’t change much from generation to generation, but this new edition boasts a new set of Dolby speakers that deliver 360 audio and sound significantly better than previous generations. The sound quality gets even better as you personalize it to your liking with the equalizer. If you want stereo sound, and you have a 2nd generation Echo around, you can pair the two together for stereo audio. As for the bread and butter of any Amazon smart speaker, Alexa is smarter and more accurate. You can now use Alexa to track your fitness, play games, or disconnect the microphone for added privacy protection. Even though the Echo doesn’t look much different, it is definitely an upgrade compared to previous generations. 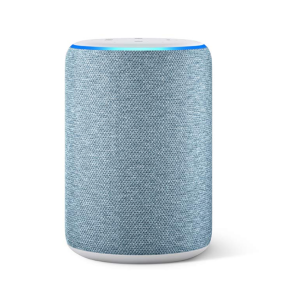 If you want to bring Alexa with you on the road, we recommend the Echo Auto. It is super simple to set up; it connects to your stereo system via Bluetooth or 3.5mm audio cable, which is supplied. Then it snaps on to your AC vents with a little clip. That’s it, that’s the whole setup. The Echo Auto is equipped with eight tiny microphones so Alexa can hear you, even over traffic noise and restless kids yelling in the back seat. You can say a phrase like “Alexa, how is traffic going home?” Alexa will respond with the fastest route available. If you already have an Alexa account, you instantly have access to all of your music like you would at home through your Amazon Echo.

One inconvenience is getting directions as you drive. Since there isn’t a screen, if you ask “Alexa, give me directions to (name that new restaurant you’ve been dying to try),” you’ll receive a notification on your phone through the Alexa app with directions. It won’t simply tell you. That’s a bit of a bummer. But being able to dictate in the car, and having access to all of your Amazon account features while on the road makes this an awesome piece of tech from Amazon. 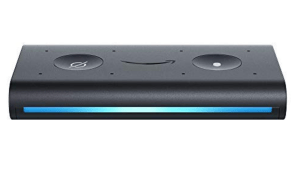 The new Amazon Fire Stick has some small but important upgrades. The remote control now features volume, mute and power buttons. Anyone that has ever lost the remote to their TV and use an Amazon Fire Stick to stream content know how welcome these new volume buttons are to the remote (the struggle is real). The new Fire Stick now has support for HDR10, Dolby Vision and HDR10+. With a compatible TV, this enables the new Fire Stick to deliver the best picture quality while you watch. Dolby Vision and HDR10+ provides deeper blacks and more detail in bright images. Anyone who doesn’t want to skimp on picture quality will be happy for the additions. Overall, the additions to the new Amazon Fire Stick aren’t revolutionary, but they are certainly worth the upgrade. 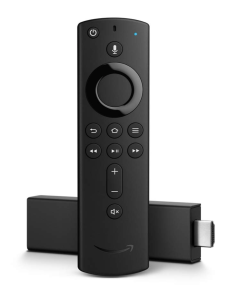 We’ve heard about smart watches and smart glasses, but what about smart rings? The Echo Loop is the newest wearable smart tech to reach our hands (literally). This smart ring lets you take Alexa wherever you go. Unlike other Alexa devices, it isn’t controlled by the “Alexa” wake word. Instead, it is controlled by a small button on the bottom side of the ring (palm side of your hand). After you press it, you hold the ring up to your mouth and ask it a question. Then, you’ll hold the ring up to your ear and get a discrete answer that only you’ll be able to hear. Because of the location tracking on the Loop, you can ask your ring to remind you to take out the trash when you get home, and when you arrive, the Loop will alert you. It’s a small and discrete way to have Alexa in the palm of your hands at all times. Currently, it is only available through invitation, but anyone can apply to get an Echo Loop. 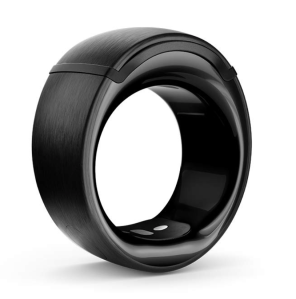 Looking for a cheaper alternative to Apple Airpods? Amazon has you covered with the new Echo Buds. They are about $70 dollars cheaper than Airpods, but provide true wireless capabilities. The two buds are completely independent from one another — there isn’t a wire connecting the two like many “wireless” Bluetooth earbuds. The Echo buds deliver strong sound quality along with noise cancellation to block out distracting outside noise. If you want to be a bit more aware of your surroundings, you can turn on the “passthrough mode” to be able to hear what is going on around you with your Echo Buds still in. One especially great feature is that Amazon doesn’t tie you to Alexa. You can use Alexa, Siri or Google Assistant with these Ear Buds making them all the more special. These are a steal considering the price and all of the features. 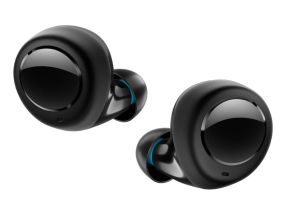 When you think of smart glasses, you might have the idea of futuristic frames with the lenses doubling as screens. The Echo Frames aren’t that. Instead, the glasses look, well, like normal glasses. The two arms that go around your ears are a bit thicker to hold the microphones and speakers to talk to and listen to Alexa. The lenses are just lenses — no crazy screens or cameras with facial recognition technology. You activate the glasses by pressing the button on the top of the right arm and double tapping the button will deactivate the microphone. Once activated, you have Alexa with you wherever you are. It’s a little more convenient than the Echo Loop, since the glasses are on your ears, you can hear Alexa’s response to your inquiries without having to bring your hand to your ear, like the Loop. The glasses connect to your phone via Bluetooth and last roughly 14 hours on a single charge, so you can wear them all day and charge them at night. Like the Echo Loop, these aren’t available for mass consumption quite yet. You’ll need to request an invitation on Amazon’s website.

If you wished your Amazon Echo had better sound quality, then you’ll want to look at the Echo Studio. The Echo Studio is the high-end speaker in the Amazon smart speaker line. There is all sorts of audio tech built into the Echo Studio including Dolby Atmos 3D Audio, which provides a unique immersive audio experience you wouldn’t expect from a smart speaker. The immersive audio is provided by the five drivers built inside of the Studio. Two of the mid-range speakers send audio left and right while the third aims upwards, which gives the audio the unique 3D sound. The 5.25-inch subwoofer fires downward to help give the studio fat bottom end sound, while the tweeter delivers clear high frequencies. Needless to say, this small speaker gets surprisingly loud. Like the Echo, you can pair it with another Studio for true stereo sound. You can also pair it with your Amazon Fire Stick and use it as a sound bar for your home theater. It’s a versatile smart speaker that comes with all the A.I. perks that Alexa boasts. If you love your Echo, you’ll really love the Studio. 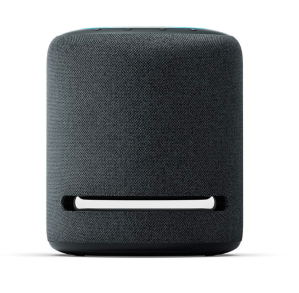 The Echo Show 8 is smart display that can be your personal assistant, especially in the kitchen. The 8-inch display features an anti-glare screen, so sunlight won’t washout the screen. Like the Echo, the Show 8 has all of the Alexa features that we’ve come to expect from Amazon. What makes the Show 8 different is the partnership with the Food Network. You can call upon Alexa to show live and on demand cooking classes from the Food Network from popular chefs such as Bobby Flay and Alton Brown. While you are watching the class, you can also ask Alexa about the ingredients for the recipe. For example, you can say “Alexa, how much beef broth do I add?” Alexa will not only provide an audio response, but the answer will also be displayed in the corner of the screen in text form. These little tricks make it a really handy assistant, both audibly and visually. 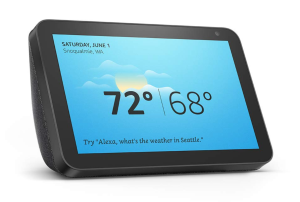 Amazon purchased Eero earlier this year and is now integrating its A.I. into the Eero WiFi Router. With your phone handy, you can set up the router in just a couple of minutes. The router will cover about 1,500 sq. ft., but if you need a little extra, you can pair it with a pack of eero WiFi extenders to get coverage in larger houses or houses with notorious dead spots. What really makes this router unique, though, is the ability to manage your network with voice commands. You can stop sending WiFi to connected devices and choose to send more bandwidth to others, for times when you’re gaming and might need a little extra bandwidth. All that being said, it also looks fairly sleek in your home. It’s not an eye sore like other routers and modems, so you won’t need to feel like you need to hide it in your home. It’s a strong router that leaves a tiny footprint. 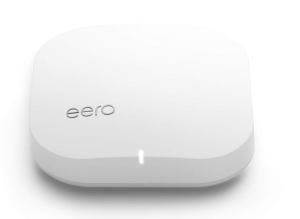 Echo Flex brings Alexa into every room in your home. The small smart device doesn’t have any cables or wires hanging from it. The box simply plugs directly into any power outlet and provides Alexa access points throughout your home. It has a small speaker that is optimized for Alexa’s voice, but not optimized for music, so we wouldn’t suggest trying to bump your tunes through the thing — you wouldn’t be pumped. However, the device brings smart home capabilities to any room and takes up virtually no space. It features a USB port on the bottom of the box to charge your phone or other device without having to take up another power outlet. You can also plug a little motion sensor and smart light into the bottom of it. This is great for bathrooms or the children’s room for night lights. It’s a small little device that adds the convenience of Alexa throughout your home. 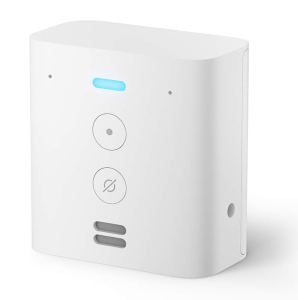 This Top-Rated Action Cam is Only $60 on Amazon