Are you over the WiFi dead zones in your home? It’s like the digital yellow spot on your wireless internet lawn that won’t seem to turn green no matter how much you water it. Though they’re an easy target to blame, the cause of the dead zone might not be your router’s fault. Bigger homes and old apartments with brick, steel, plaster, and other impeding structural features, could very well be the cause of your dwindling WiFi signal. But you aren’t going to move because the WiFi signal in your home is lackluster. Luckily, there is a solution; the best mesh WiFi routers can replenish that yellow spot in your digital yard with glorious vibrant, green, full strength WiFi grass from end to shining end.

Ok, enough yard talk. So, what is a mesh WiFi router? The best way to think of it is to compare it to a multi-speaker system in your home. The device playing music, such as your phone, tablet or computer, is like the router, while the speakers that are evenly spreading music throughout your home are the nodes in a mesh router system. Except the WiFi signal jumps from one node to another, helping spread a strong signal across your home. This helps the node farthest from the main router to spread strong WiFi throughout the house.

And don’t worry about complicated installations — mesh WiFi systems were created with the user in mind. Most of them have phone apps to help walk you through the setup. They will even tell you where to place each node in your home for maximum WiFi coverage. You don’t have to be a tech savant to get great WiFi signal throughout your home. Most of them look fairly sleek, too, so you don’t have to worry about hiding them throughout your home like easter eggs.

Below are some of the best mesh WiFi systems we found to get you the best signal coverage throughout your home.

If you are looking for great internet coverage, and a simple installation process, this is the mesh router that you want in your home. The Netgear Obri RBK50 has been tested to successfully spread WiFi throughout a 5,000-square-foot home. The installation is as simple as putting the base where your internet connection is and then puting the other in the middle of your home. That’s literally the all you have to do. The two unit configuration does better at spreading strong WiFi signal than most mesh routers do with three units.

And if you live in a gigantic household, it works just as well. The Netgear Orbi is easily expandable. You can add another node to the system and configure the system just as easy as the two node setup. On the back of the hub, you’ll find four ethernet inputs and a USB 2.0 port. This will make anyone with a slightly more complicated home network happy to find an influx of ethernet ports on the back. Most mesh WiFi routers feature only one. Amazon user reviews suggest overall great experiences with the router. Only a small percentage have experienced disconnecting issues, but 81% of 4-5 star reviews suggests that this is a great buy. 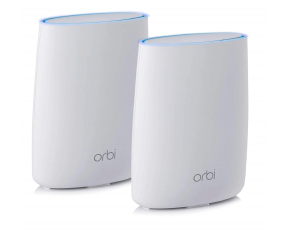 Google’s mesh WiFi system is one of the most sought after mesh systems around. If your apartment or townhouse is experiencing dead spots in internet coverage, you can opt for the single unit Google router which will only run you about $100. If you need a little more juice, the 3-pack provides excellent coverage for small to medium sizes places. The setup isn’t as simple as the Netgear Orbi RBK50, but it’s close. Using the free mobile app, you will need to scan the QR codes on the bottom of the router, and any additional nodes to help the system configure. Then you can name the individual nodes. The app also allows you to see who is connected to the internet and where. You can grant and deny access to anyone in your network. So, if little Timmy has been marathoning too much Netflix, you can take control of his access.

You can also prioritize internet access throughout the system. So, if you need a little more WiFi speed while you game, you can prioritize the node that is closest to you. It won’t provide you as good as WiFi performance as the Netgear Orbi, but it’s a great internet solution, especially if you like having all of your components within the Google ecosystem.

The TP-Link Deco two-piece system doesn’t provide the throughput power like Google WiFi or the Netgear Orbi RBK50, but the single, double and triple node system are more inexpensive than the former, so you can get good WiFi coverage in your home, without forking out too much cash. Like the previously mentioned devices, the installation is simple, so even the least tech savvy person can get these functioning fairly quickly. You will need to download the accompanying app, and register for an account, but the installation is still simple.

The app provides network security options including who is on the network, as well as parental controls to help you keep an eye on what your kids are viewing. Each node has two ethernet ports, providing extra connectivity for those who are looking for a wired connection close to a node.  The performance in really big houses just isn’t great with this system though, even with the three node unit. For bigger home arrangements, you’ll want to look at the Linksys Velop AC3600. 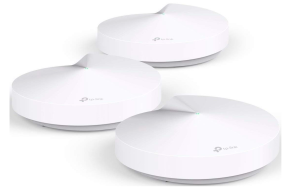 The Linksys Velop can be sold in a single unit, two or three pack, depending on the size of your home and how much coverage you need. The mesh router system is a tall white tower, and each node looks identical to one another. On the bottom of the tower you’ll find a power button and two ethernet ports, for those of you out there that still believe in a wired connection. The setup process is simple and should only take 5-10 minutes. You’ll have to download the Linksys app on your phone to begin the setup. Like the TP-Link Deco installation, you’ll need to create an account and register the first node. After the step-by-step process is complete, you’ll follow the same instructions to install each node in the system.

What’s nice about the app is that if a node fails, or turns off for any reason, you’ll get a notification on your phone telling you which node turned off. The app has a handful of WiFi features including bandwidth prioritization and some parental controls, although, it’s not an extensive list of parental features. The true bread and butter lies in the performance. The signal strength provided by the Linksys Velop rivals the Netgear Orbi RBK50 wireless router. Large homes with funky layouts need a strong mesh router system to get signal to hard to reach places, and this one does exactly that. 82% of Amazon users give this a 4 or 5 star rating for WiFi strength, and overall ease of use. So, if your big house has dead spots throughout, we recommend going with this unit. 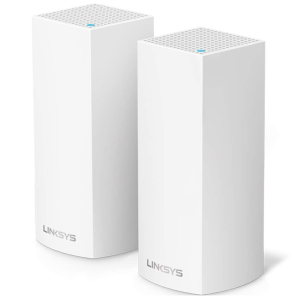 There is a ton to like about this nifty mesh router system. From the sleek design to the intuitive app, it’s a smart choice, especially when you consider all of the features. The hub, or router is a bit bigger and more rectangular than the nodes (or beacons as the company addresses them). The hub has two ethernet ports, while the nodes are strictly wireless. The satellites plugs directly into the wall, and have a nightlight that can be controlled with the phone app, which is a neat little feature.

The app is about as intuitive as any on this list. The internet pause feature makes it easy to simply “shut off” the internet come dinner time, or you can program the app to schedule an internet pause for a specific time of day. For an additional cost, you can buy additional parental control features, but we feel what’s on the app is enough for most users. Even without all the nifty features, it is a solid WiFi mesh router system. It works well in both smaller and bigger houses, and it is expandable, so you can add other nodes to the system as you need. It doesn’t boast as much signal strength as Netgear or Linksys systems, but for the combination of all the things you get — a sleek looking system, nodes that plug into the wall, a great application — it’s a solid mesh WiFi system. 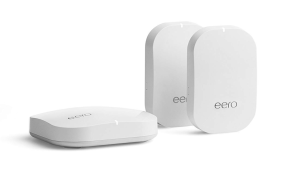 Courtesy of Amazon
Buy: Eero Pro Mesh WiFi System $399.00
buy it
Want a Reliable Computer? Here's Why Reviewers Are Down With Dell