I have reached an age where I can safely say that I do not like the heat, and I never will like the heat. Mostly because heat does not like me. I have lived in some very hot places (Florida, Texas and now Arizona) and if I had a dollar for every time someone told me I was going to get used to the heat, I would have enough money to invent an air conditioning suit that I could wear at all times. Great idea, right? Please, someone, steal this idea and make it a thing. I won’t sue for copyright infringement, I promise. A 20 percent off code and free shipping will suffice.

Anyway, the heat and I have a mutual hatred. I have suffered from heatstroke numerous times in my life, including fainting during the finals of a Track and Field meet and in the middle of a wedding ceremony that I was a bridesmaid in. I know, what kind of evil person tries to steal the bride’s thunder on her special day? Me. And the heat. I would also like to mention that the above two instances did not take place in the three previously mentioned hotty-hot-hot states but in my native Canada. Yeah, it gets hot there. Trust me.

So, it should come as no surprise that when TORRAS released their new personal air conditioner, the Coolify2, I was all over that like SPF 50 sunblock on me anytime I leave the house. The Coolify2 has a steep price tag of $179, so I set out to see whether it was worth the big bucks. Curious to hear my thoughts? Read on for my full TORRAS Coolify2 review below.

The Coolify2 arrived with a 75% battery life, so I was able to throw it on and start testing it immediately. The personal air conditioner and heater only has two buttons and it’s easy to move through the settings while wearing the Coolify2. I found it comfortable and easy to wear for an extended period without feeling like I was carrying around extra weight. I also liked that the Coolify2 included a zippered carrying case, but it is quite bulky and would take up a lot of space in a backpack or suitcase. 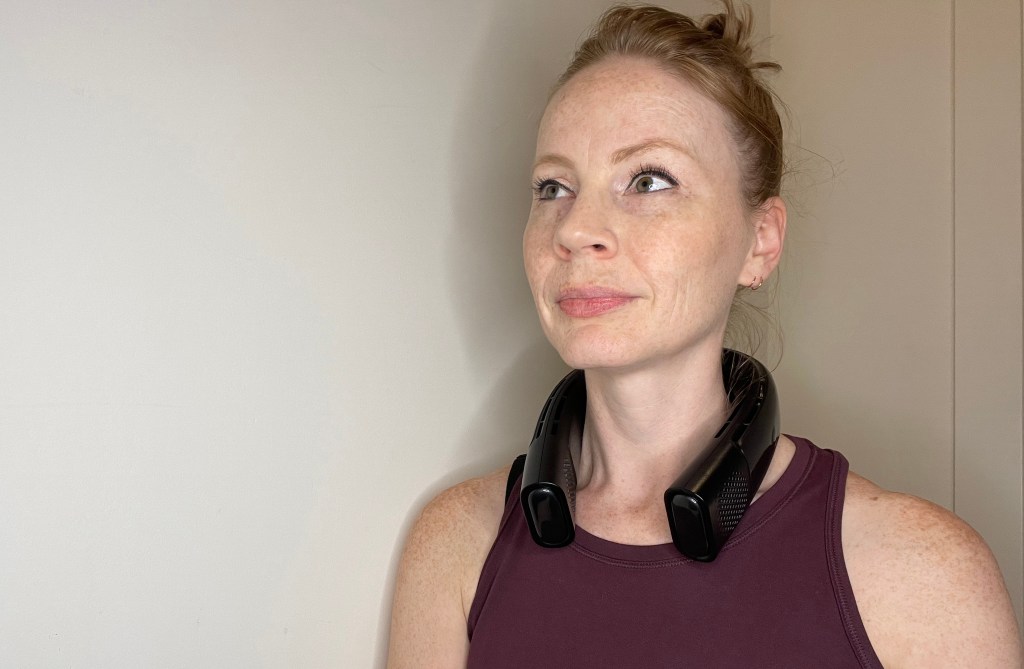 TORRAS claims that the Coolify2 can be worn while exercising and even includes a video of a model running while wearing the unit. I call shenanigans. Low impact workouts? Yes, I’ll sign off on that. I wore the Coolify 2 while doing pushups, squats, lifting weights, stretching and during 30-minute yoga sessions and had no issues. The unit moves slightly when I went from down dog to up dog, but not enough to bother me.

Bike riding, hiking and playing golf are doable with the Coolify2. Doing jumping jacks or running, on the other hand, was a no-go. The sound you hear in the video below is the Coolify2 smashing against my collarbone.

TORRAS also includes a picture of a model on a basketball court while wearing the Coolify2. I tried some side-to-side drills to see whether the Coolify2 could be used while playing basketball or tennis, since both sports have similar high impact bursts, and my collarbone once again took a beating.

Using the Coolify2 is simple. There are only two buttons, one on either side of the unit. The power button lets users move through the three levels for Cooling, Heating and Fan air. A small LCD screen displays which level has been selected and the percentage of battery life remaining on the Coolify2 (this is an upgrade from the Coolify, which only has dots that gradually dim as the battery wears down).

On the other side of the unit is a button that lets users choose whether they want Cooling, Heating or Fan air. That’s it! Users can cycle through the three levels of Cool using the power button, click the mode button once to switch to the Fan, and hold the mode button for two seconds to switch to Heat. I liked that there was no app component or a complicated interface.

The Coolify2 beeps anytime users change the level or mode. This is useful if you’re wearing the unit and don’t want to take it off but still want confirmation that you’ve switched modes/levels. It’s not possible to silence the beeps, which some users may not like.

When used on its highest Cooling level, the Coolify2 did an excellent job providing reprieve from the heat. I first tested it during an outdoor kids’ party on a Saturday afternoon. The high that day was 102 degrees Fahrenheit and I was able to last three hours before informing my three-year-old that ‘mommy needs to leave before she passes out.’ Unfortunately, my Coolify2 only lasted the previously stated 1.5 hours. I probably should have kept it at the second level in order to keep it working longer, but 102 is a level three temperature in my books.

I also wore the Coolify2 during some evening walks. On the Cooling setting, I found level two helped keep me comfortable. The fan also felt like it was blowing cool air, but for the best cooling power, I decided to keep it strictly to the Cooling setting.

Wearing the Coolify2 could dry out your eyes slightly since much of the air blows upwards. I also found that I could only comfortably use the Heat setting on the lowest level. The second and third levels were too intense and left marks on my neck. The first level did feel nice for sore neck muscles and the second and third levels would likely be more useful in cold weather with a scarf or collar acting as a barrier between bare skin and the Coolify2. 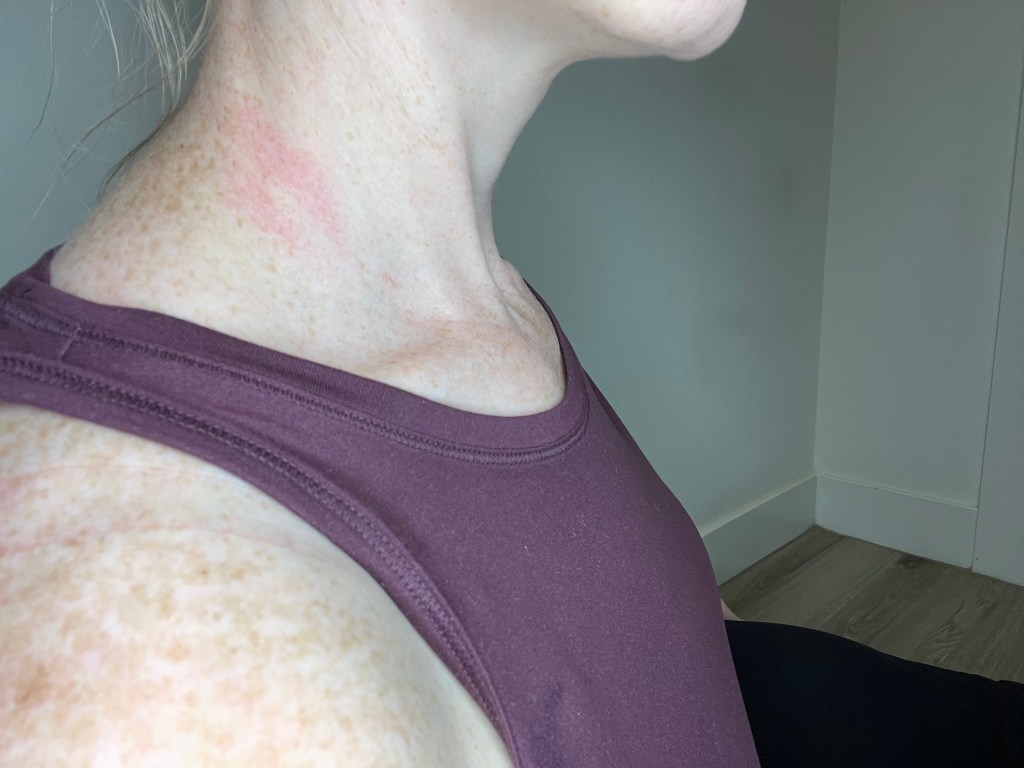 The Coolify2 takes three hours to completely charge, which is a big drawback for two reasons. As mentioned above, the Coolify2 only lasts about 1.5 hours at its highest Cooling level. If I could use the unit for 1.5 hours, charge it in 10 minutes, and then use it again, I could deal with its short battery life. But I can’t.

The other reason the three-hour charge time is frustrating is that the Coolify2 can’t be used while it’s charging. I wouldn’t mind carrying a small power bank in my pocket or backpack to keep the Coolify2 charged while in use because it really did help cool me down. For anyone who has a hot or cold workplace, being able to charge the Coolify2 and use it all day would be convenient and make the high price point worthwhile. Even if you wanted to wear the Coolify2 while watching a baseball game or playing a round of golf, it wouldn’t last at its highest level. Yes, the lower levels did last longer, but for most people who are hot, they would likely opt for the highest cooling setting.

TORRAS does specify that using the Coolify2 on its strongest cooling setting has the shortest life span, so there aren’t any surprises there. I did still find that the Coolify2 provided some relief on the lower settings, and it was quieter, which is useful for people who are wearing the unit while working.

For anyone who needs short bursts (1.5 hours) of intense cooling or a neck warmer for extended use, the Coolify2 is lightweight, comfortable, and easy to use.

Yes, if you want a comfortable neck heater and are okay with the cooling function working only 1.5 hours on its top level or longer at lower levels. 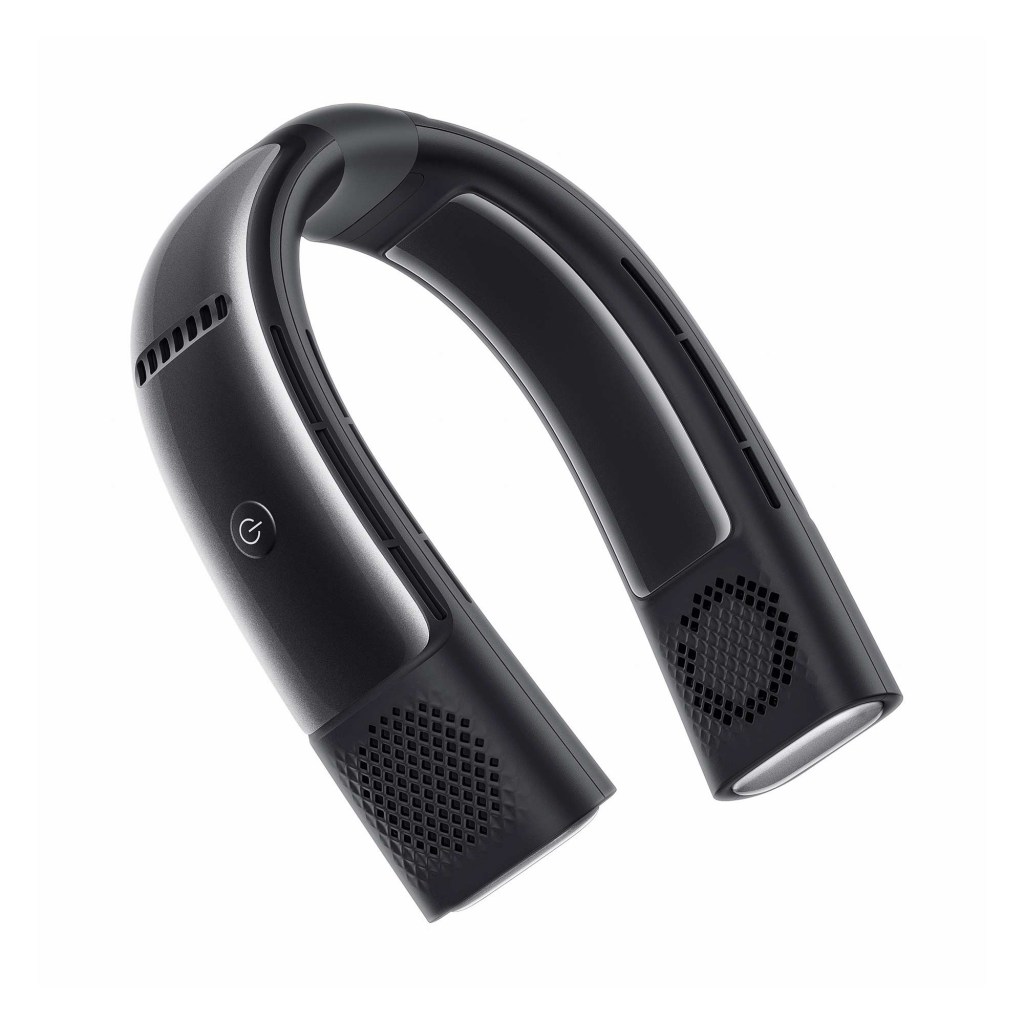 The Coolify2 feels like a high-quality product and TORRAS has been around for a while and in the personal air conditioner market. For those reasons, it feels like this unit will last through several seasons. TORRAS also offers returns on defective units for up to 180 days and returns without reason for up to 30 days.

If you’re looking for some lower-priced alternatives, we have a list of personal air conditioners to check out, including the original Coolify, which is $30.00 less than the new model.

The original Coolify doesn’t have a heating option like the new model, but it does have a shorter charging time at two hours versus Coolify2’s three-hour charge. It can also last three hours at its most intense cooling mode. 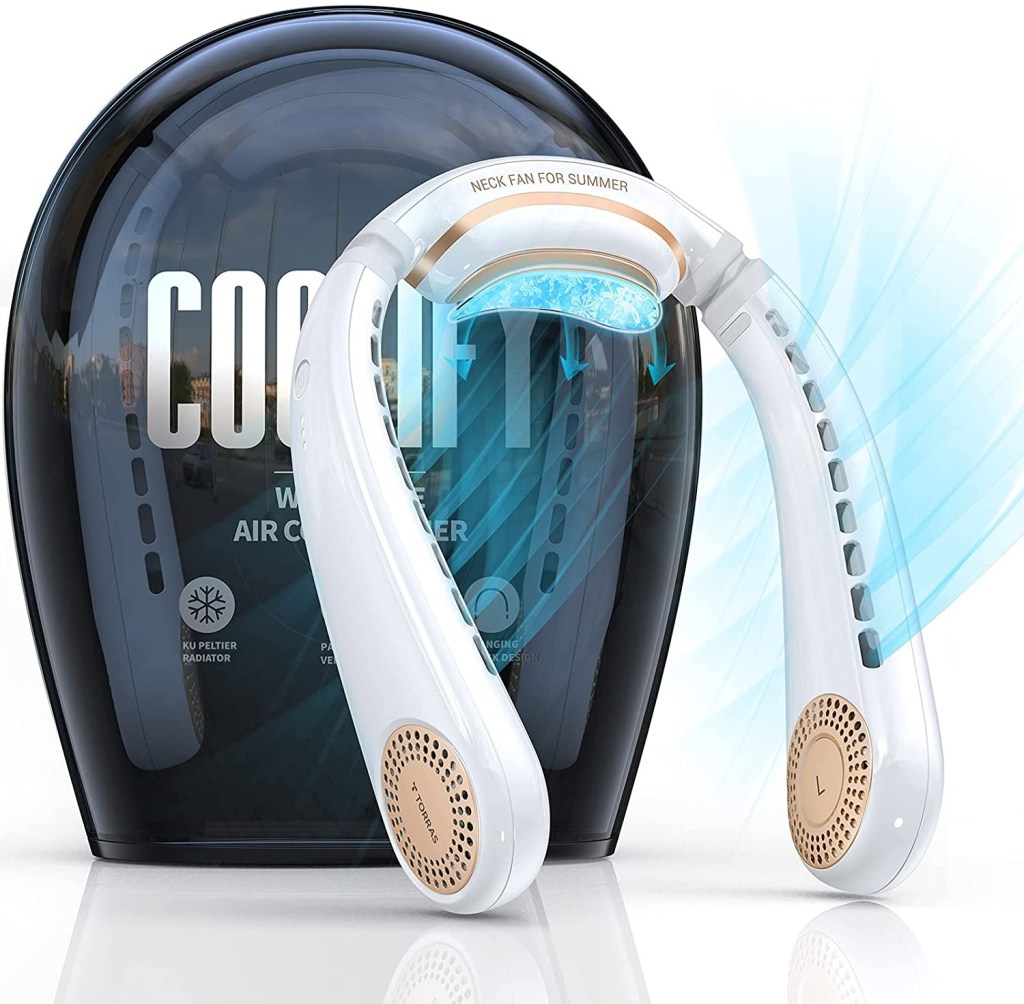 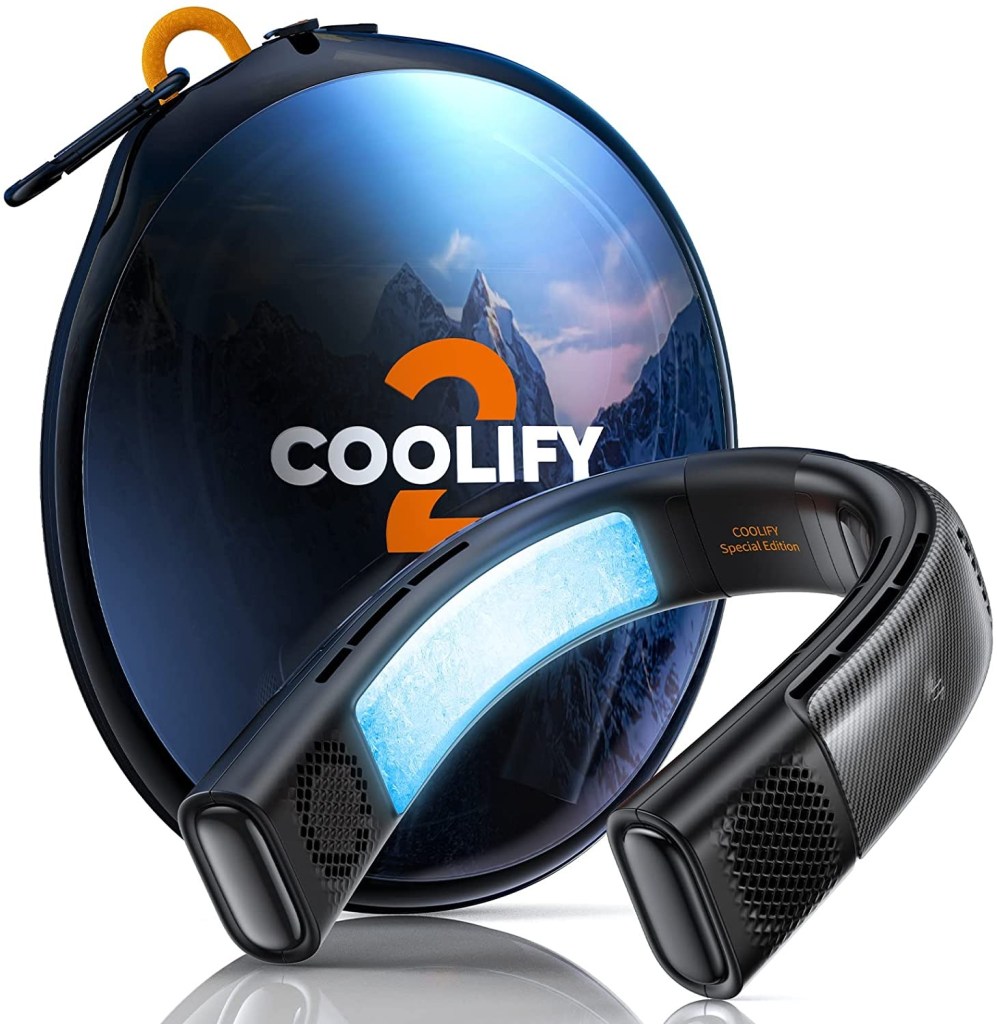